- Cuicul (Djemila): Old Town
(detail of a mosaic at the Museum of Cherchell) 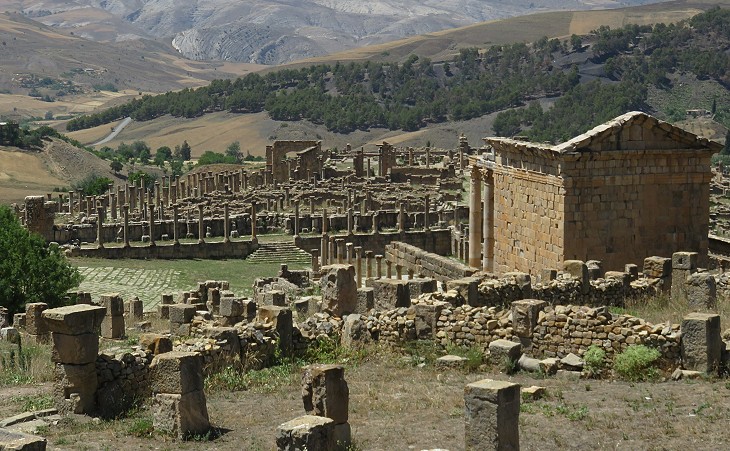 It takes a long time to get to Djemila. It is not a city where one halts, and then goes on. It leads nowhere and opens on nothing. It is a place from which one comes back. (..) When I went to Djemila there was wind and sun but that must wait. What has to be said first is that a great silence reigns there, heavy and without a crack. The cries of birds, the furred sound of a three-holed flute, the stamping of goats, murmurs from the sky - these are so many noises which made up the silence and desolation of the place. Now and then a dry crackling, a shrill cry, mark the flight of a bird that had crouched among the stones.
Albert Camus - The Wind at Djemila - 1936 - translated by Ellen Conroy Kennedy 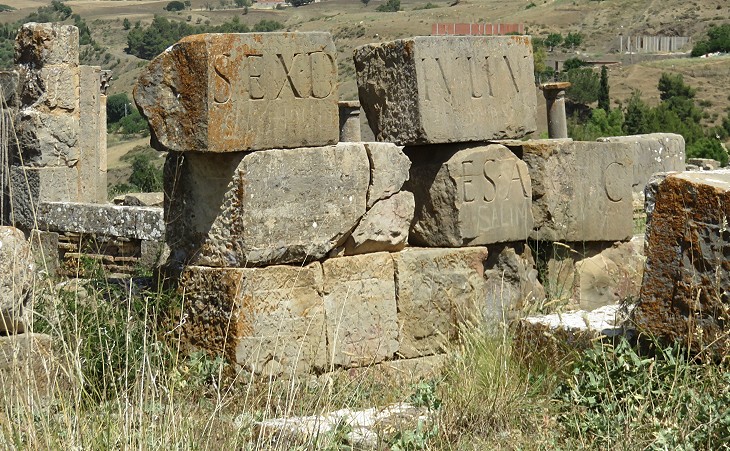 Fragments of a large inscription in the Forum of the Old Town. It celebrates the construction of a basilica adjoining the Forum in 169 AD

In ca 96 AD Emperor Nerva founded a Roman colony of veterans on the site of an existing village already known as Cuicul. It was located in Numidia near the border with Mauretania Caesariensis; its purpose was to control a mountainous region which was crossed by the road between the capitals of the two provinces (Cirta and Caesarea Mauretaniae) and by another one which from the coast reached Lambaesis, a military town in the interior of the country.
The image used as background for this page shows the gravestone of a veteran. 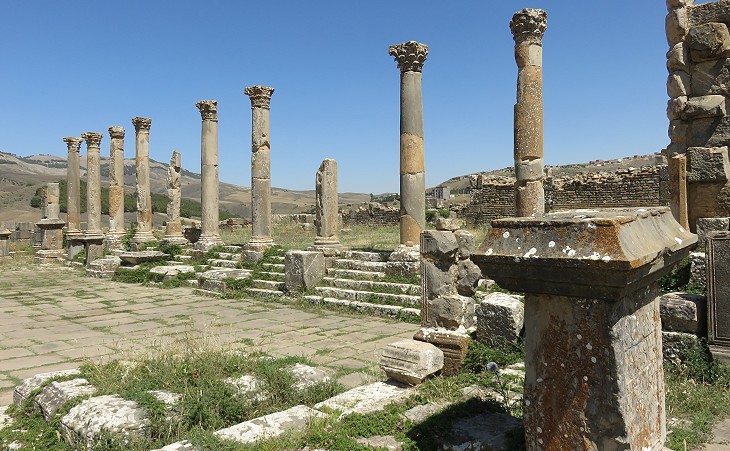 In 1839 Ferdinand Philippe, Duke of Orléans, son of King Louis-Philippe of France, was the commander of a military expedition aimed at conquering the eastern part of Algeria; he noticed the site of the ancient town and he described it as un espace immense couvert de fûts de colonnes, de chapiteaux, de sculptures, de mosaïques (a very wide space covered by broken columns, capitals, statues, mosaics). He was impressed by the remains of a triumphal arch and planned to relocate it to Paris. He died in 1842 and for a very long time the ruins of Cuicul fell into oblivion and were not mentioned in travel accounts.
In 1909, after the construction of a modern road, systematic excavations unearthed the urban layout of the town. Archaeological work continued until 1957 and it led to the reconstruction of a number of ancient monuments. The Forum was placed in the middle of town; the square itself was built gradually during the course of the IInd century and it was bordered on two sides by porticoes. 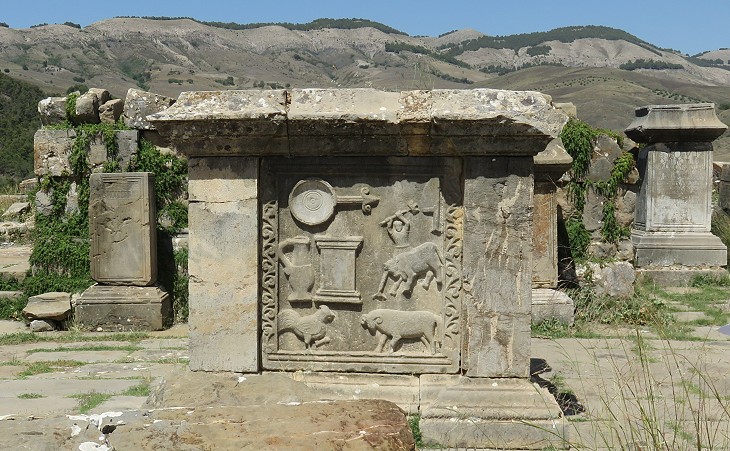 Altar in the Old Forum

The Old Forum had a (lost) Capitolium, similar to many other towns in Roman Africa, e.g. Thugga and Thuburbo Majus. It was a temple dedicated to Jupiter, Juno and Minerva which symbolized the link with Rome where the three gods were worshipped on the Capitoline Hill. A large altar stood in front of the temple and was decorated with a relief showing a suovetaurilia, the sacrifice of a pig (sus, but replaced by a cock in this relief), a ram (ovis) and a bull (taurus). It had a purification purpose (lustratio) and it was celebrated on very special occasions.
Then do thou fix in the earth thy shapely oar and make goodly offerings to lord Poseidon - a ram, and a bull, and a boar that mates with sows - and depart for thy home.
From Tiresias' prophecy to Ulysses - Homer - Odyssey - Book XI - Translation by Samuel Butler
You may wish to see a relief showing the same sacrifice on Arco di Costantino in Rome. 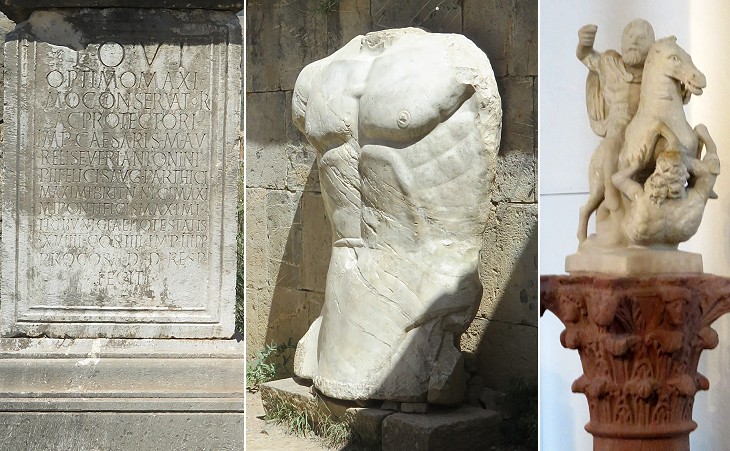 (left) Dedicatory inscription to Jupiter (early IIIrd century AD); (centre) torso of a statue of Jupiter from the Capitolium; (right) Archaeological Museum of Frankfurt (Nida): top of a "Jupitersäule", a column to Jupiter

Jupiter had a pre-eminent role in the Roman pantheon and more and larger altars and statues were dedicated to him in comparison with those to Juno and Minerva. Although he basically represented the supreme authority of the state and was not often involved in wars, over time he acquired the role of a commander. In Germany, a heavily militarized Roman province, he was portrayed in the act of defeating a monster, very similar to St. George. In 287 Emperor Diocletian assumed the title of Iovius to underline his authority. 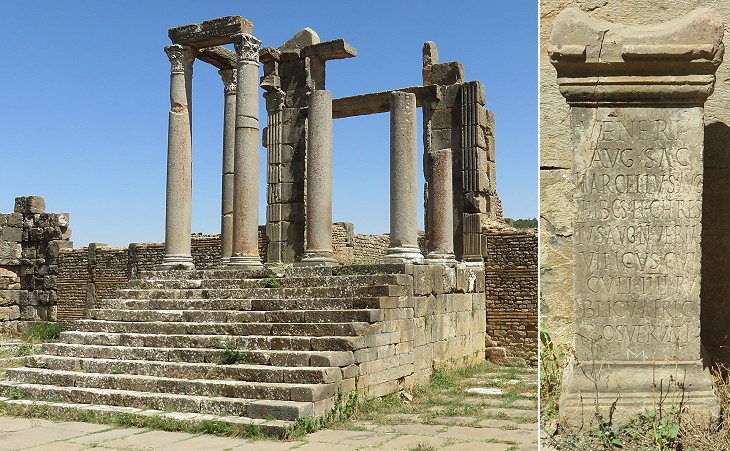 (left) Temple to Venus Genetrix; (right) dedicatory inscription to Venus which at the same time celebrated the construction of public granaries

Another temple near the Old Forum enhanced the link of Cuicul with Rome. It is small, but its design is very elegant and it is one of the finest sights of the Old Town. It was dedicated to Venus Genetrix similar to that built by Julius Caesar in his Roman Forum: Caesar regarded the goddess as ancestress of Gens Julia, his own patrician family/clan. The link was extended to the City of Rome by Virgil who claimed that Aeneas, son of Venus, started the series of events which led to the foundation of the city. In 135 AD Emperor Hadrian inaugurated a gigantic temple to Venus and Rome near Colosseo, thus stressing the role of the goddess as patroness of Rome.
An inscription near the temple celebrates the construction of public granaries, an indication that Cuicul flourished because of its role in the trade of grain between the inland plains and the ports on the coast from where it was shipped to Porto, the artificial harbour of Rome. 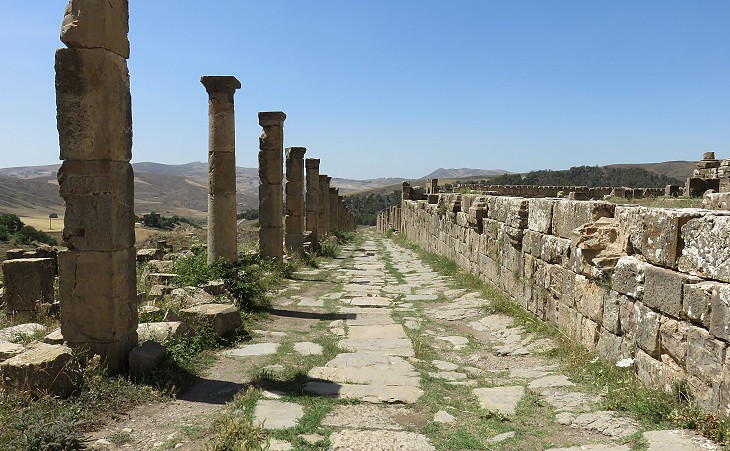 Every road one follows, the paths among the ruined houses, the wide-paved streets under gleaming columns, the immense forum between the arch of triumph and the temple on its hillock, everything leads to the ravines which on every side bound Djemila. Camus
The Roman town occupied a singular defensive position. Cuicul is one of the flowers of Roman architecture in North Africa. Remarkably adapted to the constraints of the mountainous site, on a rocky spur which spreads at an altitude of 900 m, between the wadi Guergour and the wadi Betame, two mountain torrents, the town has its own Senate and Forum.
From the 1982 UNESCO brief synthesis of the outstanding universal value of Djemila.
Notwithstanding the morphology of the site the town has a typical Roman urban layout with straight streets; the two ravines limited the length of the decumani, the east-west streets, but Cuicul was crossed by a very long Cardo Maximus which gently sloped in a south-north direction. It was the typical grand colonnaded street which was the pride of so many Roman towns, although it did not reach the length of that of Apamea. 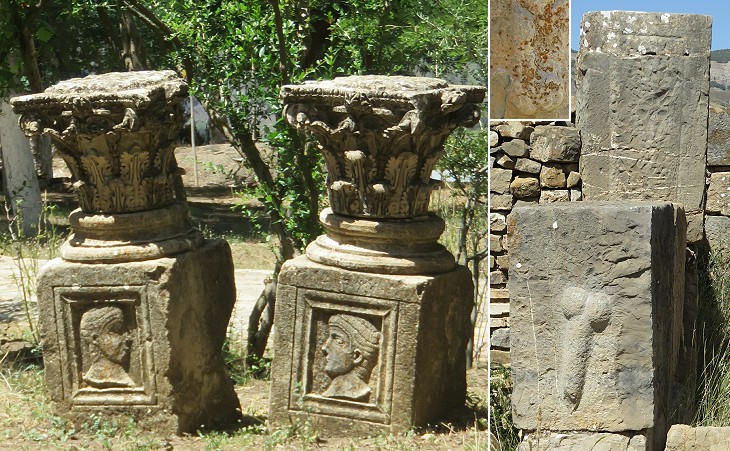 (left) Capitals and other decorative elements in the garden of the Museum of Djemila; (right) phalli on houses along Cardo Maximus (see a similar one at Volubilis in Morocco)

Travellers coming from the coast entered Cuicul from the northern section of Cardo Maximus and it is possible that they soon noticed signs indicating the existence of brothels. Phalli however did not indicate necessarily the existence of a brothel unless they were accompanied by other supporting elements as at Pompeii. They were a very common apotropaic (averting bad luck) symbol in the Greco-Roman world; a phallus over the door of an ordinary house had more or less the same purpose as an inscription saying Lord protect this house. 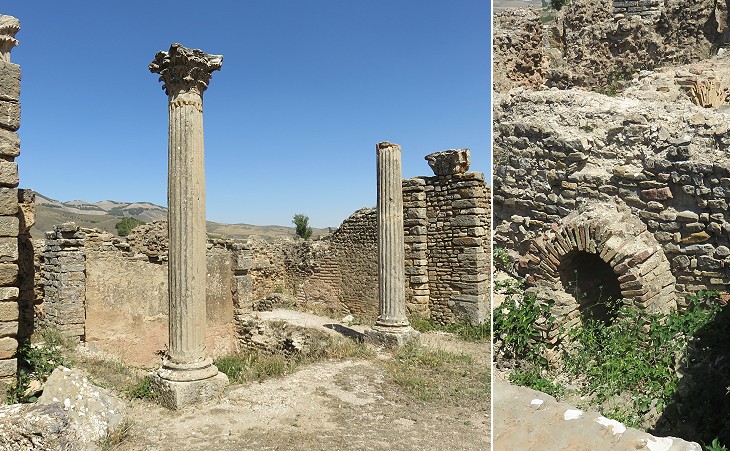 Baths near the Old Forum: (left) one of the halls; (right) the furnace

Travellers from the coast might not have found brothels when they entered the town, but they could rest and wash themselves at a bath establishment between the Old Forum and Cardo Maximus. Archaeologists were able to identify and partially reconstruct some of the halls and of the structures for heating them. They were decorated with some very fine columns and capitals. 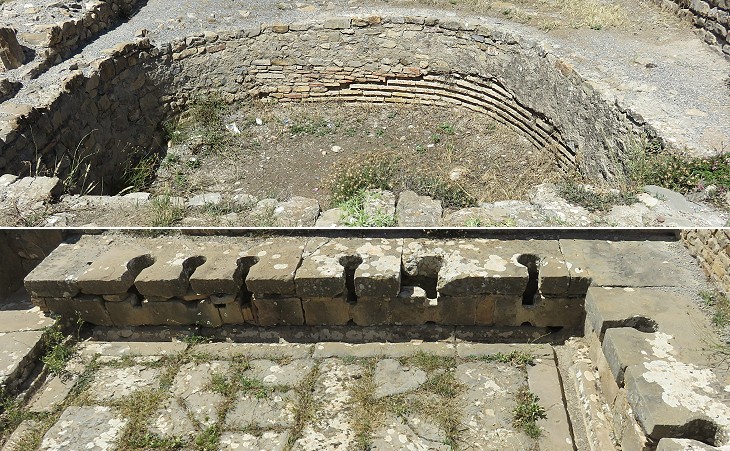 Baths near the Old Forum: (above) a basin of one of the halls; (below) latrine

The Romans developed advanced techniques for building aqueducts and in general for controlling the flow of water. This was the pre-requisite for the design of latrines which had an effective sanitation system. Large facilities with many seats were usually referred to as foricae. Those at the baths were regarded as an additional hall for social meetings and were often decorated with marbles (see those at Sabratha in Libya). Hence we must assume that the flushing system was very effective. 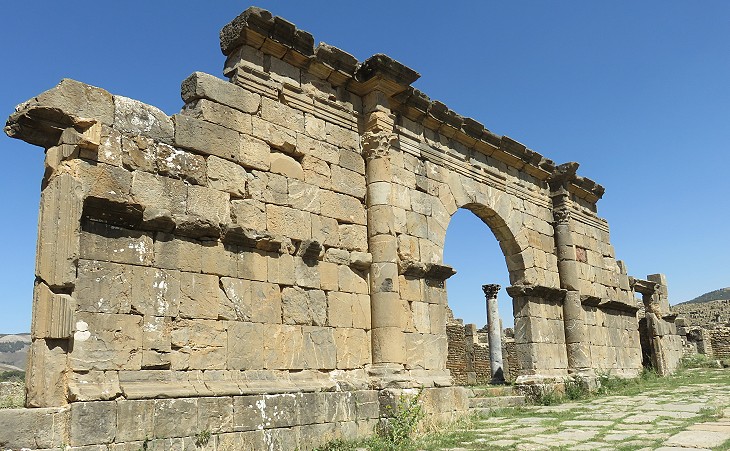 It is likely that initially the forum of a Roman town was also its marketplace. Eventually a macellum, a specific facility for the sale of fish, meat, fruit and vegetables was built in its proximity in order to utilise the forum only for religious and political/judiciary activities. At Djemila the macellum had an independent and imposing access from Cardo Maximus. 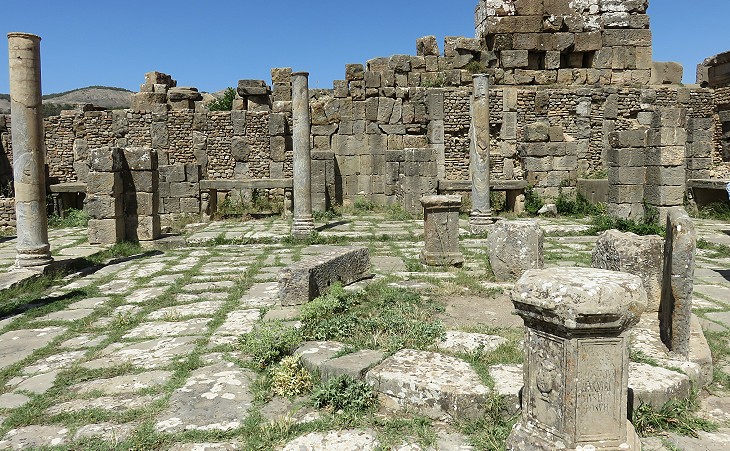 Market of Cosinius: shops and fountain with two dedicatory inscription to Mercury, god of trade (see the Market of Sertius at Thamugadi)

The structure of the macellum is still very evident. A rectangular open air courtyard was surrounded by porticoes which housed sixteen shops. A fountain and sewers made it easily cleanable after opening hours. The design is similar to that of the macellum of Ostia. A more complex and lavishly decorated macellum can be seen at Leptis Magna. 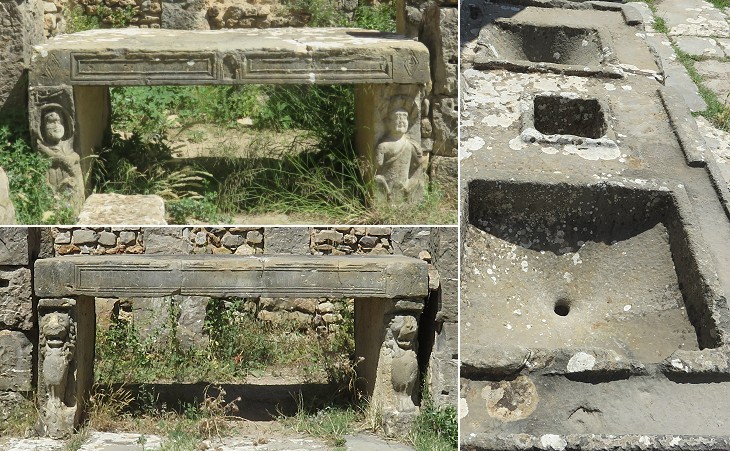 Aediles curules were Roman magistrates who were in charge of public markets, in addition to many other responsibilities. Similar officers were appointed in all Roman towns and their names can often be seen on mensae ponderariae, standard measures of capacities at marketplaces as at Pompeii and Dion. 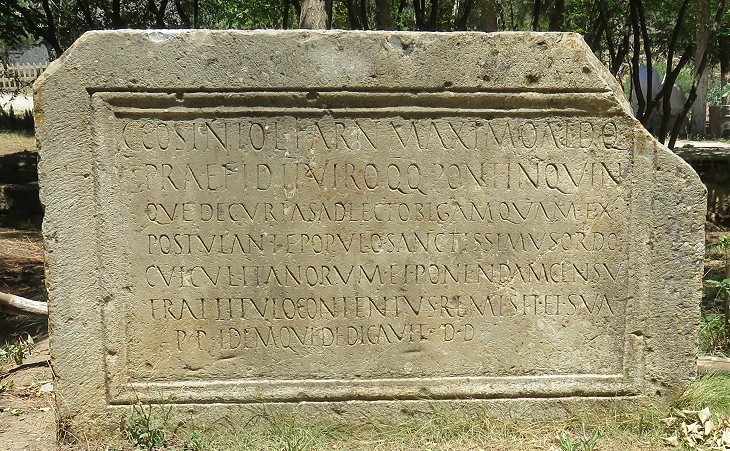 The market was donated by L. Cosinius Primus and C. Cosinius Maximus. The former was duumvir at Cuicul after having held important positions at Carthage, his native town. The Roman citizens of the colony were originally veterans, but very early, if not from the beginning, families from other towns of the provinces of Africa and Numidia settled at Cuicul. 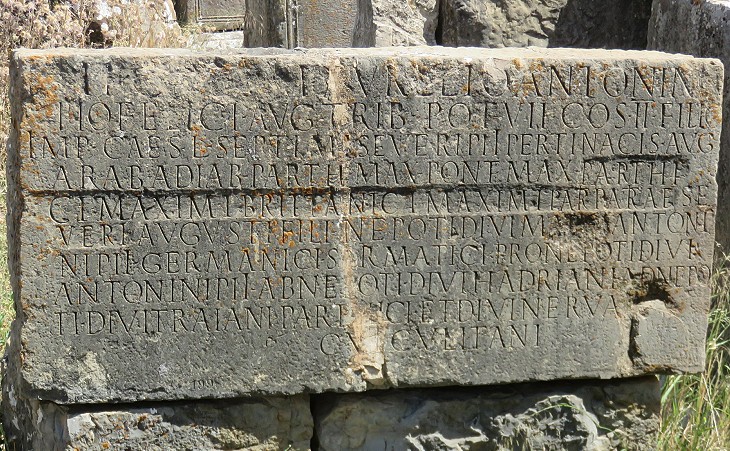 Cuicul flourished during the IInd century and towards the end of it a plan was drawn to expand the town on higher ground to the south of the Old Forum. This development took place during the last years of the reign of Emperor Septimius Severus and the first years of that of his son Caracalla. The many inscriptions which celebrated the initial phases of the construction of the new neighbourhood had to be modified after Caracalla killed his brother and co-emperor Geta in December 211. The above inscription most likely contained the words ET P SEPTIMII GETAE NOBILISSIMI CAESARIS which were replaced by PARTHICI MAXIMI BRITTANICI MAXIMI, two titles of Caracalla, similar to what occurred to the inscription on Arco di Settimio Severo in Rome. Geta was given the title of Caesar by his father in 198.

Move to see the New/Severian Town or the Christian Quarter and the Museum.