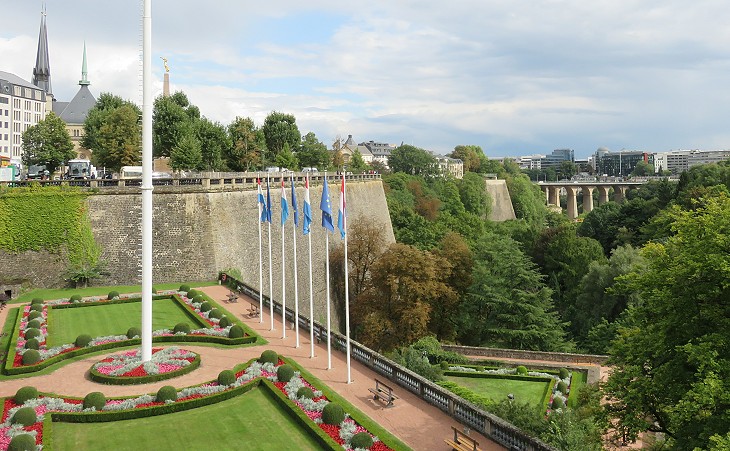 Luxemburg is the capital of the dutchy of that name in the Austrian Netherlands, situated on the river Else, twenty miles south west of Triers, (..) twelve to the westward of the Moselle and one hundred south east of Brussels. The town is small, one half on a hill, and the other on a plain, but it is very strong both by art and nature. It is said to have been built in honour of the sun, from whence it derived its name "Lucisburgum". In general it is but indifferently built, tho' there are some good stone houses in it. There is nothing remarkable in the churches except that of the Jesuits which is a handsome building in the modern taste. Near this city are the remains of a magnificent palace built by Peter Ernest, earl of Mansfields, governor of this province in 1592-1594 with fine gardens, fountains, and statues where the inhabitants take the air in the summer season. This palace was ruined by the French in one of their sieges. The French took this city from the Spaniards in 1684 and made it one of the strongest, if not the very strongest fortifications in Europe, but restored it to the Spaniards by the treaty of Ryswick. They seized it in 1701, after the death of Charles II, king of Spain, but yielded it to the house of Austria by the treaty of Utrecht in whose possession it still remains.
Thomas Nugent - The Grand Tour - 1756 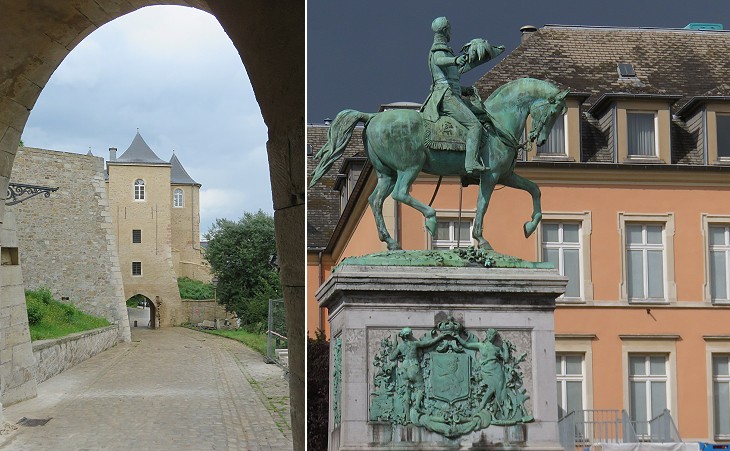 (left) The Three Towers (medieval towers, the oldest one is dated 1200) ; (right) Monument to William II, King of the Netherlands and Grand Duke of Luxembourg in 1840-1849 (a personal union)

The situation of Luxemburg is very singular; and the extent and extraordinary character of its fortifications combine to make it highly picturesque. The traveller from the side of Brussels comes upon it unawares, so completely is it wedged in between high escarped rocks on the margin of the Alzette. On entering from the German side, it is difficult to comprehend how these are to be surmounted, or the drawbridges reached, which appear to hang suspended in the air. (..) The defences, partly excavated in the solid rock, have been increased and improved by the successive possessors of Luxemburg, by the Spaniards (1697), Austrians (1713), French (1684 and 1795), and Dutch, rendering it one of the strongest places in Europe. It is now one of the fortresses of the German Confederation; and is garrisoned by 2000 Prussians.
John Murray - A Hand-Book for Travellers on the Continent - 1838 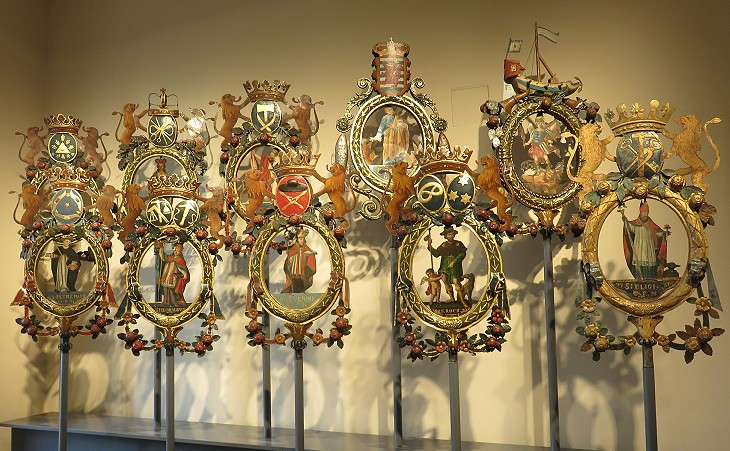 National Museum of History and Art (NMHA): images of the patron saints of the guilds; they were made in 1781 for a special procession on the 100th anniversary of the Virgin Mary's patronage of Luxembourg

The Grand Duchy, of which Luxemburg is the chief town, was given to the King of Holland, at the Treaty of Vienna (1815), in consideration of his abandoning his claim upon Nassau. Murray
The King of the Netherlands was a Protestant and Luxembourg was deeply Roman Catholic. The religious issue caused the secession of Roman Catholic Belgium from the Kingdom of the (United) Netherlands in 1830. In 1870 Pope Pius IX created the Diocese of Luxembourg, which historically was part of the Archdiocese of Trier, to enhance the national identity of the Grand Duchy. In 1890 the Grand Duchy was assigned to Adolphe of Nassau, a very distant relative of the King of the Netherlands. In 1893 William III, Adolphe's son, married Infanta Marie Anne of Portugal who was a Roman Catholic and their children were raised in the mother's religion. The Grand Duchy is still ruled by their heirs.

NMHA: Mosaic of the Nine Muses from a villa at Vichten (found in 1995); see the same subject in a mosaic in Tunisia

It has ever been imputed to Peter Ernest's overweening passion for the "res antiquae laudis et artis" that he entertained a project of transporting the sculptures of the Igel Monument, if not the Pyramid itself in its entire state, into his gardens at Luxemburg, as he had already done with another nearly similar pyramid from Arlon (Oriolaunum). (..) But see the inutility, to say nothing of the mischievousness, of such collections! The whole were dispersed after the death of the Count.
Johann Hugo Wyttenbach - The Stranger's Guide to the Roman Antiquities of the City of Treves - Edited by Dawson Turner - 1838
In 1845 a local Archaeological Society began to collect statues, coins, glassware and other ancient items; in 1868 the State recognized its activity and assigned it a section of the newly founded Grand Ducal Institute, the academy of the country. The current museum originates from that Institute. 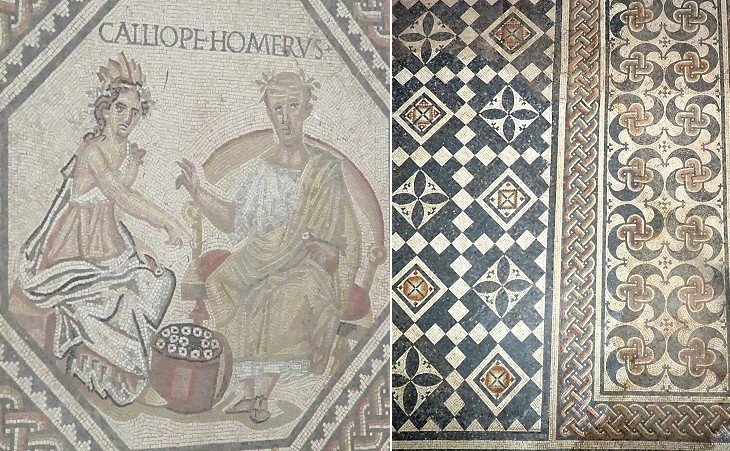 NMHA: Mosaic of the Nine Muses from Vichten (ca 240 AD): (left) Calliope, the Muse of epic and elegiac poetry together with Homer; the Muse points down to a container full of scrolls (see it also in a mosaic at Sousse), while the poet raises his hand in a gesture which attracts the attention of the viewer and which resembles the blessing hand of the Christian iconography; (right) geometric decoration

A major enrichment to the archaeological collection of the museum occurred in 1995 when the remains of a Roman villa were discovered at Vichten, a small town in the centre of the Grand Duchy. A fine floor mosaic was detached and sent to the Rheinisches Landesmuseum of Trier for restoration. It is similar to floor mosaics in that museum and in particular to the Monnus Mosaic which depicts poets and muses. It has a very rich geometric decoration which resembles that of the Mosaic of the Gladiators in the Roman villa of Nennig near the border with Luxembourg. 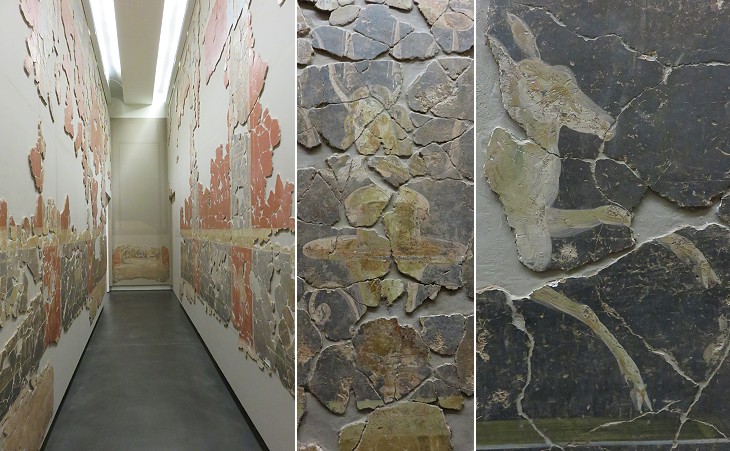 NMHA: Frescoes from a corridor of the villa at Vichten (see another fresco in the introductory page)

Archaeological campaigns at Vichten found minute fragments of paintings. In the past these would have been lost, but today technological developments make possible their assemblage on new supports and the reconstruction of the images they depicted. The Centre d'Étude des Peintures Murales Romaines, a branch of the French National Center for Scientific Research, was very successful in this task and we can now see that the villa was embellished with frescoes having a typical Roman black or red background. 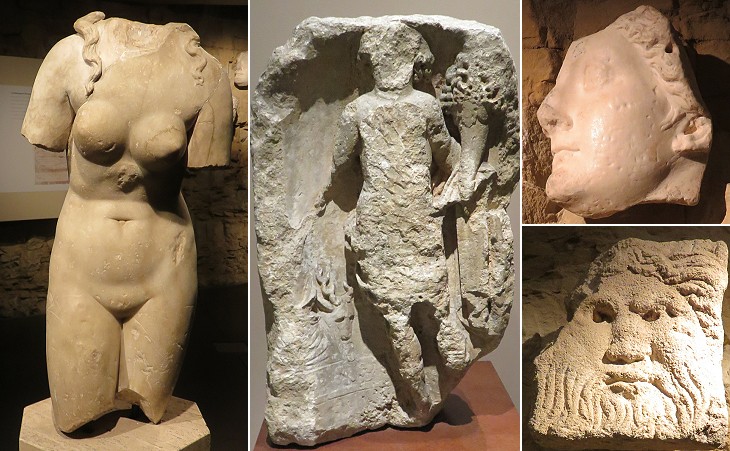 NMHA: Marble and local sandstone sculptures: (left) Venus, Roman copy of a Greek original of the IIIrd century BC; (centre) Cernunnos, a god of Gaul; (right-above) head of Livia, Emperor Augustus' third wife (early Ist century AD); (right-below) head of a river god or a funerary mask similar to the "larvae" found at Lyon; the image used as background for this page shows a relief portraying Hercules

The collections of the museum include some imported statues and others which were made locally. That of Cernunnos is an interesting example of the "Romanization" of the traditional local beliefs. Cernunnos was the Celtic/Gaulish god of horned animals and he was usually portrayed with horns. In this stela instead he is depicted as a god of abundance or fertility holding a cornucopia. The stag is a reference to the original cult. Other local deities were associated to Mercury. 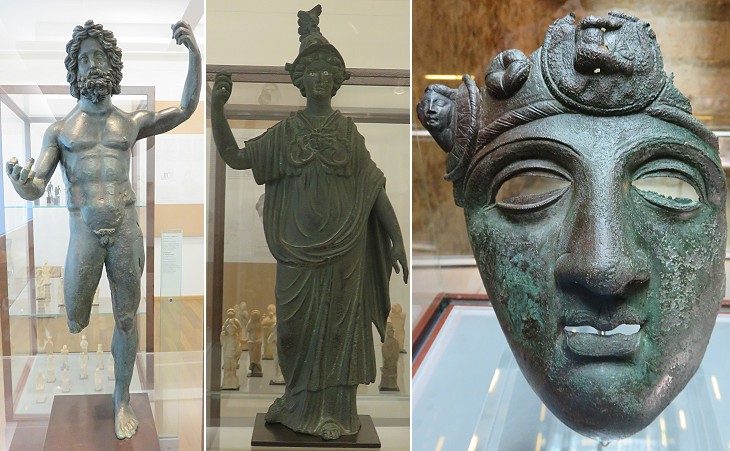 Small bronze statues were a typical embellishment of houses throughout the whole Roman Empire, whereas the helmet highlights a particular aspect of Luxembourg and of the other regions near the Rhine border, i.e. the presence of the military. A large number of gravestones of legionaries (see one in the introductory page) provided archaeologists and historians with data about the location and composition of the Roman armies in Germany. In addition to gravestones also many highly decorated helmets were found (see one from Xanten and also one found in Lancashire in Roman Britain). That found in 1853 in a necropolis near the village of Hellange in Luxembourg has the aspect of a funerary mask, but most likely it was used by a Roman commander during parades. 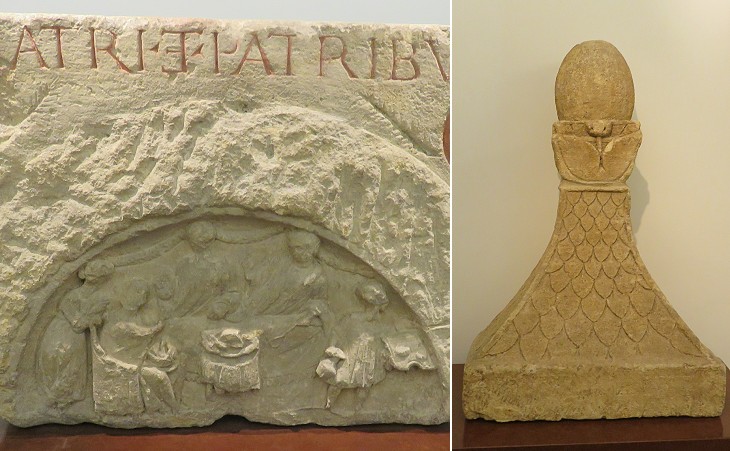 The concept of a distinct identity for the region of Luxembourg emerged only during the Middle Ages. During the Roman rule it was part of Gallia Belgica and it was crossed by the road linking Trier (Augusta Treverorum) to Reims (Durocortorum) in Northern France. Some of the exhibits at the museum indicate that the inhabitants of the region availed themselves of workshops of Trier for their funerary monuments. The relief depicting a funerary banquet is very similar to one at Trier and the tile-looking decoration of the tip of another monument resembles those found near Trier.

NMHA: Relief from a funerary monument depicting Vitis, a personification of viticulture

The relief was found at Remerschen, on the left bank of the River Mosel which marks the border between Luxembourg and Germany. Winemaking was introduced in the region in the late IInd century AD and it soon became a key element of the local economy, a tradition which continues to our days. Reliefs depicting scenes of grape harvesting and other winemaking activities can be seen in most, if not all parts of the Roman Empire, e.g. at Narbonne, but their personification in Vitis is rather uncommon, because usually this role was assigned to Bacchus/Dionysus. 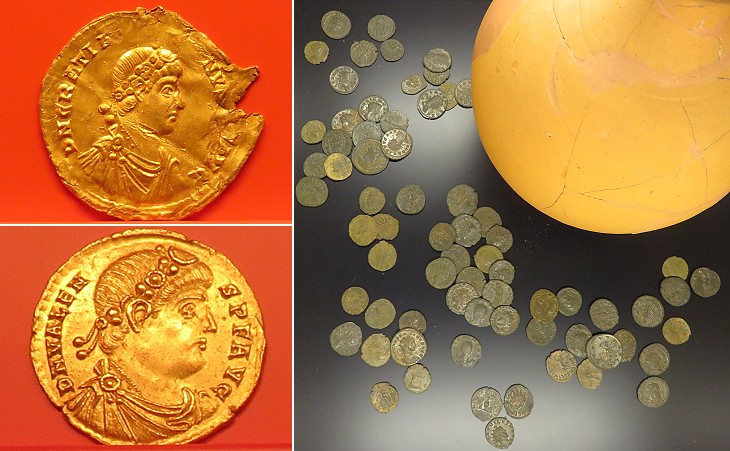 Emperor Diocletian greatly reformed the administration of the Roman state by entrusting it to tetrarchs (four emperors/vice-emperors), one of whom, Constantius Chlorus established his residence at Trier. Diocletian tried to reform also the Roman monetary system in order to curb inflation. This objective was accomplished by Emperor Constantine; it was based on the solidus, an almost pure gold coin which was issued in very large quantities by the mint of Trier. It has often been found together with silver coins in hoards across Germany (see the introductory page) and Britain, e.g. at St. Albans. 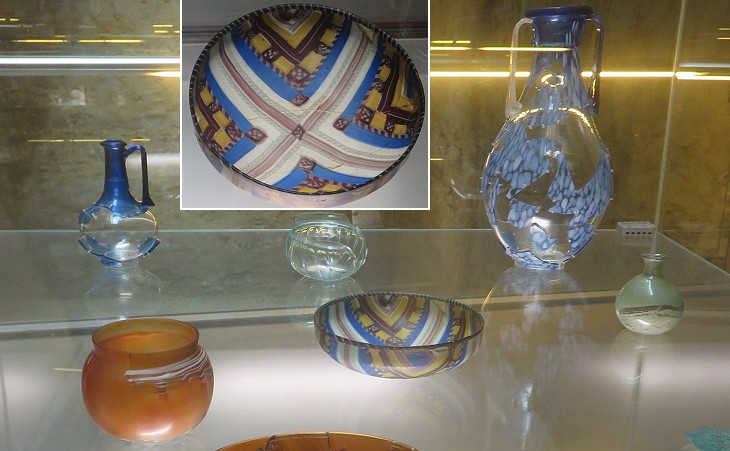 Glassmaking was a main industrial activity in Roman Germany; initially it was limited to ordinary liquid containers, but eventually it developed very advanced processes which led to the manufacturing of luxury items. The workshops of Cologne managed to achieve extraordinary results, but also the glassware collection at the NMHA has some very fine items.