at Abbazia di Casamari
(logo of FAI Spring Weekend and the apse of S. Maria Salome in Veroli)

This page is part of a section which includes Veroli and Boville Ernica. All locations were very near the border with the Kingdom of Naples until 1860. 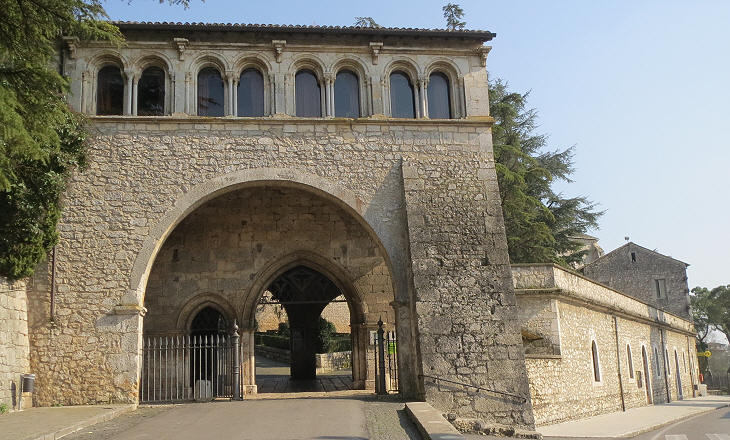 I had often heard of this Monastery, the finest of its kind in the whole of Latium, with the exception of Fossanova. It was said to be a marvel of Gothic architecture, and here it stood before me, lonely, dominating, and very remarkable, on its platform of rock. (..) The monastic buildings are enclosed within a court, into which a great Romanesque portal leads by an arcade, the "arcus deambulatorii" of the rich monks of the Middle Ages.
Ferdinand Gregorovius - Von den Ufern des Liris - From the Banks of the Liri - 1859 - English translation by Dorothea Roberts. 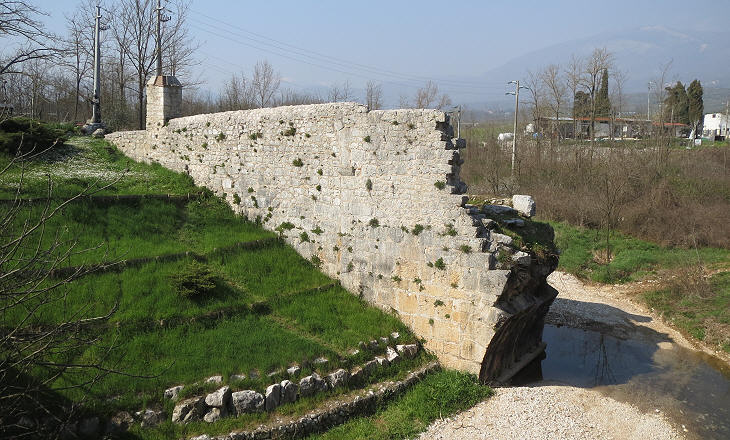 Ruin of a Roman bridge over the Amaseno, a small stream

Beside it a little river, fringed by sad-looking poplars, runs past; all around it is an arid and silent wilderness. Gregorovius
The name Casamari apparently originates from casa amara (bitter house), but it instead refers to Roman consul Gaius Marius who was born at Cereatae Marianae in the vicinity of Casamari. An ancient Roman bridge over a small stream was utilised to support a medieval aqueduct for the abbey. It was almost entirely destroyed by German troops in 1944. 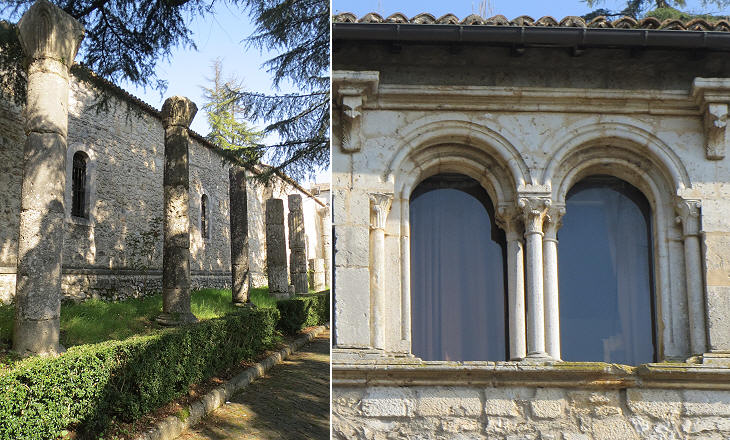 (left) Remaining wall of the early Benedictine monastery and columns from ancient Cereatae Marianae; (right) detail of the residence of the abbots above the entrance gate

A Benedictine monastery was founded in 1035, but in 1152 Pope Eugenius III called in Cistercian monks who designed an entirely new abbey. The Abbatial Church was consecrated by Pope Honorius III in 1217, shortly after that of Fossanova, another Cistercian abbey in southern Latium.
In 1430 Pope Martin V assigned the abbey to Cardinal Prospero Colonna, his nephew. Towards the end of the XVth century Cardinal Giuliano della Rovere (future Pope Julius II) commissioned a monk the compilation of Chartarium Casamariense, a history of the abbey. 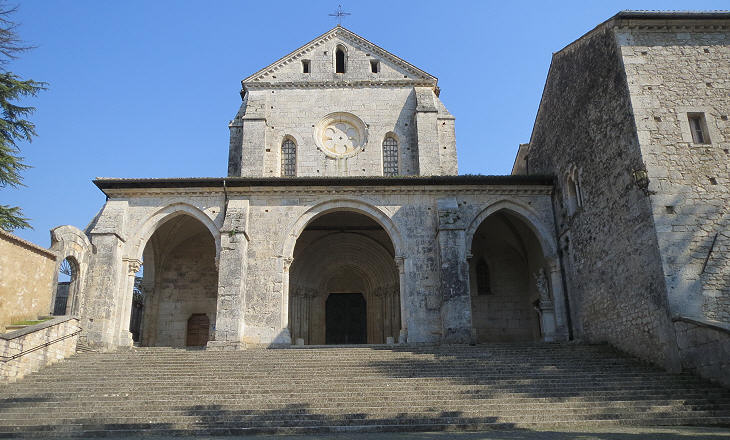 When I entered the courtyard and saw its façade I feared I should be disillusioned, for it promised but little, with its circular openings and broad flight of steps leading to the vestibuli. Here was a statue of Pius VI, and a tablet recording how that Pius IX had restored the Abbey to the patrimony of the Church. Gregorovius
At the time of Gregorovius' visit the façade was decorated with baroque stuccoes. They were removed in 1951 and the façade was brought back to its assumed original design. 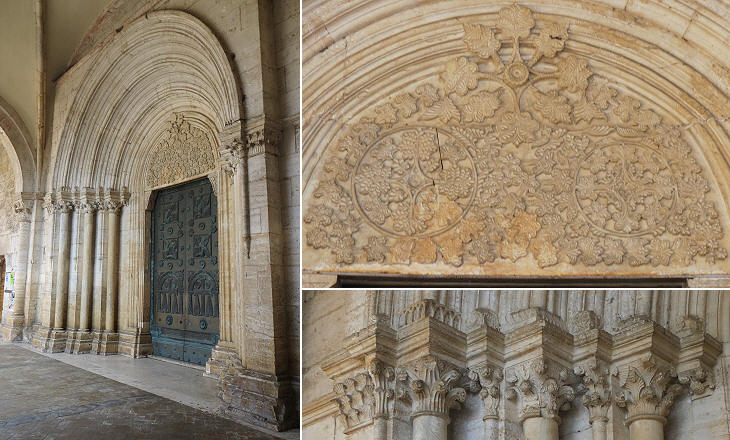 Abbatial Church: main portal and details of its decoration

The central entrance is framed by an elaborate portal in Romanesque style. The overall design of the church shows the transition from Romanesque to Gothic architecture. Consistent with the Cistercian ban on representing human beings or animals, the decoration of the portal was based on plant motifs. 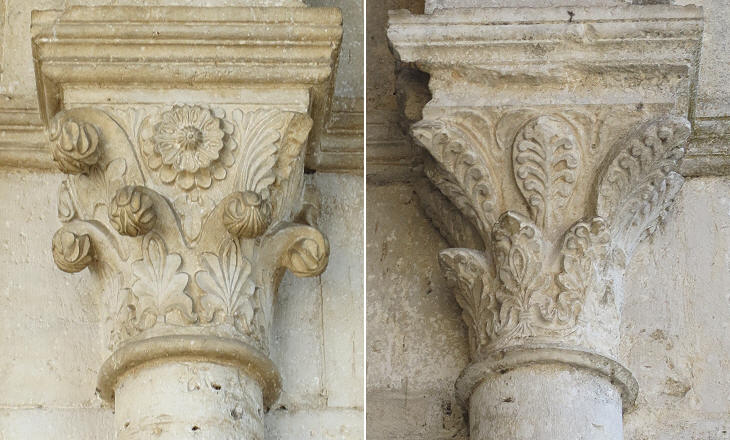 Abbatial Church: capitals with flowers and leaves (another example can be seen in the image used as background for this page)

The capitals of the portico were decorated with plant motifs as well. The sculptors who worked at these capitals however did not depict actual flowers and leaves; they were interested in developing some geometric patterns out of them. This stylized approach to the depiction of flowers and leaves is typical of Islamic art (you may wish to see some examples at Divrigi in Turkey). 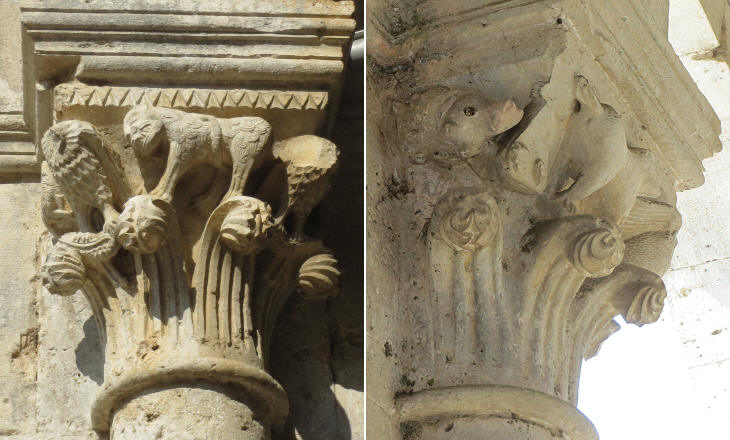 The left section of the porch was perhaps completed at a later stage because some animals were represented, perhaps symbols of the Four Evangelists. The lower part of the capitals is consistent with the decoration of the rest of the porch. 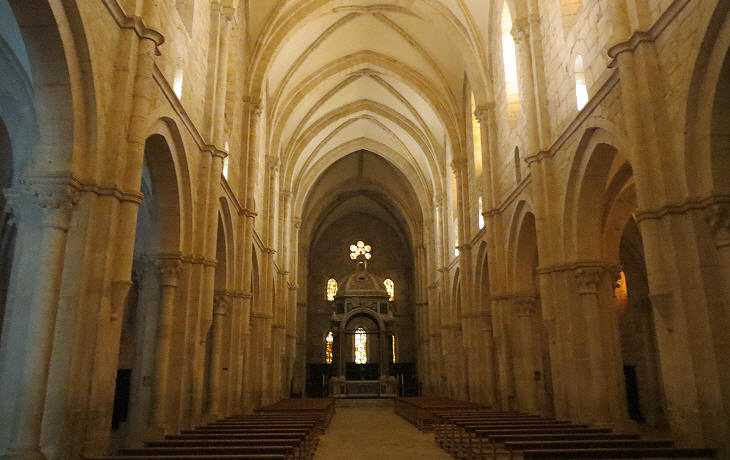 Then I entered the church, and was most pleasantly surprised. It is a large building, perfect in its proportions, with three aisles all harmonious in character, and only divided from the beautifully vaulted choir by an open metal screen. The simplicity of its architecture  my own native Gothic  the harmony of all its parts, the soft colour of the travertine of which it is built  all this moved me profoundly. If for many years you have been accustomed to the Roman basilica with its flat roof or its cupola overladen with ornament, this Gothic strikes you as being so new, so full of life, so bold, striving after so high an ideal, so imposing in its combined richness and simplicity, boldness and grace, strength and lightness. Its massiveness is tempered by the combination of all its parts to support and carry out its own fundamental idea. Accustomed as I was to churches overladen with sculpture, with baroque and ponderous ornamentation, with pictures and inscriptions, filled with monuments and altars, and finding none of these things here, this seemed to be a fair and beautiful temple consecrated to a pure and free worship. Gregorovius 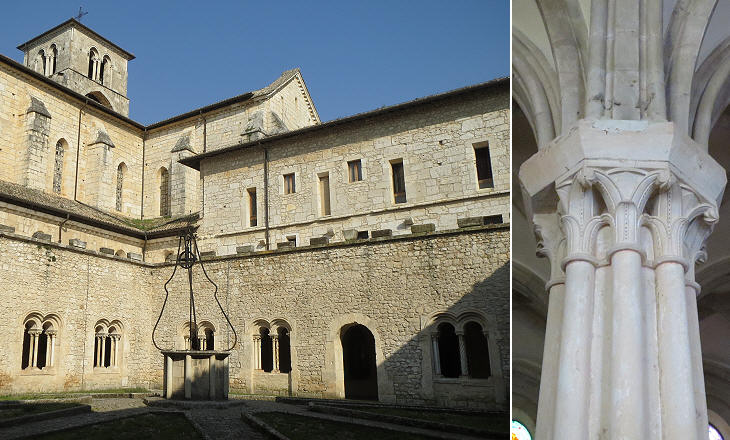 The Monastery is Romanesque in style. The cloister is spacious, the four sides filled with semi-Gothic arches supported by double pillars, yet the quadrangle is not especially fine. The Chapter House impressed me (..) the roof is upheld by four groups of clustered columns, each group consisting of eight bound together, and from these eight-angled pillars spring arches, terminating half-way down the walls in strange ornamental bosses. Gregorovius
The Abbey still belongs to the Cistercian Order.