- Patmos
(fresco at the monastery) 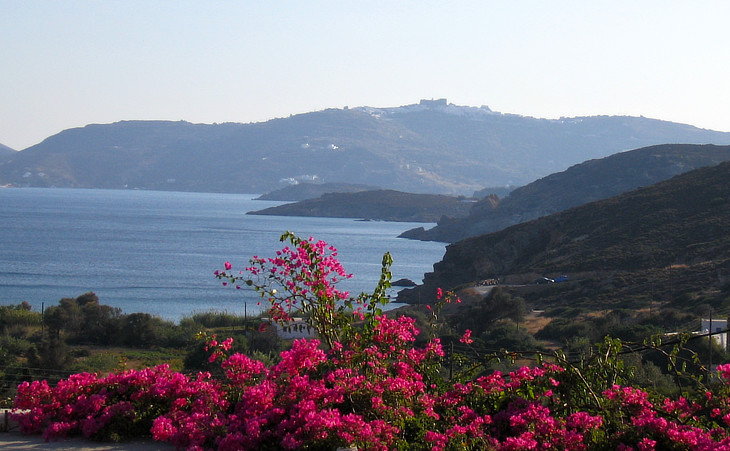 Patmos is computed, by the modern Greeks, to be forty miles round, tho' the antients speak of it only as thirty; and it does not seem to be so much. On the east side there is a deep bay, and on the west two small ones, which make the north and south part of the island peninsulas: The neck of land which joins them is not above a quarter of a mile broad: The town was formerly on the east side of the isthmus, but the people removed to the hill on the south for fear of the Corsairs, and built a town about the convent, which is on the summit of the high hill.
Richard Pococke - A Description of the East and Some Other Countries - 1745
The island of Patmos is very small (only 13 square miles), but it is well known for its mention in the Book of Revelation (Apocalypse of John): the tradition identifies this John with St. John the Evangelist who was exiled to Patmos.

The northernmost point of the island and some islets near it

At the present day it is one of the least accessible of the Aegean islands, for owing to its remote position and the unproductiveness of its soil no steamers ever touch there. (..) The soil of which the island is composed is everywhere volcanic and very barren, and its coasts are flanked by red and grey rocks, which ever and anon break into quaint pinnacles.
Henry Fanshawe Tozer - The islands of the Aegean Sea. Published 1890, but Tozer began his travels in 1874 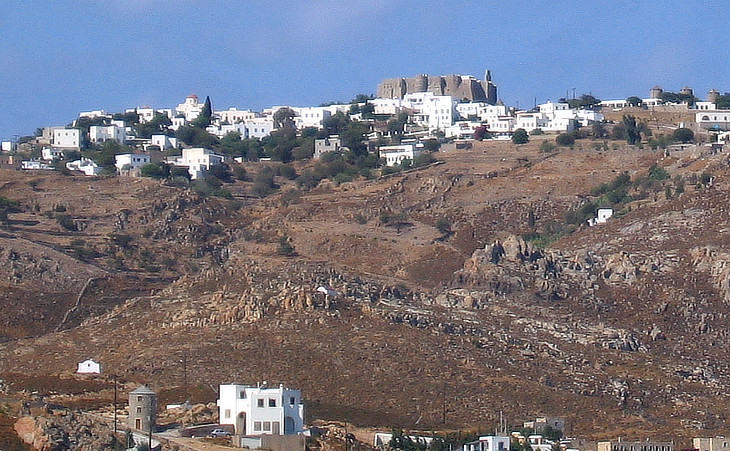 The town and the monastery of Patmos

The situation of the town and great convent, which are on the top of the hill, is something like that of St. Marino. Pococke
Long before we arrived, the monastery of St. John, which is the most conspicuous building in the island, had been in sight, crowning the summit of a high hill, like a vast sombre castle, with the white houses of the town clustered round it. Tozer
The town is dominated by the castle-like monastery, especially because it is surrounded by white buildings.

The monastery: details of its fortifications

The convent resembles a castle irregularly built, but the small church is very neat; it was founded, as I am informed, by the emperor Alexius Commenius; they have two large bells in it. The abbot is chosen once in two years; there are in all two hundred members belonging to the convent, but there are only twenty priests, and about forty caloyers in the monastery. They have a small library, furnished with some of the best printed books, mostly the Greek fathers. Pococke
With the exception of one or two Greek monasteries which are built in the interior of caverns, such as those of Megaspelaeon in the Morea and Sumelas at the back of Trebizond, none that I can remember is so closely and strangely packed together as that of St. John; its staircases are quite a puzzle, and passages occur in the most unexpected places, and diverge in a variety of directions. (..) The library is a spacious and airy room, and the books are arranged in cases along its walls, so that it presents a very different appearance from what Dr. E. D. Clarke described, when he saw it at the beginning of this century, and carried off some of the most valuable of the works that it contained. Tozer
The external appearance of the monastery is very much that of a fortress: it was initially built in the XIth century but its fortifications were strengthened in the XVth and in the XVIIth centuries.

The monastery: main courtyard, the image used as background for this page shows arches which strengthen the building

Within it are numerous cisterns for storing water and troughs for washing. The court round which it is built is very irregular in shape, and several pointed arches are thrown across it to strengthen the buildings on either side. The upper part is a wilderness of chimneys, bells, domes, and battlements. (..) The great church of the monastery is entered through an outer porch, which runs the whole length of the west end of the building, and is open to the court, being supported on the outer side by marble columns. Tozer
The monastery is structured around a central courtyard which was modified several times and was thoroughly redesigned in 1698.

The main church of the monastery: details of its frescoes (see also the image in the icon of this page)

Its walls are frescoed with sacred subjects, among which may be seen the warrior saints, St. George and St. Demetrius, and St. Artemius with Constantine and Helen. In one part stands Alexius Comnenus in robe and crown, bearing a cross in his hand; in another the magician Kynops is throwing himself into the water, while on the opposite side of the picture is the aged St. John with his followers. Tozer
The narthex (porch) of the main church is entirely decorated with frescoes many of which depict episodes of the life of St. John the Evangelist including the saint defeating the devils who tempted him. According to tradition a large church was built at Ephesus on the tomb of the saint.

Mosaics at the monastery (left) and at the cave where St. John wrote the Apocalypse (right)

There is a smaller convent about half way up the hill, it is called Grot of the Apocalypse, in which there is a grot, now converted into a church, where they say St. John lived when he was banished to this island, and where they affirm he writ the Revelations; it is nine paces long and four wide, cut entirely out of the rock, except on the north side, where it opens to the chapel of St. Anne, and in the middle there is a square pillar, which seems designed to support the rock: To the east of this pillar there is a crack which goes all across the grotto, by which they say the Holy Ghost spake to St. John when he writ the Revelations and the Gospel; for the monks say, that, according to the testimony of some of the fathers, he wrote the Gospel here as well as the Revelations: They say he was seventeen years in this island, which seems to be a mistake for as many months, because it is agreed by the learned that he was here but eighteen months. (..) This convent is a sort of novitiate, or seminary, subject to the great convent, and is governed by a professor. (..) This school, and the present professor who governs it, are esteemed the best in all the east; they have about fifty scholars who come from different countries, and the greater part lodge in the two convents, though some of them are in the town. Pococke
Just outside the entrance gate of the convent of the Apocalypse stand the ruined buildings of a school which formerly was resorted to by numerous students from the neighbouring islands. Tozer
In addition to the main monastery at the top of the hill there is a smaller monastery at the cave where St. John the Evangelist wrote the Apocalypse.

The panorama from the roof of the monastery, to which I ascended on the morning after my arrival, is truly wonderful. The greater part of the strange island, with its varied heights and irregular outline, is visible, and, along with it, the wide bay, which is embraced by its rocky arms. Toward the north appeared the level line of Icaria, the peaks of Samos, and the promontory of Mycale; and, in the opposite direction, the island of Leros, beyond which rose the fine summits of Calymnos. (..) . Such was the view which, with frequent changes from day to night, and from sunshine to storm, must have been present to St. John at the period of his banishment; and it is an interesting question whether the impression which it made upon him is traceable in the imagery of the Revelation. Tozer

The whole island belongs to the convent, as well as all the small isles to the east of it. (..) The convent pays two purses yearly to the captain bashaw (Ottoman Admiral) for the island. (..) There are three hundred churches in the island. Pococke
The southern half of the island belongs to the monks, whose number is thirty, and they are all natives of Patmos. At at the present time they complain of poverty. Tozer
The religious atmosphere of Patmos is emphasized by the many churches which surround the monastery.

The inhabitants, who are all Christians, are mariners, or shipwrights; for the island is a barren rock, and every thing is brought from without. The only export is cotton stockings to Venice, to which city their ships frequently go. Pococke
The male population are chiefly employed in the sponge fishery. (..) The Scala or village at the landing-place, has a very peculiar appearance, for each of the small two-storeyed houses of which it is composed resembles a square, flat-topped box, as white as whitewash can make it. This mode of building prevails throughout this island, and, as we afterwards found, in those that lie to the southward of it. Tozer
The old settlement of Chóra, is one of the best preserved and oldest of the Aegean Sea. Beginning in the 13th century, the town was expanded by new quarters in the 15th century for refugees from Constantinople (the Alloteina) and in the 17th century from Crete (the Kretika). Paradoxically, perhaps, Patmos thrived as a trading centre under Ottoman occupation, reflected by fine merchants' houses of the late 16th and 17th centuries in Chorá. The town contains a number of fine small churches.
UNESCO: from the criteria supporting the inscription of Patmos in the World Heritage List in 1999.
The buildings of Kretika and Alloteina which surround the castle still fit the description by Tozer.