- Trevi and Filettino
(detail of a fresco at S. Onofrio) 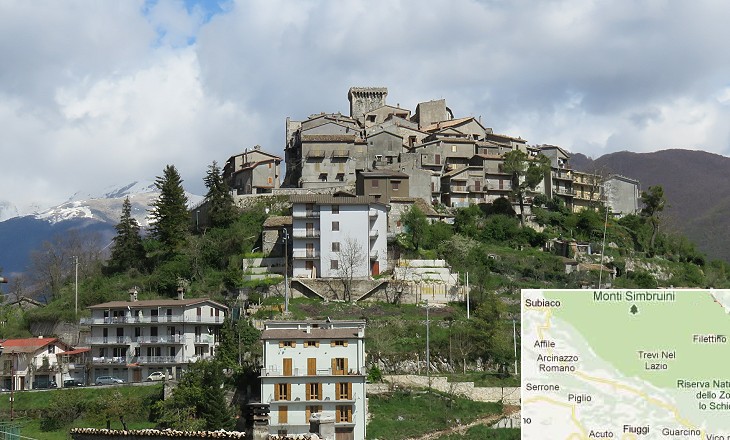 View of Trevi nel Lazio, not to be confused with Trevi nell'Umbria; (inset) small map showing Subiaco, Trevi and Filettino and some small towns covered in other walks (i.e. Fiuggi, Piglio and Acuto)

Subiaco is situated in the upper valley of the River Aniene and its Abbots made many attempts to gain control over Trevi, at the end of the valley. The name of the town means three roads (similar to S. Maria a Trevi in Rome), because in addition to the road towards Subiaco, other roads led from Trevi to Alatri (via Guarcino) and to Anagni (via Piglio/Acuto). 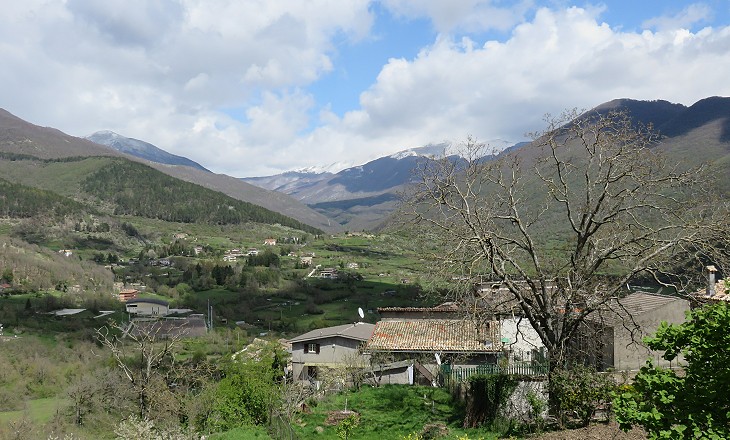 Trevi is a very ancient town and during the Roman Empire it was very prosperous because its position favoured trading activities. What had been an advantage turned into its contrary in the following centuries because it exposed Trevi to raids by the Saracens who established a permanent base south of Terracina. Some of its inhabitants sought refuge at the very end of the valley and founded Filettino, a small settlement hidden into the mountains. Trevi was a bishopric see but in 1066 its diocese was united to that of Anagni. The Abbots of Subiaco were not able to list Trevi among their possessions during the Middle Ages because the town became a fiefdom of the Conti of Segni, the family of Pope Innocent III and after them of the Caetani of Anagni, the family of Pope Boniface VIII. These families were based in towns in the plain beyond Monte Scalambra, a mountain to the south of Trevi. Their power declined in favour of the Colonna of Paliano, a town near Anagni, after a member of this family became Pope Martin V in 1421. 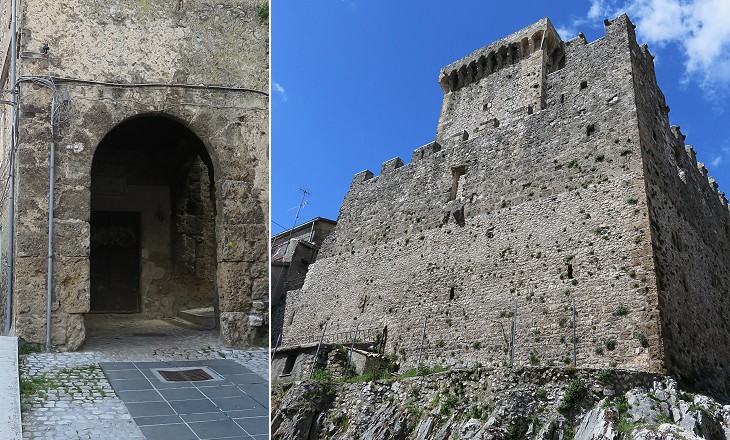 (left) Gate leading to the upper part of the town; (right) Castello Caetani

In 1482 a conflict (one of many) erupted between the Colonna and the Orsini, a rival family. The former were supported by the King of Naples and the latter by Pope Sixtus IV. Alfonso II of Aragon, Duke of Calabria and son of the King of Naples invaded the Papal State and seized Trevi. His troops brought about such devastation that a chapel was built to celebrate the day they left the town, similar to what was usually done for the end of a pestilence. 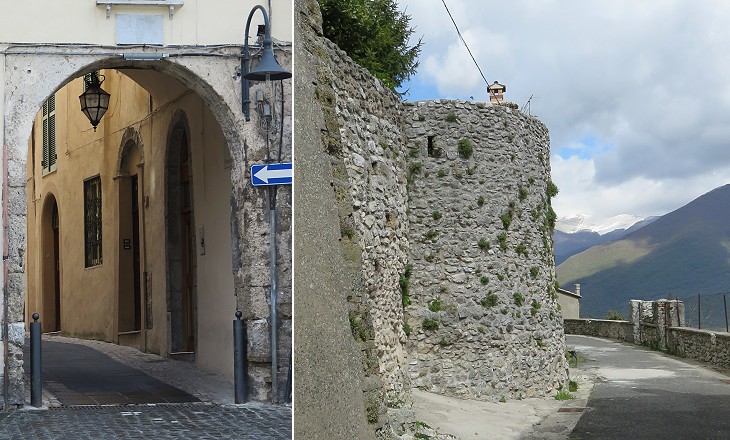 (left) Porta Romana; (right) a tower of the walls

Eventually Trevi was assigned by the Popes to the Commendatory Abbots of Subiaco. In 1753 it became a direct possession of the Papal State, but it did not lose its fortifications because of the many brigands who lived in the region. 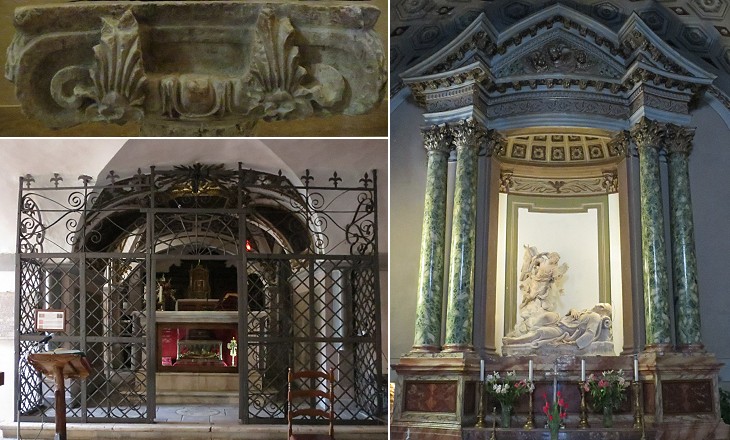 The Patron Saint of Trevi is St. Peter the Hermit, a local XIIth century man, not that by the same name who promoted the First Crusade. The miracle for which he is best known is related to his freeing Trevi from a siege of wolves, similar to what St. Francis did at Gubbio. This animal was very common in the Apennines up until the mid-1800s. 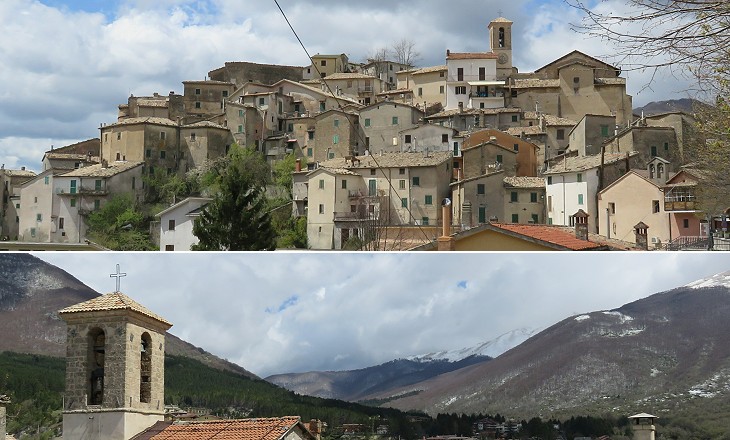 It. fila means line/queue and perhaps Filettino owed its name to the way its houses lined up at the top of a commanding rock near one of the sources of the River Aniene. In the 1960s a road was opened to allow access to ski facilities on a mountain behind Filettino. Until then the small town was l'ultima stanza de' mortali. "Here I saw huts and wandering flocks/The last human dwellings were there." Alessandro Manzoni - Adelchi - Act II - Translation by Michael Curtis. 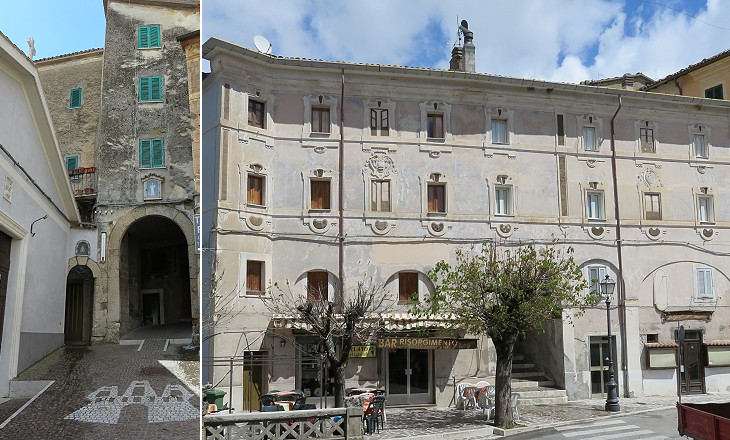 The history of Filettino is strictly associated with that of Trevi, however because of its remote location its inhabitants were allowed to rule themselves through a council of sixty members. A representative of the Papal State monitored the councillors so that they did not exceed the limits set on their activity.
During the XVIIth and XVIIIth centuries Filettino was a rather prosperous community thanks to the breeding of sheep, cattle and horses. Palazzo Arquati is located outside the walls of the small town and it has a gentle XVIIIth century appearance. A member of the Arquati family is known for having been a supporter of the Italian Unity. He was killed in 1867 together with his wife Giuditta Tavani, whose memory is celebrated by a small monument in Trastevere. 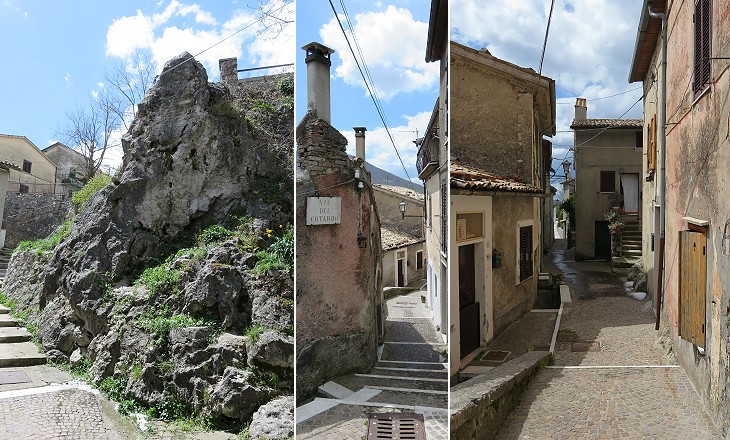 (left) Rock at the highest point of the old town; (centre/right) Via del Cotardo, the main street, from Lat. "costis ardua" (steep side)

The houses inside the small town are aligned along a narrow street where I found patches of frozen snow on April 16, 2014. Very few people live there. In 2011 Filettino had a population of 551, less than one fifth of that recorded in 1921. (left) The ravine to the south of Filettino; (right) view towards Trevi (not visible)

The image used as background for this page shows a clock on a bell tower at Filettino which indicated the Italian Hour.

Other pages on this walk: Subiaco, S. Scolastica, Sacro Speco and Cervara and Rocca Canterano.