- Ciciliano
(detail of a ceiling at Palazzo Conti at Poli) 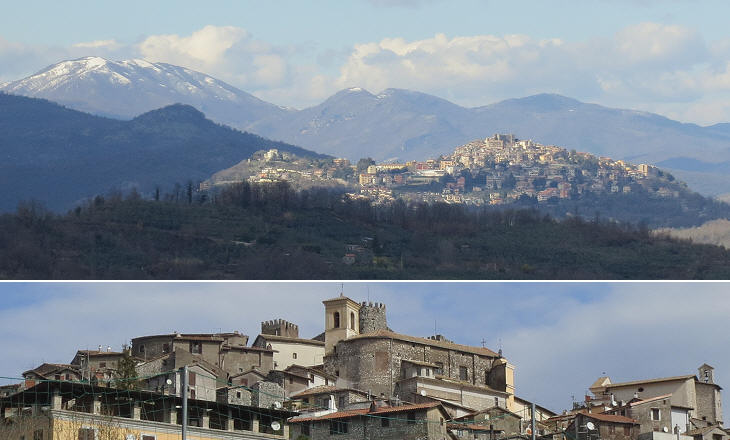 Ciciliano seen from Pisoniano (above) and from the modern town (below)

Ciciliano is situated at the northern end of a valley which runs to the east of the Monti Prenestini. It controls a pass which still bears the name of Passo della Fortuna, because the ancient inhabitants of the River Aniene valley crossed it on their way to Santuario della Fortuna Primigenia at Palestrina.
It was founded in the XIth or XIIth century and for some time it was a possession of the Benedictine abbots of Subiaco. 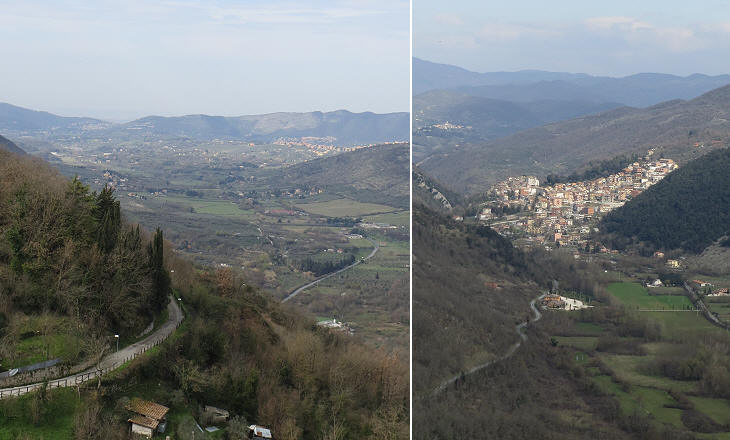 In the late XIVth century Ciciliano (together with S. Vito) was acquired by the Colonna, a very powerful family with many fiefdoms south of Rome. Ciciliano was their northernmost possession and put the Colonna almost in contact with the Orsini, another powerful family having fiefdoms in the Aniene valley and in other areas north of Rome, such as Bracciano. The two families competed for controlling Tivoli, but that town was never a fiefdom either of the Colonna or of the Orsini. 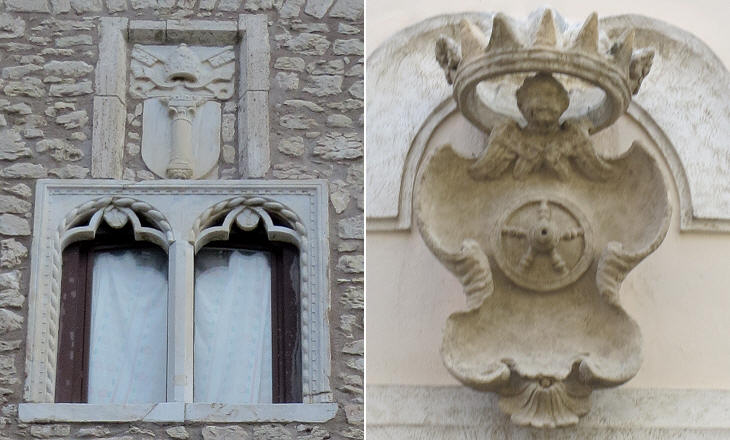 In 1565 the Colonna sold Ciciliano to the Massimo who in turn sold it to Mons. Girolamo Theodoli, Bishop of Cadiz in 1572. The Theodoli came from Forlì, a town near Cesena, and they retained Ciciliano until 1816 when they gave up their feudal rights. 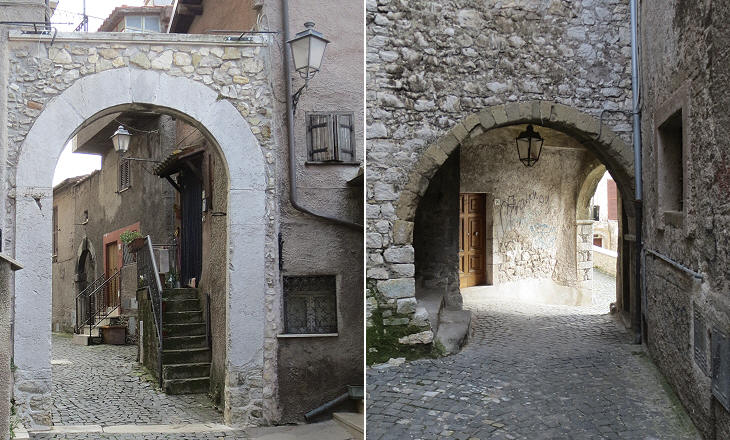 The walls of Ciciliano were pulled down in 1541 by Pope Paul III in order to punish its inhabitants for having failed to pay their hearth tax, but the houses of the town form a barrier which leaves only a few passages. Porta S. Anna or Porta di Sotto was built in the XVIIth century between the oldest section of the town and a new borough on its southern side. 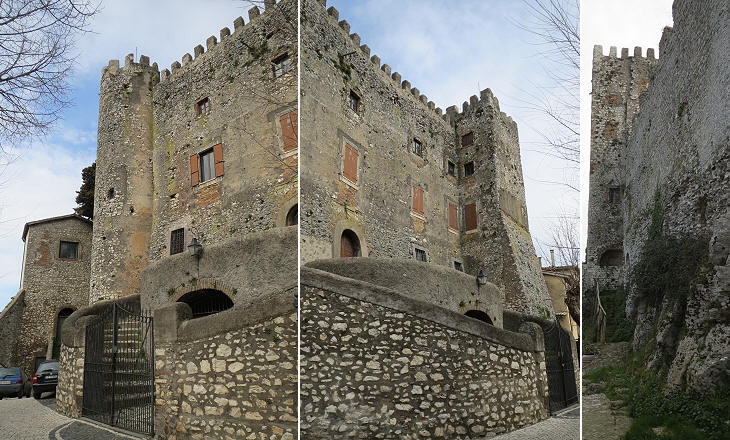 A small fortress or perhaps just a tower was probably built when Ciciliano was founded. The Colonna enlarged it by adding four square bastions, one of which was turned into a circular one in the XVIth century. The Theodoli used the fortress as one of their residences. In the early XXth century battlements were added to enhance the medieval aspect of the building, similar to what occurred at Castello Brancaccio at S. Gregorio da Sassola. Castello Theodoli is still a private property and occasionally it is rented for wedding parties. 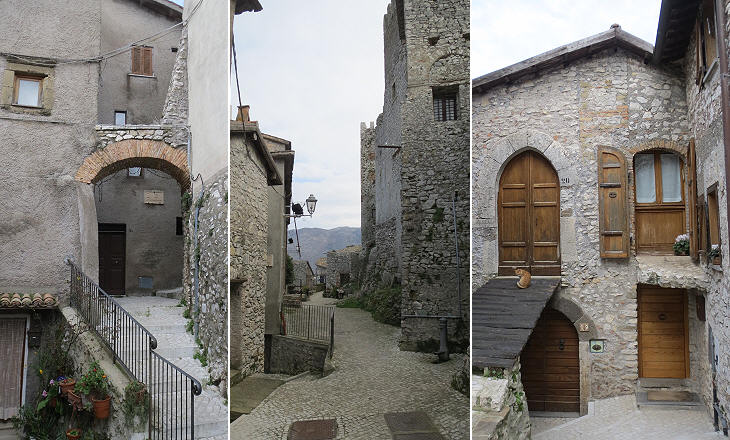 The northern side of the hill where Ciciliano is situated is precipitous and Castelluccio is the name given to a series of narrow streets between Castello Theodoli and the northern edge of the hill. Only two narrow passages at the sides of the castle allowed access to this very old part of the town, which is in the process of being restored. 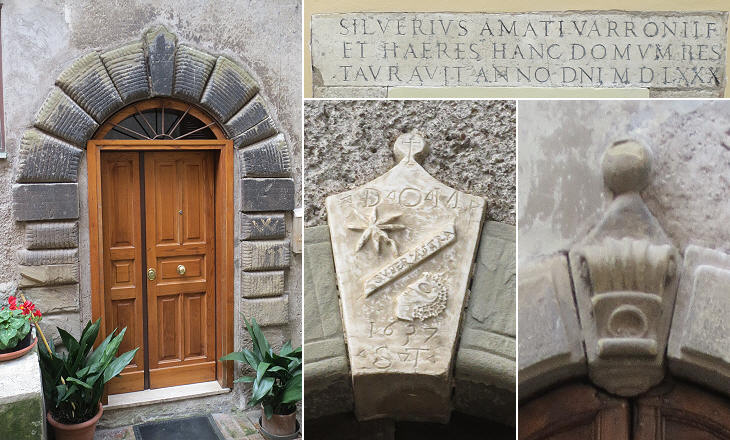 The Theodoli are credited with being personally involved in ruling their fiefdoms and in improving the living conditions of their subjects. The presence of some decorated houses indicates that local families were able to achieve some degree of wealth. 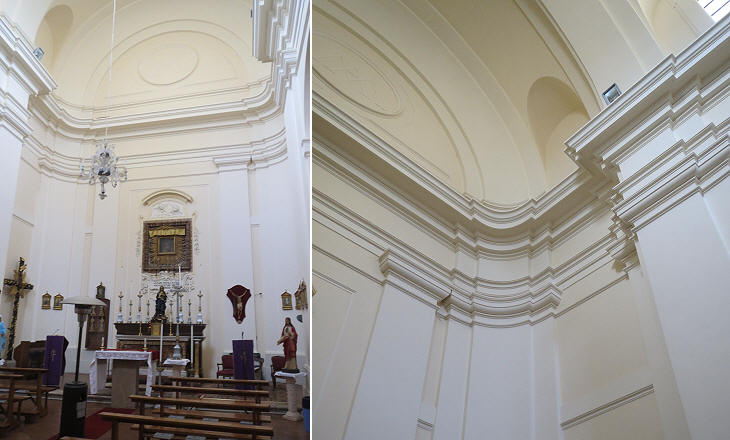 Interior of S. Maria della Palla (the image used as background for this page shows a stucco decoration above the main altar)

Girolamo Theodoli, Earl of Ciciliano, had an interest in architecture which was not just an amateurish one as he was commissioned the design of SS. Pietro e Marcellino and of the bell tower of S. Maria dei Miracoli in Rome. At Vicovaro he designed S. Pietro, a new large parish church. At Ciciliano children playing with a ball (It. palla) hit a wall so strongly that its facing fell revealing a fresco portraying Virgin Mary. Girolamo Theodoli built a large chapel to house the image. It was decorated with elaborate stucco mouldings, typical of Roman Barocchetto.

On the Road to Tivoli 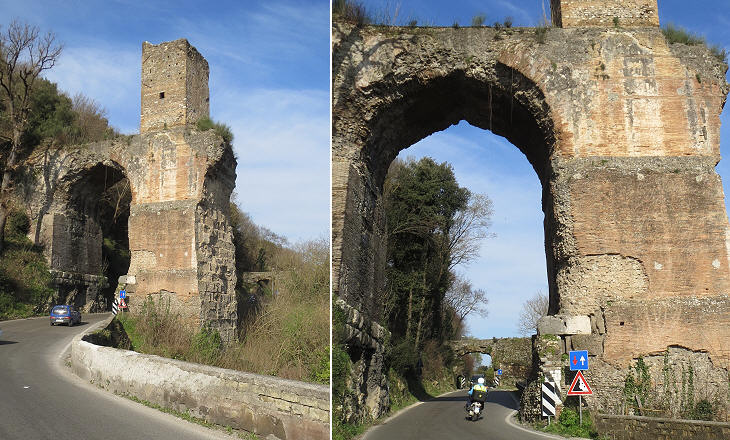 Ruins of two aqueducts near Tivoli: in the foreground "Anio Novus" and behind it "Aqua Marcia"

Four aqueducts passed through the valley between Ciciliano and Tivoli. An imposing arch of Anio Novus was fortified in the VIIIth century to protect the access to Tivoli. Immediately after the arch the aqueduct entered a very long tunnel through the adjoining hill. It eventually joined Aqua Claudia, another aqueduct, seven miles east of Rome.