- S. Vito Romano and Pisoniano
(detail of a ceiling at Palazzo Conti at Poli) 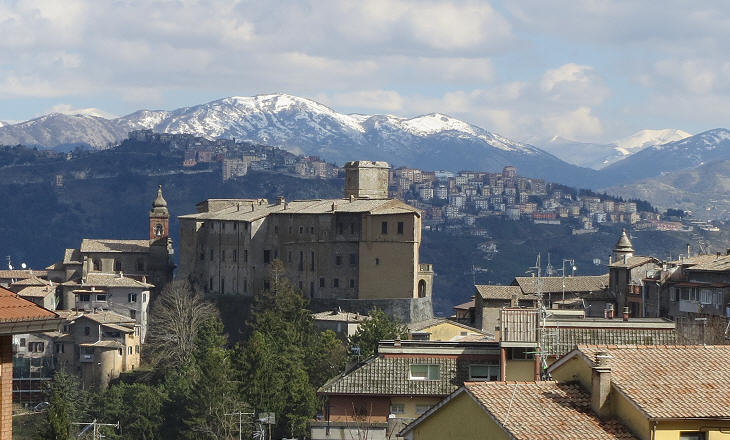 View of S. Vito Romano with Bellegra in the background

S. Vito was most likely founded in the IXth century by settlers who abandoned villages raided by the Saracens. It belonged to the Abbey of Subiaco until 1373 when it was acquired by the Colonna who built an imposing fortress at the top of the town. Its high walls form a wedge on the side facing one of the higher points of the mountain. 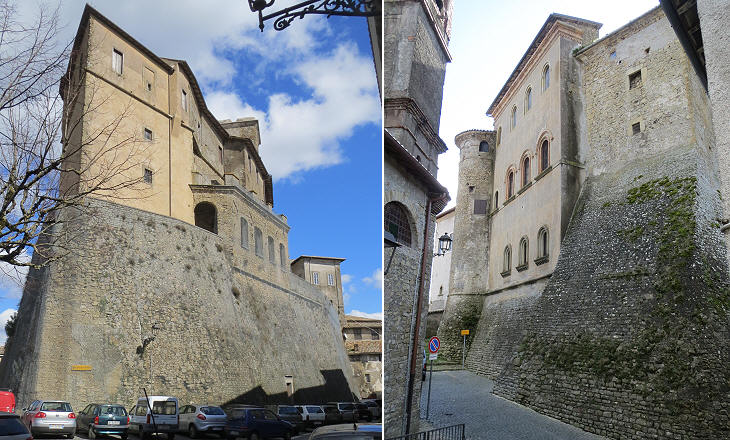 In 1565 the Colonna sold S. Vito (and Ciciliano) to the Massimo who in turn sold it to the Theodoli in 1575. This family came from Forlì, a town near Cesena. By acquiring S. Vito they became a Roman noble family and they modified the fortress to turn it into a palace suitable for their new status. Other modifications were made in the early XXth century, including a fake Renaissance façade between two medieval towers. In the old part of S. Vito

A modern mural painting (which you can see in the image used as background for this page) shows how the houses in the old part of S. Vito cling onto the steep sides of the mountain having on top Palazzo Theodoli. Because of lack of space some streets have been covered to enlarge the adjoining houses. In 1643 Mario Theodoli, son of the Marquis of S. Vito, became cardinal and he promoted the enlargement of the town along the ridge which linked it to the top of the mountain. The rocks were levelled out (montium asperitatem aequavit in the celebratory inscription) and a straight street was opened, which is still named after him. 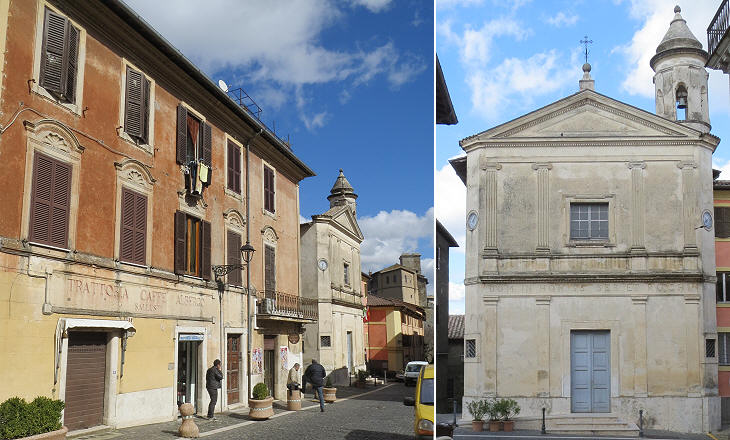 The new section of the town was placed under the protection of St. Roch, a saint who was specially invoked against the plague. Apparently the pestilence which in 1656 killed almost all the inhabitants of Arsoli and S. Gregorio da Sassola, did not have the same dramatic impact at S. Vito. 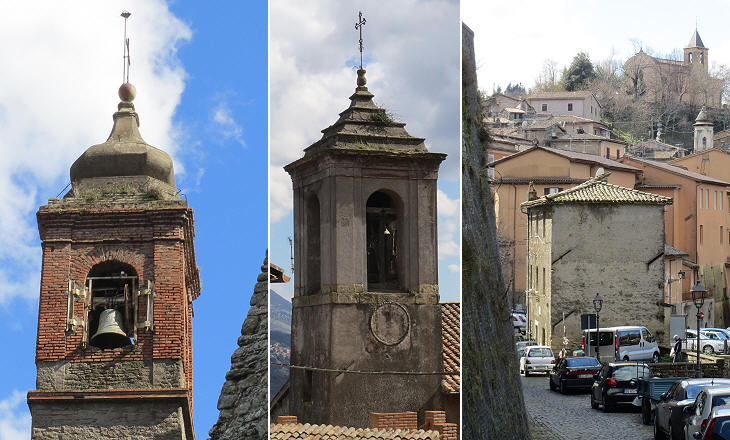 The Theodoli did not limit themselves to building S. Rocco, but they promoted the construction/restoration of several other churches including one dedicated to St. Vitus, the patron saint of the town.
The appellation Romano was added in 1872 to distinguish S. Vito from ten other Italian towns by the same name. 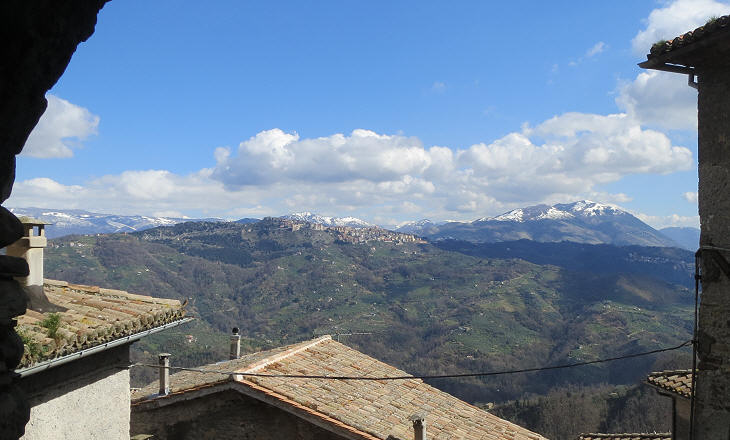 View over Bellegra and the Apennine mountains

Living in a house in old S. Vito may not be very comfortable, but almost all of them enjoy great views over the Apennine mountains. 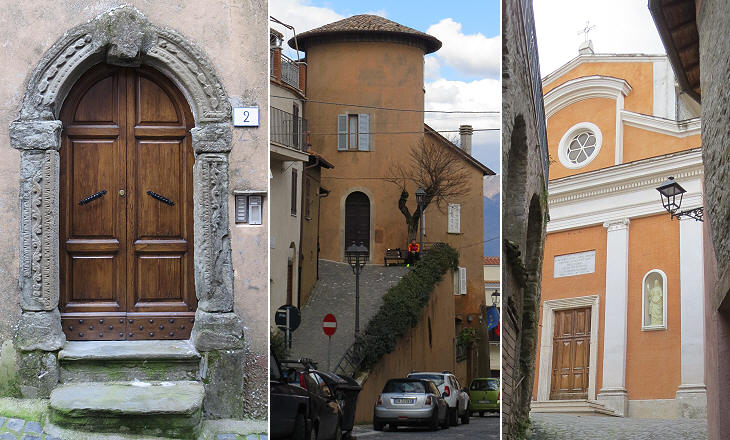 (left) Door decorated with old lintels; (centre) modified tower of the former castle; (right) modern parish church which has replaced that built by the Theodoli

The Theodoli acquired Pisoniano together with S. Vito which is three miles away. Pisoniano is smaller and situated at a lower altitude than S. Vito on the eastern side of Monti Prenestini. Until 1871 it was known as Pisciano, but the word can also mean a basic body function so it was changed into Pisoniano with reference to Lucius Calpurnius Piso, a Roman consul who had a villa near the town. 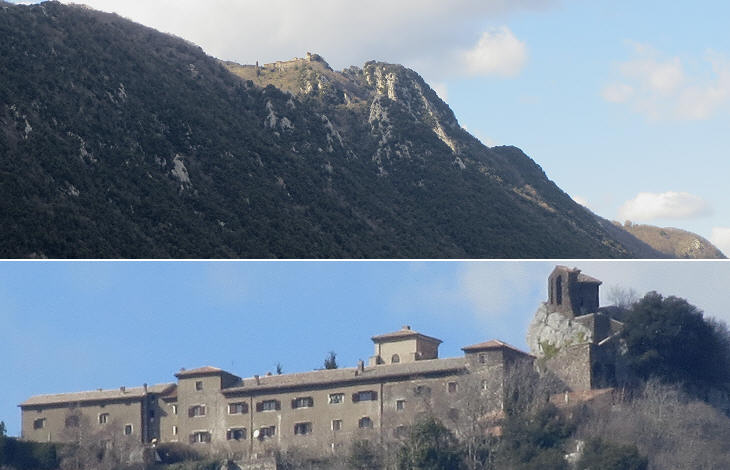 Pisoniano is situated at the foot of Rupe di Guadagnolo, a rocky peak near which a shrine was founded by the early Christians. It was rebuilt in the XVIIth century and it is known as Santuario della Mentorella, which is believed to be a corruption of mons vulturum, mountain of the vultures. The shrine is dedicated to Mary, but according to tradition it stands where St. Eustace, a Roman soldier and Christian martyr, saw a cross between a stag's antlers. It was part of the fiefdom of Poli and the heart of Pope Innocent XIII, who belonged to the family of the Dukes of Poli, is buried in the church of the shrine. Pope John Paul II visited Santuario della Mentorella on October 29, 1978, thirteen days after his election.