- Poli
(detail of a ceiling at Palazzo Conti at Poli) 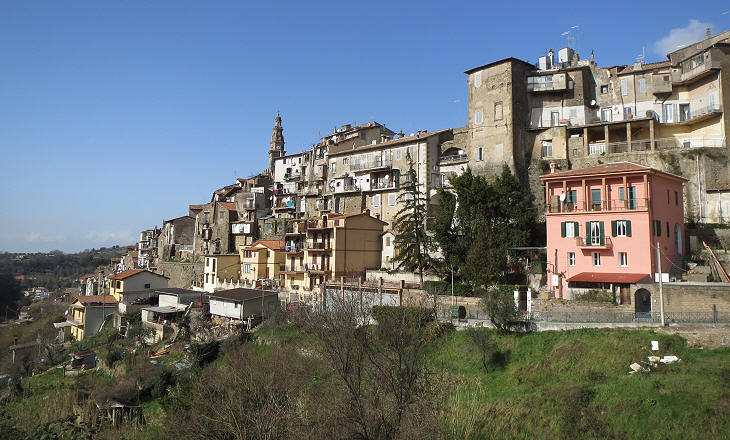 The valley of Poli is very narrow and runs up about three miles into the mountains. It is formed by two principal streams and several smaller which pour down the sides of the hills (..) The town stands on a narrow ridge of dark rock between its two rivulets. The stone it is built of is so like the rock that it looks as if it had grown out of it and embosomed in thick woods and overtopped by mountains it shows like a mountain eagle's nest as one approaches it.
Lady Maria Callcott (Maria Graham) - Three Months Passed in the Mountains East of Rome: During the Year 1819. 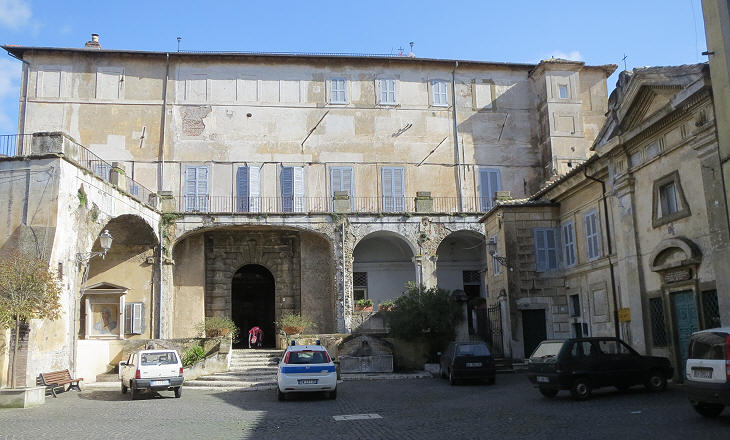 Not many Romans would immediately answer the question: Where is Palazzo Conti in Rome? And yet they have seen it many times as does even the most cursory visitor to Rome, because Palazzo Conti (or Poli) provides the background to Fontana di Trevi. The Conti di Poli were a branch of the Conti di Segni, who acquired enormous power in 1198 when a member of the family became Pope Innocent III. Unlike other small towns which belonged to many families, Poli was a fiefdom of the Conti for more than six centuries until the death of Michelangelo Conti without heirs in 1808. The family palace at Poli is the result of a long series of additions and modifications to a medieval fortress which was located in the highest point of the town. 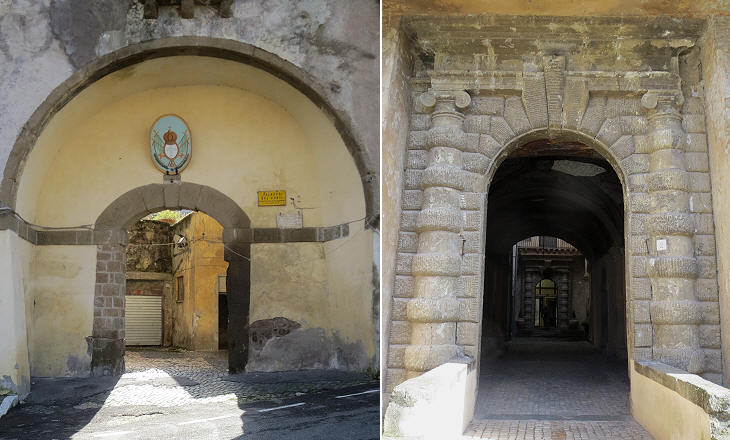 The Conti di Poli established family bonds with other important families, in particular the Farnese and the Orsini. Lotario Conti (1571-1635), Duke of Poli, was educated at the court of Cardinal Alessandro Farnese at Caprarola and he tried to give his small palace at Poli the appearance of a Farnese one.
In 1819 however the building was in very poor condition: The ground floor is now converted into a granary and storehouse and the coved ceilings painted, it should seem by the school of the Zuccheri (Zuccari), accord but ill with the filth and neglect every where visible. The fountains that adorned the court, the staircase and the balcony are all dry. Lady Maria Callcott 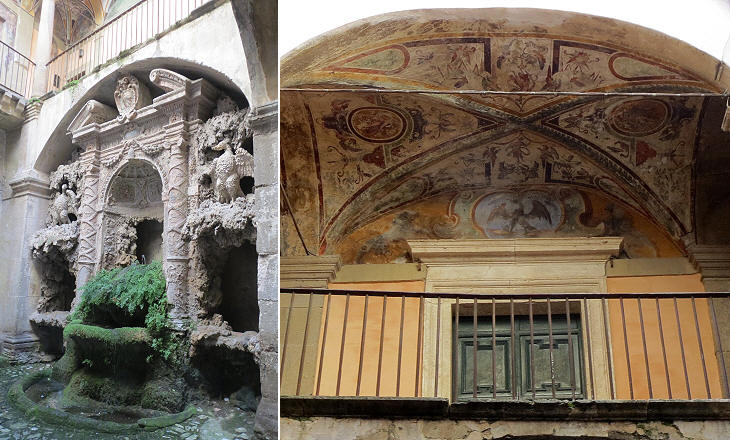 Palazzo Conti: (left) fountain in the courtyard preceding the palace and resembling those of Villa d'Este; (right) frescoes of the loggia

A chequered eagle is a recurring motif in the decoration of the palace. It was the heraldic symbol of the Conti, one of the first families to have a proper coat of arms. The image used as background for this page shows one of the two eagles of the fountain.
In 1721 Cardinal Michelangelo Conti, second child of Carlo II Conti, Duke of Poli, became Pope Innocent XIII and the ancient noble family acquired a new importance. The Pope however was sick and old. He died in 1724 and was buried in a stucco monument in S. Pietro. The monument was removed in the XIXth century and the body was placed in an ancient sarcophagus in the Vatican Grottoes. 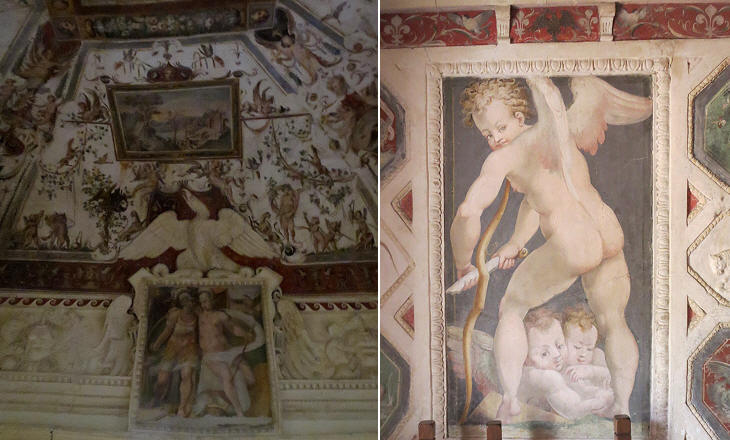 Palazzo Conti: paintings on the ceiling (left) and in the main bedroom (right)

Today Palazzo Conti is the Town Hall. In 1983 a restoration unearthed some frescoes in the main bedroom which had been covered, perhaps because of their nudities. That portraying Cupid was inspired by a painting by Parmigianino now at the Kunsthistorisches Museum of Vienna - it opens in another window. 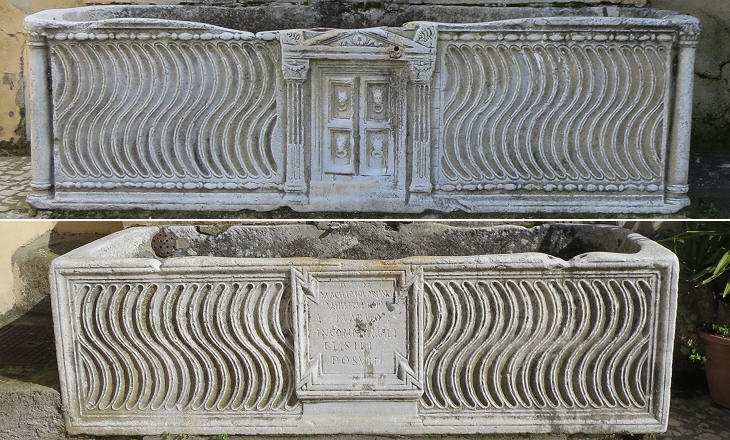 Ancient sarcophagi in the main square

The territory of Poli was populated at the time of the ancient Romans and the Dukes were able to gather a small collection of antiquities. According to a popular tradition Poli owes its name to Polustia, a town mentioned by Dionysius of Halicarnassus, who wrote a history of Rome from its foundation to the First Punic War. An inscription placed by the Dukes of Poli at the main gate supported this opinion, which today is regarded as wrong because the location of Polustia is believed to have been in the proximity of Anzio. The name most likely derives from Castrum Pauli, because in the XIth century Poli belonged to the monks of S. Paolo fuori le Mura. 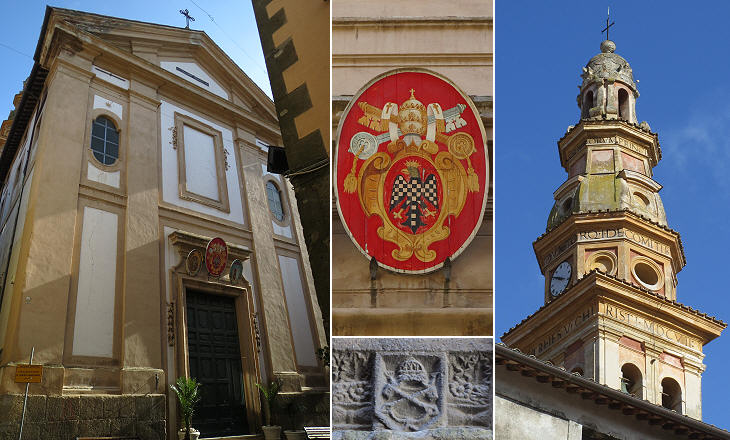 Lotario Conti provided his hometown with a new parish church with an adjoining very tall bell tower which is visible from a great distance. Its design is very unusual and it was probably motivated by the desire to place a very long inscription celebrating Lotario on its three cornices. 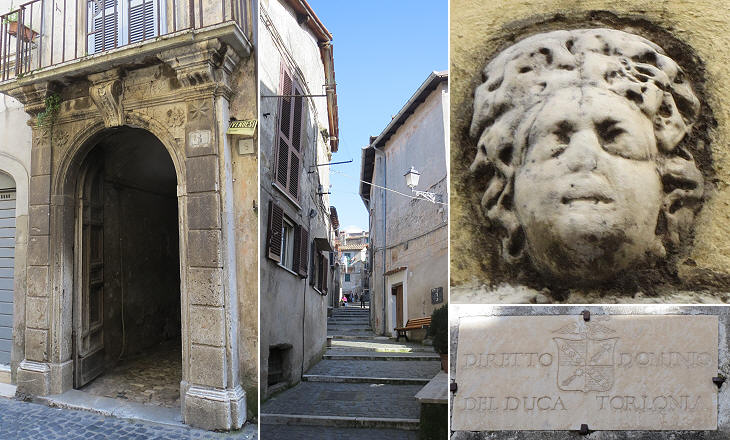 The whole town only consists of one street and two small squares. For the little lanes leading out of the street to the low houses partly built and partly excavated in the rock, hardly deserve even that humble name. (..) The town and palace are now on sale and it is said that Madame Letitia Buonaparte is in treaty for it at the price of 90,000 crowns. Lady Maria Callcott.
The initial section of the street between Palazzo Conti and S. Pietro is straight and relatively wide with some fine buildings. In 1819 Napoleon's mother had just bought Palazzo d'Aste and she did not buy Poli. The Bonaparte were already members of the Roman aristocracy as Princes of Canino. Poli was eventually bought by the Torlonia, rich bankers who wanted to acquire fiefdoms granting noble titles. 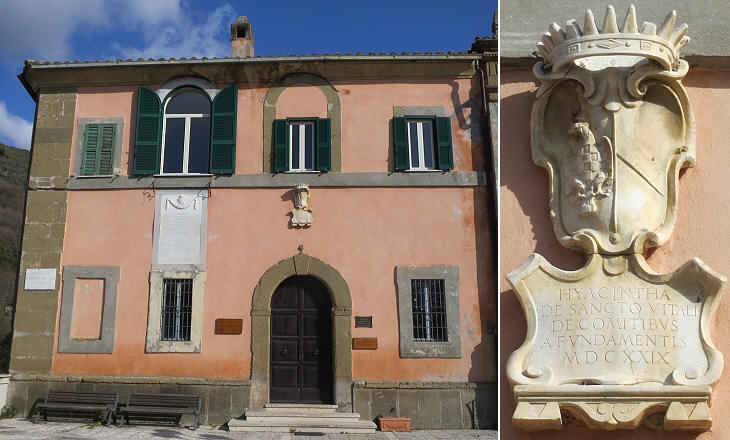 In 1597 St. Joseph Calasanz founded the first public free school of Rome in two rooms of the sacristy of S. Dorotea in Trastevere. In the following years he founded other schools in Rome. The Dukes of Poli asked for his advice to provide their subjects with a school, which they eventually built in 1629. The Conti had close ties to the Farnese of Parma and the Sanvitale were a noble family from Fontanellato, near Parma. 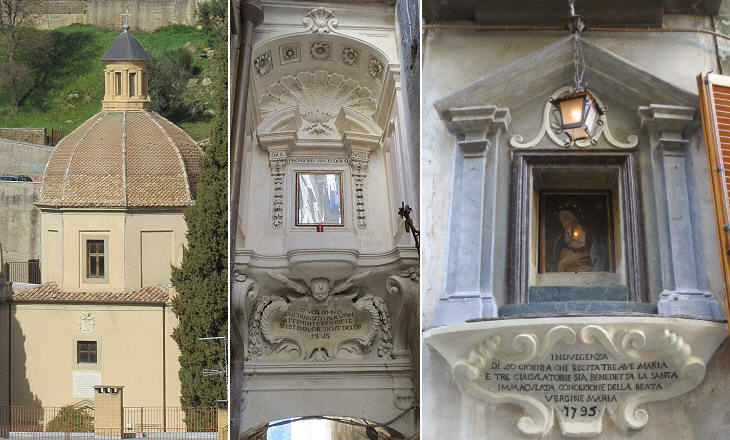 The highest point of this last ridge is the rock of Guadagnola, two hours walk from Poli. There one company of the banditti stationed itself and thence made excursions to our very gates. Lady Maria Callcott. Her stay at Poli was shortened by the fear that brigands might storm the town.