- Castel S. Pietro Romano
(detail of a ceiling at Palazzo Conti at Poli) 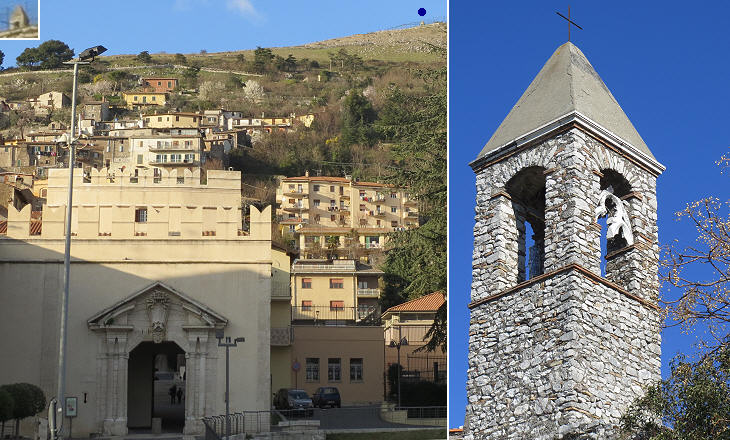 Yet wider becomes the horizon if you ascend to the ancient fortress above the palace. It crowns the summit of the Palestrina mountain, and is reached, in a short hour, by a steep and fatiguing climb over bare limestone rocks. It was a hot August midday when I scaled that airy height, and although the sun blazed hotly, the air felt cool and fresh to me. A small settlement called San Pietro nestled itself in here in very ancient days. Already, in the sixth century, a convent existed.
Ferdinand Gregorovius - Aus der Campagna von Rom (About the Roman Campagna) - 1858 - translation by Dorothea Roberts
Castel S. Pietro can barely be seen from Palestrina because of the steepness of the hill. Blessed Margherita Colonna, a XIIIth century nun, lived as a hermit at S. Maria della Costa. The name indicates that the church was situated on the edge of the hill. By moving a few miles away from Palestrina it is possible to have a good view of Castel S. Pietro. The small town is even visible from Rome and Giuseppe Vasi showed it in his 1765 Grand View of Rome. There is no name but its location above Palestrina leaves no doubt about Vasi having depicted the small town. 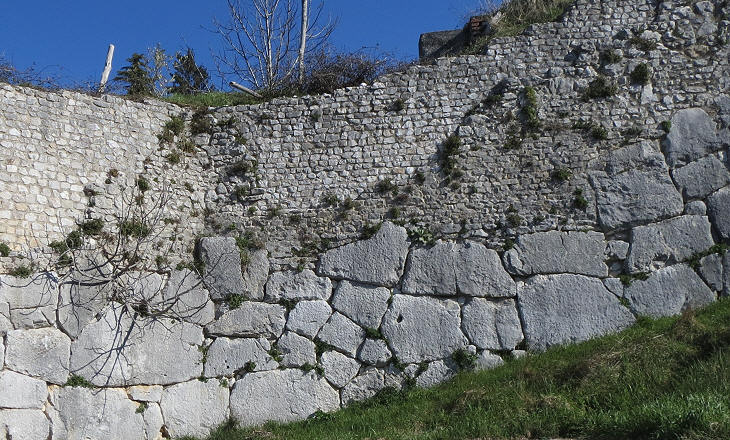 Walls which surrounded the acropolis of ancient Praeneste

Praeneste (..) was once the mistress of Latium, older than Alba Longa, older, far, than Rome. Her Cyclopean walls bear witness to this. They rise above the present town in two concentric rings to fortify the arx, or citadel, crowning the mountain top; so inaccessible does it appear as to be almost impregnable. Gregorovius
The top of the hill was the acropolis of Praeneste and it was protected by walls similar to those of other very ancient hill towns of the region such as Alatri and Segni. They are called polygonal walls because their boulders do not have a regular size and shape, but also cyclopean because it was thought that only giants could have lifted them. 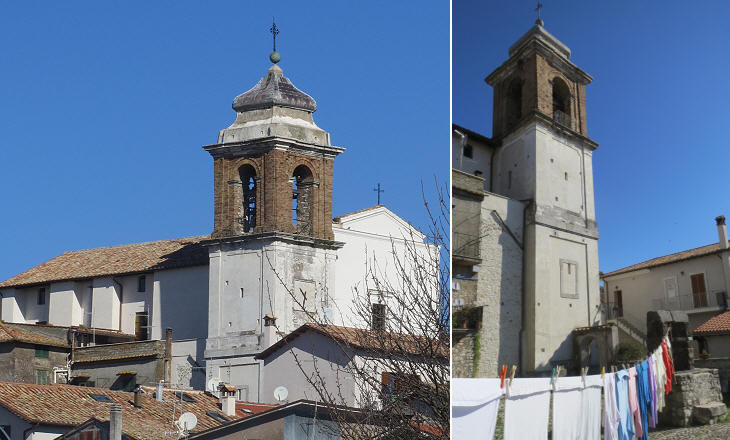 The modern village of San Pietro is a place so dilapidated and crumbling, so bare and colourless, that it looks as if it had been transported from Africa to this windy height. Here the Roman Catholic Church believes that St. Peter dwelt for some time, and here, in the church, he is commemorated in a statue by Bernini.
Augustus J.C. Hare - Days near Rome - 1875
Hare would have been surprised to learn that many Italian movies of the 1950s were shot at Castel S. Pietro because it was regarded as a very picturesque location. The image used as background for this page shows actress Gina Lollobrigida in Bread, Love and Dreams (Pane Amore e Fantasia), a 1953 movie shot at Castel S. Pietro. 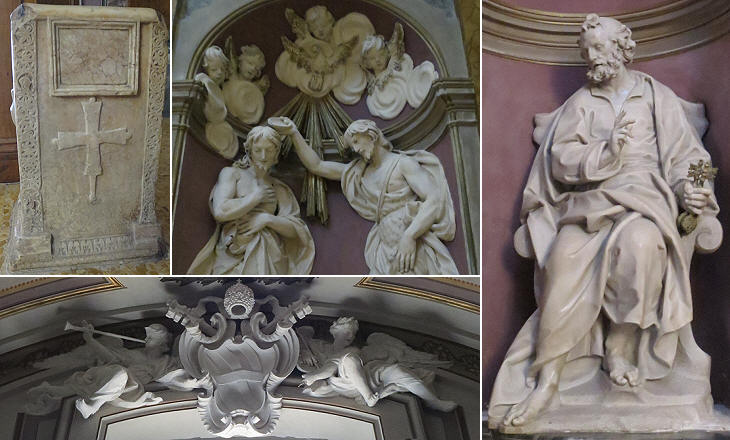 The church was built in ca 1732 at the initiative of Cesare Stefano Mocci, a local lawyer who was on friendly terms with Pope Clement XII, who financed the construction. The Pope is remembered by a bust and a coat of arms supported by flying Fames, similar to the gigantic ones designed by Paolo Benaglia at Fontana di Trevi and Palazzo della Consulta. 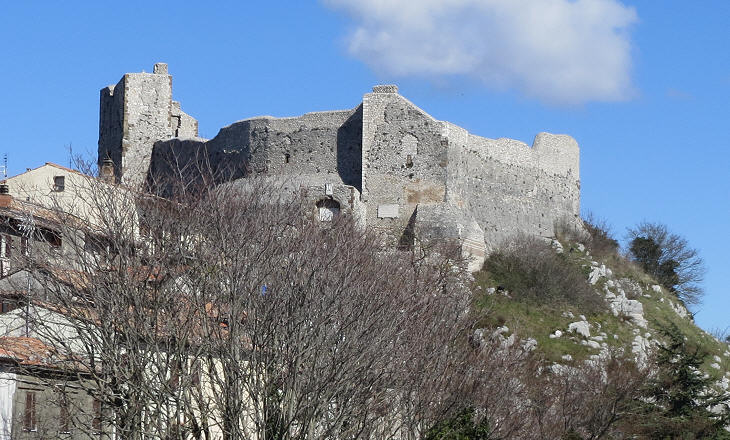 A mediaeval fortress was built on the spot of the arx (..) the walls and shattered towers still standing, almost smothered in yellow broom, and covered with masses of luxuriant ivy. Here the unfortunate Conradin was held a prisoner after the battle of Tagliacozzo, and from this place he was led forth to suffer on the scaffold in Naples. (..) When a Colonna of the middle ages looked down from the windows of the old palace or castle, he might venture, as he gazed upon his possessions, to feel that he was the richest and mightiest chieftain in Latium. Gregorovius

Rocca dei Colonna: details and 1482 inscription and coat of arms of Stefano Colonna

The castle was for many centuries a stronghold of the Colonna, but it was razed to the ground more than once. It was rebuilt in 1482 by Stefano Colonna. Because of its remote location it was often used as a prison.

North-western view over the Roman Campagna (above) and Rome (below - S. Pietro is clearly visible)

The inhabitants of Castel S. Pietro enjoy a view, whose beauty is indescribable. Here a great part of Latium lies spread out beneath the eyes on one side, and of Tuscany or the patrimony of S. Peter's on the other, a great and classic district, whence rise the Latin and Volscian mountains, between which a wide plain opens, reaching to the distant glancing sea. There is the world-town Rome steeped in the mist; there stands the island-like Soracte; hard by rise the mighty chains of the Apennines; on the left, at their feet, is the deep beautiful valley of the Sacco, over which shine the gleaming hill-towns of Monte-Fortino and Segni; further are the heights of the Serra, and the airy chiefs of all these hills, whose varied forms lose themselves in the sunny atmosphere beyond Anagni and Ferentino. One looks upon these plains and hills, bedecked with towns and villages, of which most are rich in associations, and the early history of Rome, the story of the empire, or of the middle ages, comes back to one's recollection, and when one feels that Umbria, the Sabina, Latium, the Equian territory, the land of the Hernicans, Etruria, the Volscian country, the Alban hills, and the sea are united in one panorama, one appreciates the grandeur of this view. Gregorovius. 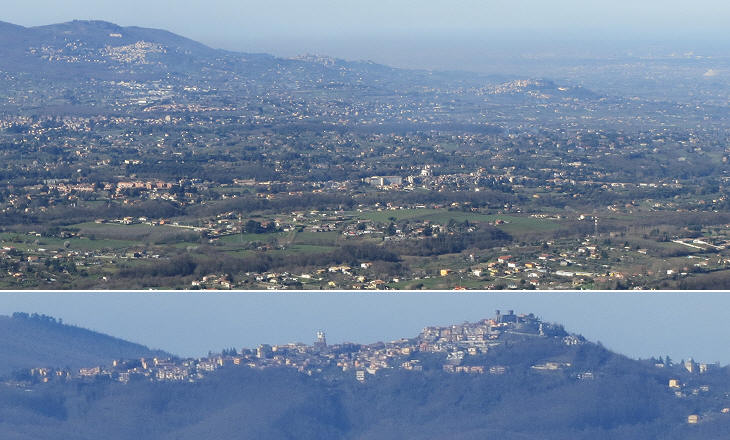 Western view towards Monte Compatri, Zagarolo and Colonna (above - left to right) and Rocca Priora (below) 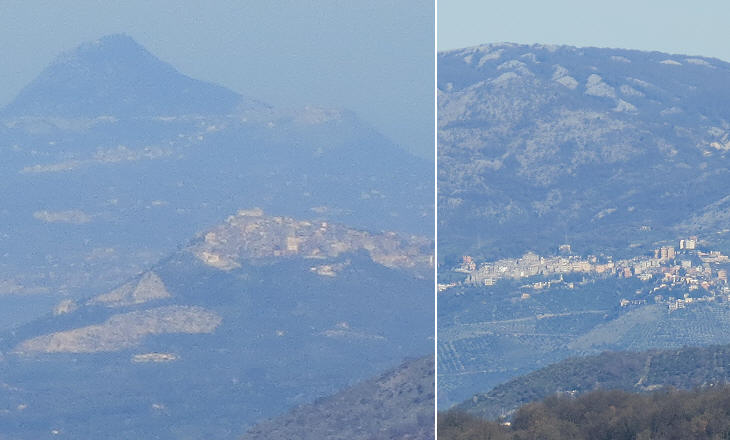 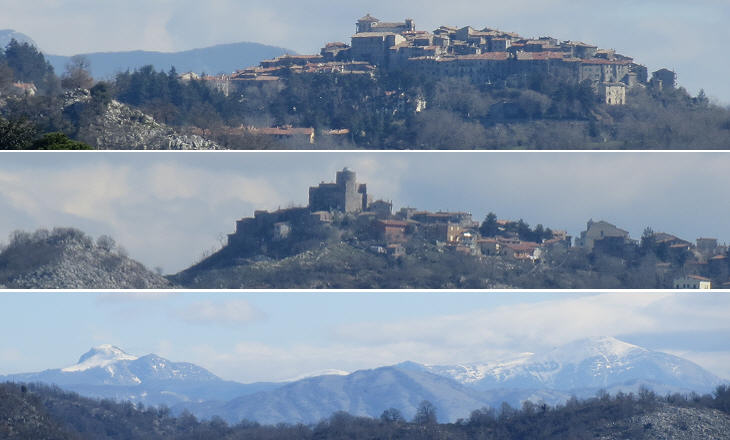 Eastern view: (above) Capranica Prenestina; (middle) Rocca di Cave; (below) Apennine mountains near Subiaco. All photos were taken in late February 2014 in the morning after a series of rainy days