- S. Angelo Romano and Montecelio
(a terrace in Palombara with a telescope to see Rome) 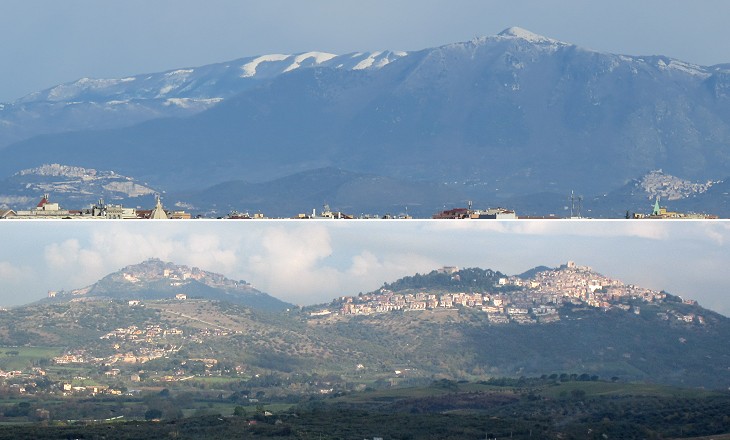 Because of their isolation S. Angelo Romano and Montecelio are a landmark of the Roman Campagna. In Days near Rome published in 1875 Augustus J. C. Hare made references to them repeatedly in describing his daily excursions from Rome.
(en route to Tivoli) Across the Campagna, on the left, near the Sabine mountains, the picturesque little hills called Montes Corniculani may be seen, their three summits occupied by the villages of S. Angelo, Colle Cesi, and Monticelli.
(en route to Monte Gennaro) We leave a little to the right the low isolated hills called Montes Corniculani. Their southern height is occupied by the village of Monticelli the next by Colle Cesi, the northern by S. Angelo in Capoccia.
(en route to Veii) The eye (..) stretches away to the triple paps of the Monticelli, and to Tivoli.
(en route to Colonna) Monticelli and S. Angelo glitter on their hill-tops. 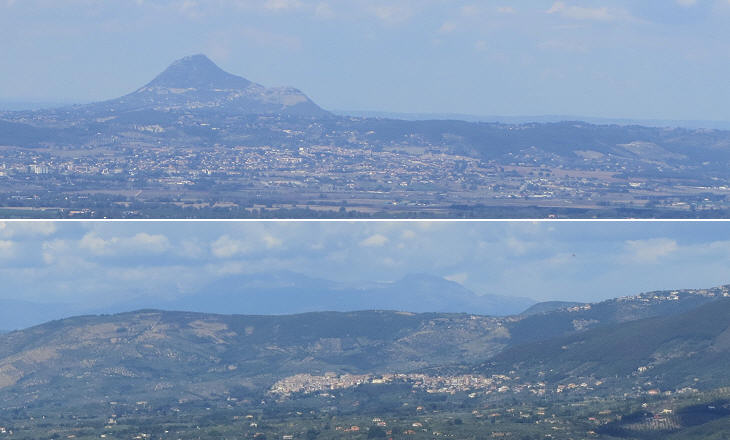 Views from S. Angelo Romano: (above) Mount Soratte and the River Tiber valley; (below) the Sabine hills and in the distance Mount Terminillo

Hare however did not suggest his readers actually go to these hill towns, which similarly were ignored by all Grand Tour travellers. Yet they offer striking views over the countryside to the east of Rome. The image used as background for this page shows the dome of S. Pietro seen from Montecelio. 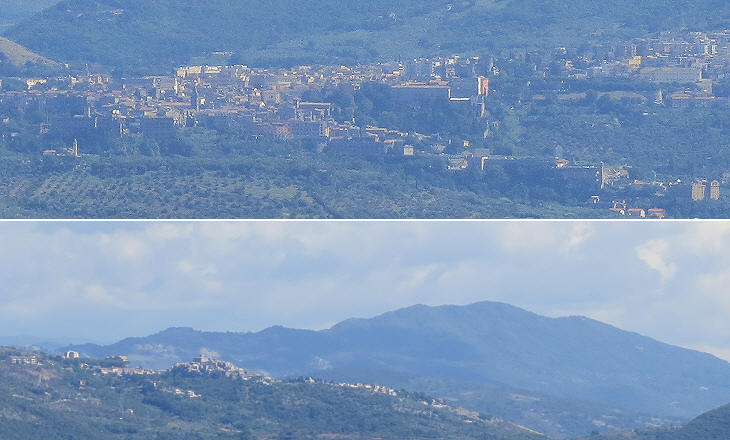 Views from S. Angelo Romano: (above) Tivoli (the medieval town to the left and Villa d'Este to the right); (below) S. Polo dei Cavalieri and behind it the mountains near Subiaco The small town was known as S. Angelo in Capoccia until 1878 when it changed its name. The old name was a reference to the Capocci, a Roman family of Rione Monti, where two tall towers are named after them. S. Angelo was eventually conquered by the Orsini, but with the decline of this family in the XVIth century it was sold to the Cesi in 1594. Historians have struggled to associate S. Angelo with one of the ancient towns of Latium mentioned by Livy, but they have not reached unanimous conclusions. Hare indicated S. Angelo was the site of Corniculum, a Sabine town conquered by King Tarquin the Elder, but today Corniculum is associated with Montecelio. What is certain is that the hill was an early Roman conquest because of its commanding position. 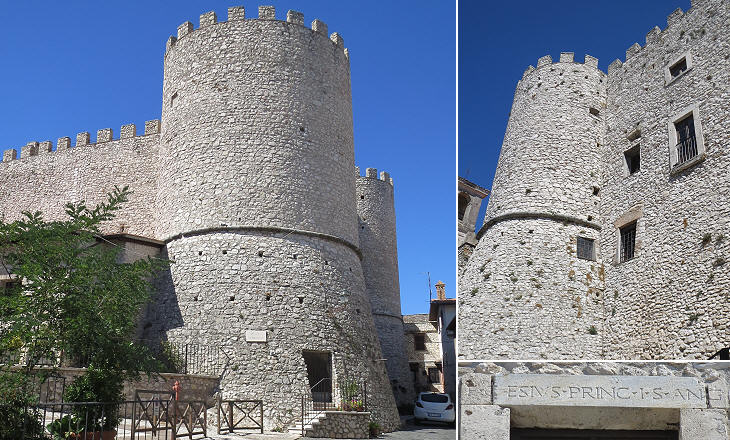 When the Cesi acquired S. Angelo, the military importance of the town had greatly diminished and the fortress built by the Orsini was not strengthened. Changes were made to the western side of the fortress which enjoys a commanding view in the direction of Rome in order to obtain a residential apartment. In 1612 Pope Paul V gave Federico II Cesi the title of Prince of S. Angelo. The title of prince usually indicates the aristocratic level immediately below that of king and it is rather difficult to associate it to the tiny fiefdom of S. Angelo. Federico II Cesi continued to be best known as the Duke of Acquasparta, a town in Umbria, from where his family came.
In 1672 S. Angelo was sold to the Borghese. 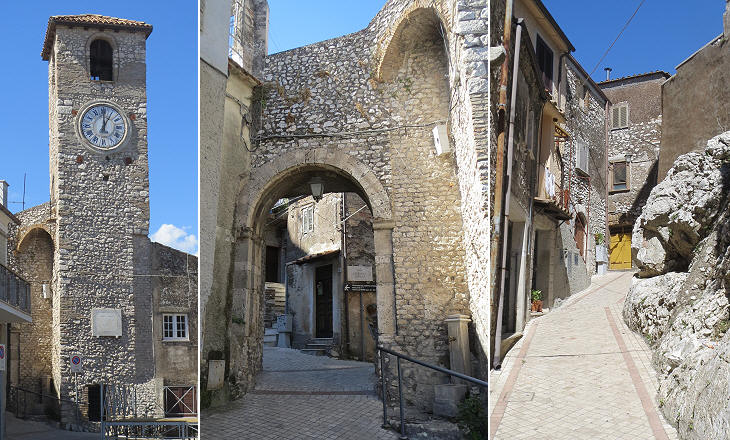 (left) Tower at the side of the main gate; (centre) main gate; (right) a street in the old part of S. Angelo

The Borghese were not interested in residing at S. Angelo and the fortress was utilized as a granary. The reason why S. Angelo and nearby Montecelio, notwithstanding their commanding views, were not selected as locations where to spend the villeggiatura (holiday in the countryside) lies in the smallness of the two towns and in the fact that, unlike Frascati and Castelgandolfo, there are no places where to walk without going up or down very steep lanes. 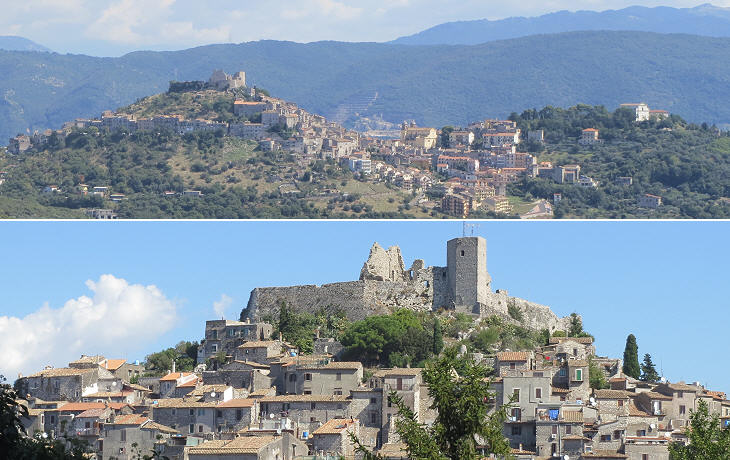 Montecelio seen from S. Angelo Romano (above) and from S. Francesco (below)

Monticelli means small mountains and it was used in medieval documents to indicate Montecelio, S. Angelo and another hill (Poggio Cesio) in between. The fortress of Montecelio was built in the Xth century, perhaps on the site of an ancient temple. The small town developed at the foot of the castle. In the XVIth century its population grew because ancient quarries of travertine along Via Tiburtina were reactivated and stonecutters from other locations settled at Montecelio. The town expanded on a saddle between the castle and a nearby hill where the Franciscans had built a monastery. 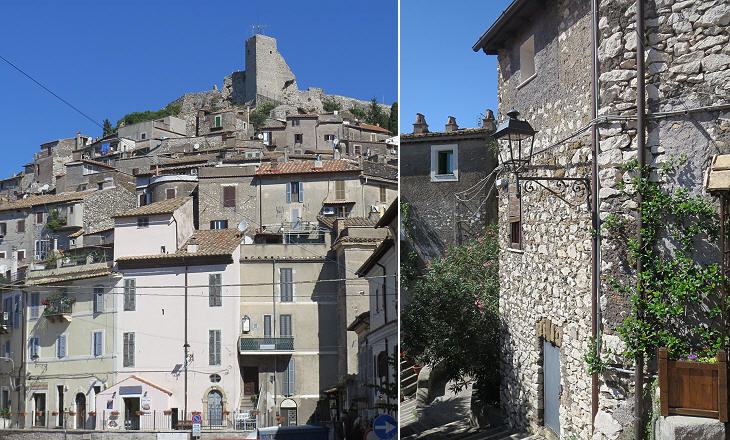 Most old houses of Montecelio have been faced, but some of them still show the rows of light-coloured stones with which they were built. Montecelio is part of a municipality which includes Guidonia, a modern town built on the plain in the 1920s which has become a suburb of Rome. Old Montecelio however is not abandoned as many migrants live there because rent is inexpensive. 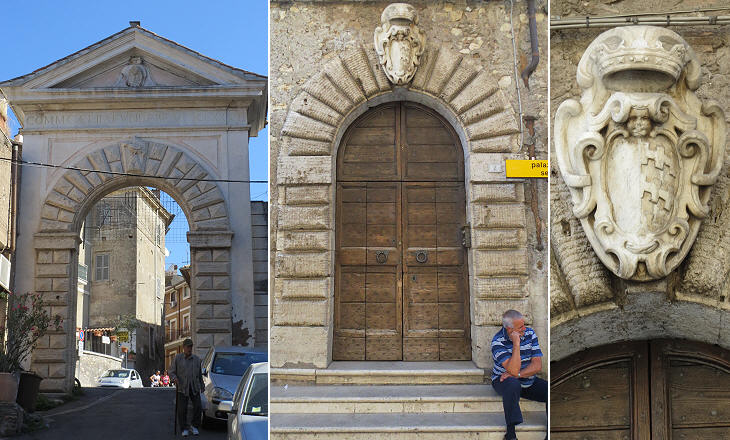 The Cesi acquired Montecelio at the same time as S. Angelo Romano and they built a small palace in the new neighbourhood. It was eventually split into flats and largely modified so that only the portal belongs to the original building. The coat of arms indicates that Montecelio was eventually acquired by a branch of the Borghese family who had inherited parts of the Aldobrandini assets, the family of Pope Clement VIII (learn more about the Borghese Aldobrandini relationship). 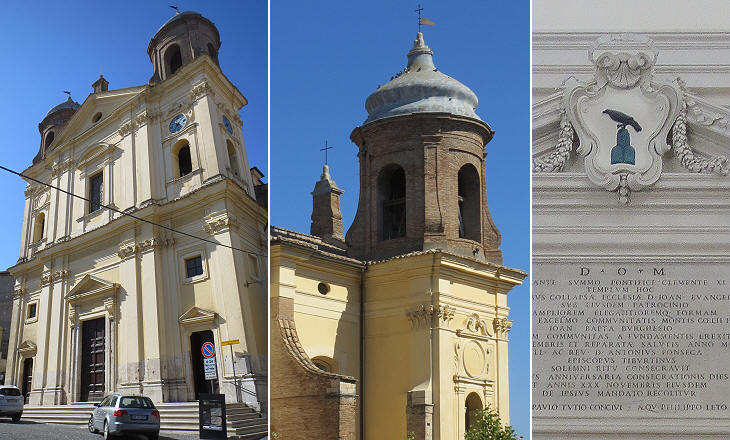 S. Giovanni Battista: (left) façade; (centre) one of the bell towers; (right) inscription and coat of arms of Montecelio in the interior

In the early XVIIIth century Filippo Leti was one of many architects who earned their living by designing the decoration of chapels or ephemeral buildings for celebrations such as those which followed the election of a new pope. In 1705 he had the opportunity to design an entire new church at Montecelio. In 1710 S. Giovanni Battista was completed. Prince Giovanni Battista Borghese helped to finance its construction, but the inhabitants were the main contributors (as they were for Porta di S. Maria).

Return to Mentana, Monterotondo and Palombara or move to Marcellina and S. Polo dei Cavalieri