Dante's Divina Commedia is not only the founding poem of the Italian language, but also a sort of XIVth century world encyclopaedia. In general people and locations quoted in the poem did not come out well, because Dante was more of a lasher than a flatterer. In the following verses he described the wood where the souls of the suicides are punished. 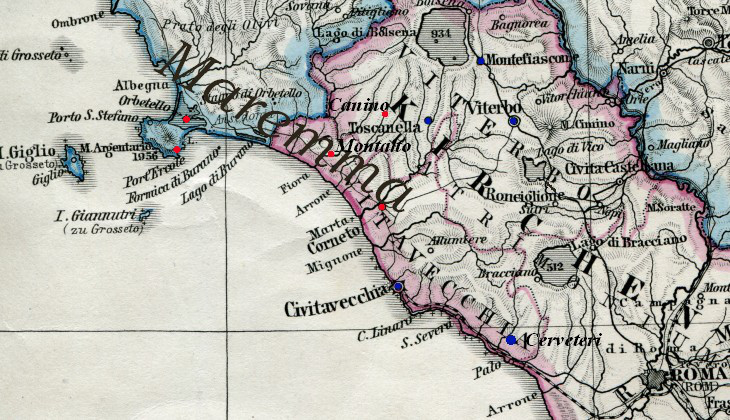 Dante gave a description of Maremma, the maritime land between Cecina (south of Leghorn) and Corneto which remained true for centuries. The marshes along the coast nurtured the Anopheles mosquitoes which spread malaria. The wild woods were the kingdom of boars and a boar became the symbol of Maremma (in the icon at the top of the page a Renaissance fresco by il Falconetto at Palazzo d'Arco in Mantua showing Meleager hunting the boar). The northern part of Maremma lies in Tuscany and it was part of the Republic of Siena and later on of the Grand Duchy of Tuscany. The southern part lies in Latium and it was part of the Papal State.

Dante quoted Corneto also in a long list of sinners who hurt others:

Rinier da (from) Corneto was a brigand known for robbing pilgrims on their way to Rome. There were brigands in this part of Maremma until the end of the XIXth century. 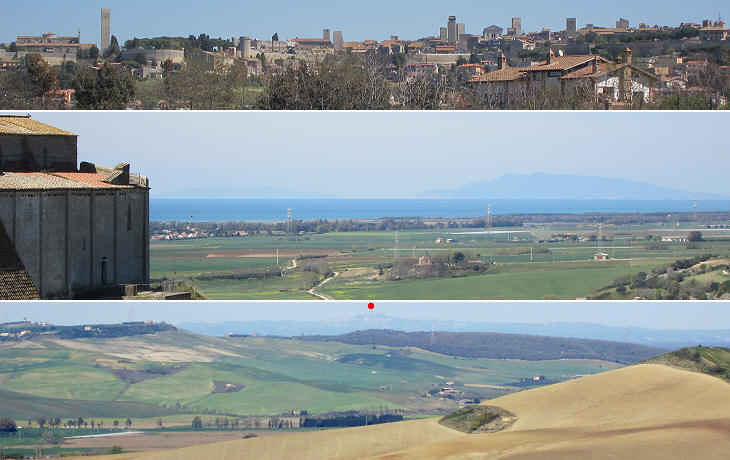 Views (in descending order): the town from Via Aurelia; Giglio Island (left) and Monte Argentario (right) from S. Maria in Castello; valley of the Marta River and Montefiascone (red dot) in the distance from Porta Nuova

We soon saw Tarquinia, its towers pricking up like antennae on the side of a low bluff of a hill, some few miles inland from the sea.
David Herbert Lawrence - Etruscan Places - Published in 1932, but based on a visit made in April 1927.
The view is most beautiful of the orange-coloured cliffs which are crowned by the towers of Corneto, and, beyond, of the wide expanse of blue sea with the beautiful headland of Monte Argentario, its neighbouring islets of Giglio and Giannutri, and, in the distance, Elba, and even Monte Cristo.
Augustus J. C. Hare - Days Near Rome - 1875
We walk to the parapet, and suddenly are looking into one of the most delightful landscapes I have ever seen: as it were, into the very virginity of hilly green country. It is all wheat-green and soft and swooping, swooping down and up, and glowing with green newness, and no houses. Down goes the declivity below us, then swerving the curve and up again, to the neighbouring hill that faces in all its greenness and long-running immaculateness. Beyond, the hills ripple away to the mountains, and far in the distance stands a round peak, that seems to have an enchanted city (Montefiascone) on its summit. Lawrence
Corneto is located on a hill overlooking the Marta River, a few miles from its mouth where the town had its harbour. In 1922 it was renamed Tarquinia in memory of a nearby ancient Etruscan town which played a major role in the early days of Rome. Tarquin the Elder and Tarquin the Proud, the fifth and the last king of Rome, are believed to have been named after that town. Tarquinia was razed to the ground by the Saracens in the IXth century and the site was abandoned.
Corneto flourished in the XIIth and XIIIth centuries as an independent town and it had close relationships with Pisa and Genoa, because at the time the Marta River, which flows from Lake Bolsena, was navigable and Corneto was an important trading post on the maritime route between northern and southern Italy. 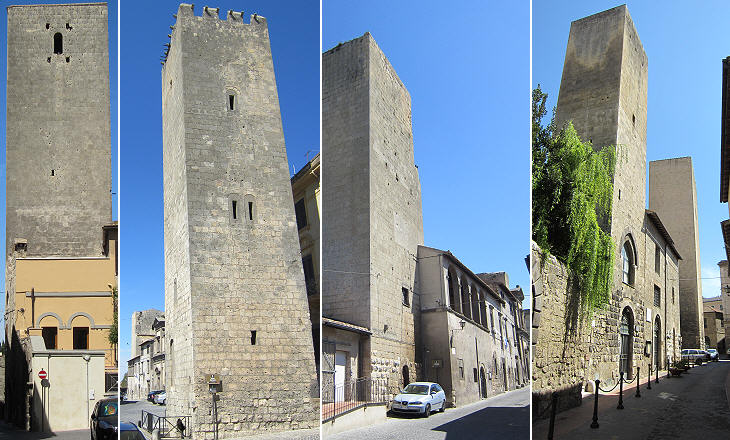 In the warm April morning the stony little town seems half asleep. As a matter of fact, most of the inhabitants are out in the fields, and won't come in through the gates again till evening. The slight sense of desertedness is everywhere. Lawrence
Corneto still retains most of its medieval appearance because after the XVth century its urban development was minimal. The most important families lived in some forty tower houses, eighteen of which still characterize the old part of the town.
N.B. In many of the images in this page the towers of Corneto appear to be leaning. This is due to a camera distortion effect. In reality they are perfectly straight. 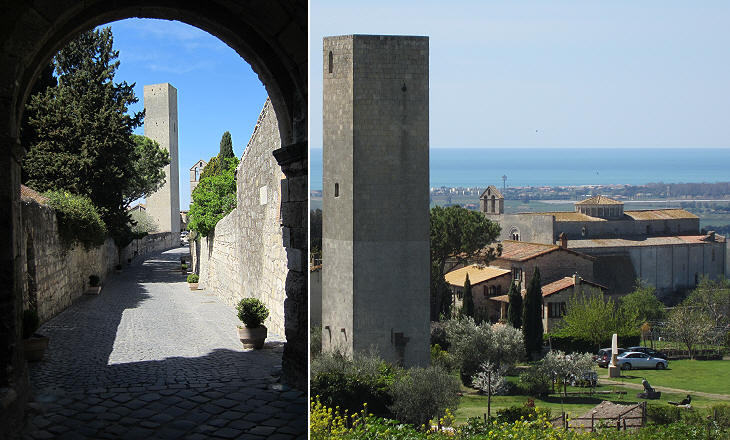 The two highest towers of Corneto are situated in the northern section of the hill near the Marta River. That of Castello protected the access to the town from the harbour. Because of its height and location it allowed early detection of ships approaching Corneto. 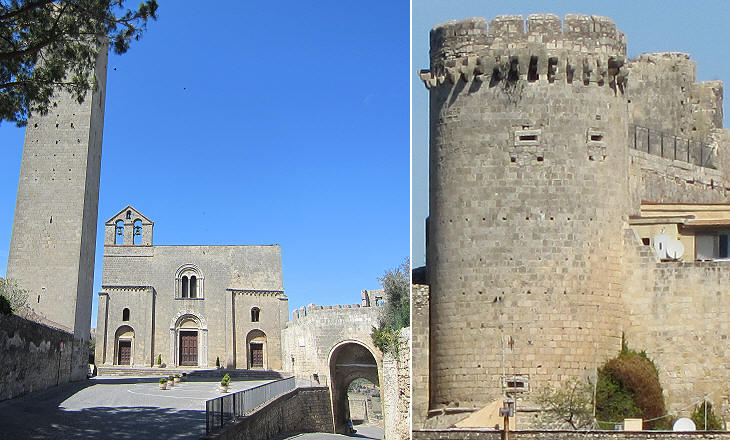 Castello means castle and it indicates a section of the walls overlooking the river which forms an almost detached fortification. A round tower protecting the access to the castle from the town is named after Countess Matilda of Canossa, who in the XIth century ruled over a large part of central Italy and who supported Pope Gregory VII in his fight against German Emperor Henry IV. As a matter of fact the tower was built in the XVth century, but perhaps it replaced an older one. 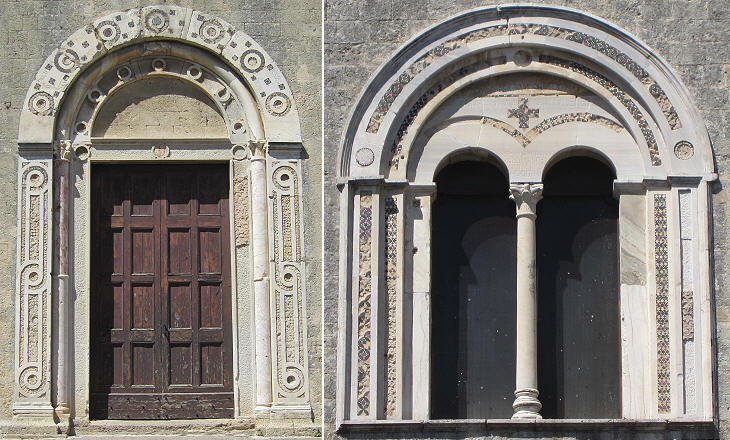 S. Maria di Castello was built in the XIIth century on the site of a church named S. Maria ad rupes (cliffs) which indicates it was located on the edge of a ravine. In order to build the new church the sloping land was terraced. The main portal and the window of S. Maria di Castello were decorated with one of the earliest (1143) examples of Cosmati work. 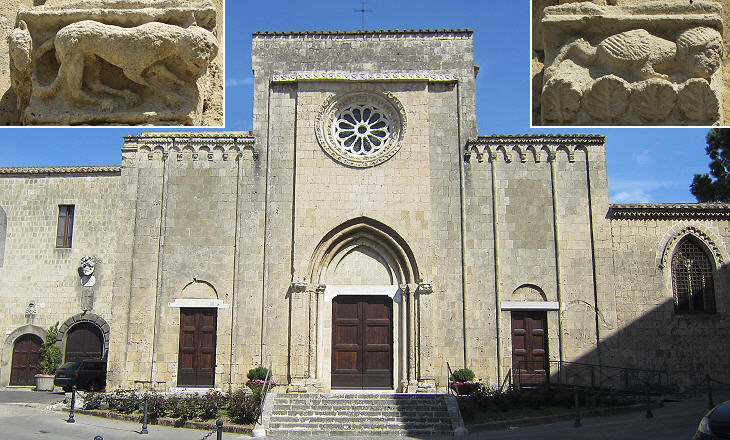 S. Francesco; the insets show two medieval reliefs at the sides of the main portal portraying a beast (left) and a harpy (right)

The majority of the churches of Corneto were built in the XIIIth century: their number and their size are signs of the wealth of the town. Churches had elaborate rose windows similar to those which characterize S. Pietro and S. Maria Maggiore at nearby Tuscania (in the background image of this page you can see the rose window of SS. Annunziata). Another feature of the churches of Corneto is the width of their façades. 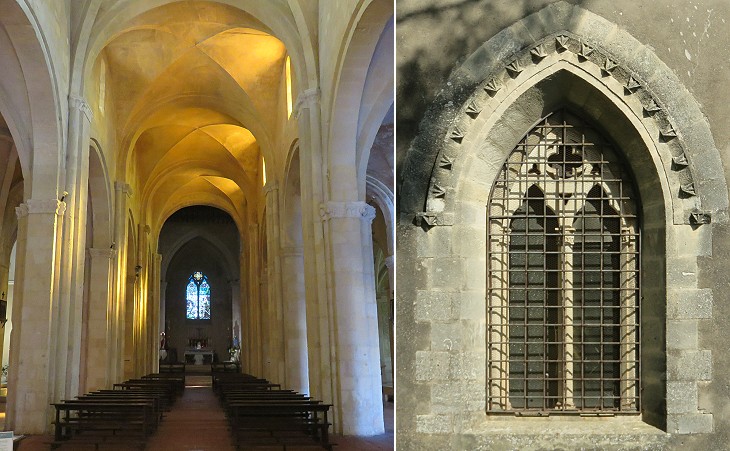 S. Francesco; (left) interior; (right) one of the side windows

S. Francesco was built in the late XIIIth century during the transition from Romanesque to Gothic style. The façade is Romanesque, but its main portal and parts of the interior reflect the move to Gothic architecture. 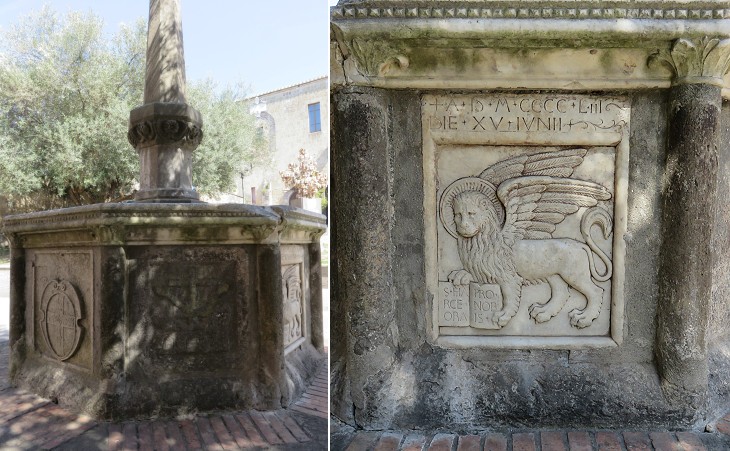 S. Francesco: well from the cloister which was turned into a public fountain

The well has a very fine relief (dated June 15, 1453, days after the Fall of Constantinople) showing the Winged Lion, the symbol of St. Mark and of the Republic of Venice; the inscription S. Marce ora pro nobis (St. Mark pray for us) however is not that which appears on the symbols of the Republic (Pax tibi Marce Evangelista Meus - Peace to you, Mark, my Evangelist). 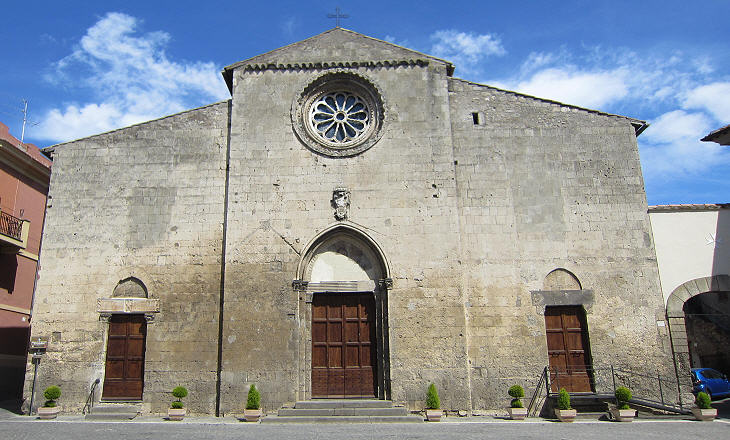 The members of the Order of St. John or of Jerusalem were knights from western Europe who provided help to pilgrims to the Holy Land. The order is often referred to as the Order of Rhodes or of Malta, because the knights moved to these islands after the Holy Land was reconquered by the Muslims. The order had many properties in the countries of origin of the knights. In Italy these properties were grouped into commende and their revenues supported the activities of the order. Italian commende reported to the Roman Priory of the order. At Corneto a large XIIIth century church was dedicated to St. John the Baptist, the patron saint of the order. S. Giovanni Battista dei Gerosolimitani: details of the façade: (left-above) rose window; (left-below) ancient Roman sarcophagus above the left portal, most likely belonging to a Christian; (right) coat of arms of the Knights of St. John, probably placed in 1609 and below it coat of arms of the Bolognetti, Princes of Vicovaro, best known for their funerary monuments at Gesù e Maria. Mario Bolognetti was a Knight of Malta

Similar to many other Italian towns, Corneto profited by the prolonged conflict between the German emperors and the popes to become a city state. In 1355 it opposed resistance to Cardinal Albornoz who was restoring papal authority in the region as a preliminary condition for the return of the popes from Avignon. In 1368 Pope Urban V landed at Corneto on his way to Rome. 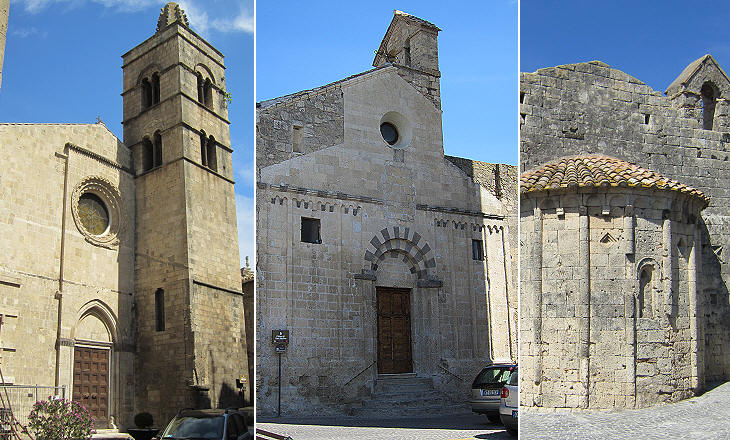 The period which followed the return of the popes to Rome was very chaotic and it is known as the Great Schism. Corneto and its countryside were repeatedly pillaged by the French mercenary troops of Francesco di Vico, whose family had many fiefdoms in northern Latium. 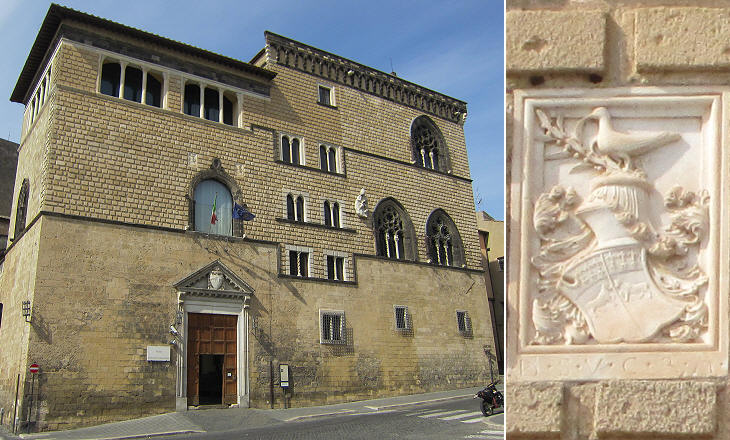 The chaotic situation caused by the Great Schism continued well into the XVth century. Pope Eugenius IV was elected in 1431; one of his first decisions was to revoke the benefits granted by his predecessor Pope Martin V Colonna to members of his family. The reaction of the Colonna was so violent that the Pope fled to Florence. The troops loyal to him were led by Bishop Giovanni Maria Vitelleschi, who in the following years managed to defeat the Colonna. He acquired such power and wealth that in 1436 he started to build a large palace at Corneto, his hometown. 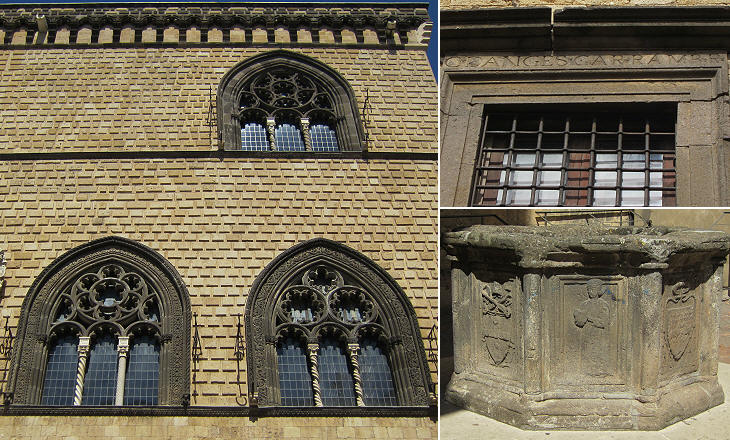 In 1437 Vitelleschi was created cardinal. At his request Corneto became a bishopric seat (diocese of Montefiascone and Corneto) which was assigned to his nephew Bartolomeo in 1438. Eventually Pope Eugenius IV became wary of the power of Vitelleschi whom he had appointed governor of Rome. In March 1440, in execution of papal orders, Antonio Rido, commander of Castel Sant'Angelo ambushed and arrested Vitelleschi who died of his wounds a few days later. This led to halting the completion of the palace at Corneto, which for this reason does not have a uniform design. You can see more of Palazzo Vitelleschi in a page covering its interior and the fine Etruscan works of art it houses, because in 1916 it was turned into a National Museum of Archaeology. 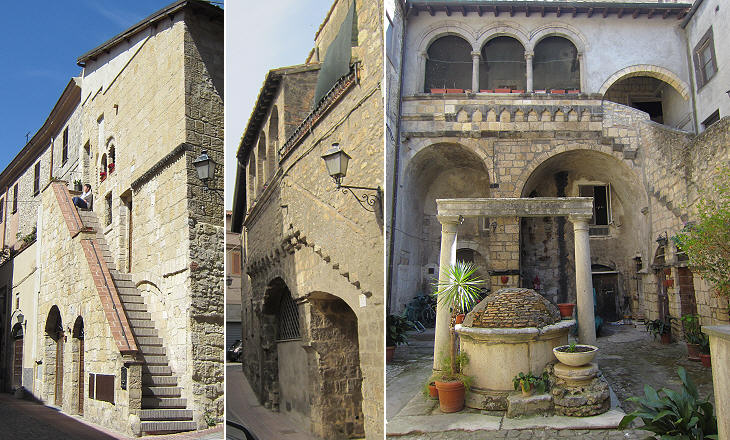 Some old houses of Corneto are characterized by profferli, decorated external staircases leading to the main door, which today are usually associated with S. Pellegrino, an almost intact medieval quarter of Viterbo, but which can be seen in other towns of the region such as Vitorchiano. 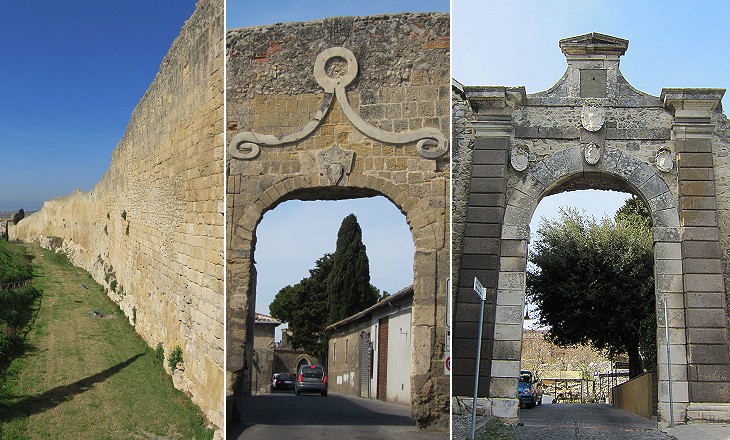 Being a bishopric seat was important for the economy of a town of the Papal State, but it did not compensate Corneto for the decline of its port. The popes of the Renaissance from Pius II to Sixtus IV and Julius II chose to enlarge and fortify the harbour of Civitavecchia to the detriment of that of Corneto.
Another reason for the decline of the town lay in the fact that in 1537 all the territory between the town and the border with Tuscany was assigned by Pope Paul III to his son Pier Luigi, the first Duke of Castro, so that Corneto was detached from its countryside.
The fact that the walls of Corneto were not strengthened with bastions or embellished with decorated gates is evidence of the low importance the popes attached to the town. 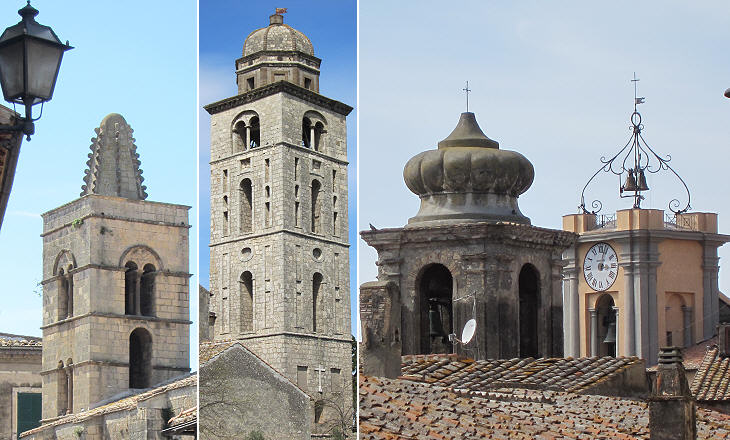 During the XVIIIth century some attempts were made to improve the living conditions of the inhabitants of Corneto and to revive the economy of the town. 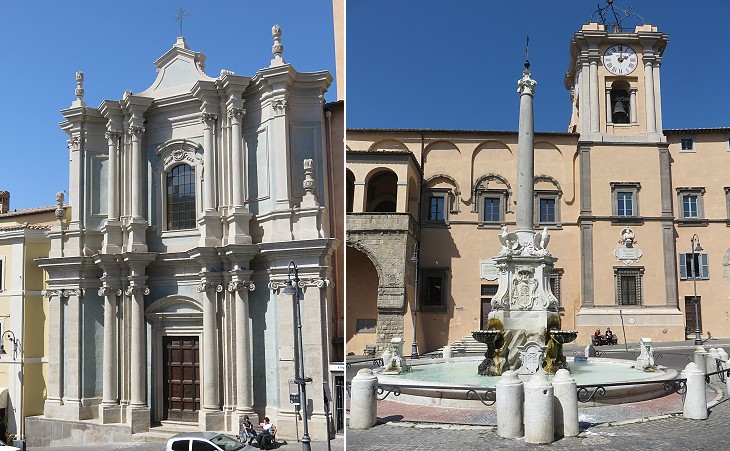 In 1724 an aqueduct and a large fountain were built at the initiative of Cardinal Giuseppe Renato Imperiali (who did the same at Nepi in 1727) and the facilities of the harbour were improved by Pope Clement XII in 1738, yet Corneto remained a small town which an 1853 French guide to Italy totally ignored, although in 1823 the discovery of painted Etruscan tombs in the proximity of Porta Tarquinia had attracted the attention of archaeologists and travellers. 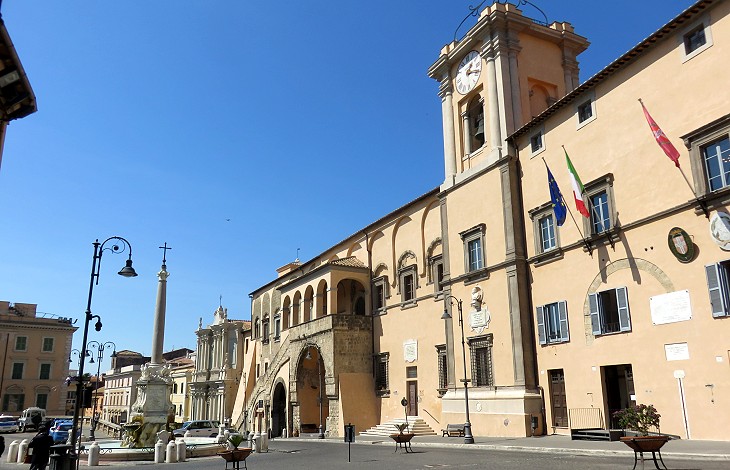 Piazza Matteotti, the main square of Tarquinia with an overall view of its monuments

Move to see Palazzo Vitelleschi and the Museum it houses or the Etruscan Necropolis of Monterozzi.

In Maremma - other locations:
Montalto di Castro and Canino