For an introduction to Maremma and a map of the region you may wish to read page one and a page on Orbetello first. 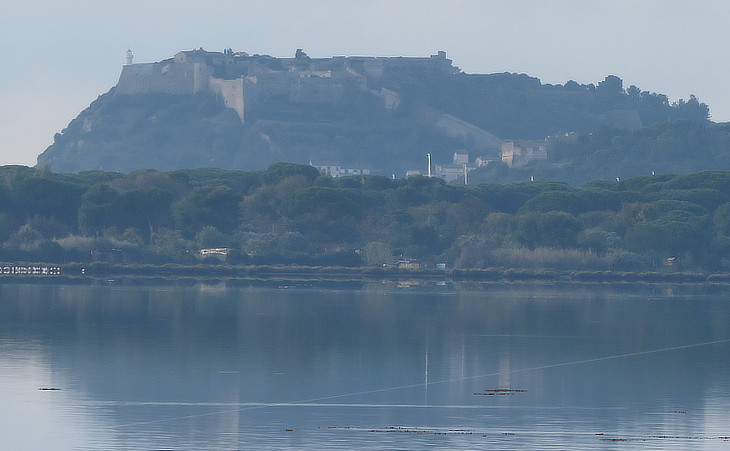 Fortress of La Rocca at Porto Ercole seen from Orbetello

Wednesday, May 13 1789. Having dined at the convent we descended to our bark, and after rowing on the lake about a mile and a half relanded. We passed by the fort of St. Filippo, which is situated on an eminence, and strong both by nature and art; and having walked two miles, we reached Porto Ercole. (..) The port is not large, and seems to have been blocked up through time and neglect. It was the Portus Herculis of antiquity, and under that name is mentioned by the classic authors. The mouth is guarded on one side by the fort of Filippo, and on the other, by that of La Rocca; and further on are the Stella and another small fortress. From the summits of these forts the eye com mands a fine prospect. These forts, with the adjoining territory of Orbitello, Monte Argentaro, &c. and Porto Lungone in the Isle of Elba, compose what is called Lo Stato de Presidii. They are considered as the keys of Tuscany, and as such retained by the courts of Spain and Naples.
Richard Colt Hoare - A classical tour through Italy and Sicily - publ. 1819 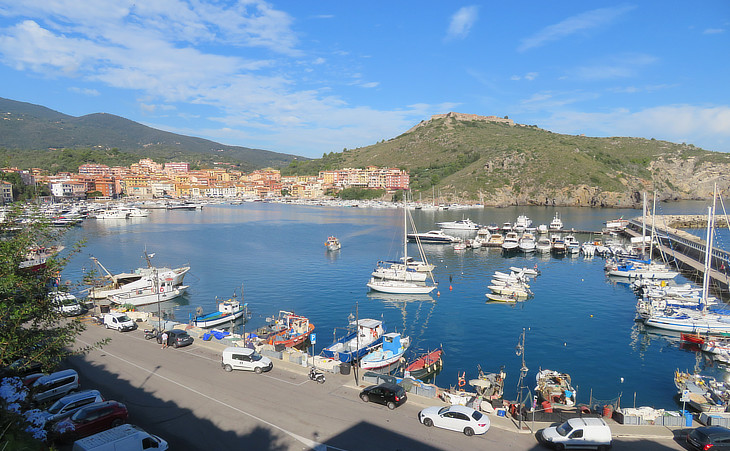 Bay of Porto Ercole from the old town

At the south-eastern base of Monte Argentaro is the fortified harbour of Port' Ercole, the Portus Herculis of the ancients. This and all the other small ports on this coast are actively engaged in the tunny fisheries, and many of the towers which are seen upon the coast are used to watch the shoals during the fishing season.
John Murray - Handbook for travellers in central Italy - 1857
At the base of Monte Argentaro on its south-eastern shore is Porto Ercole the ancient Portus Herculis, in a most beautiful situation. This was the port of Cosa (Portus Cosanus), in the territory of which town the whole of the Mons Argentarius was included.
Augustus J. C. Hare - Days near Rome - 1875
Porto Ercole became an internationally known sea resort in 1959 when Queen Juliana and the Dutch royal family chose it for their summer holidays. They continued to come to Porto Ercole through the 1970s. The old part of Porto Ercole

The appearance of this town is very singular. Built on the acclivity of a steep hill, it resembles a flight of steps; each street bearing the appearance of a landing place. (..) Near the entrance of Porto Ercole we found a good inn, and our party was increased by three friends from Orbitello. We feasted on red mullets, and excellent wine, the produce of the place; and spent a very cheerful and pleasant day. Colt Hoare
With its terrace overlooking the sea and the scent of rosemary in the air, Il Pellicano is one of the most romantic addresses in Italy, enhanced by the friendly, professional service provided by its many staff.
2022 Michelin Guide's Point Of View of the restaurant (one star)
Today, during the summer season, Porto Ercole has very many, rather expensive, restaurants for those who want to imitate Colt Hoare. 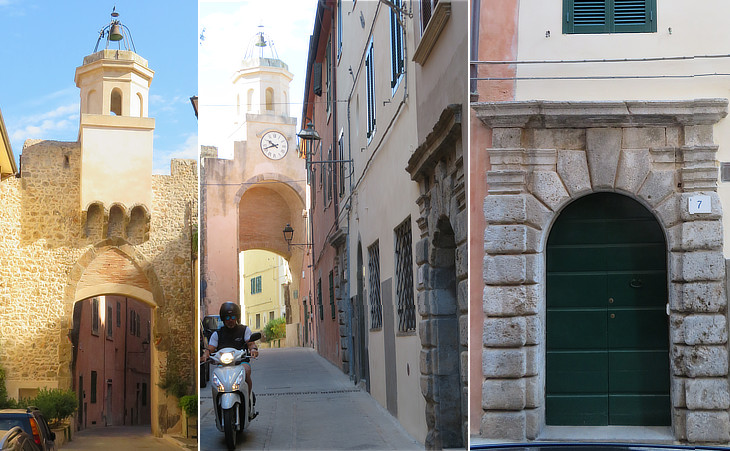 Because of its location at the southern end of Monte Argentario, the small village of fishermen was exposed to pirate raids and already during the XIIIth century it was protected by walls and by a small fortress at the top of the hill. These fortifications did not prevent Hayruddin Barbarossa (Red Beard) who established a pirate state at Algiers from conquering Porto Ercole and other ports along the coast of Tuscany in 1544.
In 1557 the Spaniards turned the old fortress (La Rocca) into a modern one and restored the walls around the village.

The small settlement was redesigned by the Spaniards and it does not have the urban layout which you would expect in a village of fishermen. Overall, considering the enormous increase of the real estate value of the site, the old town has retained its evocative aspect, especially outside the high season (the photos were taken in October). 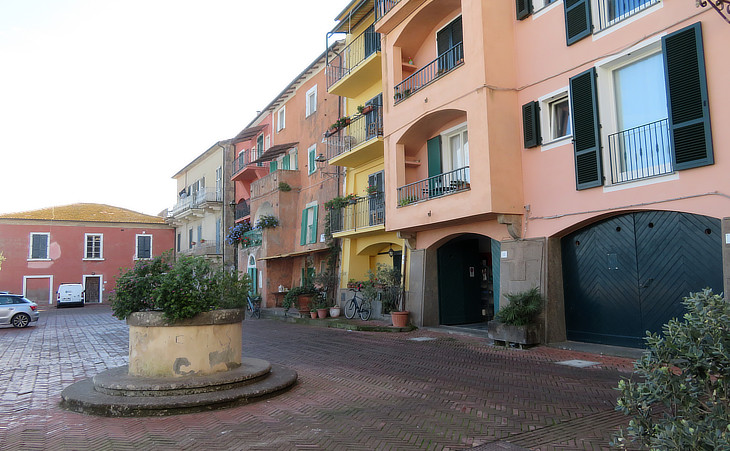 Piazza S. Barbara, the main square (under which a large cistern ensured the inhabitants would not run out of water in case of siege)

The appearance of the soldiers forming the garrison is wretched beyond description. Colt Hoare
St. Barbara is the patroness of the gunners and more in general of the garrisons of a fortress (see a chapel dedicated to her by the gunners of Castel Sant'Angelo).
A plaque at the gate (you can see it in the image used as background for this page) celebrates Caravaggio, the great Baroque painter who died at Porto Ercole in 1610.
Caravaggio felt that it was no longer safe to remain in Sicily and so he left the island and sailed back to Naples, intending to remain there until he received news of his pardon so that he could return to Rome. (..) Thus as soon as it was possible, he boarded a felucca, and, suffering the bitterest pain, he started out for Rome. Through the intercession of Cardinal Ferdinando Gonzaga he had already obtained his liberation from the Pope. When he went ashore the Spanish guard arrested him by mistake taking him for another Cavalier, and held him prisoner. Although he was soon released, the felucca which was carrying him and his possessions was no longer to be found. Thus in the state of anxiety and desperation he ran along the beach in the full heat of the summer sun, and when he reached Porto Ercole he collapsed and was seized by a malignant fever. He died within a few days at about forty years of age in 1610. Thus Caravaggio finished his life and was buried on a deserted shore. Just when his return was awaited in Rome, came the unexpected news of his death.
Giovanni Pietro Bellori: The Life of Caravaggio - 1672 - Translation by Alice Wohl 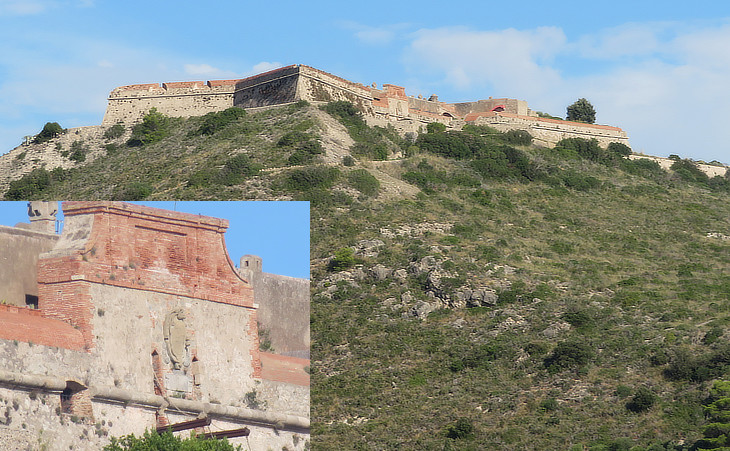 King Philip II ordered the construction of two other fortresses to protect the bay of Porto Ercole. The fortress named after him stood on a peninsula facing the old town. It was designed in order to cope with the development of modern artillery (you may wish to see Palamidi, an imposing Venetian fortress at the top of a mountain near Nauplia in Greece). During the XIXth century its military use was discontinued and today it is an exclusive private property. 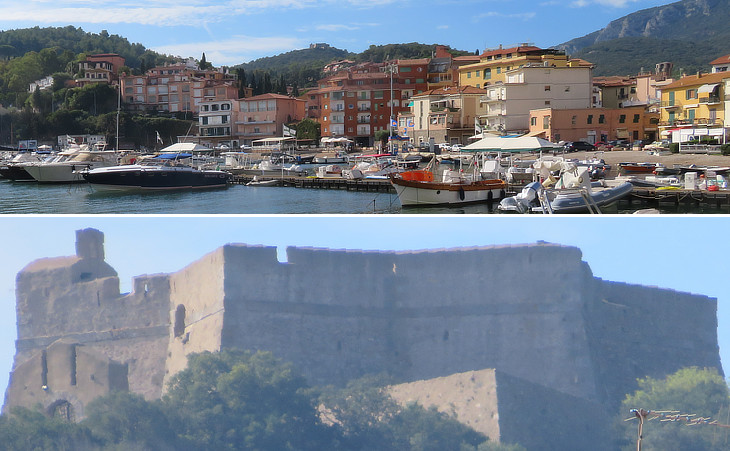 Star fort is the English term for the Italian fortifications of the XVIth century, because the overall outline of walls and bastions resembles a star (see Palmanova, the finest example of Italian military architecture). The construction of Forte Stella began at the same time as that of Forte Filippo, but its completion took a very long time. 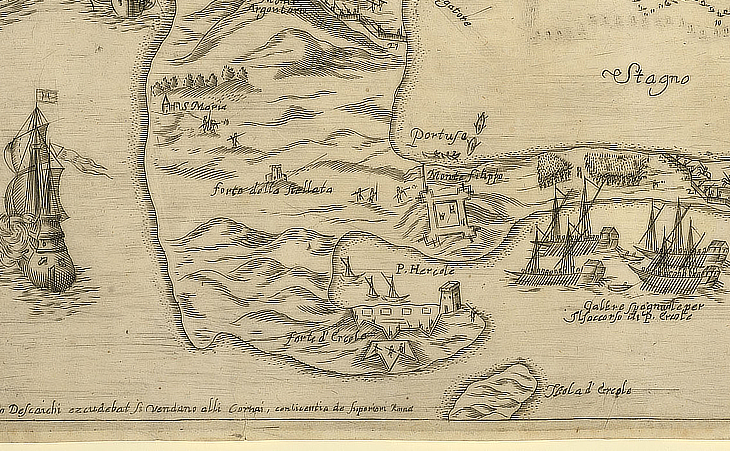 Detail of an engraving by Gottfredus de Scaichi depicting Porto Ercole during the 1646 Battle of Orbetello; it shows that Forte Stella (Forte della Stellata) was far from being completed

The fortifications of Porto Ercole were meant to protect the town from corsair raids, but the test of their effectiveness occurred in 1646 during a naval engagement between a French fleet led by Admiral Armand de Maillé, Marquis of Brézé, and a Spanish fleet commanded by Miguel de Noronha, 4th Count of Linhares. The latter was sent to break the blockade of Orbetello and relieve the town, which was besieged by a French army. The outcome of the battle was inconclusive, but Admiral de Maillé was killed during the fight and Admiral de Noronha was removed from office by King Philip IV for not having destroyed the French fleet. 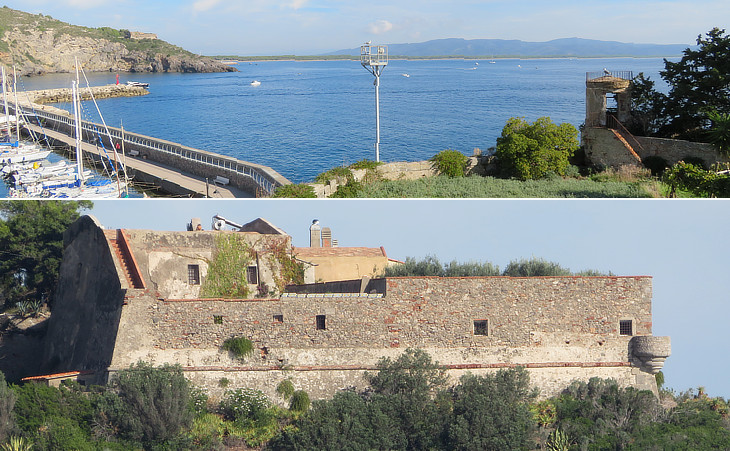 Batteria S. Caterina seen from Piazza S. Barbara (above) and in an enlargement (below)

The war of which the Battle of Orbetello was an episode ended in 1659, but a new war between France and Spain broke out in 1688. The fortifications of Porto Ercole were strengthened and in particular a small fort was built near the shore at the end of the peninsula of Forte Filippo. This type of coastal gun batteries can be seen also in Ottoman fortifications, e.g. at Leros in Greece. 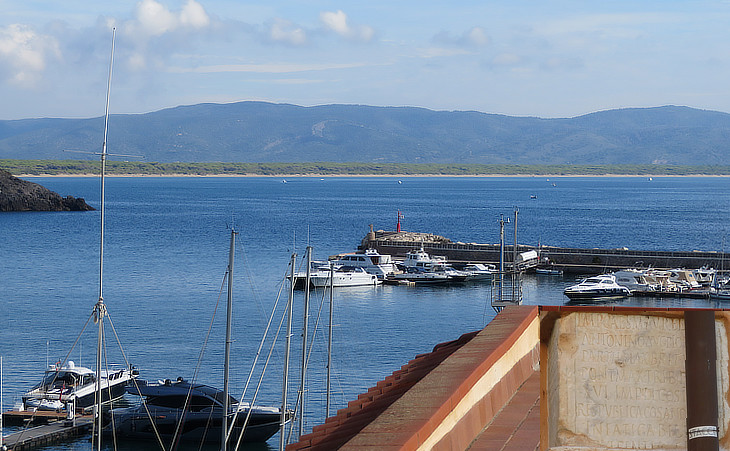 At the point where the Feniglia, the southern sand-bank extending from Monte Argentaro, joins the mainland, stand the ruins of Ansedonia, the ancient Cosa. Hare
Thursday, May 14 1789. At break of day we sailed from Porto Ercole, and after a passage of four miles, landed at a tower under Ansedonia. Amidst the rocks on the coast are the ruins of some antique baths in which fragments of mosaic have been discovered. These baths were excavated in the solid rock. On the summit of the hill are the remains of an Etruscan city, once splendid, but now totally deserted, and overgrown with wood. The circuit of the walls can still be traced, as well as the gates, which appear to have been four in number. One of them, except the arch itself, is very perfect. (..) Strabo, Rutilius Numatianus, Cluverius, &c. place the city of Cossae in this neighbourhood; and from the description and situation of Ansedonia, Cluverius judges them to be the same. (..) The itinerary of Rutilius Namatianus, describing his voyage on this coast, is so explicit, as to leave no doubt of the identity of Ansedonia and Cossae. Colt Hoare
Thereafter we sight the scattered housetops of Graviscae, (the port of Tarquinia or Montalto) plagued often with a marshy smell in summer-time; and yet the wooded neighbourhood is green with close-grown groves, and pine-tree shadows wave o'er the margin of the sea. Then we descry, all unguarded now, desolate Cosa's ancient ruins and unsightly walls. 'Tis with a qualm that I adduce mid serious things the comic reason for its downfall; but I am loath to suppress a laugh. The story runs that once upon a time the townsfolk were forced to migrate and left their homes behind because rats infested them! I'd sooner believe in losses suffered by the Pygmies' infantry and in cranes leagued solemnly to fight their wars. Not far from here we make the port which the name of Hercules distinguishes: a softer breeze follows a declining day.
Rutilius Namatianus - De Reditu Suo (A Voyage Home to Gaul in 416 AD) - Loeb edition - 1934
Cosa was thought to have an Etruscan origin until archaeologists came to the conclusion that its ruins were entirely Roman. Namatianus' account indicates it was already abandoned in the early Vth century; today the dune of Feniglia is a protected area because of its ecological importance and natural beauty.