in Rome
(signpost of Ristorante Ranieri)

(Foreigner stop a moment and look on your left towards this tomb: it contains the bones of a good and gentle man, a friend of the poor. Please passer-by, do not spoil this tomb, C(aius) Attilius Evodus, a libertus of Serrano and a Via Sacra pearl trader, rests here. Farewell passer-by.)

Via Appia Antica near Torre in Selci: inscription celebrating "Attilius Evodus, Margaritarius de Sacra Via" a pearl trader having his shop in Via Sacra (or perhaps at nearby Vicus Tuscus)

Our Christian epitaphs that are to be seen only in churches, or churchyards, begin often with a Siste Viator probably in imitation of the old Roman inscriptions, that generally addressed themselves to the travellers; as it was impossible for them to enter the city, or to go out of it, without passing through one of these melancholy roads, which, for a great length, was nothing else but a street of funeral monuments.
Joseph Addison - Remarks on several parts of Italy, in the years 1701, 1702, 1703
The jewellery store where Attilius Evodus sold pearls to his wealthy customers, maybe some senators on their way to the Curia, is no longer in business. The fact that a libertus, a former slave, was able to open a shop in the most important street of Ancient Rome and to be buried in a monument along Via Appia, shows that the Roman society was not rigidly divided into classes and that a shopkeeper could achieve a remarkable status (see also the monument to the baker Marcus Virgilius Eurysaces).

Historians estimate that the population of Ancient Rome was in the region of 1,000,000 inhabitants. The administration of such a large city required a complex activity, which ranged from the import and storage of commodities to fire brigades, from town planning institutions to the maintenance of aqueducts and sewers.
Shopping centres and malls were built next to the fora and the baths where the wealthiest Romans spent most of the day.

Unfortunately today's Rome does not have any shopkeeper in a position to proudly state "Purveyor of the Imperial House since 30 BC". As a matter of fact most of the shops belonging to the association Negozi Storici di Eccellenza di Roma can only claim to have been in business since the late XIXth century. The following section of this page shows some shops (not necessarily members of the previously mentioned association), which have maintained, at least in part, their old appearance and traditional service. You may wish to see also Trade in the XVIIIth century etchings by Giuseppe Vasi. 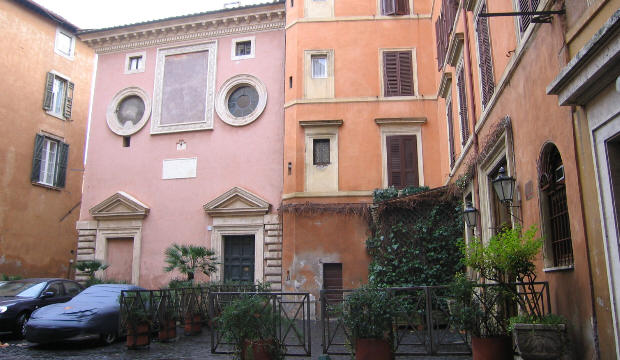 The oldest running businesses are inns (Albergo del Sole) or coffee-houses (Caffè Greco). In the late XIXth century Baedeker guides, today's rather expensive Ristorante Piperno was recommended (and still is) for its fried artichokes: at that time it was called Osteria Pacifico Piperno. It is located in one of the smallest (and most difficult to find) squares of Rome: the church shown in the picture above was the private chapel of the Cenci family. Ristorante Ranieri, in the former Strangers' Quarter near Piazza di Spagna, another restaurant recommended by the old guides, has retained its old signpost (and in general its XIXth century atmosphere).

The modest entrance of Ditta Leone Limentani (embellished in the picture above by a cipollino column of Portico di Ottavia) leads to a large basement depot where, in a maze of shelves, Romans go to find a replacement of that dish or that glass that a maladroit guest broke at their last party. 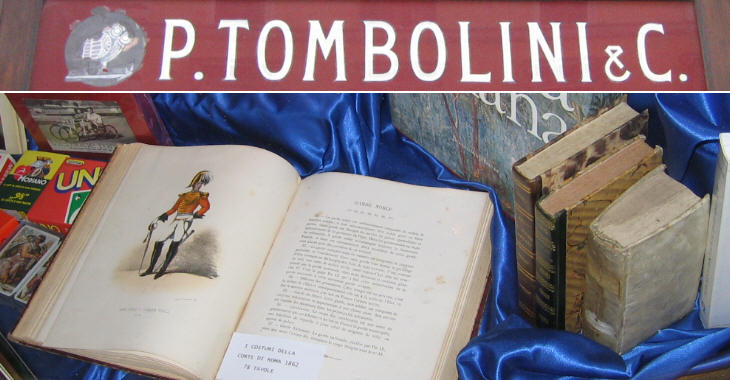 Tombolini's bookshop in Via IV Novembre, near Torre Colonna

A small bookshop in a large modern city has to face the competition of large stores selling books together with all sorts of media and of E-books. The only way an expert bookseller can manage to stay in business is to focus on specific topics where his advice is regarded as an added value.

In recent years young Americans visiting Rome as part of their European graduation tour are approached at Colosseo by other Americans living in Rome and they are offered a rather bizarre tour of Rome by night: those who enrol will not visit the monuments of Rome in the moonlight, but pubs, poor copies of the English ones. Antica Birreria Peroni has a more Roman appearance: it is mainly a place where one goes for a quick Italian lunch and it is decorated with angels holding inscriptions claiming the benefits of beer. 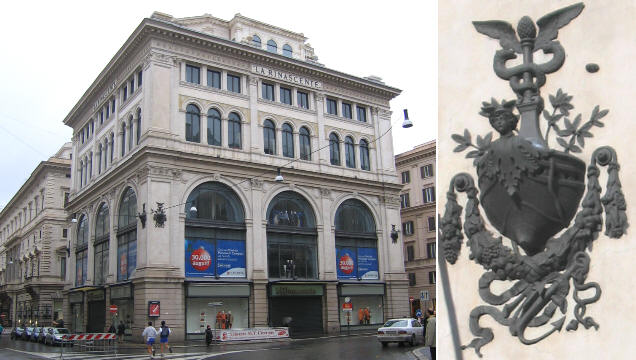 In 1887 Rome (within the walls) had its first department store: it was a branch of a large firm of Milan: it was built using a modern technique based on a structure of iron bars which enabled the opening of large shop windows. In 1920 the department store chain was given a new name: "La Rinascente", almost a synonym of "il Rinascimento", the Italian word for the Renaissance.
The small size of the building is not comparable with the XIXth century department stores of other European cities. It was eventually sold to another store chain.

Traditional windows at Schostal's in Via del Corso near Palazzo Ruspoli

In recent years many family run shops in Via del Corso have gone out of business due to the increasing burden of rents. They have been replaced by branches of large companies which consider their shop in Via del Corso as an advertisement promoting sales in all the shops of their chain and are therefore prepared to pay high rents for them.
Schostal, alla città di Vienna was one of the few family run shops which managed to survive until 2010. A branch of an Austrian firm, it lost the reference to Vienna during World War I, but it did not lose the tradition of orderly displaying its goods and giving clear notice of their price and quality, as you can see also in the image used as background for this page.