Foligno - An Excursion to Montefalco
(detail of the Cathedral of Foligno)

From Foligno we may visit the lofty Montefalco, one of the best places for the study of Umbrian painting.
Karl Baedeker - Italy: handbook for travellers - 1883
Montefalco is known as Ringhiera dell'Umbria (Umbria's balustrade/balcony) owing to its commanding position at the top of a hill.

The town is still surrounded by walls built in the XIIIth century to protect two monasteries located outside an earlier enclosure. Montefalco was then a possession of the Bishop of Spoleto. In 1383 it was given to the Trinci, the lords of Foligno.

In S. Agostino are a Madonna, St. James, and St. John of the Umbrian School and God the Father, Madonna, Apostles, and Saints by Benozzo Gozzoli. Baedeker
S. Agostino is a large church similar to those of Foligno and it is decorated by many XVth century frescoes.

Tutte le strade portano a Roma (all roads lead to Rome): this saying also applies to the main square of Montefalco which is located at the very top of the hill. It is a nice place to sit while tasting the local wines at one of the many enoteca (literally wine libraries). Some of the buildings show Renaissance features.

The church of S. Francesco, built in the 14th cent., with a portal of 1515, contains numerous interesting paintings. Baedeker
Benozzo Gozzoli who is best known for his elegant and very coloured frescoes at Palazzo Medici in Florence (it opens in another window) spent two years (1450-1452) in Montefalco, where he decorated the church and the monastery of S. Francesco. The two buildings are now a museum which also displays paintings coming from other churches of the region. S. Maria di Piazza, the small oratory in the main square, has a nicely decorated altar.

S. Illuminata is a small Renaissance church, with a design which is unusual in Umbria, most likely because the monastic community who built it came from northern Italy. 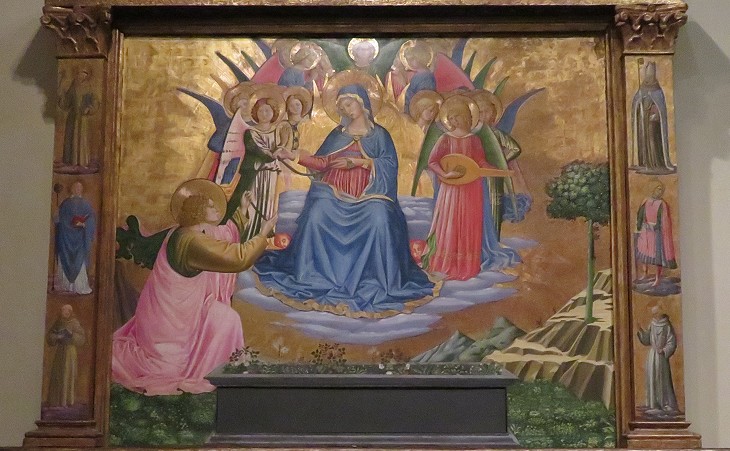 The church of S. Fortunato, 1 M. beyond the Porta di Spoleto, also possesses several interesting paintings. Baedeker
In 1848 a fine painting by Benozzo Gozzoli in S. Fortunato was donated to Pope Pius IX who had granted the status of Città to Montefalco.

A walk round the walls of the town affords magnificent views of the Umbrian plain. Baedeker.

Return to Foligno or move ahead to Spello.