Links to this page can be found in Book 7, Day 8, View C2 and Rione Borgo. 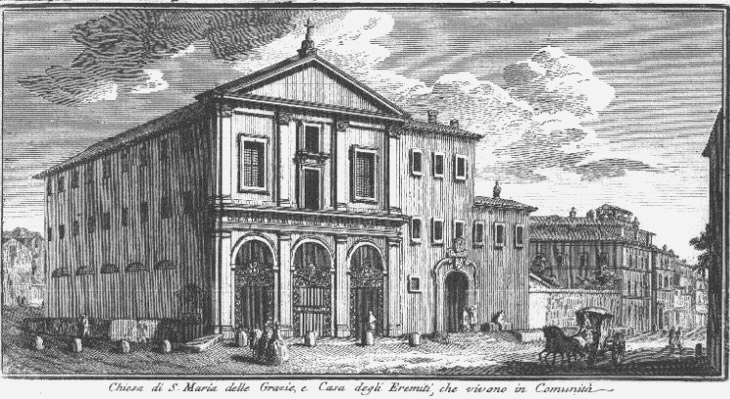 Pilgrims who reached Rome along Via Cassia and Via Flaminia usually crossed the River Tiber at Ponte Milvio and entered the city at Porta del Popolo; the most pious ones and those who could not afford staying in the inns near that gate, could directly reach S. Pietro via Strada Angelica, a road opened in 1563 by Pope Pius IV between the said bridge and Porta Angelica in the walls surrounding the Vatican. In the late XVIth century a small church and a hostel for poor pilgrims were built at Borgo Pio, near Porta Angelica at the initiative of a pious man from Calabria, a region of southern Italy. He collected contributions for the construction of the buildings by saying Facemo bene adesso che havemo tempo (Let's do good deeds now that we have time); you can see his motto in the image used as background for this page.
In the early XVIIth century the church and the adjoining building were entirely rebuilt at the initiative of Cardinal Marcello Lante. In 1756 when Giuseppe Vasi published this etching some hermits were in charge of the church. 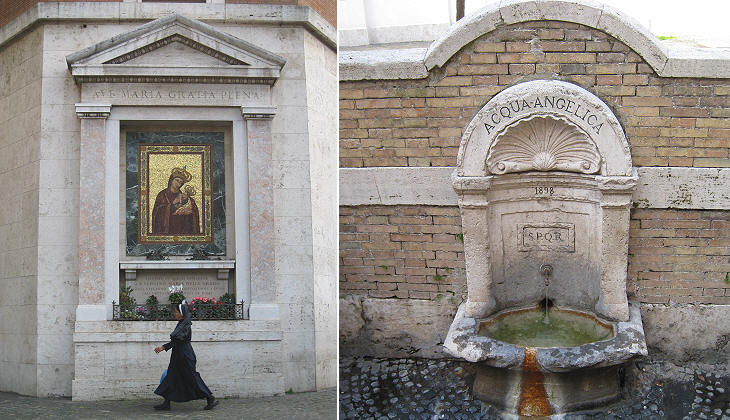 (left) Sacred image on the former location of the church; (right) fountain which was located on the side of the church and which has been moved to a nearby street

This small church, which belongs to Friars of the Order of Penance, is situate in the Borgo, a little at this side of the porta Angelica, and was built, in 1588, by A. Rossi of Calabria, Founder of the Order, and rebuilt, in 1618, by Card. Lante. It takes its name delle Grazie from a Madonna brought by the Founder from the Holy Land , and now over the great altar. The church is preceded by a pretty portico and its interior consists of a nave and two aisles, divided by pillars and arcades. The Jesus of Nazareth, over the altar to the right, is by some modern hand.
Rev. Jeremiah Donovan - Rome, Ancient and Modern: and its environs - 1844
S. Maria delle Grazie was the last historical church of Rome to be demolished. This occurred in 1939 when the walls surrounding the Vatican were in part redesigned to mark the border between Italy and the Vatican City State; the street along the new walls was enlarged and this led to demolishing S. Maria delle Grazie. A mosaic and an inscription on a modern building indicate its approximate location.

S. Giovanni Battista degli Spinelli (or a Porta Angelica) was a small church for the farmers of the vineyards outside Porta Angelica; Giuseppe Vasi shows it in his 1765 view and mentions it in his 1761 guide to Rome; it was pulled down when the area was developed in the late XIXth century to make room for Rione Prati. 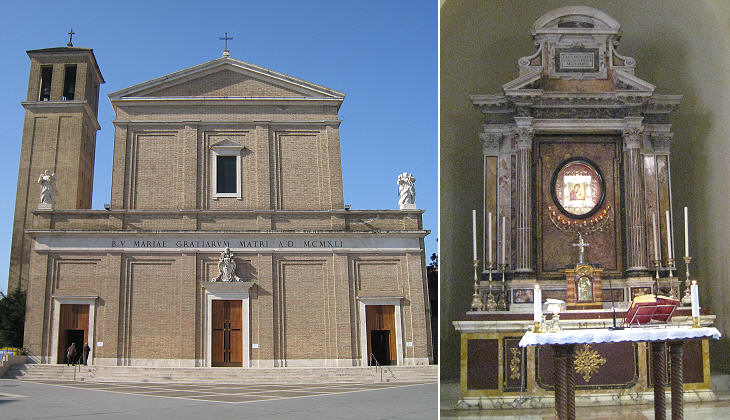 In 1941 a new church by the same name was designed by Tullio Rossi not far from today's entrance to Musei Vaticani. The main altar of the old church was reassembled at the end of the left nave of new S. Maria delle Grazie.