Links to this page can be found in Book 10, Day 6 and Rione Trastevere. 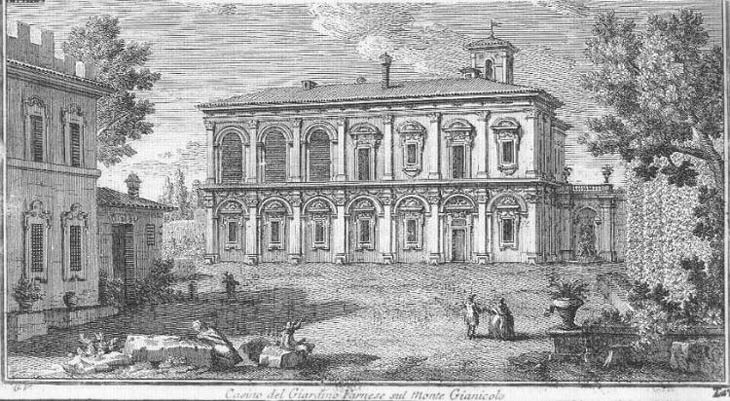 This is the fourth etching Giuseppe Vasi dedicated to Farnese properties in Rome after Palazzo Farnese, La Farnesina and Orti Farnesiani; probably this attention to the Farnese was due to the fact that he was allowed to live and work in their palace by Charles VII, King of Naples who had inherited all their properties; the new Neapolitan owners however were not much interested in the small casino shown in this 1761 plate and in 1775 they sold it to the Giraud, who had other nearby estates, i.e. Casino Giraud and Villa del Vascello.
The view is taken from the green dot in the 1748 map here below which shows: 1) Casino del Giardino Farnese; 2) Casino Riario; 3) Villa Lanti. 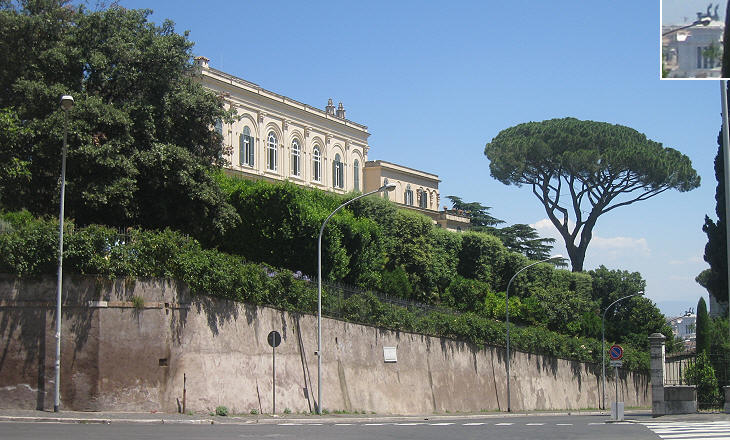 The view from Porta S. Pancrazio in June 2010 (the inset shows Monumento a Re Vittorio Emanuele II)

The casino was located very near Porta S. Pancrazio and because of its commanding view in all directions, including that beyond the walls towards Villa Corsini and Villa Doria Pamphilj, it was chosen by Giuseppe Garibaldi as his headquarters during the 1849 Defence of Rome; at that time the casino was known as Villa Savorelli; French guns reduced it to a pile of rubble; in 1856 it was rebuilt with some minor changes. 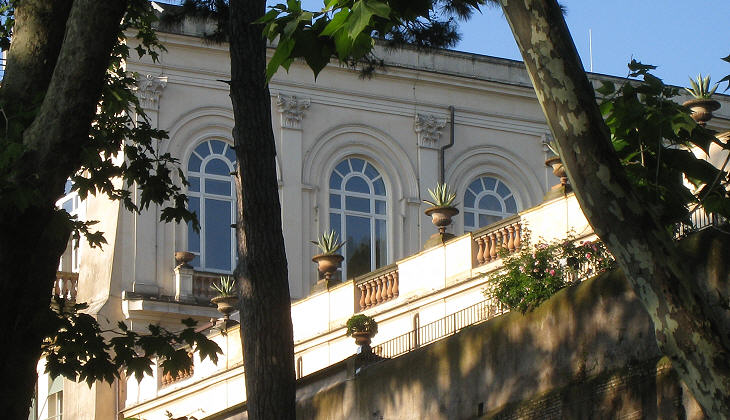 The casino was built by Cardinal Girolamo Farnese in ca 1650; he was a member of the Castro branch of the family; the architect of the casino is not known; the property included an older building which belonged to Pope Paul III Farnese. In 1885 the casino was bought by Clara Jessup Heyland from Philadelphia who changed the name of the villa into Villa Aurelia (a reference to the nearby ancient Roman road) and who bequeathed it in 1909 to the American Academy of Rome, to which it still belongs. 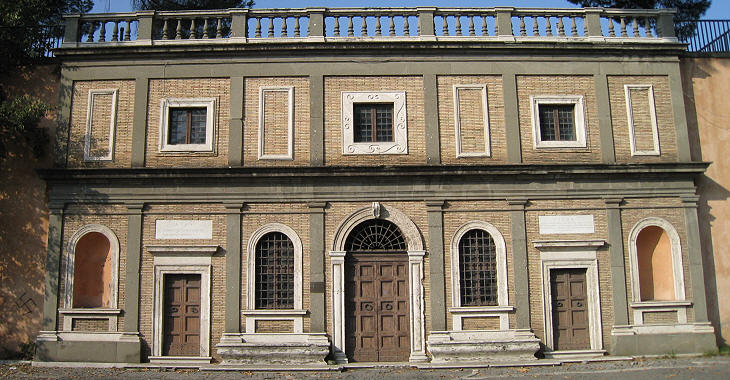 The large avenue which today links Porta S. Pancrazio with Piazzale del Gianicolo and Monumento a Giuseppe Garibaldi is embellished by the façade of a Renaissance building (it is just a façade which hides a water reservoir); it once belonged to a demolished house near Piazza del Campidoglio where it is said that Michelangelo lived for a few years (that where he spent thirty years and died was located near S. Maria di Loreto in the same area); the great artist chose to live far apart from the papal court to have greater privacy.
The façade is an 1874 reconstruction by Domenico Jannetti in Via delle Tre Pile, a street leading to Piazza del Campidoglio; in 1941 the need to enlarge this street led to relocating the façade to its current location. It stands opposite Monumento a Ciceruacchio. 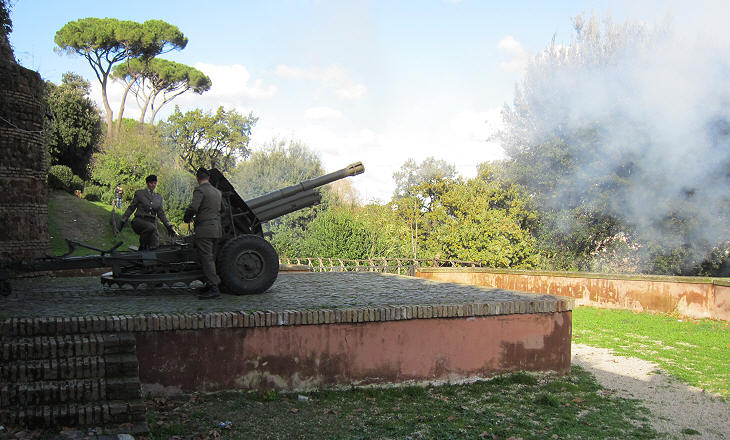 In a view of Book 5 Vasi showed three casinos which enjoyed a commanding view over Rome: in addition to Casino Farnese he showed Casino Riario and Villa Lanti; Casino Riario was part of Giardino Corsini and it was the site chosen by Vasi for drawing his 1765 Grand View of Rome; it was pulled down at the end of the XIXth century to make room for Piazzale del Gianicolo. 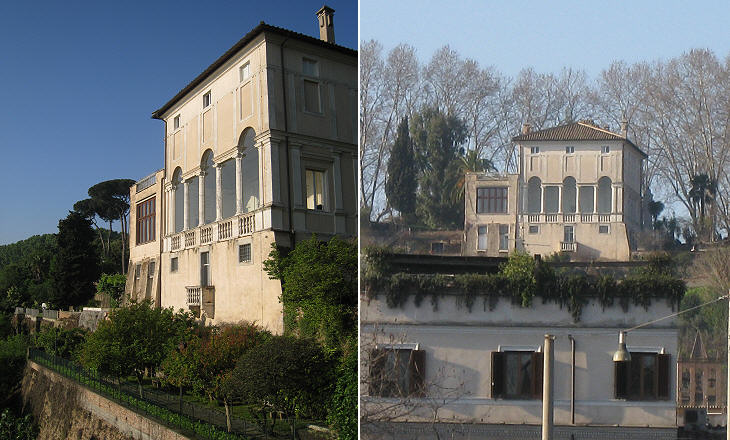 The lane on the right, inside the gate (Porta S. Pancrazio), leads to the Villa Lante.
Augustus J. C. Hare - Walks in Rome - 1875
In 1884 Passeggiata del Gianicolo. a large avenue on the top of the hill from Acqua Paola to S. Onofrio replaced the lane mentioned by Hare. In the redesign of the area Villa Lanti (or Lante) lost its gardens, but the casino is still there with its elegant loggia. 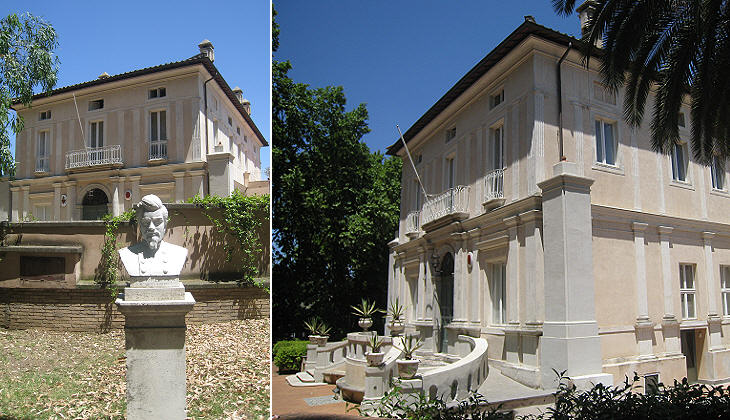 (left) Bust of Herman Liikanen from Finland who joined Garibaldi's 1860 expedition in southern Italy; (right) façade of the casino

The casino was built in 1519-1531 for Baldassare Turini, a member of the papal court who was a close adviser to Popes Leo X and Clement VII who both belonged to the Medici family; according to Vasari the building was designed by Giulio Romano who painted some of its halls; similar to Villa Medici, the casino was built on high ground so that it could enjoy a fine view.
In 1551 the estate was acquired by the Lanti (or Lante) who had a palace in town and a villa at Bagnaia. They sold it in 1817; after various passages of property it was eventually bought by Finland; today it houses The Finnish Institute in Rome. 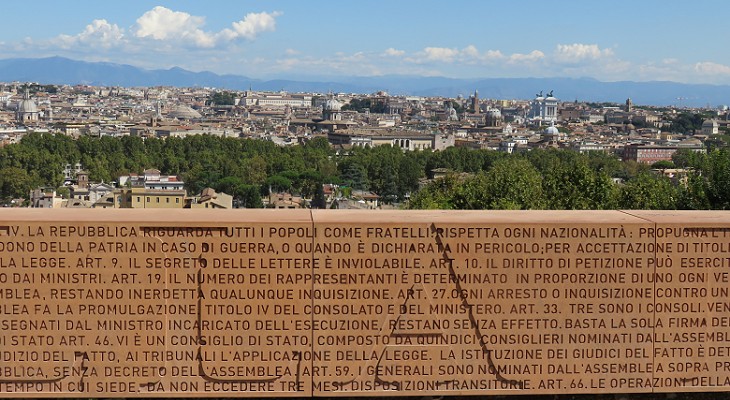 View of Rome from a terrace adjoining the villa (you may wish to see a 2008 Grand View of Rome from Villa Lanti). The wall is decorated with the text of the Constitution of the Roman Republic which was approved on July 3, 1849, the day the Republic surrendered to the French 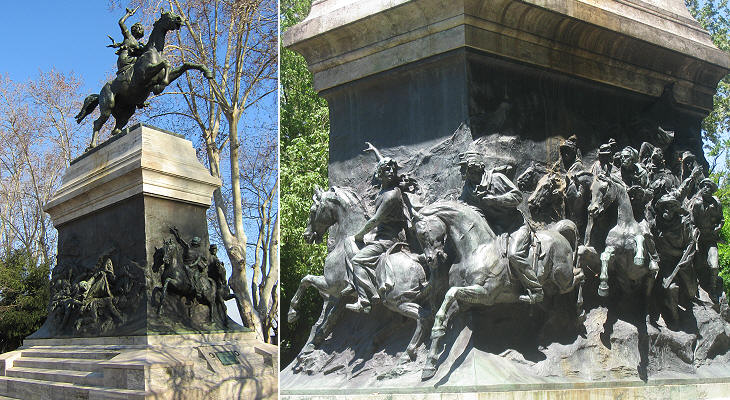 (left) Monument by Mario Rutelli (the image used as background for this page shows a detail of the statue of Anita); (right) detail of the relief

A small square along Passeggiata del Gianicolo houses the Monument to Ana (Anita) Maria Ribeiro da Silva, the Brazilian first wife of Giuseppe Garibaldi. It was erected in 1932 and it is one of the last works by Mario Rutelli, a sculptor who is best known for the statues of Fontana delle Naiadi.
After the fall of Rome Anita joined her husband who was attempting to reach Venice; she died of fever in the lagoon of Comacchio near Pomposa; the following is an excerpt from G. M. Trevelyan's Garibaldi's Defence of Rome:
"With infinite difficulty and danger they (Garibaldi and his friend Bonnet) proceeded to carry the agonising woman across two miles to Cavallina farm, where they arrived well after midday; (..) here Anita was laid on a bed and given such nourishment as she could take. (..) Garibaldi took Anita in a cart towards the Zanetto farm on the borders of the great lagoon, where, at Bonnet's request, every comfort was being prepared. (..) Anita growing hourly worse, and no longer well able to understand what was going on around her, was in agony at the idea of being separated from Garibaldi. Bonnet - he said at last - you cannot imagine all that this woman has done for me, nor how tenderly she loves me. I owe her an immense debt of gratitude and love. Let her come with me. (..) Anita in her last hours still held by the not dogmatic religion of her husband; during her long death agony throughout the first four days of August, there were no sign of craving on her part for those miraculous consolations which she had rejected in her days of health and strength. Dying on the breast of Garibaldi, she needed no priest. (..) The last words that Garibaldi had heard Anita say to him concerned the children whom she left to his care (she was carrying their fifth child when she died). Then for long hours her speech had failed. All day she was losing her hold on life, and Garibaldi could but clasp her closer in his arms, as their boat glided over the smooth surface of the lagoon. No longer conscious of anything save that he was there, the dying woman may have fancied that they were escaping once more over the well-known waters of another lagoon now all too far away; or that they were riding together to war in the first glory of youth and love, over rolling, infinite spaces." 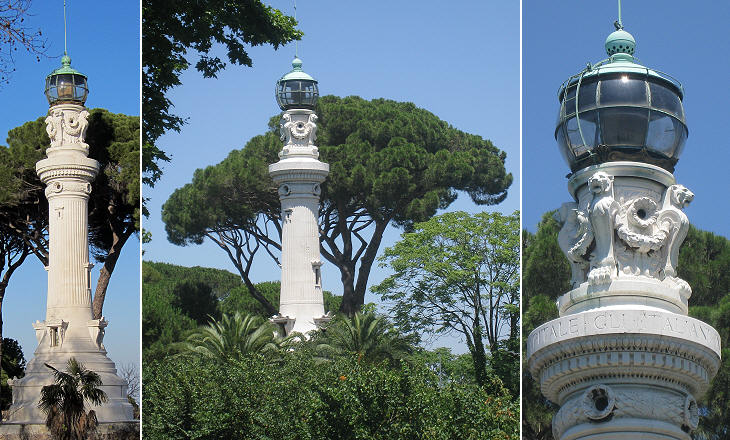 In the second half of the XIXth century millions of Italians migrated in search of a better life; Argentina received a very large number of Italian migrants; they formed a community which maintained strong ties with Italy; in 1911 in conjunction with the celebrations for the fiftieth anniversary of Italian Unity, that community commissioned Manfredo Manfredi to design a lighthouse which alternates green, white and red lights, the colours of the Italian flag; the imposing monument is very much in the style of Monumento a Re Vittorio Emanuele II, also because it was decorated with the same botticino stone. 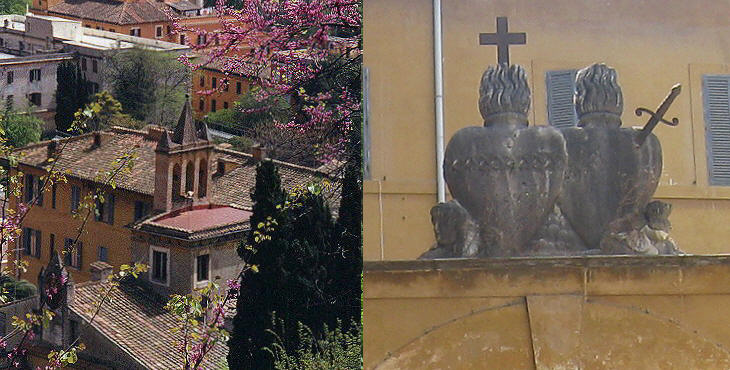 By looking down from Villa Lanti towards the River Tiber one can see a small bell tower. It belongs to the church of Sacro Cuore di Gesù which is inside a nunnery founded in 1837 by St. Madeleine Sophie Barat, founder of the Society of the Sacred Heart. The gate of the nunnery shows the symbols of the order.

Next plate in Book 10: Casino e Villa Corsini fuori di Porta S. Pancrazio.
You have completed Day 6 itinerary and your tour of Rione Trastevere!
Move to Day 7 or to Rione Borgo.