Spedale di S. Gallicano
(Vasi at work in the Grand View of Rome)

Links to this page can be found in Book 9, Day 6, View D10 and Rione Trastevere. 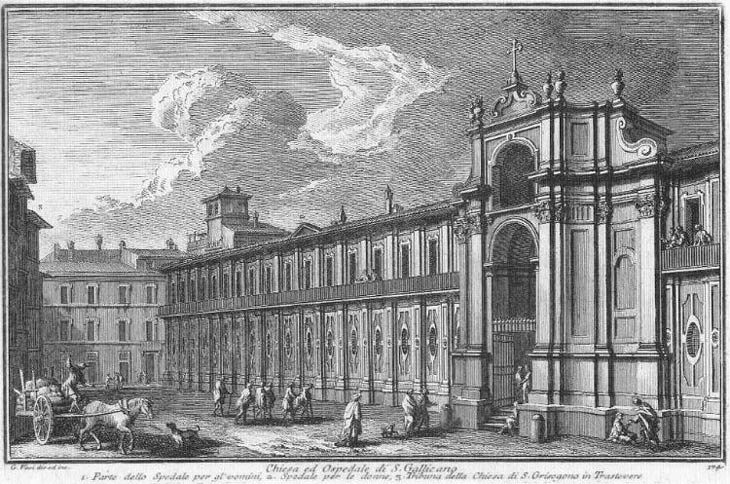 This 1759 etching by Giuseppe Vasi shows what at the time was a very modern hospital which was built in 1729 for the cure of cutaneous infections; a continuous balcony along the two long wards allowed the opening and closing of the windows without disturbing the patients; the main altar of the central chapel was visible from the wards, so that the sick could attend ceremonies without leaving their beds; unfortunately, from an architectural viewpoint, the long front of the hospital was located in a very narrow street, a fact which Vasi ignored in his view.
The view is taken from the green dot in the 1748 map below. In the description below the plate Vasi made reference to: 1) Male ward of the hospital; 2) Female ward of the hospital; 3) rear side of S. Grisogono, the front of this church is shown in another plate by Vasi. 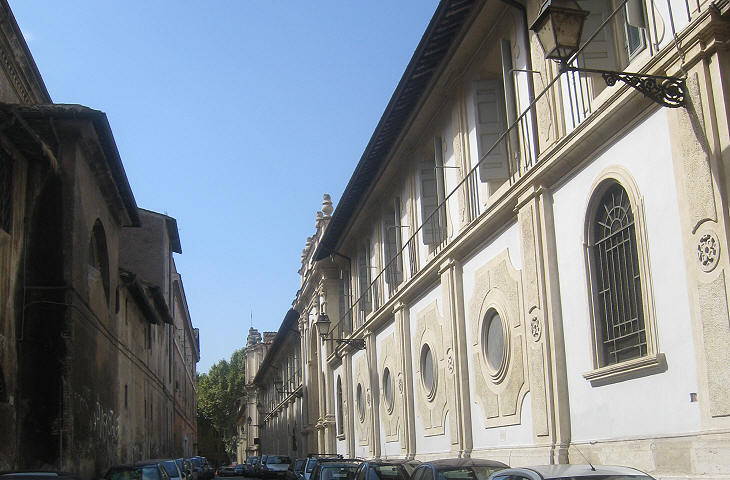 A very recent restoration brought back the light colours which were in use in the XVIIIth century; the image above shows on the right also a second entrance to the male ward which was opened in 1925. The image used as background for this page shows an architectural detail of the long façade.
Today the building houses a day hospital caring for the homeless and immigrants without a work permit. Its current use is in line with a 1725 Latin inscription on one of its entrances. It says the hospital cared for neglectis rejectisque ab omnibus (those abandoned and refused by everyone). (left) Façade of the chapel; (right) details of its stucco decoration

Scabies and tinea capitis, a kind of ringworm, were very common diseases among the lowest classes; at the beginning of the XVIIIth century their causes were identified and in 1722, Don Emilio Lami, a priest and doctor at S. Galla, opened a small hospital near S. Benedetto in Piscinula which was specifically dedicated to curing these diseases. The activity of this hospital was supported by Cardinal Pier Marcellino Corradini who in 1723 convinced the newly elected Pope Benedict XIII to build a larger hospital.
The design of the new building was commissioned to Filippo Raguzzini, the Pope's preferred architect, who knew him while he was Archbishop of Benevento, a small papal enclave in the Kingdom of Naples. Raguzzini was looked down on by the Roman architects and after the death of the Pope in 1730, his activity is recorded only for the small church of Madonna del Divino Amore. Today some of its works, e.g. the houses opposite S. Ignazio and S. Maria del Rosario are positively assessed by art historians.

(left) Corridor of the ward; (right) ancient column and XVIIIth century baths in one of the courtyards

In order to finance the construction of the hospital the Pope made use in part of an amount bequeathed by Giovanni Maria Lancisi, the physician of Pope Clement XI, for the construction of a new ward at Spedale di S. Spirito in Sassia.
The hospital was dedicated to St. Gallicanus, a Roman general at the time of Emperor Constantine, who became a Christian and founded a hospital in Ostia. 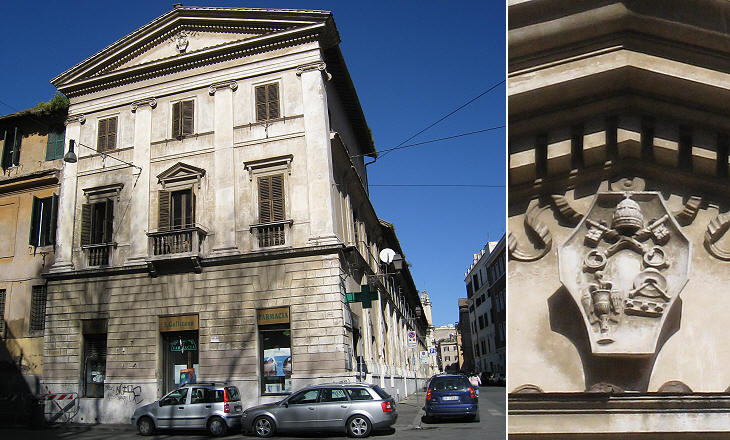 The interior contains two long halls opening into one another, the first containing 120 beds for men, the second 88 for women. Patients affected with maladies of the skin are received here to the number of 100. The principal treatment is by means of baths. (..) The establishment is at present under the management of the Benfratelli.
Augustus J.C. Hare - Walks in Rome - 1874
In the 1820s the facilities of the hospital were enlarged with the addition of an anatomical theatre. 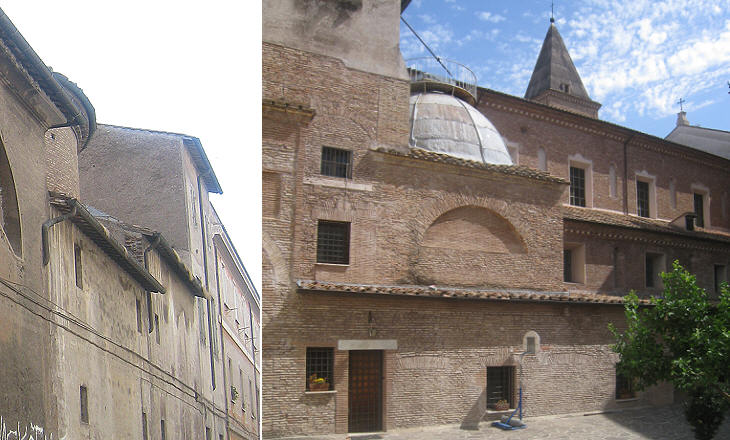 (left) Apse of S. Grisogono; (right) side view of the church

The medieval aspect of S. Grisogono was modified in the early XVIIth century; a door opposite S. Gallicano leads to a spacious courtyard which allows a good view of the southern wall of the church. It shows the various changes (opening and closing of doors and windows) which have occurred though the centuries. You may wish to see the early basilica beneath the current building.