The ruins of the ancient Lycian town of Simena (today's Kalekoy) have become very popular among the many holidaymakers who rent a yacht for a short cruise along the coast between Fethiye and Kemer.

To the eastward of Kastelorizo, parallel ranges of hills form the coast into long islands and peninsulas, with deep inlets of the sea between them. One of those spacious estuaries is called Kakava bay; it is separated from the sea by an island of the same name and from an inner harbour by a narrow neck of land which terminates in a steep rocky hill. This hill is covered with ruined walls. once intended for fortifications; and on its summit are the remains of a castle commanding both the harbours, and every approach by sea or land.
Francis Beaufort, Captain of HMS Frederikssteen, a frigate of 32 guns: Karamania; or a brief description of the South Coast of Asia Minor, and of the Remains of Antiquity collected during a survey of that coast, under the orders of the Lords Commissioners of the Admiralty, in the years 1811 & 1812 - Published in 1817

(left) Fortress; (right) theatre, also in the image used as background for this page

At the foot of the hill there is a small pier and quay; and the foundations of dwelling houses, reservoirs, and stairs hewn out of the rock, shew that it was once a place of some consequence. Beaufort
The acropolis of ancient Simena was turned into a fortress by the Byzantines when the coasts of Lycia were subject to Arab raids. Later on the site became (most likely) an outpost of the Knights of Rhodes, whose possessions included the nearby island of Kastelorizo (Castelrosso). The ancient acropolis had a very small theatre cut into the rock.

View of the yacht mooring point from the fortress

A few small cannon are scattered about the walls, which from their appearance, would be destructive to those only who might fire them. Beaufort
Very little is left of the medieval fortress and most of the walls and in particular their battlements are the result of a modern restoration aimed at making the site more evocative.

View of the necropolis from the fortress

The name Kakava applies to the whole of this district, including several islands. (..) I had no sooner resumed my land travels than objects of interest appeared: around me were nameless ruins, extending over a mile of coast, and containing numerous cisterns or granaries, ruined buildings, and massy tombs. (..) On the wild crags of the rocky mountains to the north were many strong, heavy sarcophagi of the ancient inhabitants, which had nevertheless been pillaged; the number of tombs, compared with the size of the ruined towns, would appear quite unaccountable, were it not remembered that they are as imperishable in material as in construction, and that they record not a single generation of the living, but many successive generations of the dead.
Charles Fellows - Journal Written during an Excursion in Asia Minor in 1838
The ridge of a hill to the east of the fortress is the site of a vast necropolis with many free-standing "Gothic" Lycian sarcophagi.

It is remarkable that in some places, three or four of the lower steps, and even the foundations of walls, are now beneath the surface of the water. (..) These appearances have also been ascribed to earthquakes, and even to the subsidence of the land itself. Beaufort
A sarcophagus in the lower part of Simena has become the symbol of the town because it partly emerges from the water; bathers and canoeists enjoy being photographed next to it. Archaeologists have studied the boreholes made by marine molluscs on its surface in order to determine the bradyseism of the area (gradual uplift or descent of the Earth's surface due to seismic activity).

View of the strait between Simena and Kekova Island

Ephesos Museum in Vienna: (above) model of the Heroon of Trysa; (below) part of the double band of reliefs

Trysa was a small town in the mountainous region north of Simena which enjoyed some wealth in the IVth century BC, before almost disappearing. In 1841 reliefs from a large monument were found and copied by Julius August Schoenborn, a German teacher, but only in 1881 the site was properly investigated by Otto Benndorf, who at the time was Professor of Archaeology at the University of Vienna. He was allowed by the Ottoman authorities to ship the reliefs to Vienna. They appear to have decorated the wall surrounding a tomb dedicated to a local king or hero. The model at the Ephesos Museum shows the reliefs on the outside of the building, but it has been suggested they might have been placed in the inside, as if to be seen by the dead.

Ephesos Museum in Vienna: details of reliefs depicting a battle

The reliefs have been compared with those which decorate the Nereid Monument (actually a tomb) which was found at Xanthos. Those at Trysa are flatter and a local stone was used, rather than marble. There is evidence that the reliefs were painted. Not all the subjects they depict have been identified in history or mythology; they might have illustrated events which had only a local significance. 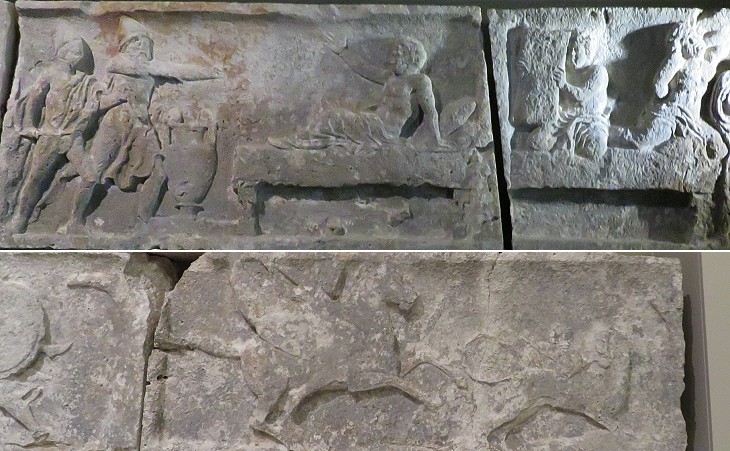 (above) Kunsthistorisches Museum in Vienna: Ulysses and Telemachus killing the suitors of Penelope: (below) Ephesos Museum in Vienna: Bellerophon killing Chimera, a fire-breathing monster, which terrorized the region; the event was often depicted in Roman mosaics, e.g. at Girona