- The Gates of Rhodes
(relief in the fortress of Bodrum)

The names of saints attached to the various gates, and their figures sculptured in relief above them; the Priories, which formed the headquarters of each nationality or Tongue, as they were called, while the affairs of the Order at large were discussed in their common place of meeting; the bastions, or portions of the wall which were permanently assigned to each nationality to defend; and the escutcheons over the dwellings or the gateways, denoting either the possessor or the person by whom they were erected, but all of them containing the cross of the Order; all these bear witness to the religious character of the institution, and to the principle according to which the independent position of each people was recognised.
Henry Fanshawe Tozer - The islands of the Aegean Sea. Publ. 1890, but Tozer began his travels in 1874.
Rhodes had few gates because of the town location at the northern tip of the island and because the rest of the island was scarcely populated. Three gates responded to actual needs: St. Catherine's Gate gave access to Emporium, the commercial harbour of the town; St. John's Gate was the terminal point of the road which linked Rhodes with Lindos and the villages on the eastern coast; d'Amboise's Gate was the access from the western coast.

May 18th. 1840. The password being called, we landed, and by the light of a full moon spread our carpet upon the quay, and enjoyed an English breakfast of tea and toast, long before the inhabitants of the town opened their gates. I was surprised to find that the city retains so much of the buildings and fortifications of the Knights of Rhodes. Probably the only change in the view of the town from the harbour, during the last centuries, is the elegant minarets of the Turkish mosques here and there peering above the walls.
Charles Fellows - An account of discoveries in Lycia - 1841
The list of gates is completed by three minor gates: St. Athanasius' Gate on the southern side of the walls was closed for centuries; Mills Gate provided a direct route to the mills located at the harbour; St. Paul's Gate gave access to Mandraki (It: Mandracchio), a small harbour, mainly used by the Knights' navy. 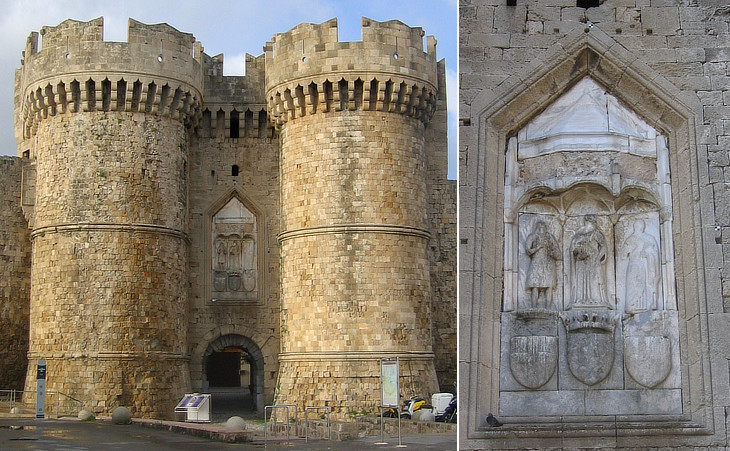 St. Catherine's Gate and the relief above its entrance

The city is entered by the finest of all the gates, that of St. Catharine, which is surmounted by a figure of that saint, standing between St. Peter and St. John the Baptist; it is flanked by two round towers, and has fine machicolations, and a place for the portcullis. Tozer
St. Catherine's Gate (or Sea Gate) was the main gate of the town. It was built in 1478 by Grand Master Pierre d'Aubusson as part of an effort to strengthen the fortifications of Rhodes against a much feared Ottoman attack: the attack actually occurred just two years later.
The gate however was unlikely to be the site of a possible assault by the Ottomans: the space between the walls and the harbour was too limited to allow the enemy to establish his camp there. This explains why the gate is more a work of art, a sort of grand entrance, than a defensive structure. The coats of arms below the relief showed the heraldic symbols of the King of France (centre), in addition to those of the Order (left) and of the Grand Master (right).

(left) D'Amboise's Gate and behind it the Palace of the Grand Masters; (right) detail of the relief

The Amboise gate received its name from the Grand Master, Emery d' Amboise, who erected it. (..) Re-entering the city by the Amboise gate, and passing through successive lines of fortification by winding ways, intended to protract the defence, we find ourselves in the upper part of the Castello, or city of the Knights, where stood the church of St. John and the palace of the Grand Masters. Tozer
The most impressive gate of Rhodes from a military viewpoint is no doubt that built by Grand Master Emery d'Amboise: it was completed in 1512: the access was protected by two massive round towers clearly designed to withstand the Ottoman cannon. If the enemy had managed to make his way through the gate still he would not have gained access to the town; this because d'Amboise modified the design of the walls so that there were three other gates between the external gate and the town. For this reason the Ottomans called the overall system of gates Egri Kapi (Crooked Gate) (see Egri Kapi in Constantinople).

The English reached from St. John's gate to the tower of St. Mary. The defences in this part are especially strong, the second or outer line, and the bastions, being of very solid construction. Outside the moat is an old Turkish cemetery, where lie the bones of those of the besiegers who fell during the siege. Traversing this, and skirting the moat, we pass St. Mary's tower, which is distinguished by a relief of the Virgin and Child built into the outside of the masonry. Tozer
The gate was closed in 1501 by Grand Master d'Aubusson and this explains why it does not show the same level of fortifications as those of D'Amboise's Gate. St Mary's Tower, the round tower which controlled the access to the gate, was built in 1441 by Grand Master Jean de Lastic. On Christmas' Day 1522, after the capitulation of the town on December 20, Sultan Suleyman made his entrance through this gate, which was opened for the occasion. He then closed the gate again and it has remained shut until 1922 when it was reopened for the 400th anniversary of the event and has remained open ever since.

Ascending gradually we reach the walls, and pass through them by the southernmost of the two gates on the land side, the gate of St. John, close to which a number of stone shot, such as were used in the siege, are ranged in a line against the wall. Tozer
The Outer St. John's Gate was built by Grand Master d'Aubusson to protect the previous fortifications built by Grand Masters Fluvian, Milly and Zacosta. In 1912 Italian troops made their entrance into Rhodes through this gate: the rectangular empty frame to the left of the gate housed an inscription celebrating the event.

We next pass through the gate of St. Paul, over which stands a figure of the saint, holding in one hand a sword, in the other the volume of the Gospel (in line with the traditional iconography); like all these figures and escutcheons, it is carved in low relief on a slab of bluish grey marble. This gate leads, not into the city itself, but into the circuit of walls which enclose the great harbour, or harbour of commerce. Tozer
The gate is surrounded by a low wall and is protected by a high tower where Grand Master d'Aubusson placed a relief portraying St. Paul: The Knights had their arsenal between this gate and that of St. Catherine's: it had a direct access to the harbour; today Arsenal Gate is a modern opening in the walls which allows cars to reach the modern town.

According to some sources Mills Gate was actually called St Catherine's Gate: the gate was the access to the Emporium from the Jewish quarter: it was not strongly fortified because the harbour was protected by other fortifications.
St. Anthony's Gate was the old western gate of Rhodes: with the redesign of the walls it became the last gate of d'Amboise's Gate.

The image used as background for this page shows St. Catherine's Gate seen from the town.