Page revised in January 2017. The locations covered in this section were visited in November 2007.

- Introduction and Day One
(relief in Banteay Srey)

In 1761 Giuseppe Vasi wrote a guide book for visiting Rome in 8 days; by the same token (although in a rushed way) these pages cover a short stay at the archaeological area of Angkor in Cambodia.
The ancient Greeks referred to Egypt as "the Gift of the Nile"; Cambodia can be regarded as "the Gift of the Mekong" because the periodic floods of this gigantic river greatly helped the development of the Khmer civilization. Most of the inhabitants of Cambodia refer to themselves as Khmers, a tribe who came to this part of Southeast Asia from India during the early centuries of the 1st millennium AD. In the 9th century the Khmers founded an empire which included today's Cambodia and parts of the neighbouring countries (Vietnam, Laos, Thailand). The empire reached its peak in the early XIIIth century with the construction of Angkor Thom, a large city surrounded by walls. Then the ongoing wars with aggressive neighbours (chiefly the Thai to the north and the Champa to the east) and a failure to maintain the irrigation system of the rice fields, led to the decline of the Khmer Empire: in the XVth century the capital was moved from Angkor to a more secure location in the south of the country. The timber buildings were burnt and the waterways were damaged so that the enemy would not attempt to revive Angkor: over time marshes and forests covered the area.

The western travellers (chiefly missionaries) who visited Angkor in the XVIth/XVIIth centuries could not believe that the gigantic ruins they saw were the work of the ancestors of the poor inhabitants they met in the region. Only in the XIXth century, when the French explored Cambodia to expand their possessions, Angkor was credited to the Khmer people. The French archaeological missions cleared the main buildings from the thick forest which had covered them and restored some of the ancient canals to reduce the marshes and improve health conditions. In parallel they looked for evidence of Angkor's historic past: accounts of Chinese and Portuguese travellers, a few inscriptions and the narrative reliefs which were found on the walls of many buildings, all contributed to a reliable reconstruction of Angkor's history.

Today the archaeological site of Angkor is the "golden mine" of Cambodia: it attracts a growing number of visitors and it has a very positive effect on the economy of the state, which is recovering from a nightmarish recent past; the modern town of Siem Reap near Angkor is the fastest growing location of the country; accommodation is mainly at the upper end of the scale with many five stars hotels and resorts. The ancient monuments have the added benefit of being placed in a well kept botanical garden. 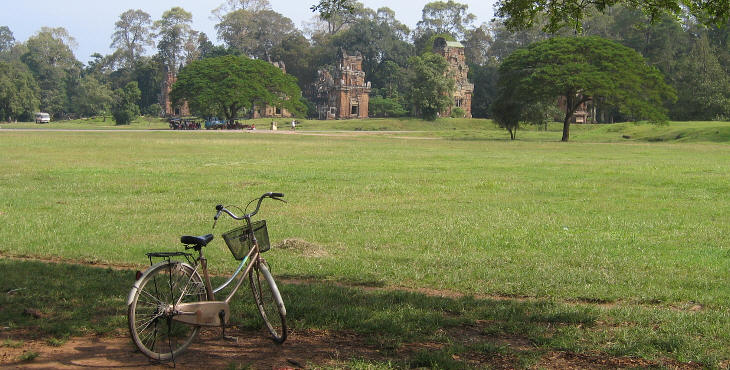 The esplanade opposite the terraces of Angkor Thom

Angkor Thom was the last capital built by the Khmer Empire in this part of the country: Angkor means city, Thom means great: Angkor Thom has the shape of a square: each side has the length of approximately two miles: the area includes buildings of previous periods. It was surrounded by thick walls and by a large moat: this defensive structure was due to the fact that the previous capital had been taken and sacked by the Champa in 1178. It was founded by King Jayavarman VII, the prince who led the Khmer reaction and forced the Champa out of the country (varman was a suffix added to the king's name in India and Cambodia). It was built between 1181 and 1216.

A gigantic Naga at the entrance

The imposing southern gate provides an introduction to the culture and beliefs of the Khmer. Two large Naga are the first wardens of the gate: Naga is an odd-headed Cobra snake; the varying number of heads (3-5-7-9) gives a different meaning to the Naga. It is also a symbol of the Khmer people, because, according to a legend, Prah Thon, the founder of the Cambodian nation, fell in love with a young woman who eventually told him she was the daughter of Bhujang Nagaraja, king of the snakes and lord of the seas. Prah Thon agreed to meet his beloved's father to obtain approval to their marriage. Bhujang Nagaraja had nine heads and was followed by other snakes with three, five and seven heads. As a wedding gift he and his fellows drank all the water covering Cambodia and Prah Thon and his wife settled in the new country and gave origin to the Khmer people.

The deva (angels) and the asura (demons)

The Khmer culture was based upon Hinduism and deva (angels) and asura (demons) were placed behind the Naga as additional wardens of Angkor Thom. It must be noted that the negative aspect of the asura evolved over time and that most likely in the XIIIth century they were regarded as presiding over moral and social matters, with the deva looking after natural elements.
The moat surrounding the city was not crossed by bridges, but it was interrupted by a sandstone carriageway in conjunction with the gates.

King Jayavarman VII was the second king of Cambodia to have embraced Buddhism and he celebrated the faith he was trying to pass on his people, by having faces of Avalokitesvara placed on the sides of the gate towers. Avalokitesvara (the Lord who looks down with compassion) is one of the bodishattva (enlightened beings) of the Buddhist tradition.

Decoration of the Elephants' Terrace: (left) Airvana (or Airavata) a three-headed elephant; (right) a hunting scene

The kings and their court lived in timber buildings of which nothing is left. They were placed on a monumental terrace decorated with elephants. Elephants played a great role in Cambodia, both in peace and at war, and they are by far the most portrayed animal in the many reliefs and statues which decorate Angkor.

The terraces are decorated with Garuda and devatas: they appear on almost all the monuments of Angkor. Garuda is a Hindu deity: in Angkor it represents martial prowess. Devatas can be regarded as equivalent to the Nymphs of the Greek mythology; they protect forests, river crossings, villages, caves, mountains, etc. They are portrayed holding long strings of jasmine.

The walls of the central terrace are decorated with Garuda in the act of supporting the terrace, very much like Atlas holding up the world of the Greeks. The steps are decorated with Naga and giant stone lions. These are portrayed in an unrealistic way, an indication that the Khmer were not familiar with these beasts and that their iconography was based on tradition, rather than actual observation (see page three for a larger image of a lion).