Monuments near Nemrut Dagi
(Detail of a relief at Karatepe)

You may wish to see an introductory page to this section with a map or a page on the statues on the top of Nemrut Dagi first.

The Kingdom of Commagene was established in 168 BC by a local family linked with the Seleucids; these were the descendants of Seleucus, a general of Alexander the Great, who after the death of his commander and at the end of a series of wars, founded a large kingdom which included Mesopotamia, Syria and parts of Asia Minor.
His heirs, in alliance with the kings of Macedonia, were involved in the Macedonian Wars against the Romans; in 168, after the decisive battle of Pidna, the kingdom of Macedonia was split by the Romans into four principalities and later on became a Roman province. The Seleucids had to abandon their territories in Asia Minor and this favoured the foundation of independent states in the region. 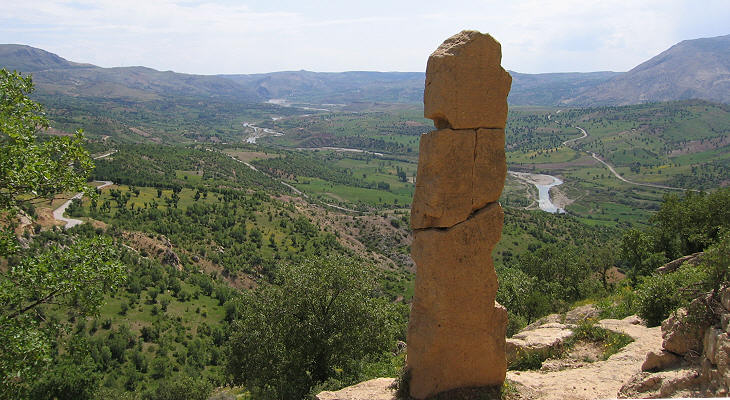 The southern slopes have pines mixed with spruce, tir, oaks, ash, walnut, and poplars below. (..) The lower parts of the valleys afford pasture; and the sides are cultivated in terraces, with gram, rhubarb, etc., about the villages. These, notwithstanding their peculiar construction, are picturesque from their situation, and rich in appearance, owing to the fruits and flowers about them.
The Expedition For The Survey Of The Rivers Euphrates And Tigris in the years 1835, 1836, and 1837, by Chesney, Lieut.-colonel. 1850
The area around Nemrut Dagi was the heart of Commagene: Samosata, the capital, was located in the plain to the south of the mountain, on the right bank of the Euphrates River, but the kings of Commagene preferred to spend their summers at Arsameia, a town located on high ground, not so far away from the top of the mountain. In spring it is a very pleasant location and the vegetation adds to its evocativeness. 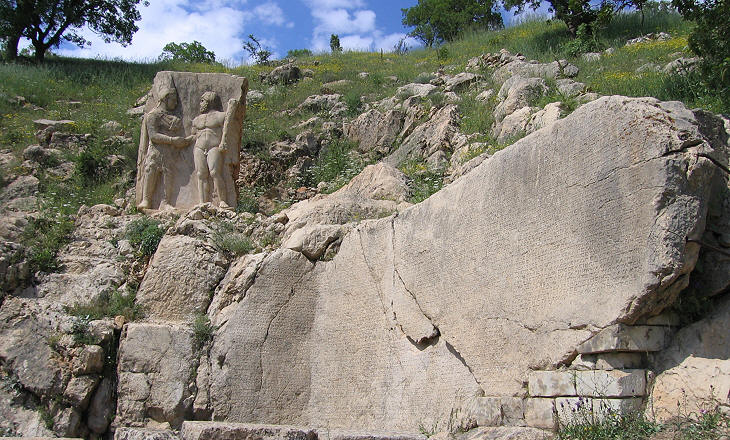 Arsameia: overall view of the relief and the inscription

The town was decorated with very large stela, all facing south and which probably could be seen from the villages in the valley; this could explain why they were not part of the decoration of buildings or squares. The most important stela has survived to our times; its importance is testified to by the fact that Mithridates I or his son Antiochus I, the kings who are thought to have founded/enlarged the town, dictated a very lengthy inscription on a nearby rock. 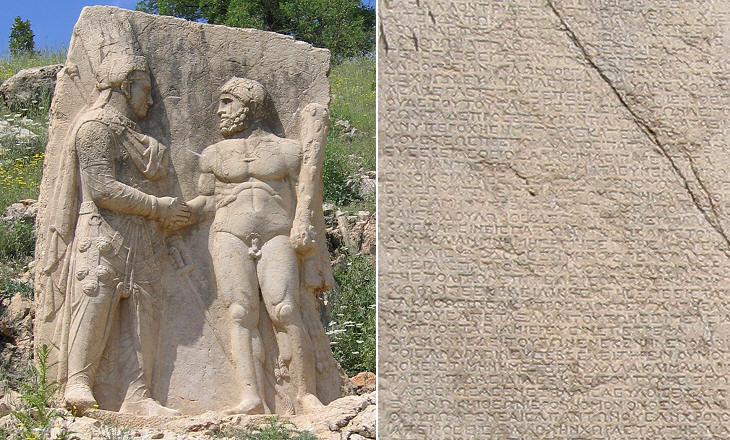 Arsameia: (left) main relief; (right) a detail of the inscription

The inscription is placed on a rock above a tunnel which probably was used as an escape from the town or for sallies; the inscription is in Greek and it provides a detailed account of the history of the town and its facilities.
The relief portrays a meeting between King Mithridates and Hercules; consistent with the Greek iconography of gods and demigods Hercules is naked and he carries a club and a lion's skin. Handshaking (dexiosis) is unusual in Greek iconography, but it is found in the Persian one and it was part of the Roman wedding ceremony. 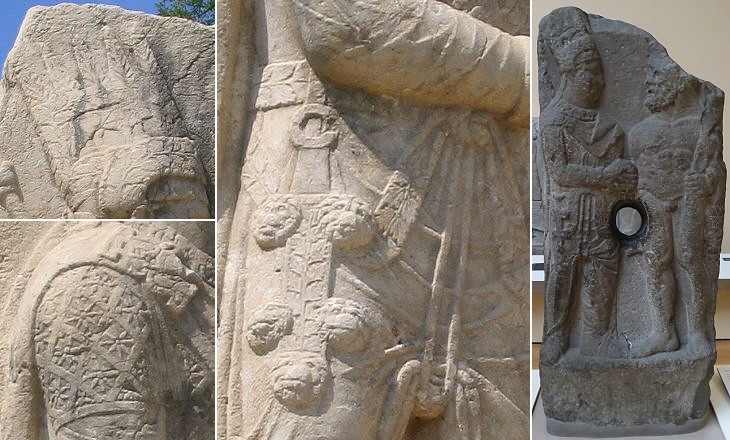 (left/centre) Arsameia: details of the relief portraying the king; (right) British Museum: a similar relief which was turned into an oil-press; see also other similar reliefs in the Museum of Gaziantep

The dress and the weapons of the king are very elaborate and they are depicted very accurately; the king wears a crown (atypical of Greece), but also a wreath of leaves, another indication of Commagene being in between two worlds. You may wish to see a citizen of Palmyra wearing a similar dress at his funerary banquet. 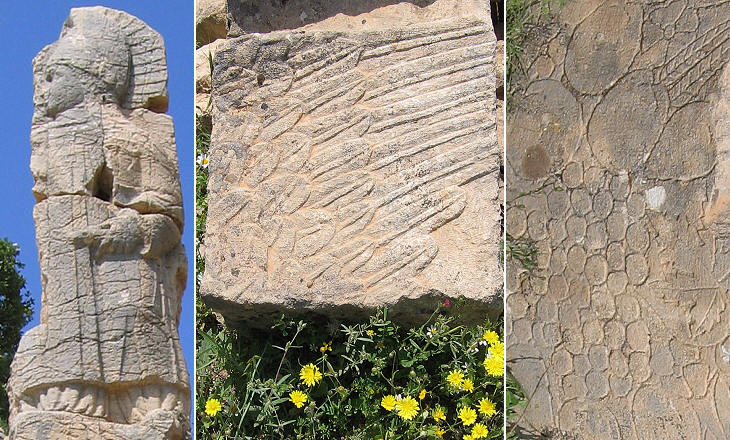 Parts of other stela can be found elsewhere in Arsameia; they are obviously placed in order to be seen from outside the town; the archaeological site has some other interesting reliefs for those who have the patience to explore it. 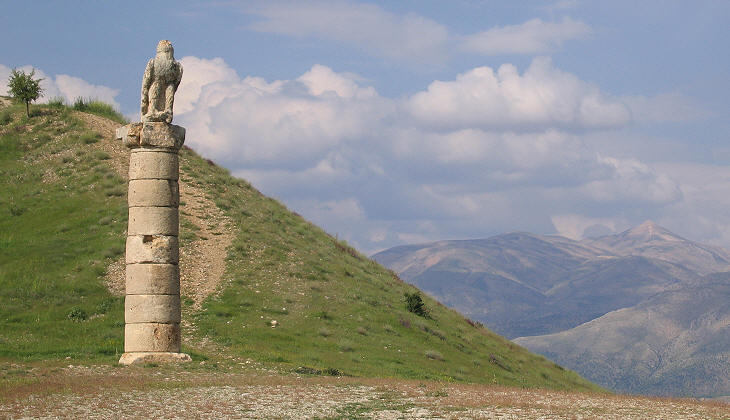 Another tomb in the shape of a mound surrounded by monuments is located on a hill at a much lower level than Arsameia. The site might have been chosen because it allows a direct view of the top of Nemrut Dagi and of the monument to King Antiochus I. It was built at a later stage for some members of the royal family. Funerary mounds can be found in many parts of the ancient world: from Greek Mycenae to Etruscan Cerveteri, from Macedonian Vergina to Numidian Medrassen. 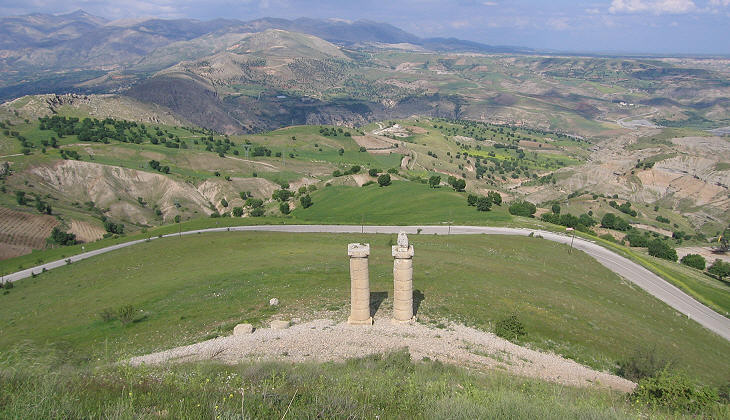 Karakus Tumulus: view from the top of the mound

It was surrounded by columns bearing statues or inscriptions; four columns are still standing and there is evidence of others. It is possible that the missing ones were used by the Romans for a bridge they built not far away (see below in the page). In addition this tomb was not hidden as that of King Antiochus, so its stones could have been used for a variety of purposes. 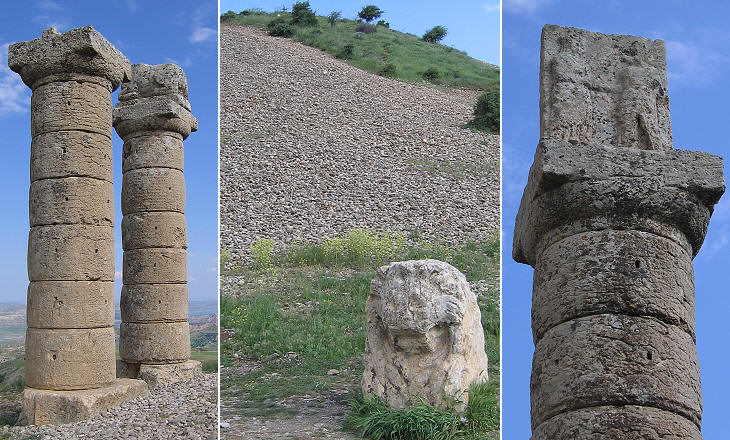 Karakus Tumulus; (left) columns which supported a lion and a bull; (centre) head of the lion; (right) column with a relief portraying a meeting between a king and Hercules

The reliefs and the statues portray subjects very similar to those found at the monument to King Antiochus, but the execution is poorer, perhaps an indication of the declining wealth of Commagene. In 72 AD Emperor Vespasian put an end to its independency and he placed it under the direct rule of Rome. 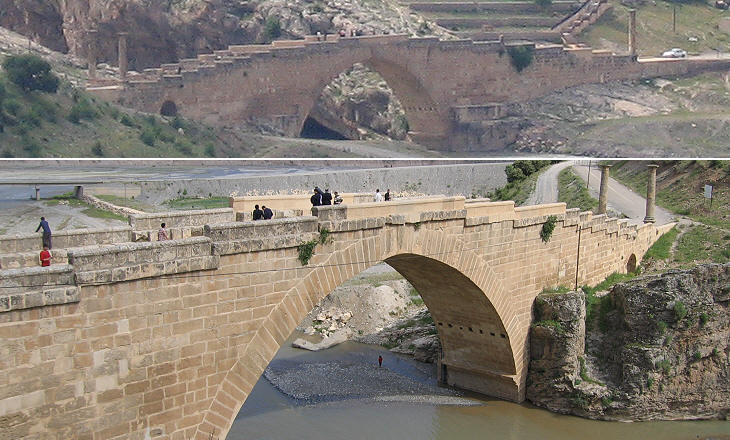 Emperor Septimius Severus led a long campaign against the Parthians between 197 and 202 AD. It was a very successful campaign during which the Romans were able to conquer Ctesiphon, their enemies' capital and to re-establish Roman sovereignty over most of Mesopotamia. It was probably the last Roman war which did not have the prevalent objective to defend/consolidate the empire. In 203 the victory was celebrated with a triumphal arch in the Roman Forum. 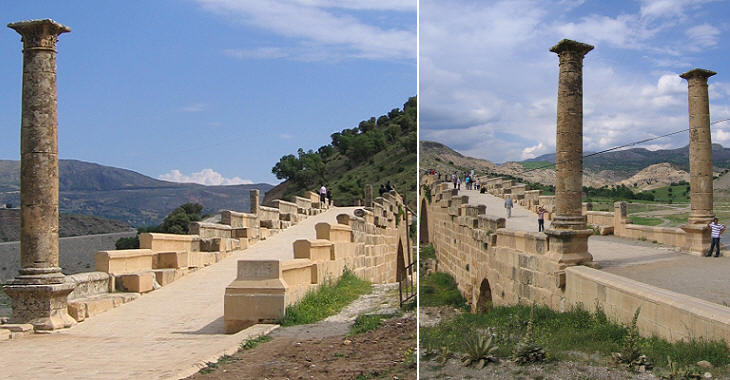 The legionaries of Legio Flavia Firma dedicated a bridge to the imperial family; they built it to improve communication in a region which was critical for logistically supporting the Roman troops who controlled the newly acquired territories. They erected four columns bearing dedicatory inscriptions at the entrances to the bridge. They had a special reason for being grateful to Emperor Septimius Severus; in a previous war their legion had lacked in courage; the Roman custom was to disband a legion charged with cowardice, but the Emperor preferred to reorganize it and to increase the commitment of its members he added firma (showing strength of character) to the legion's name. 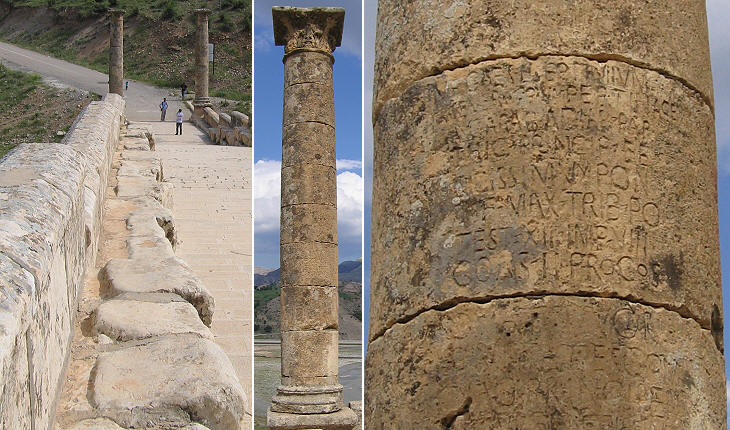 The three remaining columns are dedicated to the Emperor, his wife Giulia Domna and their son Caracalla; the fourth column was certainly dedicated to Geta, the other son of the Emperor.
After the death of Septimius Severus, Caracalla arranged the assassination of his brother and decreed his damnatio memoriae; all inscriptions, portraits and other references to Geta had to be erased.
The faithful and loyal legionaries of Legio Flavia Firma took away the whole column to be sure not to incur the new Emperor's wrath. It is possible that Caracalla crossed this bridge on his way to Carrhae. 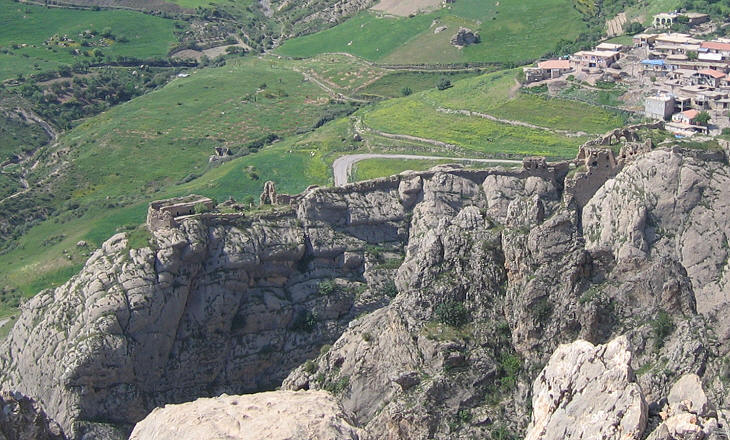 The hotels and facilities for touring Nemrut Dagi are located in the modern Turkish town of Kahta. Eski Kahta (Old Kahta) is the name given to a fortress built on a rocky ridge immediately below Arsameia; it is possible that initially the site housed the residence of a member of the royal family of Commagene. It was fortified by the Mamelukes and later on by the Ottomans.