September 7th 1836. We had to proceed beyond the head-waters, at nearly the same level, to the foot of the Nimrud Tagh, a group of nearly conical mountains, having on its southern front six distinct summits, all essentially of volcanic origin, and in part clad with brushwood of deciduous oak. We then turned to the left over the plain of Tacht Ali, when we began our descent towards the sources of the Kara Su (Black Water, i.e. the Western Euphrates, one of the two sources of the river).
William F. Ainsworth - Travels and Researches in Asia Minor, Mesopotamia, Chaldea, and Armenia - 1842
Previously to crossing tbe Euphrates the chain is more continuous, and has a higher elevation than the preceding branch; as the lofty groups of Sir Sera and Mut; Khan, the Ala Tagh, Sapan, Nimrud, and Darkish Taghs sufficiently indicate. Limestone and gypsum prevail, with basalt, and other volcanic rocks. Deep valleys separate the parallel ridges, and also break their continuity by occasional passes from the northern to the southern sides. This range separates Armenia from Mesopotamia.
The Expedition For The Survey Of The Rivers Euphrates And Tigris in the years 1835, 1836, and 1837, by Chesney, Lieut.-colonel. 1850 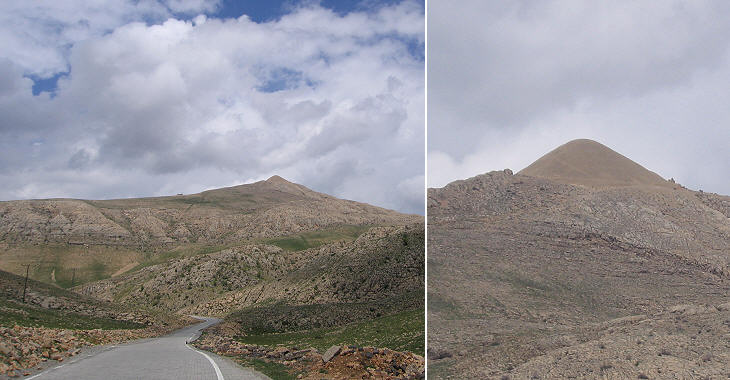 The public at large would hardly know about the Kingdom of Commagene if Karl Sester, a German engineer, had not queried his Turkish assistants about remaining evidence of the Royal Road which linked ancient Persepolis with the Aegean Sea. He did so because in the early 1880s he was assisting the Ottoman government in developing a new road in Eastern Anatolia and he thought that finding the route of the ancient one could be helpful. His assistants told him that they knew nothing about an ancient road, but instead they had seen fragments of gigantic statues on the top of Nemrut Dagi, the highest mountain of the region. Moved by curiosity, or just because he wanted to take some topographical measurements, Sester went to see by himself; he reached the peak of the mountain where he discovered several broken statues. Today the peak is bare rock and its conical tip consists of stones having the size of a fist, but in antiquity it was covered by forests.
At Urfa two gigantic columns were traditionally attributed to Nimrod (Nemrut in Turkish), the biblical founder of Babylon and for this reason the locals (the site is not so far from Urfa) thought Nimrod had petrified his enemies and placed their heads at the top of the mountain. Eastern terrace: overview of the thrones and of the heads of the gods: (left to right) Apollo, Commagene, Zeus, King Antiochus and Hercules

The mausoleum of Antiochus I (69-34 BC), who reigned over Commagene, a kingdom founded north of Syria and the Euphrates after the breakup of Alexander's empire, is one of the most ambitious constructions of the Hellenistic period. The syncretism of its pantheon, and the lineage of its kings, which can be traced back through two sets of legends, Greek and Persian, is evidence of the dual origin of this kingdom's culture.
Crowning one of the highest peaks of the Eastern Taurus mountain range in south-east Turkey, Nemrut Dag is the Hierotheseion (temple-tomb and house of the gods) built by Antiochus
UNESCO: from the criteria supporting the inscription of the complex in the World Heritage List in 1987.
In the following year Karl Sester returned to Nemrut Dagi; he was accompanied by archaeologist Otto Puchstein and together they started the first scientific research and excavations. They found a very long Greek inscription on the back of the thrones upon which the statues stood; it provided almost all the information we have about the purpose of this monument which resulted in the tomb (built for himself) by Antiochus I, King of Commagene. He described himself as "friend of the Greeks and friend of the Romans", but he should have added "and friend of the Parthians too" because his kingdom was a buffer state between Roman territories and the Parthian Empire. For this reason he gave to the statues of the gods a Greek and a Parthian name, so Zeus was also Ahuramazda, the creator deity of the Zoroastrian faith.

With a diameter of 145 m, the 50 m high funerary mound of stone chips is surrounded on three sides by terraces to the east, west and north directions. Two separate antique processional routes radiate from the east and west terraces. UNESCO
The design of the funerary monument was influenced by astronomy; two identical terraces face the East and the West, as if to mean that gods (and King Antiochus) exert their power over the entire world and see everything which humans do; the terraces were accessed via a smaller terrace on the northern side of the mountain. The eastern terrace retains the projecting platform which was used during ceremonies. In the inscription Antiochus gave detailed instructions about the frequency, content and financing of these ceremonies; the main ones took place on his birthday and on the anniversary of his accession to the throne; the ritual sacrifices were followed by a two-day banquet during which the priests were told to generously fill the cups with good wine. The size of the two main terraces indicates however that the number of participants in these ceremonies could be large, but not enormous.

Eastern terrace: gods on their thrones

The Hierotheseion of Antiochus I is one of the most ambitious constructions of the Hellenistic period. Its complex design and colossal scale combined to create a project unequalled in the ancient world. A highly developed technology was used to build the colossal statues and orthostats (stelae), the equal of which has not been found anywhere else for this period. (..) The landscaping of the natural site of Nemrut Dag is one of the most colossal undertakings of the Hellenistic period (some of the stone blocks used weigh up to nine tons). UNESCO
The statues consisted of several blocks of stones which were roughly sculpted with the exception of the highest one (covering shoulders, neck and head) which was more carefully designed. 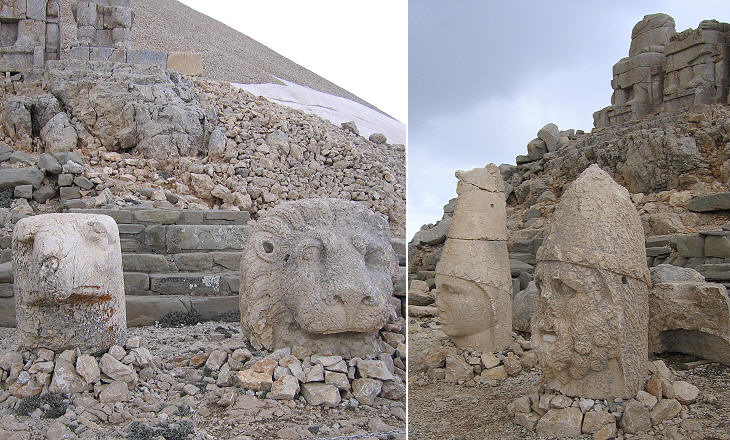 Five giant seated limestone statues, identified by their inscriptions as deities, face outwards from the tumulus on the upper level of the east and west terraces. These are flanked by a pair of guardian animal statues - a lion and eagle - at each end. UNESCO
The eagle is a traditional symbol of authority and in this particular case it was seen as the messenger of the gods. The lion is portrayed in a standing position which symbolizes its role as guardian of the site. The conic hat worn by the four male figures is more typical of Persia than of Greece. Antiochus ordered that he be portrayed as a young man, probably at the age he had been when he became king, because his accession to the throne coincided with his deification.

The greatest threat to the integrity of the property is the material damage caused by environmental conditions such as serious seasonal and daily temperature variations, freezing and thawing cycles, wind, snow accumulation, and sun exposure. UNESCO
King Antiochus had not only to deal with the opposite pressures of Romans and Parthians, he also had to choose with whom to side during Roman civil wars: Pompey acquired a great prestige in the region by eradicating the pirates from the coasts of Cilicia and Antiochus provided troops to him when he was at war with Caesar; he managed however to escape Caesar's vengeance as he was regarded as a loyal ally of Rome. 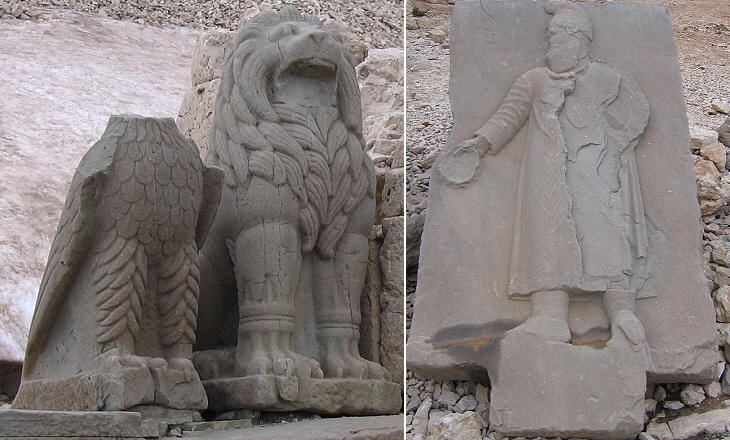 Western terrace: (left) statues of an eagle and a lion; (right) relief portraying a Persian ancestor of King Antiochus

Antiochus I is represented in this monument as a descendant of Darius by his father Mithridates, and a descendant of Alexander by his mother Laodice. This semi-legendary ancestry translates in genealogical terms the ambition of a dynasty that sought to remain independent of the powers of both the East and the West. UNESCO
Another example of the balanced policies followed by King Antiochus is the fact that he claimed to have both Macedonian (Greek) and Persian ancestors, who were portrayed in equal measure in reliefs which completed the decoration of the terraces. In the inscription at Nemrut Dagi he made an indirect reference to his difficult job: All along my life I regarded the devotion to gods as my most important asset and the source of the greatest joys; (..) thanks to this belief, I miraculously escaped great dangers, I overcame very difficult situations and I enjoy a long and happy life.

The portraits of Zeus and Hercules are very similar and the same can be said for those of Apollo and King Antiochus.
It is generally thought that the heads fell because of earthquakes, wind and extreme weather conditions; however the noses could have been broken deliberately as an insulting action towards false gods by early Christians or Arabs. 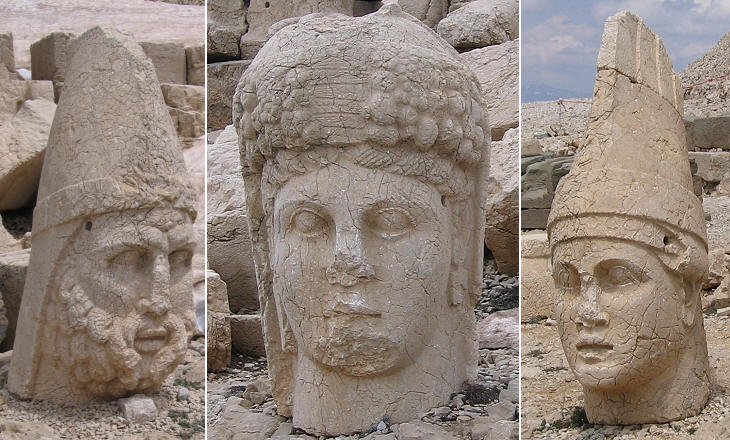 More so than the tombs at Karakus and Eski Kahta, the tumulus at Nemrut Dag illustrates, through the liberal syncretism of a very original pantheon, a significant, historical period. The assimilation of Zeus with the Iranian god Ahuramazda, and Heracles with the Iranian god Verathragna finds its artistic equivalent in an intimate mixture of Greek, Persian and Anatolian aesthetics in the statuary and the bas-reliefs. UNESCO
The statues represented more than one deity; the portrayal of Hercules was mainly based on the traditional iconography of his Persian counterpart; the female figure represented the kingdom of Commagene, but also the goddess of fertility and the statue of Apollo was also a personification of Helios and Mithra.
Commagene was in touch with civilizations which had elaborate religious beliefs and King Antiochus did his best to amalgamate them. 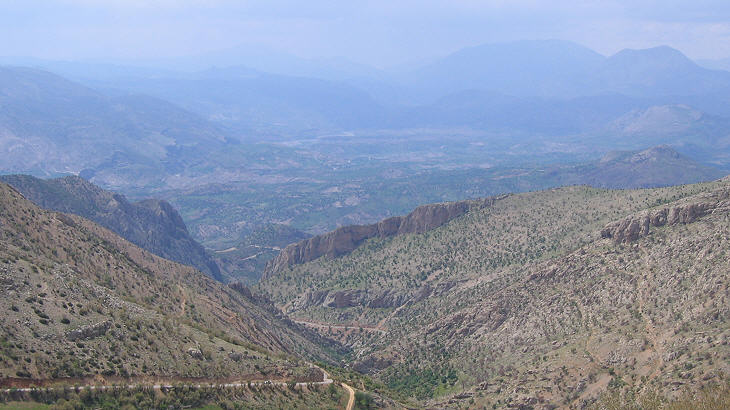 The actual site of Antiochus's tomb inside the conical mound between the two terraces has not been found yet.