Naqsh-e Rostam seen from the road to Persepolis In 330 BC Persepolis was burnt down either intentionally or accidentally by Alexander the Great. Only a few columns did not collapse whereas a layer of ashes covered the imposing palaces which celebrated the power of the Achaemenid Empire. The tombs on the cliff were left untouched and they became the symbol of that glorious period.
In 228 AD Ardashir, governor of Persia, deposed the last Parthian king and proclaimed himself the continuator of the Achaemenid Empire. He and his successors (Sassanid kings) had reliefs portraying themselves carved right under the tombs to indicate their link with the past rulers of the country. 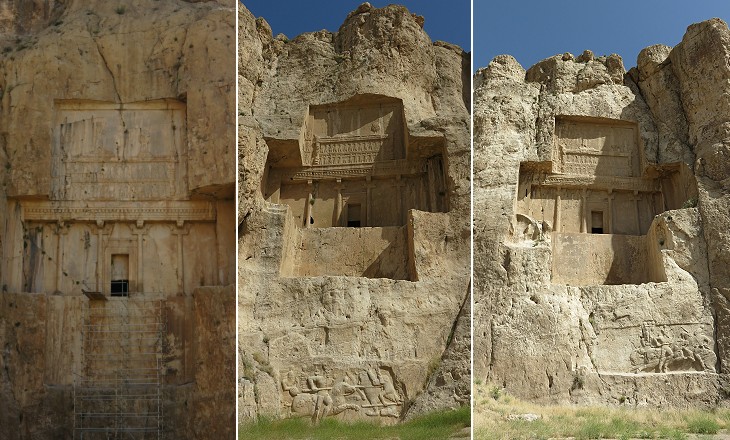 Tombs of Xerxes, Artaxerxes I and Darius II

The Achaemenid tombs have the shape of a cross. The tomb itself occupies the horizontal axis. It depicts the front of a palace with a central entrance which led to a small funerary chamber (all tombs have been looted). A large relief, similar to those found at the palaces of Persepolis, occupies the upper arm of the cross. The lower arm is void of decoration. All tombs have roughly the same size. They might have influenced the way the tombs of the kings of Pontus at Amasya are displayed and the decoration of Kale Kapi, a large tomb in north-western Turkey. The only tomb identified with certainty is that of Darius the Great, because of two long inscriptions in which the king proudly says of himself: I am Darius the great king, king of kings, king of countries containing all kinds of men, king in this great earth far and wide, son of Hystaspes, an Achaemenid, a Persian, son of a Persian, an Aryan, having Aryan lineage and calls for divine protection: Darius the King says: This which has been done, all that by the will of Ahuramazda I did. Ahuramazda bore me aid, until I did the work. May Ahuramazda protect me from harm, and my royal house, and this land: this I pray of Ahuramazda, this may Ahuramazda give to me!
At the time of Darius Ahuramazda was regarded as the divine creator and was symbolized by a faravar, a guardian angel holding a solar disc (a similar symbol can be seen in a Hittite relief in Turkey). The worship of Ahuramazda was not limited to Zoroastrians, but was shared by other Persian believers. This Sassanid carving is most likely the oldest one. An inscription explains that Ardashir rebelled against his Parthian king obeying a request by Ahuramazda. For the Sassanids the latter was no longer the divine creator, but the God of Good who fights his twin Angra Mainyu, the God of Evil. The head beneath Ardashir's horse is that of a rival for the throne and that beneath Ahuramazda's horse that of Angra Mainyu. An attendant behind Ardashir holds a fly-whisk, similar to reliefs at Persepolis. Shapur I, son of Ardashir, led a series of victorious campaigns against the Romans. He claimed to have killed Emperor Gordian III (whose head was most likely depicted beneath the king's horse) in 244. Philip the Arab, the man on his knees, declared himself vassal of Shapur in that same year. Valerian, the man whose hand is held by the king, was taken prisoner in 260.
The relief is almost identical to one Shapur had carved at Bishapur, a town he founded in the south-western part of the Iranian tableland. 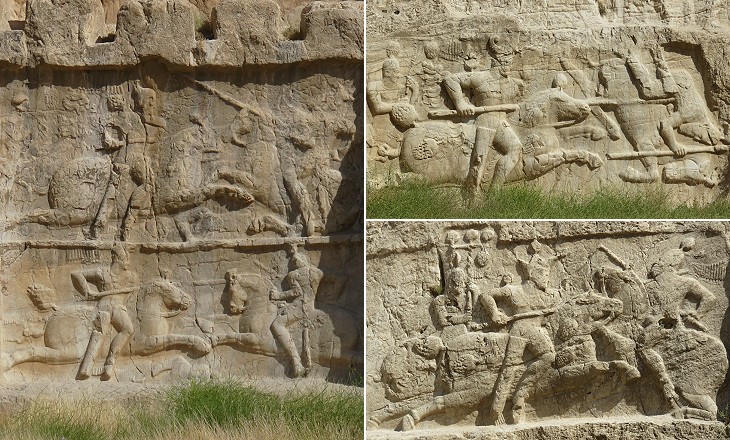 Other Sassanid kings placed carvings where they were portrayed killing enemies in combat. Overall they depict a medieval tournament. Some of these carvings were covered by the ground.
Naqsh-e Rostam means "image of Rostam". Rostam was a mythical Persian hero who was celebrated by Ferdowsi, a Xth century poet whose main work Shahnameh (The Book of Kings) is an epic account of Pre-Islamic Persia. The Sassanid reliefs were believed to portray Rostam. This is real architecture. (..) If it stood in a Mediterranean country, it would be hailed as the original source of domestic architecture in Quattrocento Italy and Georgian England. (..) Its beauty is in the spacing of ornament on a flat wall. It is surprising to find this principle, on which all domestic building since the Renascence has depended, fully stated in Persia about the middle of the VIth century BC.
Robert Byron - The Road to Oxiana - Macmillan 1937 (piece written in March 1934).
A similar building can be seen at Pasargadae. Tombs having the appearance of a tower were common at Palmyra. 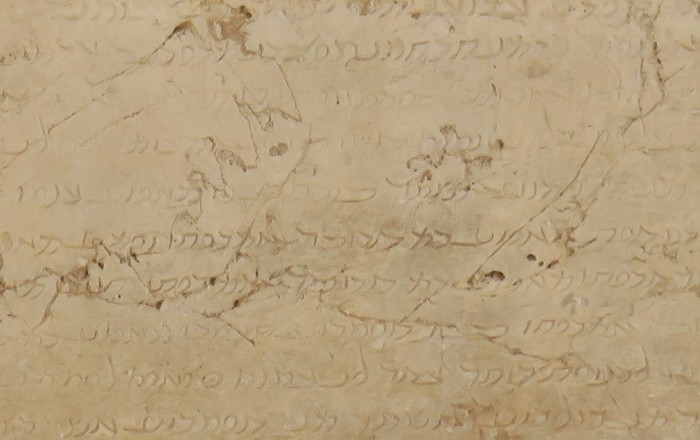 Naqsh-e Rostam - Inscription by Shapur I in Parthian, using an alphabet similar to the Palmyrene/Aramaic one

Excavations which unearthed the lower part of the tower found on three sides a very long inscription known as Res Gestae Divi Saporis, a reference to Res Gestae Divi Augusti (aka Index Rerum Gestarum), an inscription dictated by Emperor Augustus containing a list of his achievements (see that at Ankara). The inscription is written in three languages: Greek, middle Persian and Parthian. It contains long lists of provinces and town conquered by Shapur, but it ends with an appeal for divine protection, similar to that in Darius' inscription: Now as we serve and worship the gods with zeal, since we are the wards of the gods and with the aid of the gods we have searched out these peoples, have dominated them and have acquired fame for bravery, also whoever comes after us and rules, may he also serve and worship the gods with zeal, so the gods may aid him and make him their ward. (Translation by R. N. Frye). 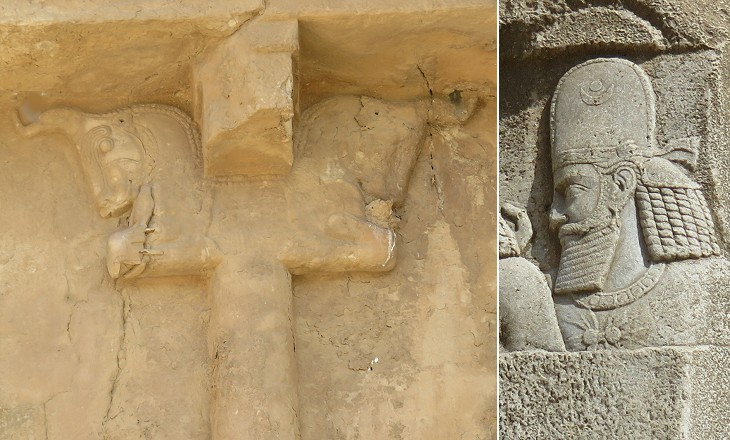 Details: (left) double-protome capital at the tomb of Xerxes; (right) member of Shapur's court, most likely the leader of a tribe or the governor of a province Four carvings have been found on three rocks surrounding a sort of small hall. They are almost hidden, contrary to those at Naqsh-e Rostam which is just a few hundred yards away. The carving portraying Ardashir is perhaps the oldest one. The king is followed by an attendant and by Shapur, his son whom he assigned to the throne. The relief, unlike some of the others, was not defaced. Another relief which you can see in the introductory page portrays Shapur and members of his court.
Rajab is the seventh month of the Islamic calendar. It is unclear why it was associated with the carvings. 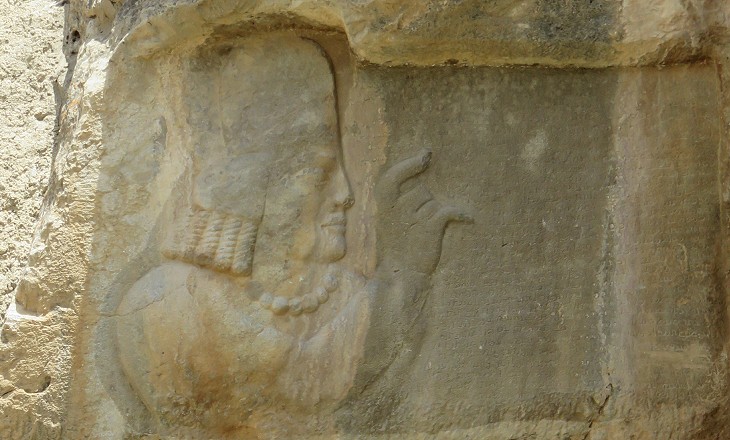 This carving is the only one which does not portray a king. Kartir was the éminence grise* during the reigns of Shapur and his successors Hormizd I, Bahram I and Bahram II. While almost all other Sassanid inscriptions were written in two or three languages to respect the presence of different cultures in the empire, that next to Kartir was written only in middle Persian. He claims to have purified the religion by killing heretics by fire and sword. He did not live enough to see the full triumph of his views. This occurred in the middle of the IVth century when King Shapur II decreed Zoroastrianism to be the sole accepted religion and began an all-out persecution of Christians, Jews, Buddhists and Manicheans, followers of Mani, a prophet born in Mesopotamia and executed by Bahram I in 276.
* a person who wields power and influence behind the scenes.

The image used as background for this page shows a member of Shapur's court with a horse-shaped hat.