Palmyra retains a wide array of tombs and recent archaeological findings indicate that research in this field is far from being complete. Tower tombs are a particular feature of Palmyra which can rarely be seen elsewhere in the Greco-Roman world; a series of them are in sight of the city and they immediately attract the attention of the viewer. 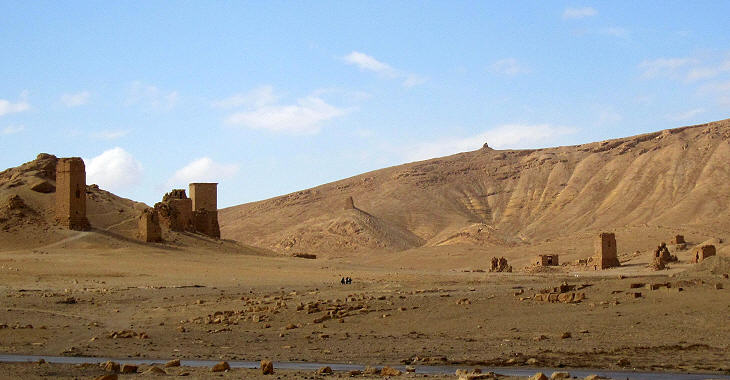 The Valley of the Tombs (south-western necropolis)

With reference to the Egyptian Valley of the Kings, the Royal Necropolis of Ancient Thebes, an area located to the south-west of Palmyra is called Valley of the Tombs; the tombs were built on high ground at the sides of the road linking Palmyra to Emesa (today's Homs) and Damascus. It is definitely a very evocative landscape. 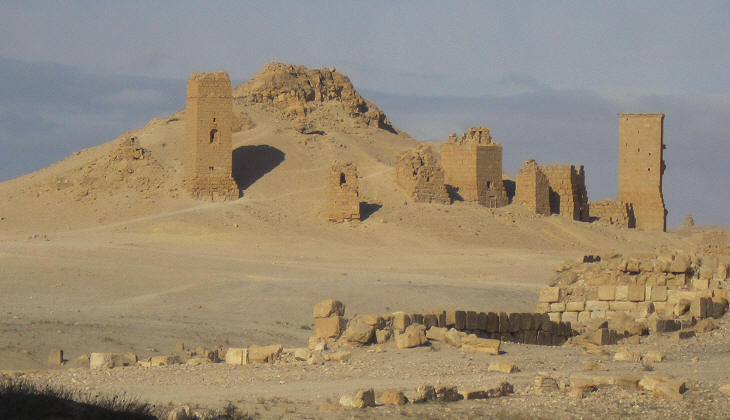 The construction of tower tombs on high ground was probably due to the belief that high places were sacred as they were close to the sky; clearly the choice of this type of tomb included also a more mundane objective; because they were very visible they called for respect and admiration of the families who built it. You may wish to see some very tall ancient funerary monuments in Germany, France, Spain and Sicily. 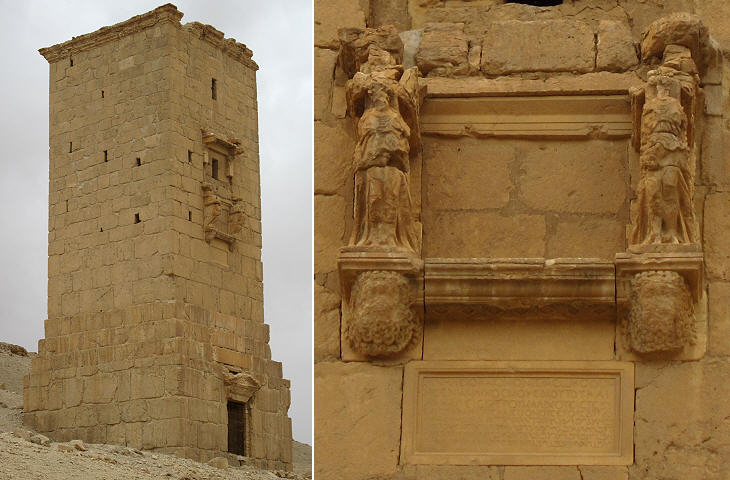 (left) Iamblichus Tower; (right) decorated bilingual (Greek and Aramaic) inscription; the two winged victories were placed at the sides of a relief showing a funerary banquet

Two of the mausoleums, which still remain pretty entire, preserve on their front very legible inscriptions, of which one informs us, that Jamblichus, son of Mocimus, built that monument, as a burial-place for himself and his family in the year 314, and the other, that it was built by Elabelus Manaius, in the year 414. The ornaments of these two are much in the same taste; but the latter is richest and most diligently executed. However, both are so much in the style and manner of the other publick buildings in general, that they may be supposed works not of very different ages.
Robert Wood - The Ruins of Palmyra, otherwise Tedmor, in the Desart - 1753
Archaeologists have identified different phases of the techniques which were utilized for the construction of tower tombs; the Iamblichus Tower (it is named after its founder) was built in 83 AD and it is a well preserved example of the last and most elaborate type of tower which had a neat and proportioned design and a series of decorative elements. 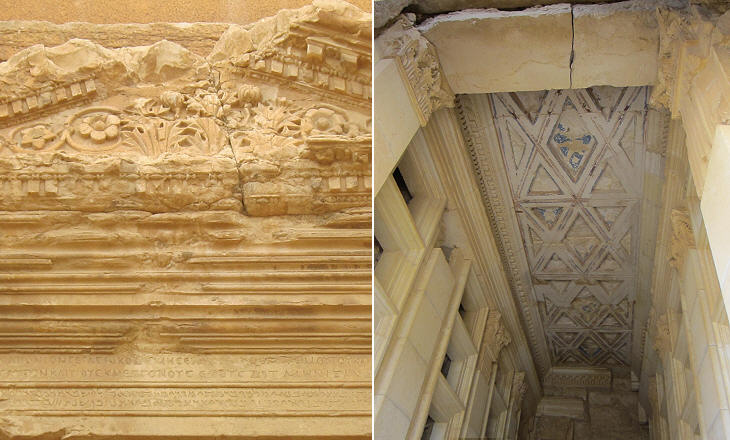 Iamblichus Tower: (left) detail of the lintel above the entrance with another bilingual inscription; (right) interior with the loculi (recesses large enough to receive a human corpse) and ceiling retaining traces of colour

The concept of family at Palmyra was that of a group of interrelated families, similar to a Scottish clan or a Roman gens; this explains why some towers have more than a hundred loculi; the sarcophagus of the founder was placed at the entrance; he was portrayed as if he were attending a banquet and greeting those who entered the tomb.
From inscriptions archaeologists have learnt that it was customary for the wealthiest inhabitants of Palmyra to bequeath money to priests in order that periodical ceremonies were held in their memory, a practice pretty similar to that of offering masses for the souls in Purgatory. See a page on Roman funerary rites. 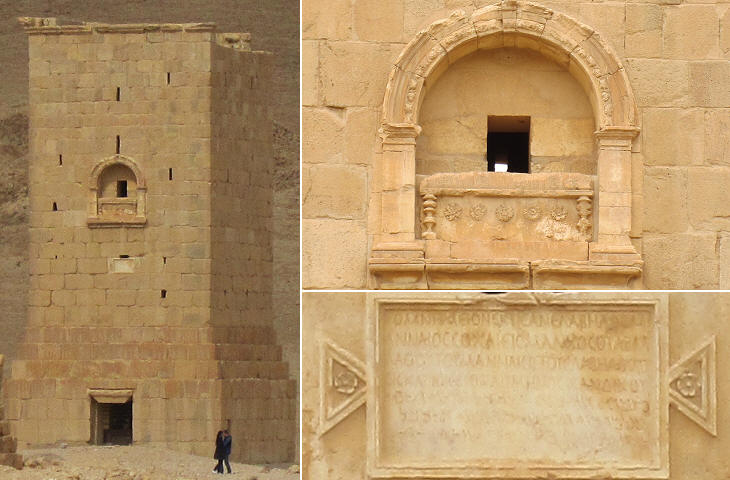 (left) Elahbel tower; (right-above) niche with a couch which supported a reclining statue of the dead; (right-below) bilingual inscription in a typical Roman frame

The Elahbel Tower was built in 103 AD; it can be regarded as the finest example of this type of building; its niche shows the importance of funerary banquets in the cult of the dead at Palmyra. It is not entirely understood why tower tombs which had become so elaborate were abandoned in the first half of the IInd century in favour of different types of tombs. 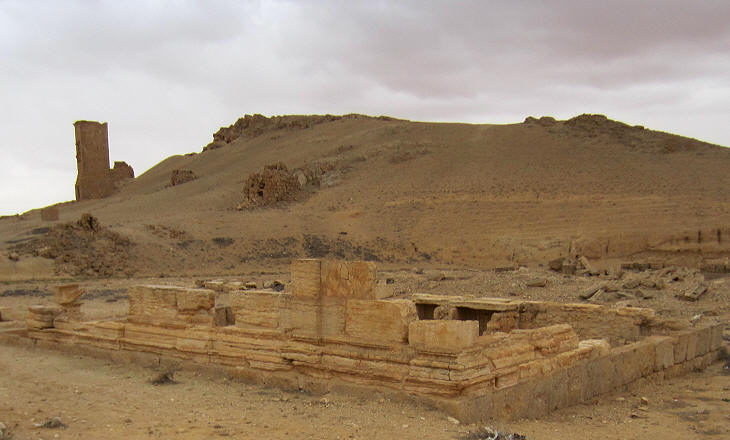 The move to underground tombs in the IInd century was perhaps motivated by economic aspects in the sense that it was less expensive to obtain a large number of loculi by excavating a rock than by building a tower; another aspect was perhaps the increased Hellenization of the society of Palmyra; the Greeks believed that the abode of the dead was in the underworld (the Etruscans too). Archaeologists have found towers built above a hypogeum, which probably marked a transition between the two types of tombs. (left) Hypogeum near Elahbel Tower; (right) a detail of its decoration

Hypogea were often decorated in a lavish manner which reflects the so called Roman Baroque style which became fashionable at the time of Emperor Hadrian and lasted until the first decades of the following century. See a tomb of that period in Rome. Three Brothers Hypogeum: lintel of the entrance (which shows that the inhabitants of Palmyra did not have a gift for synthesis)

The most famous hypogeum of Palmyra is located in the so called southern necropolis, which actually was most likely part of one large area of tombs which included also the Valley of the Tombs and a series of tombs which were included inside the walls of Palmyra at the time of Emperor Diocletian. The hypogeum is named after the three brothers who built it; it contains many interesting frescoes. 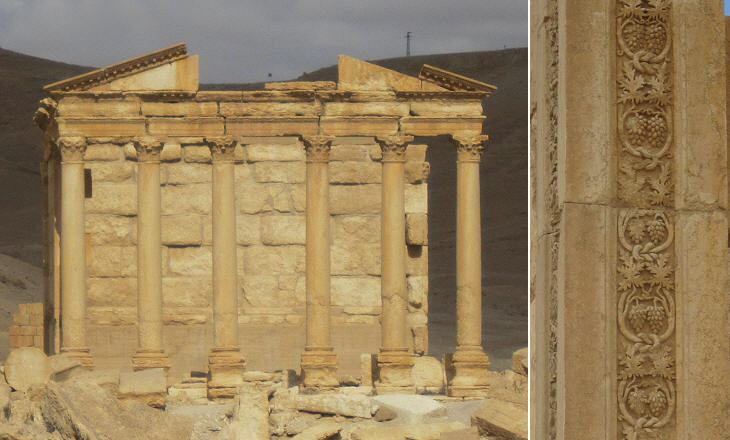 Tombs having the shape of a house or of a temple started to be built in 143 AD and they represent in chronological order the third type of tombs of Palmyra; they were common in many parts of the Roman Empire and in particular in the Anatolian peninsula (you may wish to see those at Imbriogon). The funerary temple at the end of the western end of the Colonnade is the most imposing one; it was built in the early IIIrd century and the detail of its decoration shown above can also be seen in buildings at Sabratha (Libya) of the same period. A series of tombs near the Funerary Temple which were incorporated into the walls built by Emperor Diocletian were being excavated in March 2011; sarcophagi and decorative elements were piled up waiting to be cleaned and catalogued. 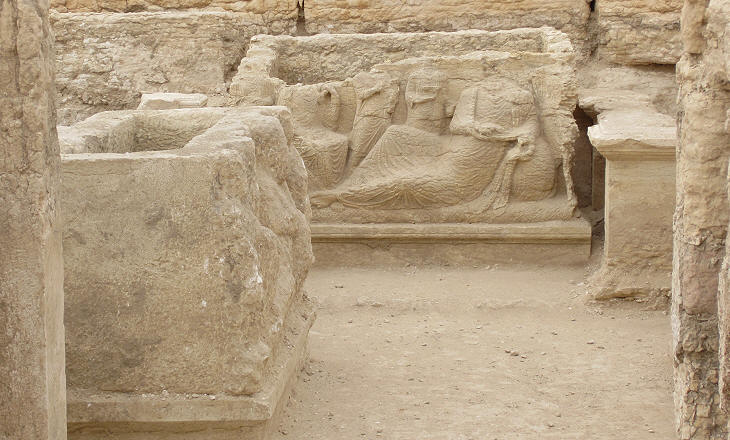 On a Friday (when the site was empty) it was possible to take a photo of the sarcophagi which were in the process of being unearthed; the sarcophagus on the back wall shows parents with their children attending a funerary banquet; while sarcophagi portraying the dead on the lid are common to many ancient cultures, at Palmyra the dead was often portrayed on the front side of the sarcophagus. In some tombs sarcophagi with banqueters in high relief were disposed so that they formed the image of a dining room. 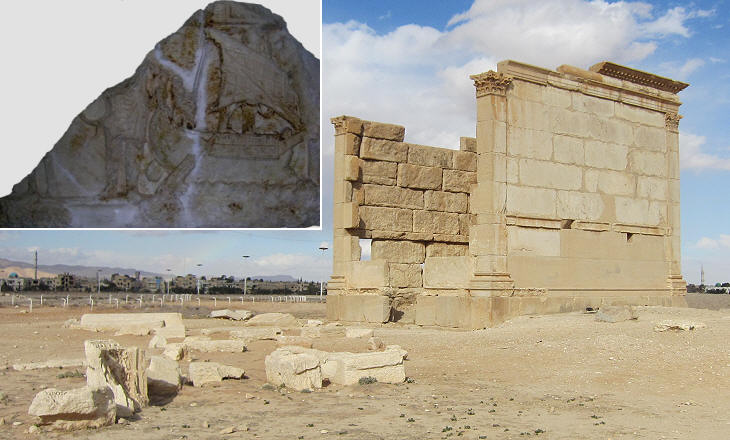 Tomb of Julius Aurelius Marona (outside the walls); (inset) relief found in the tomb

This tomb was built in 236; a relief on a sarcophagus found in this tomb portrays a merchant between a camel (only the legs are visible) and a sea-going ship in a sort of summary of the maritime and overland aspects of trade in which the deceased had been involved. This temple/house tomb was referred to as Qasr el Hayyé until the lintel of the entrance was found with the very Latinized name of the owner. 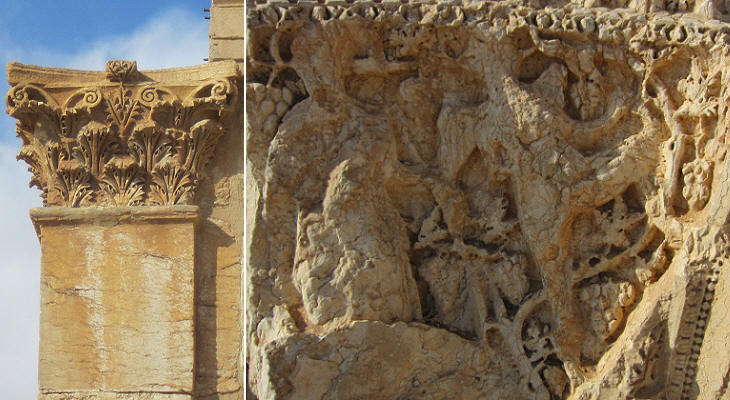 Tomb of Julius Aurelius Marona: (left) a capital; (right) a much worn out relief portraying two personages (of which one with wings) in a vineyard

An amazing aspect of Palmyra is the fact that the stones used for most of its monuments appear to have stood the ravages of time to a very different degree although they were in the same location; this is usually attributed to corrasion (wind erosion) which impacted more or less heavily depending on the exposure of the stones to the prevailing winds. 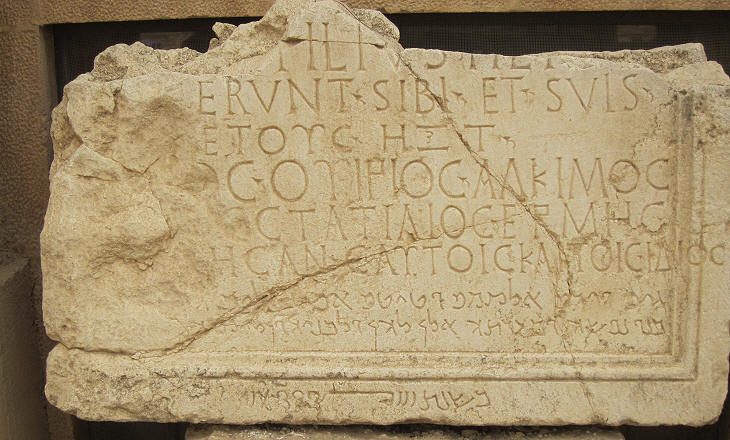 In the 1990s in the Valley of the Tombs an interesting trilingual funerary inscription was found; the entire Latin text has been reconstructed based on those in Greek and Aramaic: (C. Virius Alcimus et)/(T. Stat)ILIUS HER(mes)/(fec)ERUNT SIBI ET SUIS. It refers to a tomb built by two friends for them and their descendants and it is dated 56 AD; by comparing this inscription with others it appears that the two persons were publicans, i.e. officers in charge of collecting taxes. 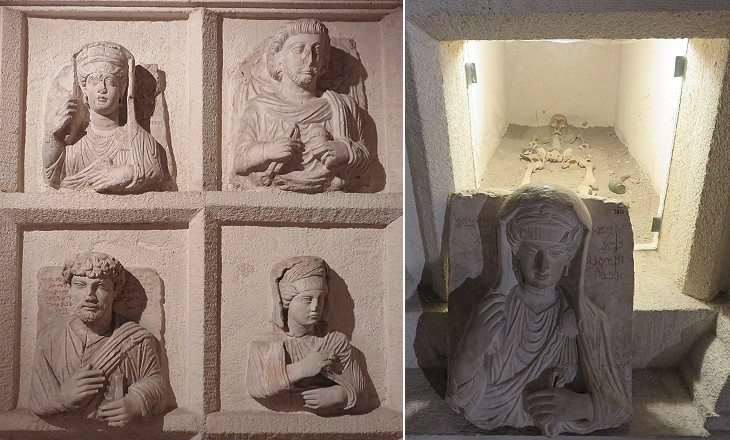 Archaeological Museum of Istanbul: reconstruction of a hypogeum at Palmyra (see other reliefs in the introductory page)

You may wish to the necropolis of Tyre in Lebanon or that of Porto near Rome. 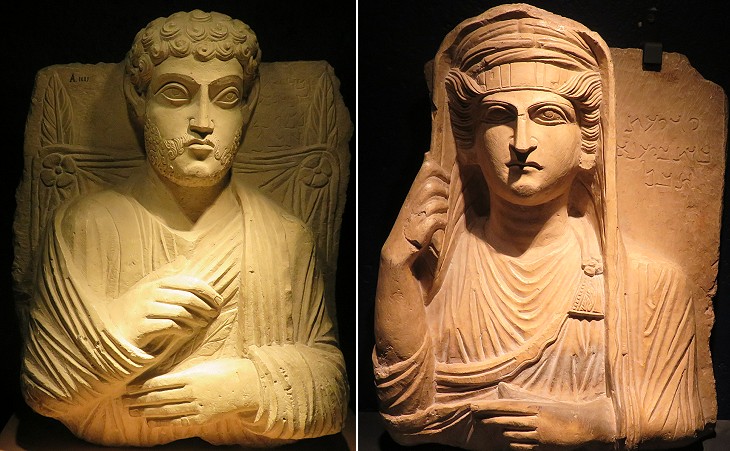 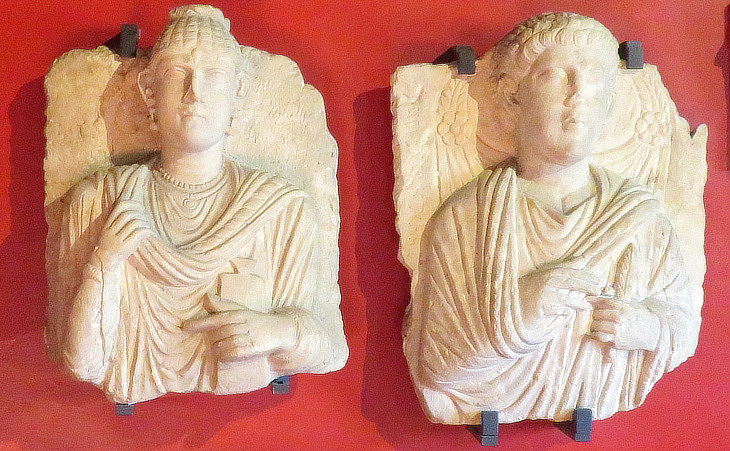 Go to:
Introduction
Temple of Bel
Colonnade
Other Monuments