- Palmyra - Temple of Bel
(the Colonnade) 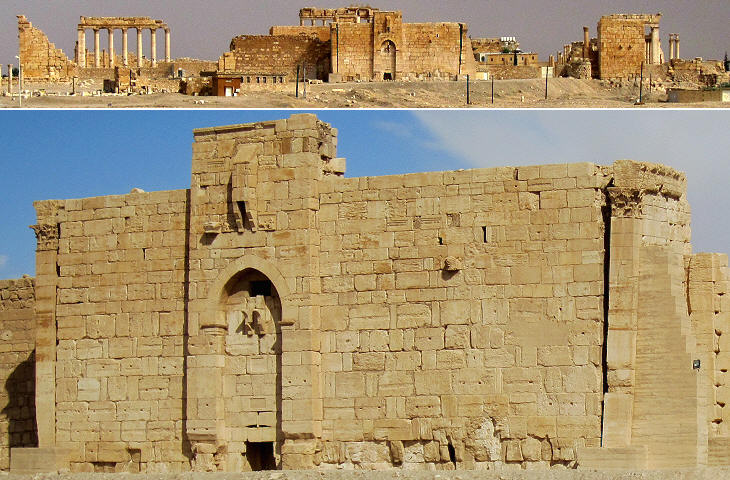 (above) Front view of the complex; (below) Arab bastion incorporating the main entrance to the complex

The solidity and height of the wall of its court tempted the Turks to convert it into a place of strength; for this purpose, they stopped up the windows to the north, east and south, and made a ditch before it to the west, where they destroyed the portico of the grand entrance to build in its place a square tower to flank that side.
Robert Wood - The Ruins of Palmyra, otherwise Tedmor, in the Desart - 1753
The Temple of Bel stands out from the religious buildings of Palmyra for its size and location; its main altar or adyton (space reserved to the god) was consecrated in 32 AD, but the complex was completed in the early IInd century; it was built on a tell (a low hill) where a previous temple has been identified by archaeologists; the area inside the temenos (outer wall) is an almost exact square with sides of more than 600 ft.
The complex was located at the eastern end of the monumental colonnaded street which crossed Palmyra. Size and location of the temple are an evident sign of the prominence of Bel/Baal over the other deities worshipped at Palmyra. 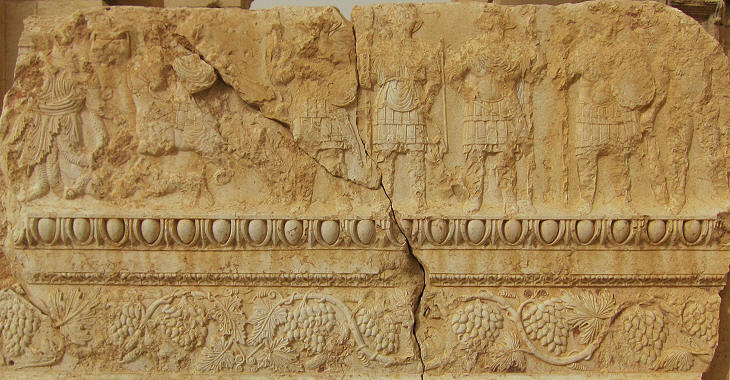 Temple of Bel: relief portraying (from left to right) a local deity, Bel on a horse, four other local deities in Roman military attire and Hercules (naked - far right)

The inhabitants of Palmyra wrote in a local alphabet which was a variation of the Aramaic one; at that time Aramaic was widely spoken in many parts of Syria and Mesopotamia; many of the inscriptions found by archaeologists are bilingual (Aramaic/Greek) and in some cases even trilingual (Aramaic/Greek/Latin); by studying these inscriptions archaeologists have identified correspondences between local and Greek gods (Bel/Zeus, Allat/Athena) which however are now thought to be just nominal; in other words Palmyra was only partially Hellenized from a religious standpoint and local deities retained their traditional attributes, even though they acquired a second Greek name. 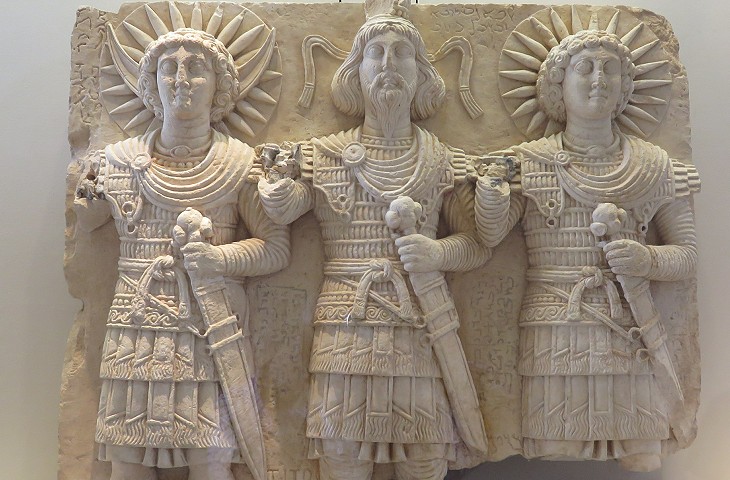 Bel was often portrayed together with two other gods representing the Sun and the Moon; the three gods formed a unity (they were not like the bickering gods of the Greek pantheon) and studies on the religion of Palmyra tend to indicate in this trinity an element of monotheism. 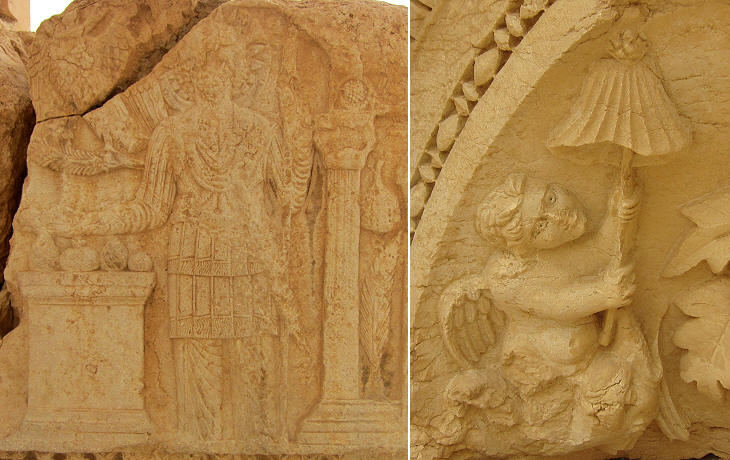 Other iconographic details such as parasol-bearers are due to the close contacts Palmyra had with the Persian and Mesopotamian world, where parasols were symbols of gods and kings alike (see a ceremony of the Eritrean community in Rome where parasols play a major role). You may wish to see XIIIth century frescoes in Rome with parasols associated with Pope St. Sylvester and Emperor Constantine. (above) Two ancient reliefs above the entrance of the Arab bastion; (below) decoration of the cornice of the cella (inner part of the temple); the image used as background for this page shows another example of the cella decoration

Where the decoration of the Temple of Bel departed from religious symbols it focused on representing aspects of a world which was remote from Palmyra, the inhabitants of which lived in a barren environment and perhaps for this reason loved to see leaves, fruit and flowers. Some of the reliefs because of their intertwinements can be regarded as an anticipation of Islamic arabesques. 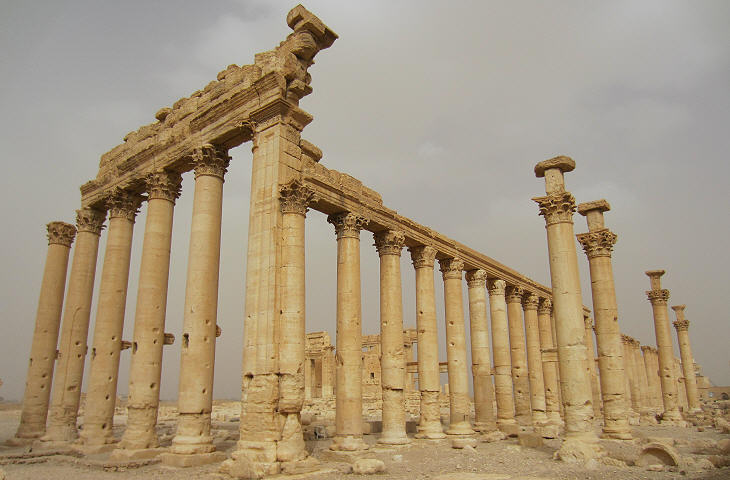 A very imposing portico was built very near the wall which limited the enclosure of the temple; it is possible that processions which entered the enclosure through an underground passage made one or more tours of the portico before accessing the temple; the overall structure of the complex has points in common with that of the Temple to Jupiter in Damascus. 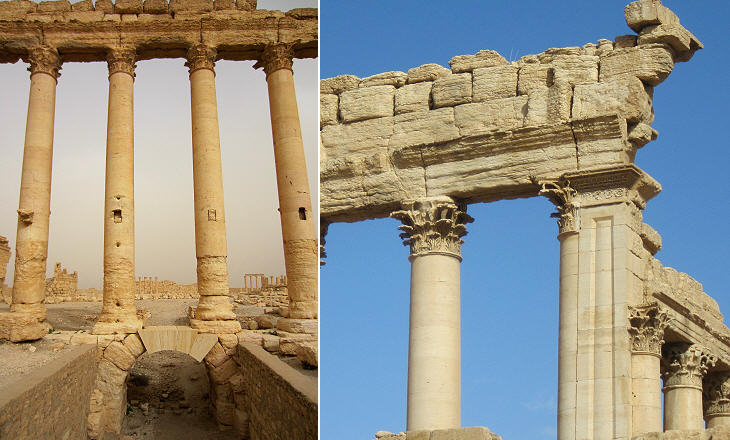 (left) Underground passage to the interior of the Temple; (right) detail of the portico

The decoration of the temple shows an aspect which characterizes all the monuments of Palmyra: a clear preference for Corinthian capitals. Most of the columns had side pedestals with the statues of the benefactors who financially supported their construction (similar to what can be noticed in the Colonnade); honorary inscriptions on such pedestals have provided archaeologists with very interesting information as they often indicated origin of the wealthy donors and dates of construction. 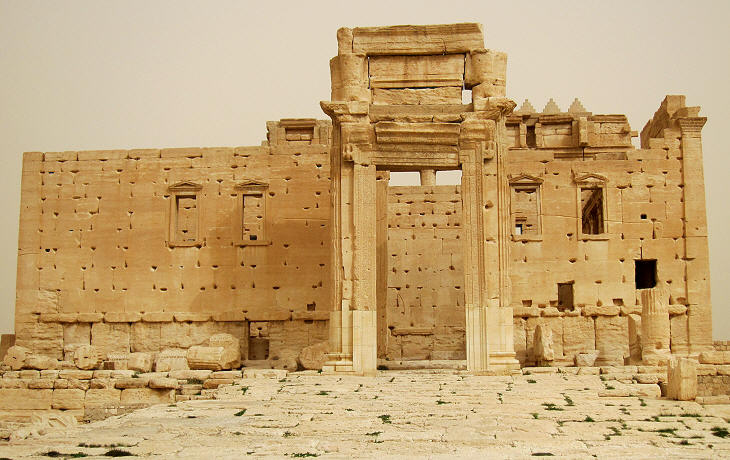 We were conducted to one of the huts of the Arabs, of which there are about thirty in the court of the great temple. The contrast between the magnificence of that building and the poverty of our lodging, was very striking. Wood
The (west-oriented) entrance to the temple is not placed at its centre; this has led to the belief that it was built in two stages: first the left (northern) side of the cella with an entrance from the south and then a smaller cella opposite the first one; the two were eventually united and given a common entrance.
The orientation of the temple as well as that of the entire complex is not perfectly aligned with the cardinal points; later on the temple was turned into a church and eventually into a mosque; after the abandonment of Palmyra some houses were nested inside the building; perhaps these changes caused some of the holes in the walls; they housed timbers or hooks which held panels. 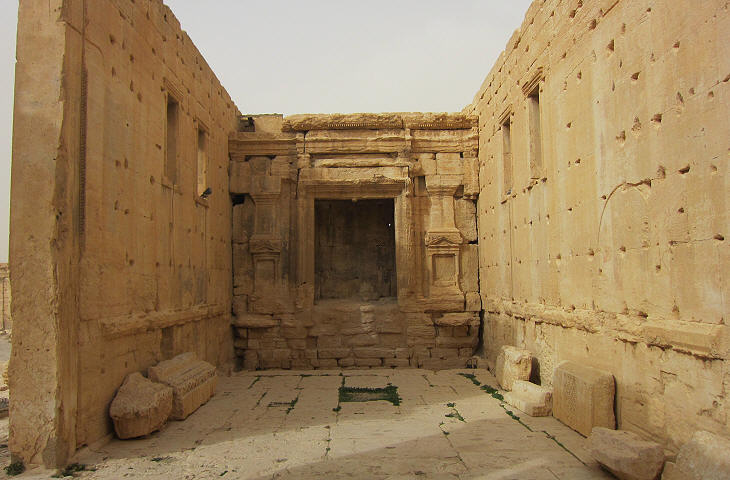 Cella: interior and main/northern niche (you may wish to see the cella of the Temple of Bacchus at Baalbek)

The northern niche housed the statues (or perhaps a large relief) of the three gods; the niche was possibly separated from the rest of the cella by a curtain or a wood screen as the access to the immediate surroundings of the gods was forbidden (this is the meaning of the Greek word adyton); the southern niche housed a portable statue which was carried in procession along the portico. 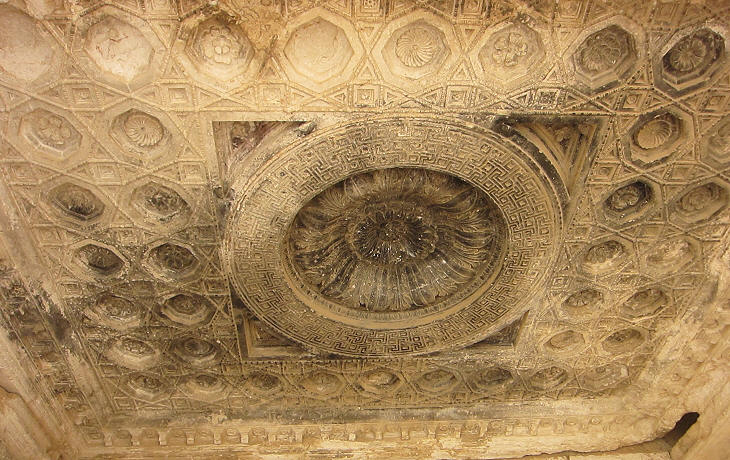 Ceiling of the southern niche

The decoration of this ceiling was purely ornamental; in 1753 its design became known in Europe through engravings based on drawings by Giovanni Battista Borra; it influenced the decoration of many English mansions which in turn influenced those of less known buildings. 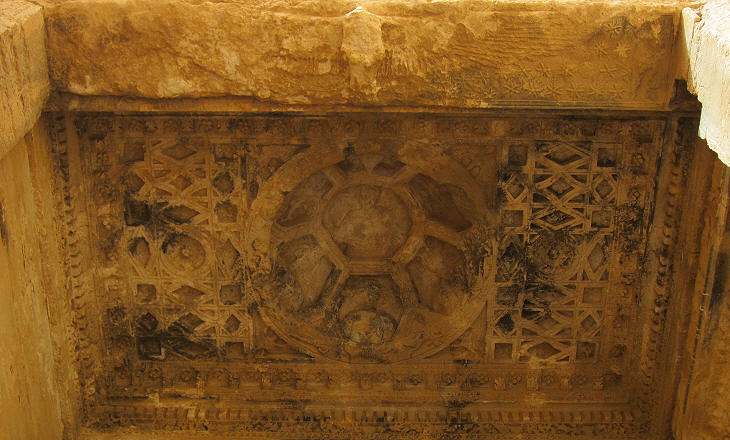 Ceiling of the northern niche

The soffit is the only part of it too much damaged to admit of a drawing, but we could discover that it has been richly ornamented in the same manner with the soffit of the small/southern door. Wood
The lintel of the niche shows a relief of an eagle holding a serpent or a caduceus; it symbolizes the movement of the sun (see a similar relief in a sanctuary in western Syria and in Baalbek where the identification of Baal/Bel with Zeus was more evident than in Palmyra). The ceiling of the niche is a single stone with an elaborate decoration portraying at its centre a series of deities: Bel is surrounded by six other deities; their corresponding Greek counterparts are (in Roman names): Jupiter, Mars, the Sun, Mercury, Saturn, Venus and the Moon. The seven deities were placed inside a vault so they were also a representation of the known planets (five known planets plus the moon and the sun). 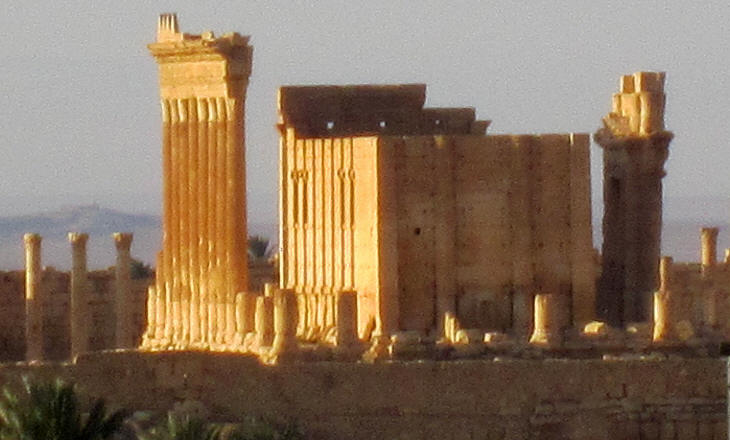 Temple of Bel at sunrise seen from a building at Tadmor, the modern town where tourist facilities are located