- Spalato - Other Buildings
(a sphinx at Diocletian's Mausoleum) 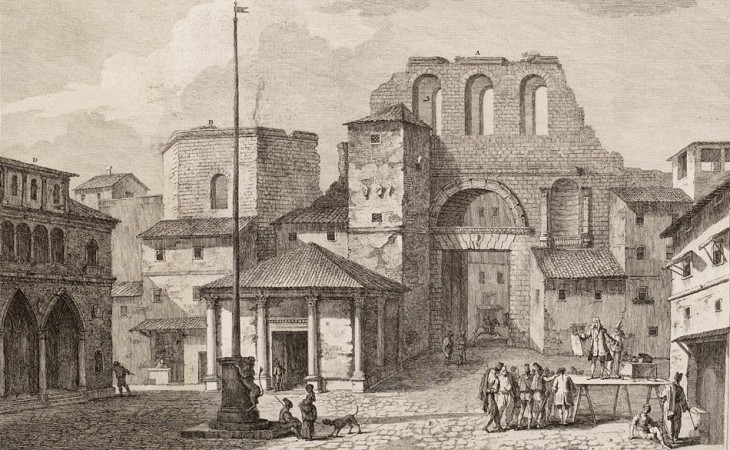 Porta Ferrea and the main square of the Venetian town in an etching by Robert Adam (1728-1792), a Scottish architect and engraver who published "Ruins of the Palace of the Emperor Diocletian at Spalatro in Dalmatia" in 1764. The street scene in the lower right corner resembles one depicted by Giuseppe Vasi

Adam indicated the building to the left as the Court of Justice and that near the gate as Guard-Room formed of Antique Columns, and other Fragments of Marble taken from the Palace. The latter is lost. 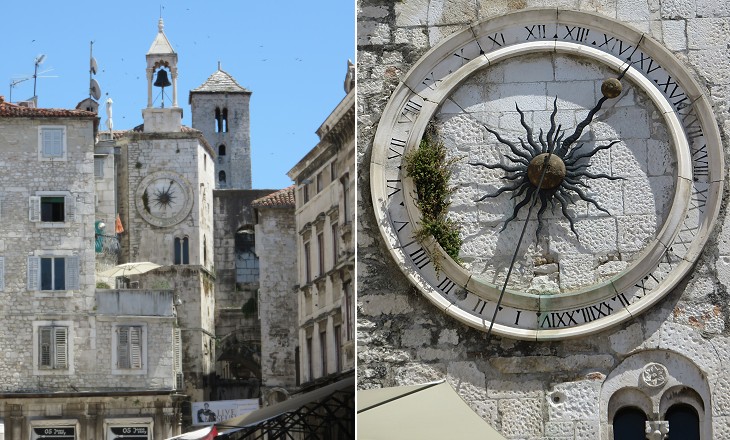 The most interesting feature of today's view is a large astronomical clock on what is referred to as the "Historical Clock Tower" by all modern guides and websites. It is hard to believe that Adam "deleted" the clock tower to show the ancient walls behind it, so one must conclude that a storey was added to the tower with the coats of arms shown by Adam and that the clock was moved there from another location. This is quite evident because the clock has lost its back (which no doubt it had) revealing the old stone work of the building and some vegetation. Its design is very similar to that of the clock of Chioggia, near Venice. 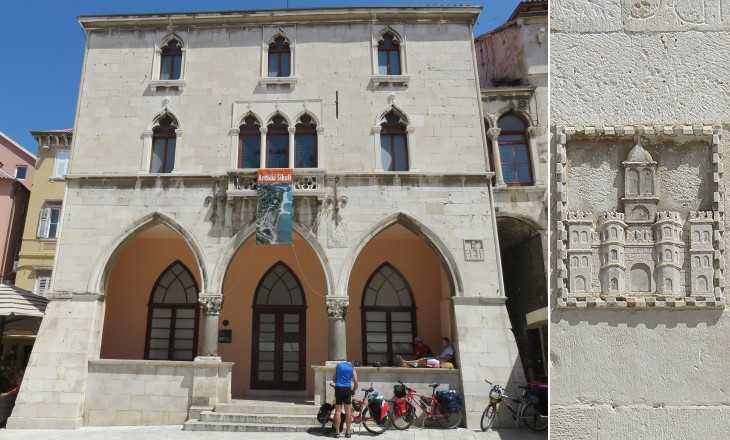 The building which Adam named as the Court of Justice was modified and enlarged during the XIXth century, but it retained the original 1443 Venetian portico. The coat of arms of the town is made up of a reconstruction of an ancient gate of Diocletian's Palace having on top a bell tower to indicate the importance of its Archbishopric See. 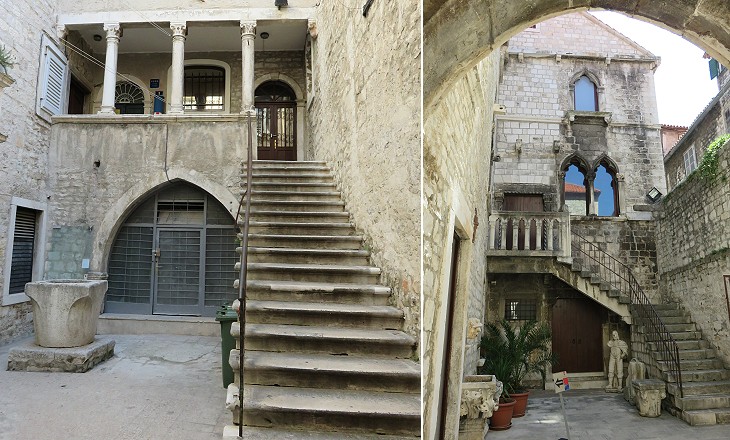 The narrow streets of Spalato abound in charming fragments of Venetian architecture. Some of the palaces of the old nobility have really fine windows, and many a courtyard of which a glimpse is caught in passing is rich with graceful arcades and staircases.
Sir Thomas Graham Jackson (1835-1924 one of the leading architects of his time) - Dalmatia, the Quarnero and Istria - 1887 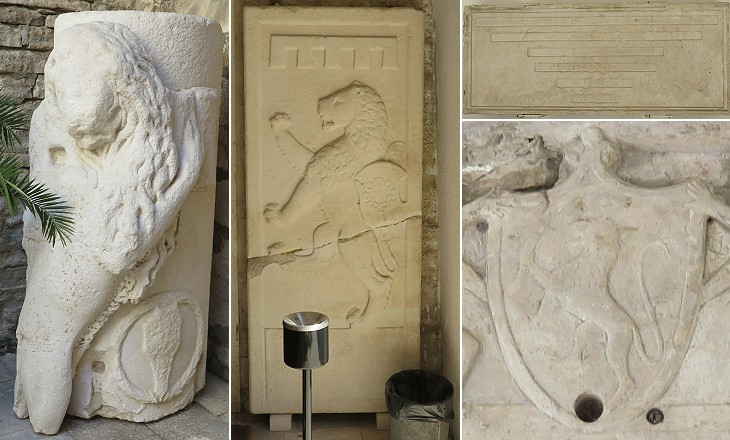 Museum of the City of Split: removed symbols of Spalato's Venetian past

The authorities of Split have erased/removed all reliefs and inscriptions which could recall the Venetian character of Spalato, including a table with standard measures of length because it was written in Italian.
In 1979 UNESCO inscribed Split in their World Heritage List. They could have recommended local authorities to pay some attention to the Venetian heritage of the town. 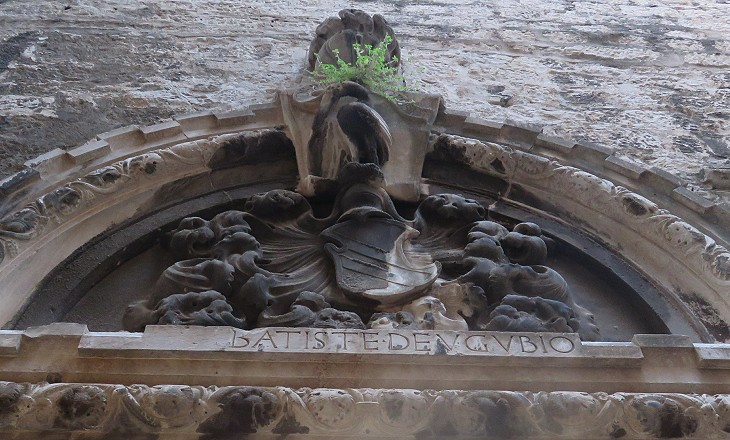 Coat of arms of the Deugubio Palace

Spalato became a Venetian possession in 1420 and most of its monuments, excluding those related to Diocletian's Palace, were built between that year and the end of the century. The foliage decoration of the chapels by Bonino da Milano (1427) and George from Sebenico (aka Giorgio Orsini) (1448) in the Cathedral influenced that of private palaces. 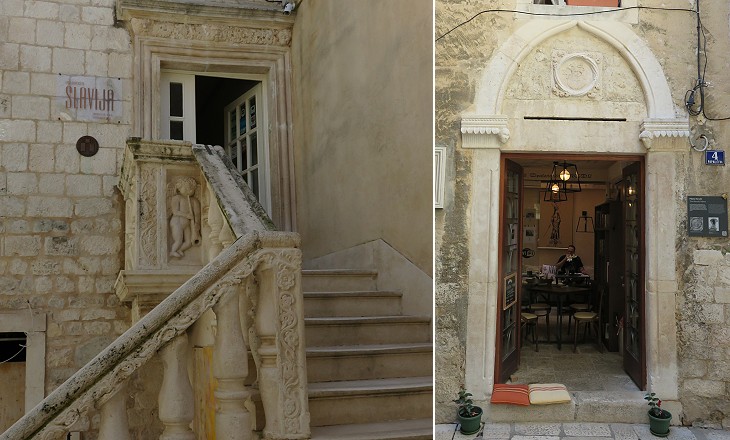 The authorities of Split have placed some small panels with key information on historical palaces. They have done so on all buildings they could label as "Gothic" as if this term (first used in Italy to indicate a style which departed from classic canons) did not need to be preceded by "Venetian" (i.e. Venetian Gothic) when applied to the monuments of the town. In case of palaces which very clearly could not fall into the "Gothic" category, they chose not to provide any information. 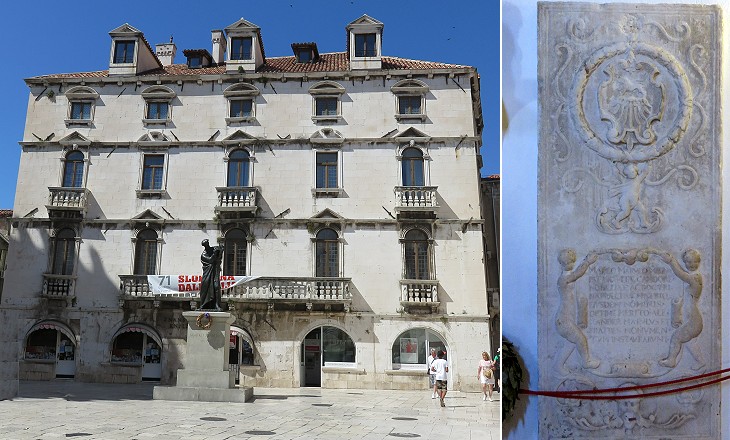 Marko Marulic (aka Marco Marulo) (1450-1524) is considered the father of Croatian literature owing to The History of the Holy Widow Judith Composed in Croatian Verses, a poem published in 1521 in Venice. At his time he was best known for his Latin works and in particular for De institutione bene vivendi per exempla sanctorum, a moralist treatise. He was familiar with Italian poetry and he translated some works by Dante and Petrarca into Latin (the international language of that time). 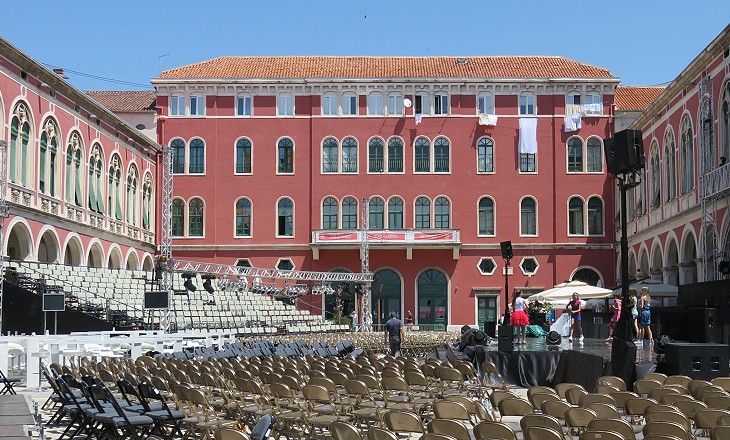 Procuratie (today Republic Square), a large square outside the walls of the town which was built in the 1870s by Mayor Antonio Bajamonti with a design similar to a section of Piazza S. Marco in Venice

Spalato strikes the visitor as the busiest and most thriving place in Dalmatia: its streets and squares are lighted by gas, while those of Zara and the other cities are still dependent on oil lanterns; and outside the town a new quarter of large modern buildings has sprung up, among which is a capital inn, where the visitor will fare as well as at Trieste or Fiume. These modern improvements are due to the energy and public spirit of Dr. Bajamonte, the late podestà (mayor), who however with the whole municipality was ejected from office by the Austrian government to make way for a new corporation of strictly Croatian sympathisers, which after an interregnum of two years was elected under the guns of a man-of-war stationed in the harbour, and which one may therefore assume to have been forced upon an unwilling people. Spalato has hitherto been no less strongly attached to the Latin or autonomous party than Zara herself, but nothing is now being left undone to give it the character of a Slavonic town, and to put an end to the Latin traditions of twelve centuries, during which the Croat has borne no rule within its walls.
Sir Thomas Graham Jackson - Dalmatia, the Quarnero and Istria - 1887 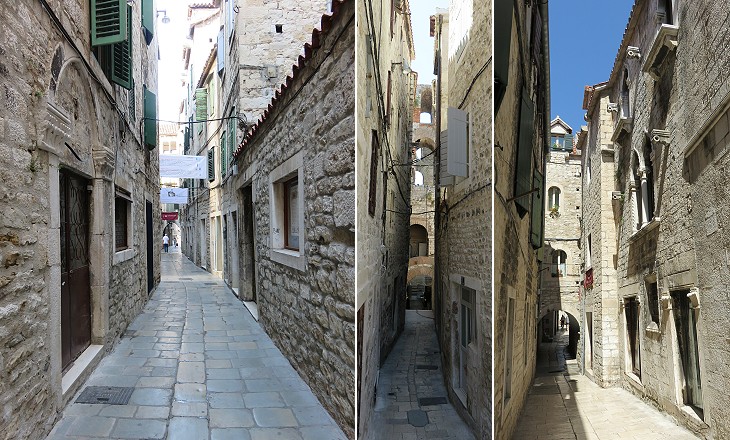 The image used as background for this page shows a coat of arms inside a typical Venetian frame.