Sebenico/Sibenik: Churches and Palaces
(a sphinx at Diocletian's Mausoleum) 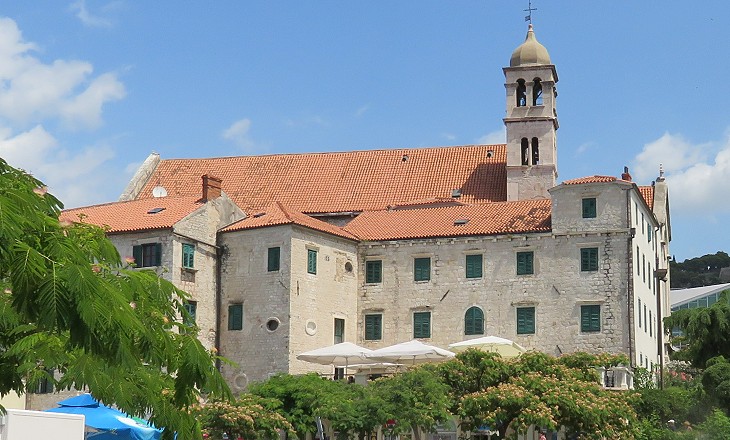 Of the other (than the Cathedral) churches in Sebenico there is little to be said. The Franciscan convent was rebuilt between 1322 and 1340, but contains little that can be referred to that date.
Sir Thomas Graham Jackson - Dalmatia, the Quarnero and Istria - 1887
Sir Thomas Graham Jackson (1835-1924) was one of the leading architects of his time. He visited Sebenico in 1885 and he wrote a very detailed account of its Cathedral, but he was less interested in the other monuments of the town.
The Franciscan Order is very present throughout Dalmatia. The first convents were founded in the XIIIth century and in 1327 Pope John XXII "assigned" Dalmatia to the Franciscans and Hungary to the Dominicans in order to solve a conflict between the two orders. 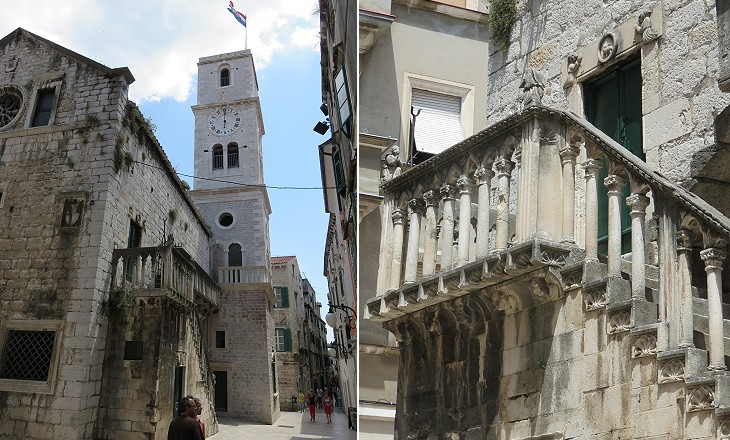 The church of S. Giovanni in the centre of the town adjoining the little Piazza dell'Erbe has a picturesque exterior staircase leading to an upper story. T. G. Jackson
The staircase was built in the late XVth century by John of Pribislav, an assistant to Giorgio Orsini, one of the architects involved in the construction of the Cathedral. The clock was added to the bell tower in 1648 by Venetian commander Leonardo Foscolo to celebrate his conquest of Clissa, an Ottoman fortress near Spalato. 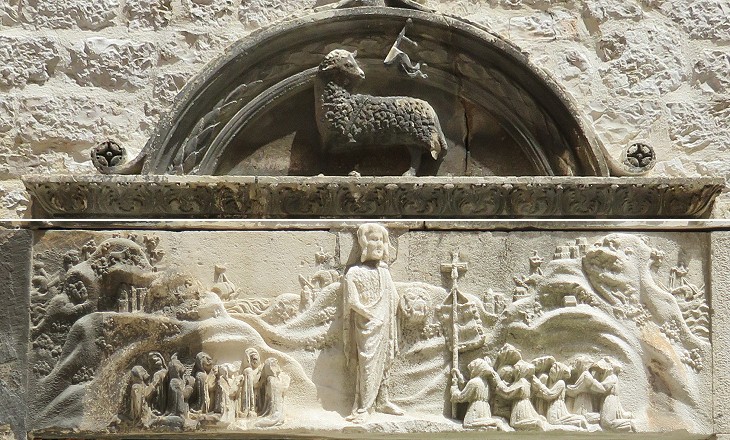 The lamb above the window is a traditional symbol of St. John the Baptist, because of the words he exclaimed when he saw Jesus: Behold the Lamb of God who takes away the sin of the world (John 1:29). The relief above the side doorway indicates that the church housed a brotherhood. The members, as an act of humility, wore a simple uniform and covered their head with a hood. 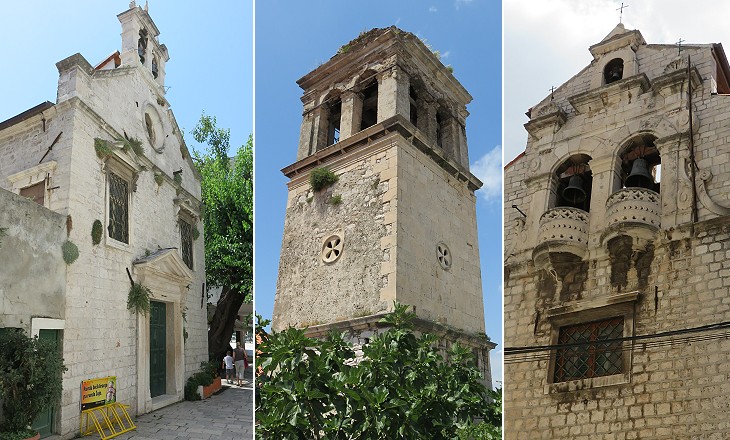 (left to right) St. Nicholas'; St. Lawrence's; Assumption of Mary (assigned to the Greek community in 1810)

The Greek church, a little lower down the street, has a curious western bell-cot with projecting balconies for the ringers. This and all the other churches of Sebenico not already named are of late work, and there are no traces of any other public buildings of greater antiquity than the sixteenth or seventeenth century. T. G. Jackson
Similar to Venice, although on a smaller scale, Sebenico was a cosmopolitan town and the various communities had their own churches. 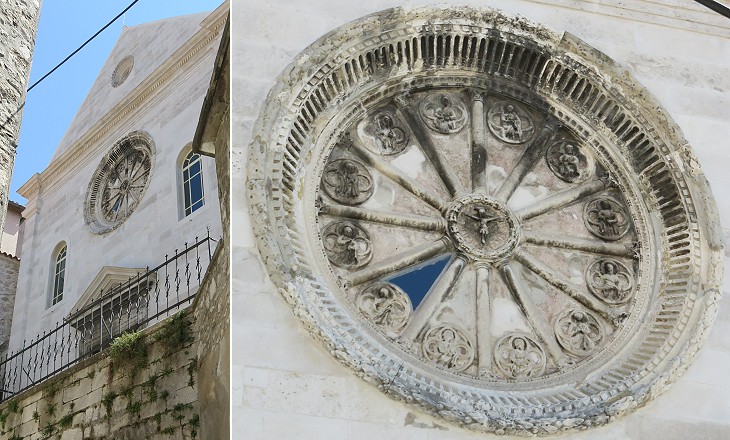 The 1608 inscription on the lintel says "IN DEI DIVIQ(ue) MARCI HONOREM" so the church was dedicated to St. Mark or it was built by a brotherhood whose patron was the Evangelist. Its rose window is decorated with reliefs showing the Twelve Apostles. It houses a wooden cross which, according to tradition, was found floating in the sea in the XVth century. This tiny chapel is perched at the top of a long staircase. Its original dedication might have been a different one because of a very worn out small statue in the tympanum. Its small terrace offers a fine view over the Cathedral. The design is typically Venetian and its two windows very near the entrance recall those of St. Roch's at Spalato. 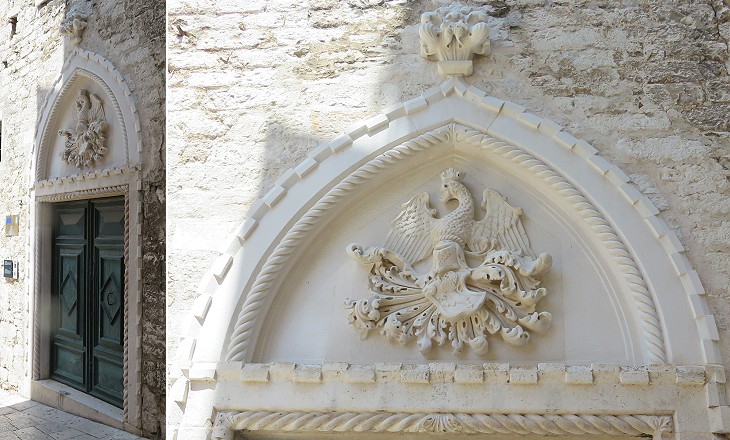 There are numerous doorways with a straight lintel under a pointed tympanum enclosed by the Venetian billet moulding and charged with well designed heraldry and flowing mantling. Heraldry indeed was rather the fashion at Sebenico; there is perhaps no town in Dalmatia from which a larger collection of escutcheons can be made. T. G. Jackson
The palace is named after a local wealthy XIXth century family. 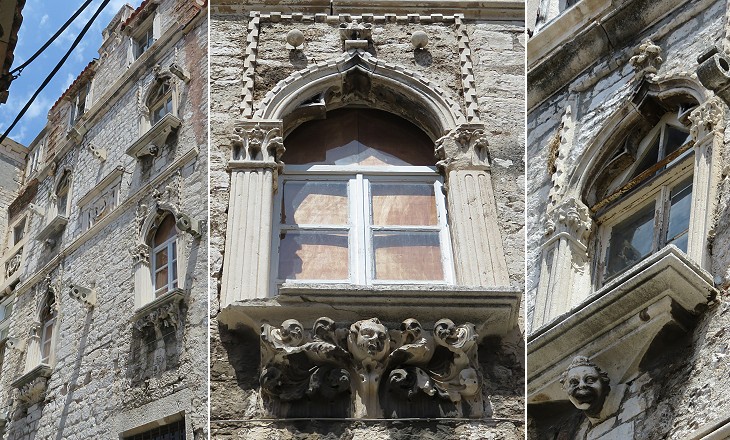 Once established in Dalmatia the Renaissance style soon prevailed over the older Gothic art for all buildings of importance, though it would seem that private houses were still built in Venetian Gothic. T. G. Jackson
The seizure of Clissa gave Leonardo Foscolo great fame and in 1650 he was appointed Capitano Generale da Mar (Chief Admiral) and sent to the defence of Candia where however he did not achieve great results. In 1654 he settled in Venice where he hoped to be elected Doge, but had to content himself with less prestigious positions. Foscolo is the surname of many Venetians who lived in Dalmatia and in the Levant. Ugo Foscolo, a great Italian poet of the early XIXth century, was born on Zante. 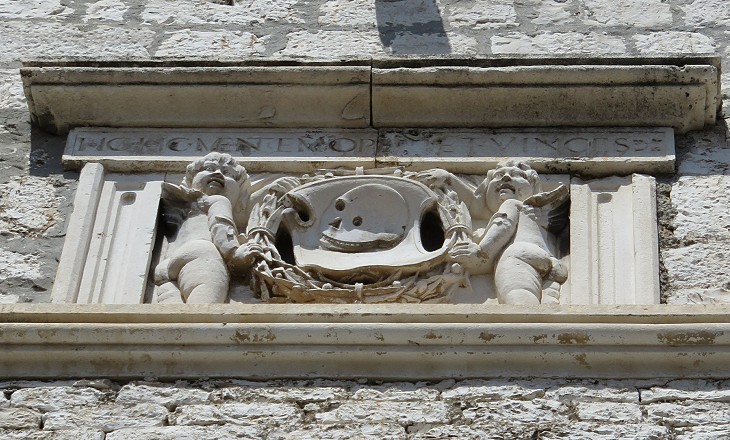 Occasionally mottoes and heraldic symbols can be rather puzzling. The worn out inscription of which only "MENTEM" and "ET VINCES" are clearly readable maybe meant Use your brain and win. Assuming this interpretation is correct the two cupids are holding a a laurel wreath, a symbol of glory, with inside a skull as symbol of the brain and not of death. 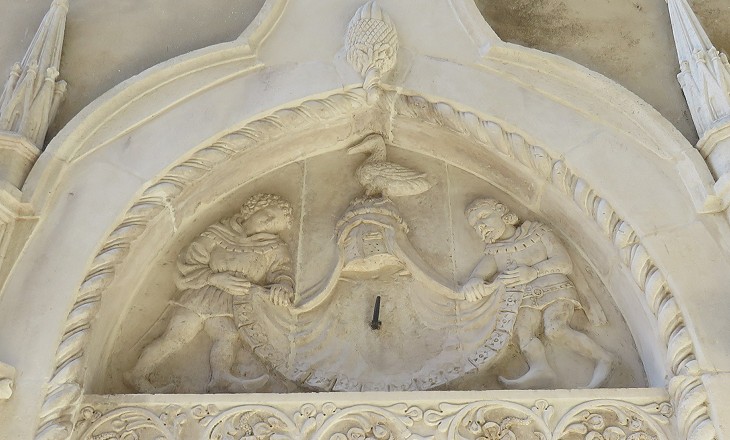 Portal with an elaborate decoration

The Foscolo and other palaces are believed to have been designed by Giorgio Orsini or by one of his assistants. Their rich decoration indicates that Sebenico was particularly prosperous during the second half of the XVth century. Its economy began to decline in the XVIth century when Venetian spice trade routes across the Mediterranean Sea suffered the competition of those opened by the Portuguese who circumnavigated Africa and reached the coasts of India in 1498. 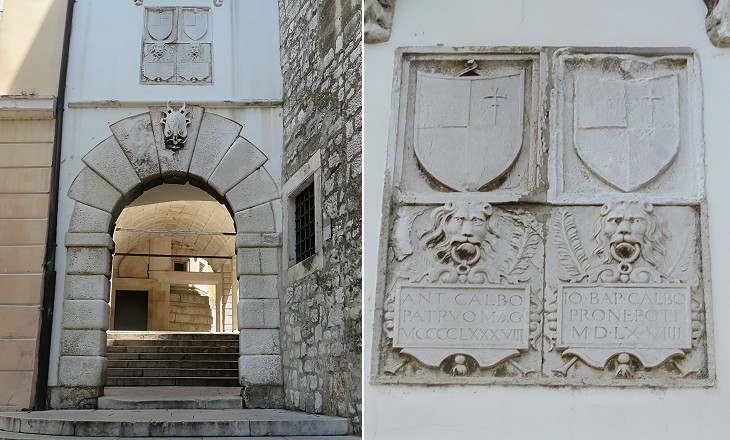 Antonio Calbo was appointed Conte (Earl, traditional title of the Venetian governors in Dalmatia) of Sebenico in 1486. He was a collector of ancient manuscripts and he promoted the cultural development of the town. He returned to Venice in 1489. Giovanni Battista Calbo was a pronepote (great-grandson) of Antonio and he held the same position before being assigned to Pola, a Venetian town in Istria. The Earls ruled the towns with the assistance of a council of local noblemen and taking into account the views of the local clergy. Because they held their positions for short periods, the actual power rested on a small number of local families. 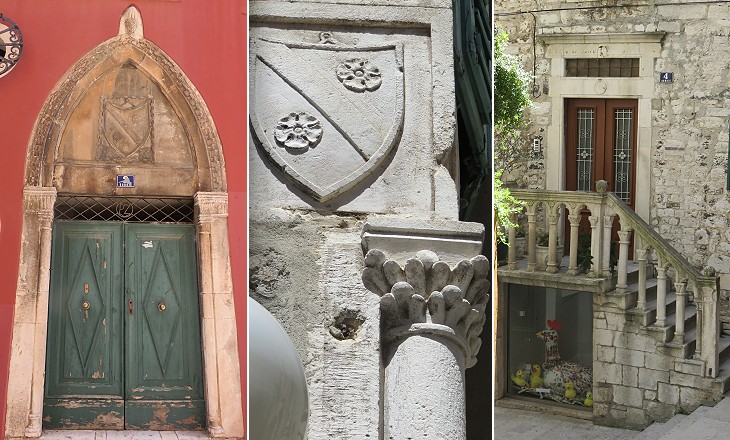 Other details of small palaces

The image used as background for this page shows a relief depicting a fish on a small lintel at Juraj Dalmatinka 14. It has a religious significance because it is accompanied by a Latin inscription meaning Come after me, and I shall make you to become fishers of men (Mat. 4:19).