- Traù - the Town
(a sphinx at Diocletian's Mausoleum) 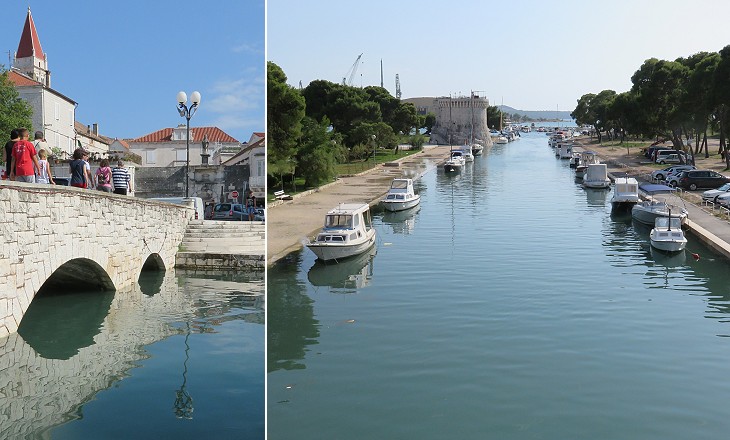 (left) Causeway leading to the town; (right) channel separating the island of Traù from the mainland

From Sebenico the steamer threads its way (..) until it turns towards the inland sea of Salona. The passage is interrupted at Traù, where the island of Bua comes so near the mainland that the channel is bridged over. Traù, however, is not on the mainland, but on a little island of its own, joined to the terra firma by a causeway and to the island by a swing bridge.
Sir Thomas Graham Jackson - Dalmatia, the Quarnero and Istria - 1887
Sir Thomas Graham Jackson (1835-1924) was one of the leading architects of his time. He visited Traù in 1885 and he wrote a very detailed account of its monuments, which today is very useful to identify the changes made in the XXth century. 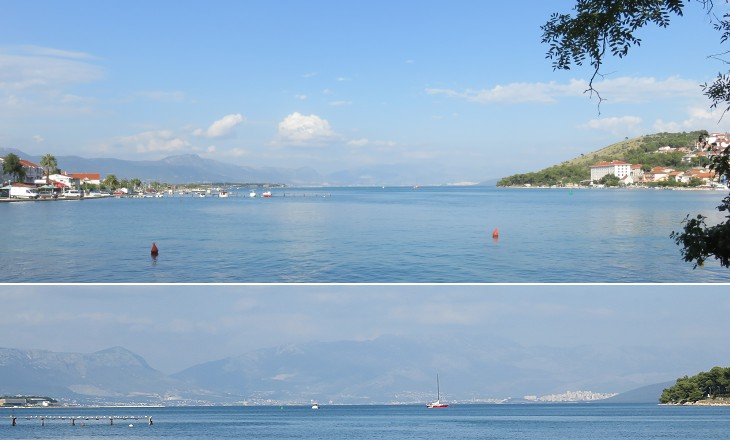 Views towards the inland sea of Salona. Modern Split (Spalato) is visible to the right in the lower image

The climate of Traù is remarkably mild, and here for the first time in our journey southwards we saw the date palm flourishing in the gardens, though I believe it has never been known to ripen its fruit. T. G. Jackson
The island of Bua protects Traù from sea gales whereas a mainland coastal range shelters it from bora, a strong and cold north-eastern wind. This mild climate attracts many foreigners every summer and the area around the historical town has more than 20,000 beds in hotels and private apartments. 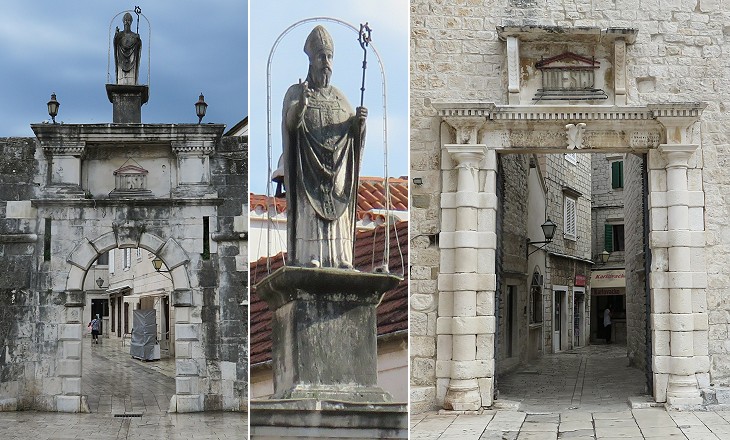 Opposite us was the Porta di terra firma, crowned by the statue of S. Giovanni Orsini, the patron saint of the city, and bearing over the gate the Lion of St. Mark, here as everywhere asserting the ancient sovereignty of the Queen of the Adriatic (i.e. Venice). T. G. Jackson
Traù was a small Comune (city-state) during the XIth-XIVth centuries; depending on circumstances its magistrates swore allegiance to the Kings of Hungary or to the Republic of Venice. Eventually in 1420 it was permanently acquired by the latter. 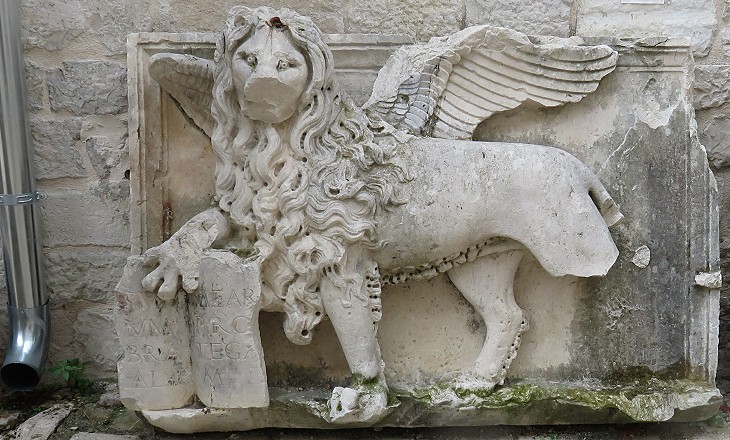 Lion of St. Mark (aka Winged Lion) which stood on one of the gates (it is now abandoned in a courtyard of Palazzo Garagnin Fanfogna). The inscription on the broken book is "Sub umbra alarum mearum protegam" (I will protect under the shadow of my wings)

The Lion of St. Mark was removed from all monuments of Traù after the town was assigned to Yugoslavia at the end of WWI, because it was seen as an Italian symbol. In 1997 UNESCO inscribed Traù in their World Heritage List. They could have recommended that the Lions (or copies) were placed back where they had been for centuries to show respect for the historical and artistic heritage of the town. 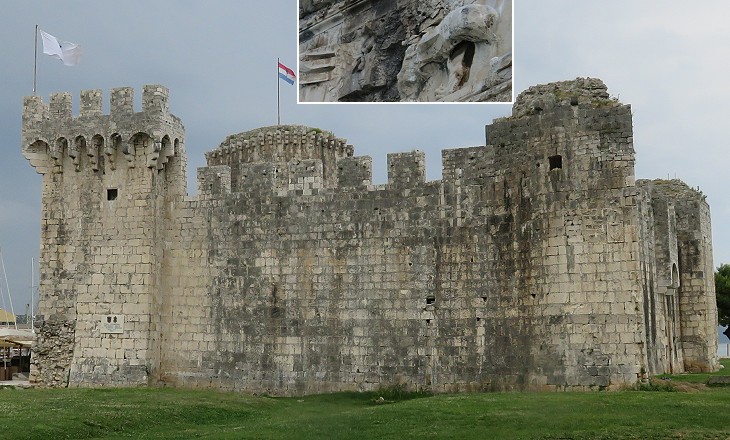 Although for the most part the city walls have been thrown down and cleared away there are some very striking remains of them at the northern end, towards the open sea. The grand Castel Camerlengo of 1424 forms an imposing feature of the view of the city when approached by sea from Sebenico. T. G. Jackson
In 1379 a Genoese fleet entered the Adriatic Sea and defeated the Venetian one near Pola. The Genoese conquered Chioggia, a town at the southern end of the lagoon of Venice. In June 1380 the Venetians recovered Chioggia after a long siege. In that same year another Genoese fleet sailed along the Dalmatian coast and occupied Traù and other towns. The Genoese built a tower at Traù which was eventually turned into a small fortress by the Venetians. "Camerlengo" was the title of a Venetian magistrate in charge of financial matters. Camerlengo Castle faced the island of Bua, whereas a round bastion controlled the small channel separating Traù from the mainland. Its design indicates it was built after the castle to which it was united by walls.
Iron chains were raised from these fortifications to the opposite shores of the channels of Traù to block enemy ships. 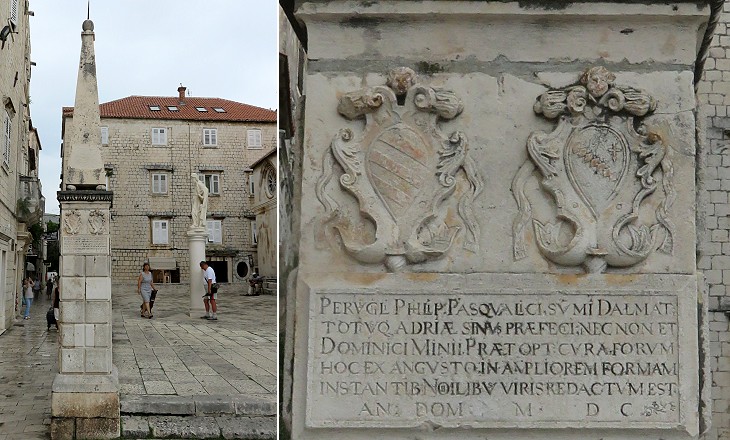 There is something very pleasing and significant in the centralization of the life of an ancient municipality in the agorà, forum, or piazza, round which the principal public buildings of the community were assembled, and in the adornment of which every citizen took a personal pride; and the piazza of Traù is not inferior in beauty or interest to any other in Dalmatia save perhaps that of Spalato. T. G. Jackson
The Cathedral is the most important monument of the main square and it is covered in a separate page. 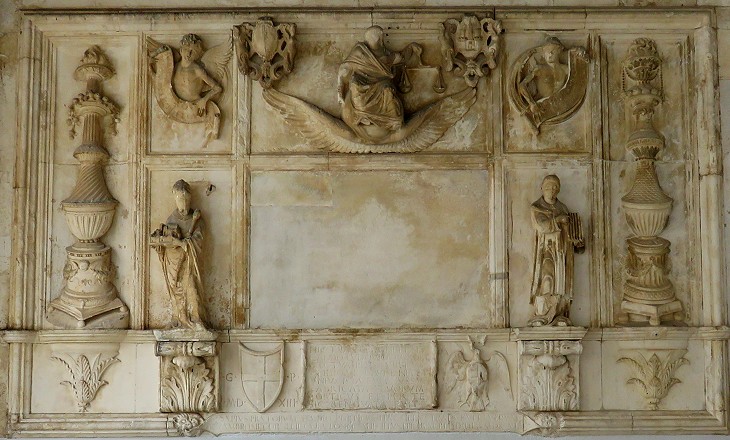 Relief by Niccolò Fiorentino in the Loggia (1471)

The wall is richly sculptured with a large Lion of St. Mark between S. Giov. Orsini and S. Lorenzo, while numerous escutcheons and inscriptions around record the various repairs and embellishments of the loggia by successive functionaries. The lion bears on his open book the legend INIUSTI PUNIENTUR ET SEMEN IMPIORUM PERIBIT (Psalm 37:28 - Wrongdoers will be completely destroyed; the offspring of the wicked will perish - King James Version). T. G. Jackson
The Lion, notwithstanding its artistic value, was destroyed in December 1932 during a period of very tense relations between the Kingdom of Italy and that of Yugoslavia (you may wish to see my attempt to place it back where it was, using a copy which was made to decorate the bridge across the Venice lagoon - it opens in another window). The usual inscription on the book held by the Lion was PAX TIBI MARCE EVANGELISTA MEUS (Peace to you Mark, my Evangelist), but in some instances it was modified. In this case the sentence reflected the fact that the Loggia was used as a tribunal.
The large relief is attributed to Niccolò Fiorentino, who is best known for having completed the Cathedral of Sebenico and for the chapel of Blessed Giovanni Orsini in that of Traù. He was born near Florence, but there are no sculptures or buildings attributed to him there. 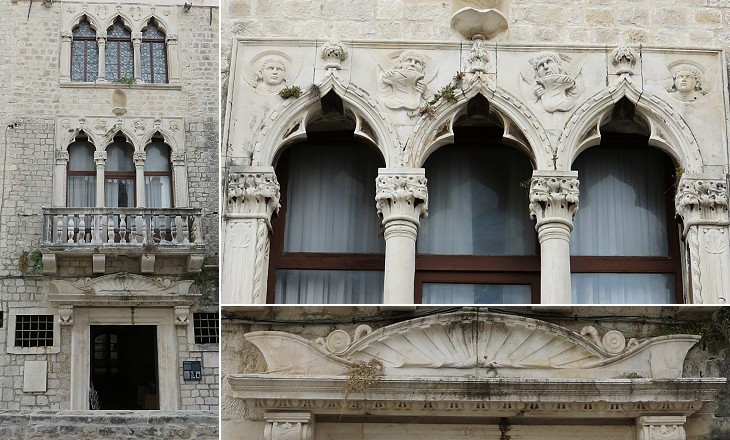 Palazzo Cippico (side on the main square)

On the west side of the piazza is the ancient palace of the Cippico family with windows and doors of Venetian Gothic, which are however on the verge of melting into the Renaissance style, being mixed with flat fluted niches.(..) Coriolano Cippico is one of her sons of whom Traù is justly proud. He was born in 1425, and studied at Venice and Padua. He not only served with distinction in the Venetian service against the Turks, but wrote the history of the campaign of Pietro Mocenigo in a style which made him no less famous as an author than he was already as a soldier. (..) In 1480 his house took fire and his second wife was burned to death. His own death took place in 1495. Several of his sons attained eminence in the church; Alvise was bishop of Famagosta and died in the same year as his father; Giovanni became archbishop of Zara in 1504; and another son, Girolamo, was archdeacon of Spalato. T. G. Jackson 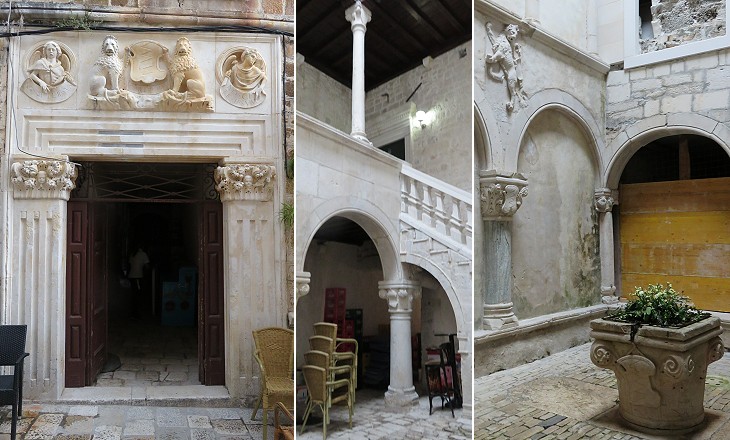 In the interior of the Cippico palace is a cortile with handsome details, and the family crest, a ramping lion, on the wall between each pair of arches. T. G. Jackson
The two angels hold inscriptions with the Latin saying Nosce te ipsum (Know thyself). The image used as background for this page shows a Winged Lion inside Palazzo Cippico. 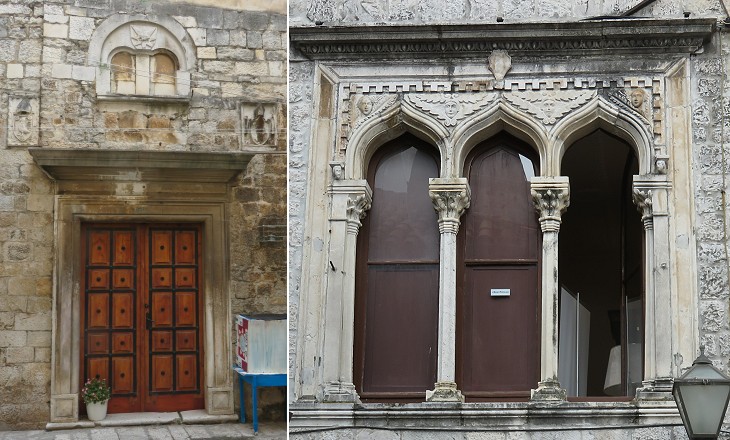 (left) Portal of a former religious building; (right) window near the Loggia

In every part of the town beautiful doorways and windows of Venetian architecture abound. (..) Some palaces are no longer inhabited by the original families, but are fallen into decay and divided into several smaller tenements. Traù can however still boast that she possesses representatives of her ancient Roman stock; the old Roman strain is said to have been maintained there with more purity than elsewhere in Dalmatia, and the Lucian, Celian and Statilian families trace their descent from the patrician houses of the Empire. T. G. Jackson
The name of the Roman town was Tragurium. At the time of his visit Jackson was told that Traù had a population of 3,000. Estimates related to the XVth century speak of 2,000, so it was never a big town, yet it had a number of small palaces having some artistic pretensions. 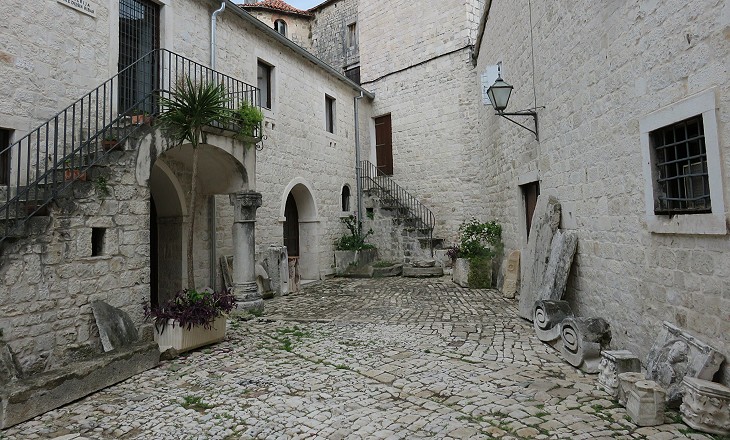 The same mixture of styles is observable in the fine palace of Count Fanfogna-Garagnin, the podestà (mayor) of Traù, to whom and to whose family we owe a debt of gratitude for many kindnesses during our visits to Traù, and much assistance in my researches into the local antiquities. T. G. Jackson
Domenico Garagnin held high positions during the French occupation of Dalmatia at the beginning of the XIXth century and he was made Knight of the Legion of Honour. Antonio Fanfogna married the last of the Garagnin and became mayor of Traù. Today the courtyard of his palace houses a haphazard display of capitals, stones, reliefs and other objects of different periods of the history of Traù. 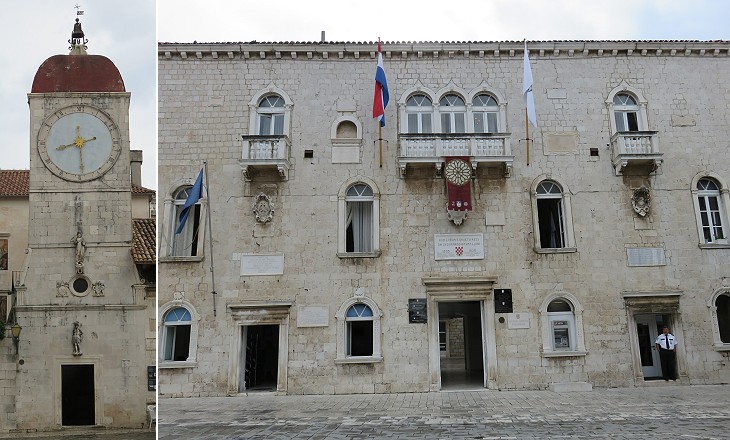 In 1813 the Austrians returned, since which time the history of Traù is silent. (..) The church of S. Sebastiano was recently raised and converted into the clock-tower. T. G. Jackson
The Austrian rule lasted until 1918 and during that period a large Town Hall was built together with a clock tower. The Austrian administration was a very effective one. It built schools, it promoted public health and it had fair taxation and judicial systems, but one would vainly look for the double-headed eagle of the Habsburgs at Traù and in general in Dalmatia. The same fate occurred to the symbols of the Kingdom of Yugoslavia (after WWII) and of the Socialist Federal Republic of Yugoslavia (after 1991).