- Caserta: the Gardens
(Royal Palace of Caserta in an XVIIIth century painting)

You may wish to see a page on the palace first.

Versailles: view of the Latona Fountain and of the Grand Canal (January 7, 2014)

The gardens are very extensive, but when finished according to the original plan, will resemble the formal insipid scenes of Le Notre (at Versailles), with wide sultry alleys, and crowded rows of statues.
Henry Swinburne - Travels in the Two Sicilies. 1777-1780 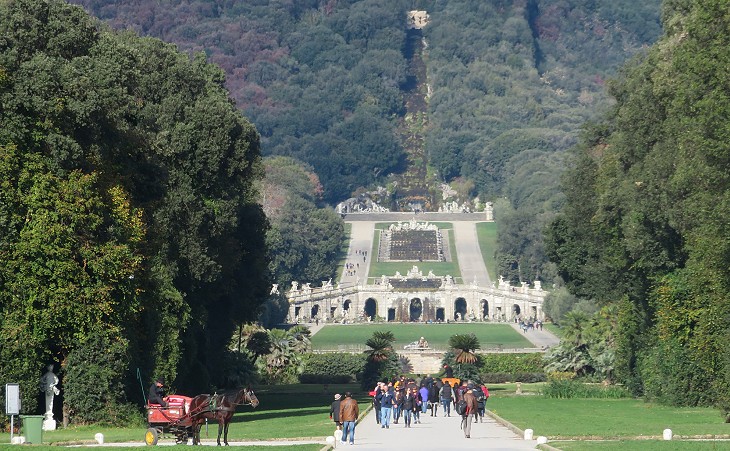 A broad canal is to be cut from the garden to the hills, and there to receive, by an artificial cascade, the waters that are brought at a great expense to supply the palace; Vanvitelli, whose ideas were of the sublime kind, traced up to their sources, the streams that in ancient times were conveyed to Capua, and found them among the mountains, nine miles from Caserta; he then confined them to one regular channel, and led them by an easy fall along the sinuosities of several valleys, till the depth of one hollow, and the height of the opposite ridge of hills, made it necessary to build an aqueduct across for their conveyance. A less expensive mode might perhaps have been devised, but it was the wish both of the sovereign (Charles of Bourbon) and his architect to raise a monument that should transmit their names to posterity with honour. Swinburne 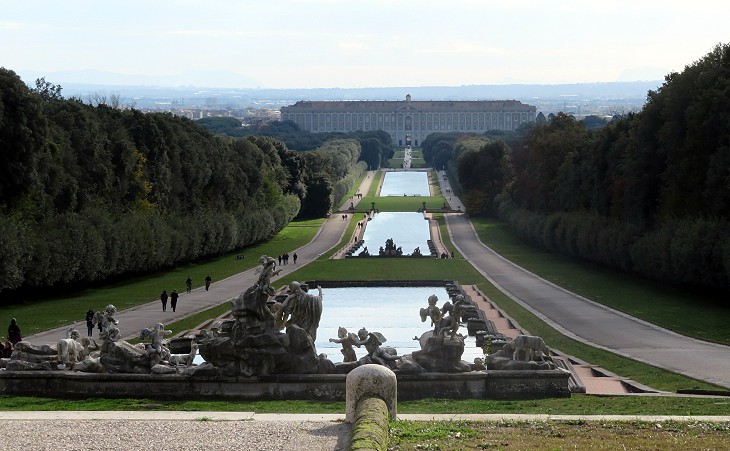 Saturday Sept 25, 1790. I quit Naples in the morning and after dining at Caserta visited the royal villa at Belvedere otherwise called St Lucia where the king has established a little colony and sundry manufactories of silks. The situation of this villa is truly pleasant and commands an extensive view of the Campagna Felice in the midst of which the royal palace raises its grand and majestic form.
Sir Richard Colt Hoare - A Classical Tour through Italy and Sicily - Published in 1819 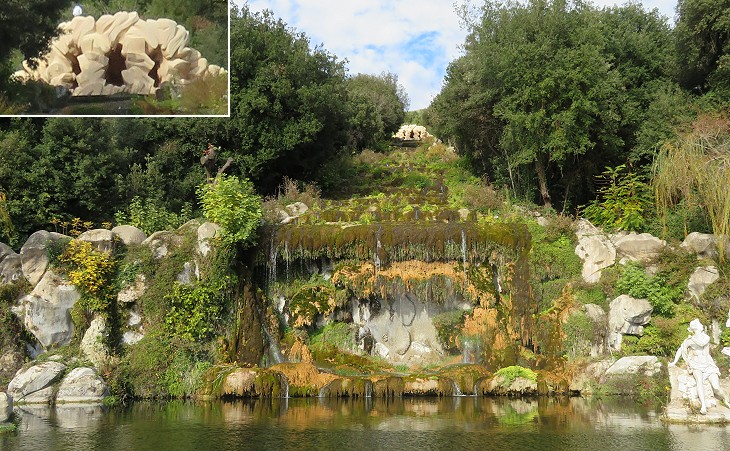 Waterfall which empties into the Fountain of Diana and Actaeon; (inset) artificial rocks at its top

Caserta, Wednesday, March 14, 1787. The site is uncommonly fine on one of the most fertile plains in the world, and yet the gardens trench on the mountains. From these an aqueduct brings down an entire river, to supply water to the palace and the district; and the whole can, on occasion, be thrown on some artificially-arranged rocks, to form a most glorious cascade. The gardens are beautifully laid out, and suit well with a district which itself is thought a garden.
Johann Wolfgang von Goethe - Italian Journey - translation by Charles Nisbet 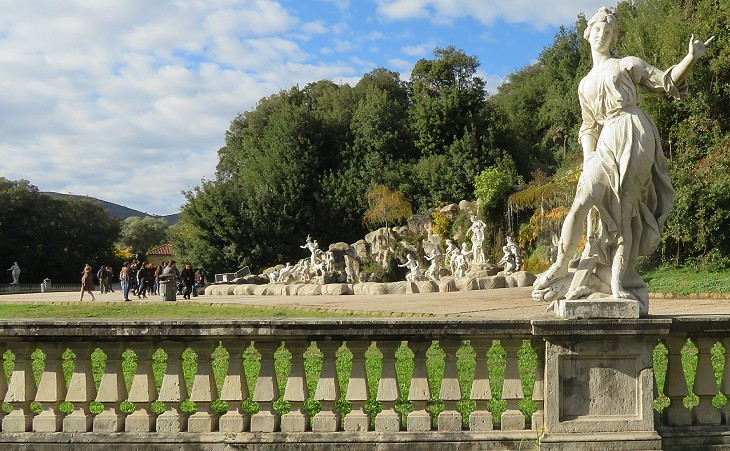 Terrace of the Fountain of Diana and Actaeon

Vanvitelli's design of the formal gardens calls to mind those at Versailles and at La Granja de San Ildefonso, the Spanish countryside residence which King Charles was very familiar with. It is however indebted also to Teatro delle Acque, a series of waterfalls which decorated the gardens of the villas in the environs of Rome, e.g. at Villa d'Este in Tivoli and Villa Torlonia in Frascati, the origins of which can be traced back to the ancient Roman monumental fountains, e.g. the "Temple of Waters" at Ziqua in Tunisia. 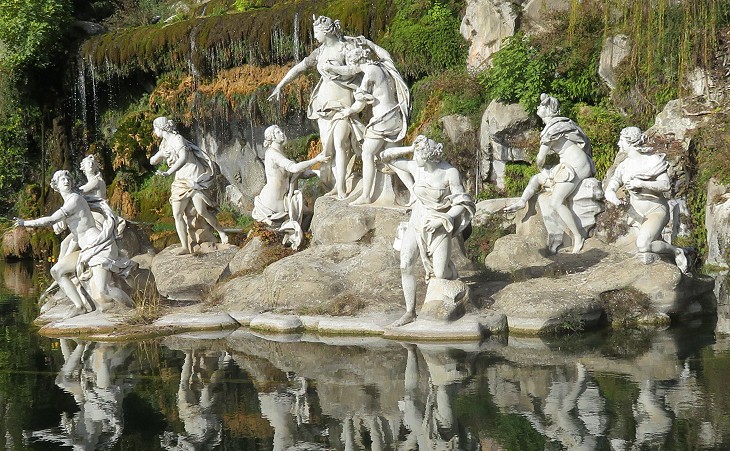 King Louis XIV wanted to be metaphorically associated with the Sun and therefore with the Greek god Apollo. At Versailles the decoration of the palace and of the gardens had references to Apollo, but in the gardens some statues depicted scenes related to hunt (e.g. the myth of Actaeon), the great passion of Louis together with dance. This subject was present also at La Granja and Charles, with the help of Vanvitelli, made it predominant at Caserta. Hunting was very popular also among the German Electors, e.g. at Nymphenburg and Bruhl. 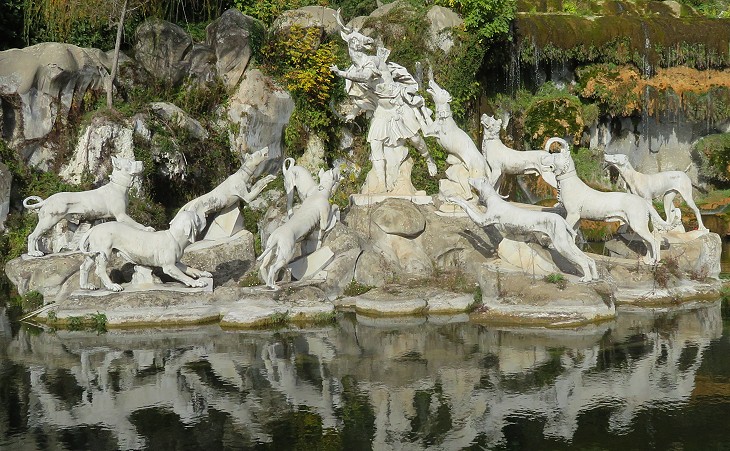 Actaeon, the hunter turned into a stag by Diana, is pursued by his own hounds

From shouting men, and horns, and dogs he flies, / Deafen'd and stunn'd with their promiscuous cries. / When now the fleetest of the pack, that prest / Close at his heels, and sprung before the rest, / Had fasten'd on him, straight another pair, / Hung on his wounded haunch, and held him there, / 'Till all the pack came up, and ev'ry hound / Tore the sad huntsman grov'ling on the ground.
Ovid - Metamorphoses - Book III - translation by Sir Samuel Garth, John Dryden, et al
The fountain was made in 1773 by a team of sculptors who followed the design by Vanvitelli, unlike other statues of the gardens which were made at a later time. 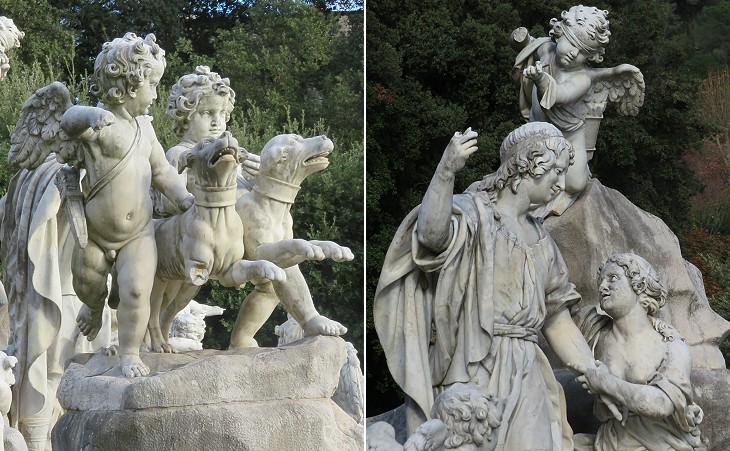 Another large fountain was dedicated to an ill-fated hunter. Cupid accidentally pricked his mother, Venus, with one of his arrows, and she fell in love with mortal Adonis. The beautiful young man was begged by the goddess not to go hunting because she knew he would have been killed by a boar.

"Sweet boy," she says, "this night I'll waste in sorrow,
For my sick heart commands mine eyes to watch.
Tell me, love's master, shall we meet tomorrow
Say, shall we? shall we? wilt thou make the match?"
He tells her no, tomorrow he intends
To hunt the boar with certain of his friends.
"The boar!" quoth she; whereat a sudden pale,
Like lawn being spread upon the blushing rose,
Usurps her cheek, she trembles at his tale.

William Shakespeare - Venus and Adonis - vv. 583-591 - based on Ovid's account.
The execution of the statues by Gaetano Salomone in 1784-1789 shows the new academic patterns which began to prevail at the end of the XVIIIth century. For this fountain Carrara marble was used to make possible a very elaborate depiction of all details. 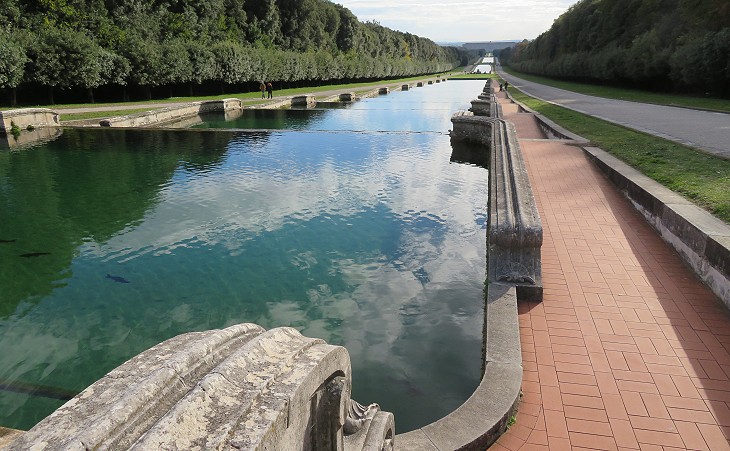 Vanvitelli designed a series of fish ponds along the slope leading to the palace; according to his words the largest one was meant for i giochi del Re e per la pesca for allowing Ferdinand, the young king to practice as naval military commander and as angler. When the pond was completed in 1769 the king was eighteen-years-old. The ponds were populated with fish from nearby rivers and lakes. Fish ponds were part of the decoration of Villa d'Este and a facility of some ancient Roman villas (e.g. at Formia). 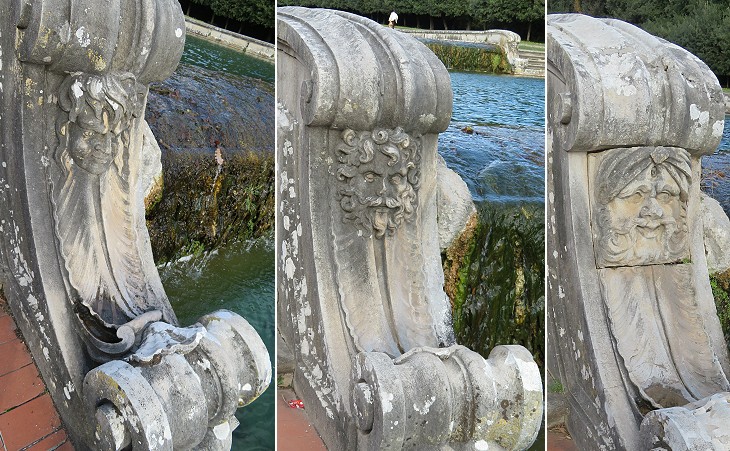 Decorations of the balustrades along the fish ponds. The image used as background for this page shows another of them depicting the head of a hound

The balustrades along the fish ponds were decorated with a variety of subjects. The head of an Ottoman bearded man is perhaps a reference to a captured corsair. In 1738 King Charles feared for his life when the small ship on board of which he was returning to Naples after hunting on the island of Procida was attacked by Algerian corsairs. He eventually took action in order to retaliate and his ships captured a number of corsairs who were employed in the construction of Caserta and even in assisting in the restoration of statues found at Herculaneum. 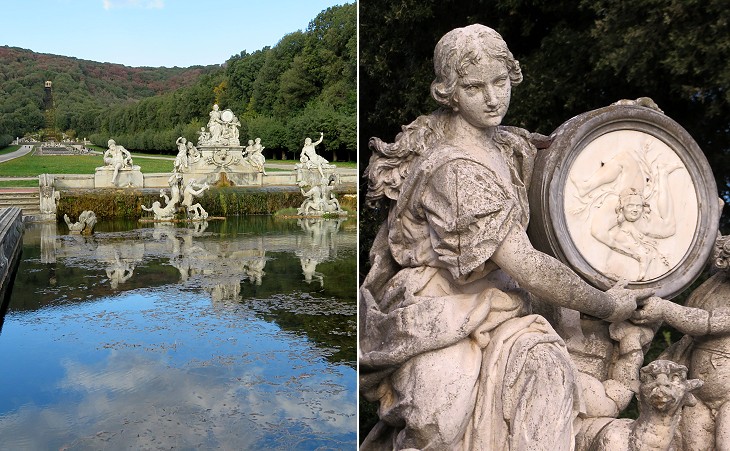 Fountain of Ceres, goddess of Agriculture, and detail showing her holding the symbol of Sicily

The statue of Ceres is one of the very few references to Sicily which can be seen at Caserta. For centuries the Kingdom of Naples and that of Sicily had the same Spanish king, who appointed viceroys to actually rule them: one in Naples and one in Palermo. When Charles of Bourbon became king he was Charles V in Palermo and Charles VII in Naples, but he definitely had a predilection for Naples as the decision itself to build the Palace of Caserta shows. He appointed viceroys to rule Sicily. In 1816 his son Ferdinand formally unified the two kingdoms into the Kingdom of the Two Sicilies, but Sicily was ruled by a lieutenant general. By being too "Neapolitan" the Bourbon kings lost the sympathies of their Sicilian subjects, thus favouring uprisings (as at Messina in 1848) and eventually the conquest of the island by Giuseppe Garibaldi in 1860.

Saturday, Oct 9, 1790. I again left Naples and having paid another visit to the ruins of the ancient Capua proceeded to Caserta. Here I dined and in the evening walked up to the royal garden which has been laid out in the English style. Colt Hoare
The English Garden was designed in the late XVIIIth century by John Graeffer for Queen Maria Carolina. In line with the fashion of the time a number of "follies" decorated it and copies of ancient statues and reliefs were placed here and there. 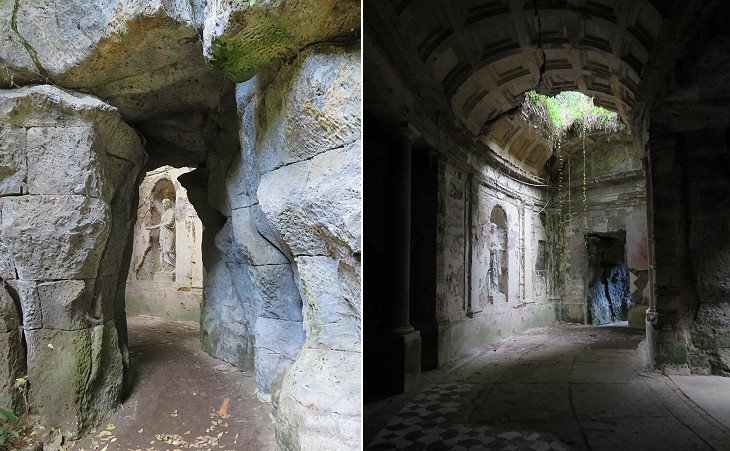 The archaeological excavations which Charles promoted at Pompeii and Herculaneum created a wide interest for the ancient ruins themselves, in addition to leading to the discovery of many works of art. The casual finding of statues in an ancient building was recreated in the English Garden. The collapsing roof was designed having in mind that which could be seen in the "Villa of Cicero" at Formia. 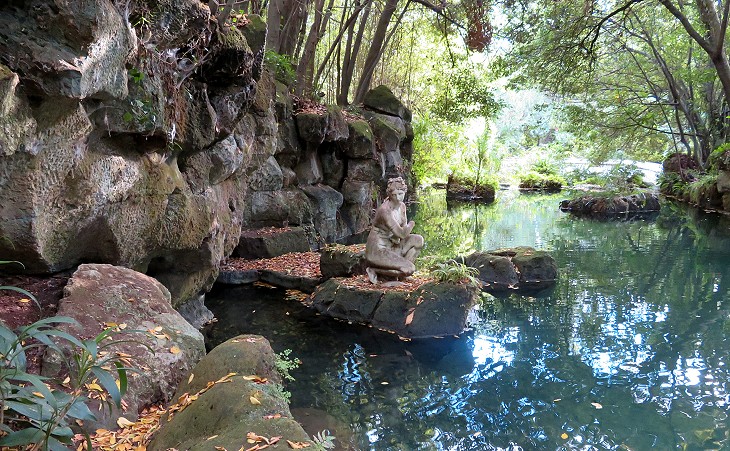 English Garden: Venus at her bath

The statue was made in 1762 by Tommaso Solari and it was meant to decorate the formal gardens. It was eventually moved to the English Garden to create another surprise for the guests of the Queen to whom it was "sold" as an ancient statue of the Farnese Collection. 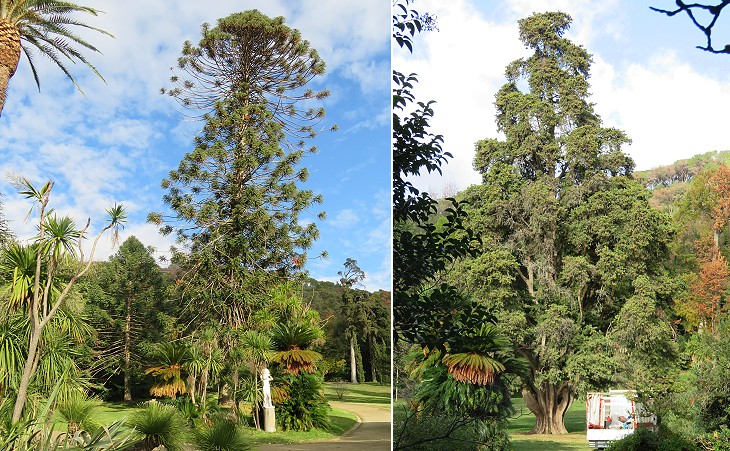 The Gardens (open to the public till Ave Maria), which trench upon the mountains, are of three kinds, the Italian garden with its waterfalls and mythological statues; the wood of the ancient Dukes of Caserta, which was the feudal park; and the English garden of Queen Caroline with its greenhouses and magnolias.
Augustus J. C. Hare - Cities of Southern Italy and Sicily - 1891
In the XIXth century the English Garden became the Royal Botanic Garden and some exotic trees and shrubs were added.

Return to the palace or move to:
Royal Palace of La Granja de San Ildefonso
Palaces of the German Archbishops-Electors
Schloss Nymphenburg near Munich
Belvedere Palace in Vienna