Welcome to this Sunday stroll in San Saba.

Rome was built on seven hills, starting with the Palatine. The legend says it was founded by Romulus, but why by him and not by his twin brother Remus?
To sort out whom of the two should give his name to the new town (Roma after Romulus or Remuria after Remus) the priests decided the twins should look for a sign in the sky. So Romulus went on top of the Palatine and Remus on top of the Aventine, a nearby hill, to watch for crows. It is the first recorded case of birdwatching in the history of mankind.
Romulus had better eyesight (or Jupiter preferred him) and so he was designated to be the founder of the new town which took his name and his house on the Palatine originated the word palace.
Poor Remus did not take it well: he crossed the furrow which indicated the area of Rome and Romulus killed him.
Later on Rome expanded on six other hills including the Aventine. This hill is made of two peaks, the Aventine close to the river and the Little Aventine or San Saba (after the church) in the interior. Walls were erected during the republican period and in the map drawn by Rodolfo Lanciani at the end of the XIXth century you can see them crossing the two peaks (in the map black means Roman Rome and red means Christian Rome).
Let's start our stroll from this little square with cypresses. It is Piazza Remuria the spot where Remus was looking for crows and possibly the initial site of his town. 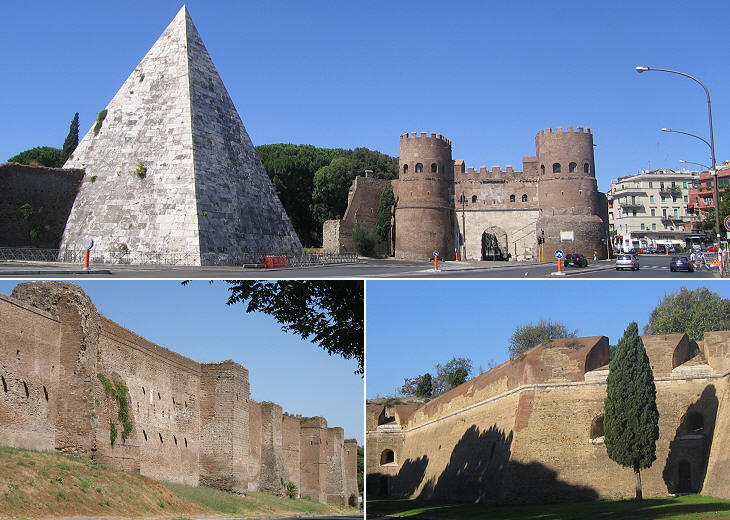 Let's now look at the walls, which protect San Saba from the modern barbarians, i.e. the cars. In the year 275 AD Emperor Aurelian built new walls to protect Rome. On the Aventine they were very close to the old ones. The Romans used to build burial monuments along the roads immediately outside the walls: Caius Cestius a very rich man wanted for himself a pyramid and Aurelian a few centuries later incorporated it in the new wall. The gate (Ostiense or S. Paolo) was enlarged into a small castle in medieval times. The walls were fortified with many towers. In the XVIth century Pope Paul III decided to upgrade the walls to new military architecture and asked Antonio da Sangallo the Younger to make a pilot in San Saba. In 1833 evidence of a Roman villa with a stunning floor mosaic was found near this bastion.

The View over Terme di Caracalla

The northern flank of San Saba has a commanding view over the ruins of Terme di Caracalla (where one can enjoy the Roman sunshine) and beyond them over the gigantic statues of S. Giovanni in Laterano. 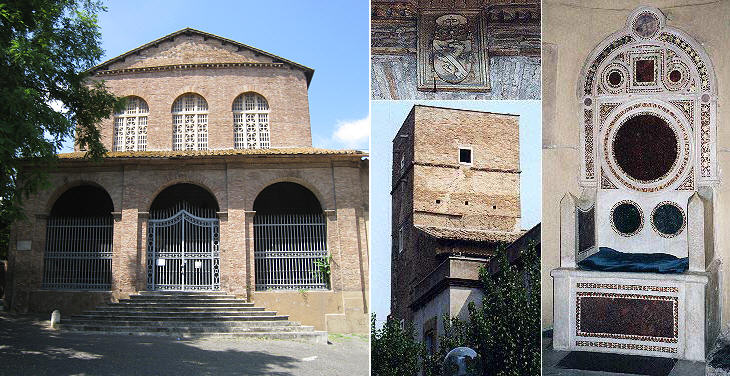 After the fall of the Roman Empire San Saba was nearly completely abandoned. Only two medieval churches were founded using part of existing buildings. Santa Balbina had also a monastery attached to it in the form of a little fortress with a tall tower which commands a fine view. The street leading to S. Balbina is one of the few Silent Streets of Rome.

S. Saba is the parish church. Every May a procession starts from it and goes through the streets of the quarter. It may not be as popular as Trastevere's Festa de Noantri, but the locals like it. 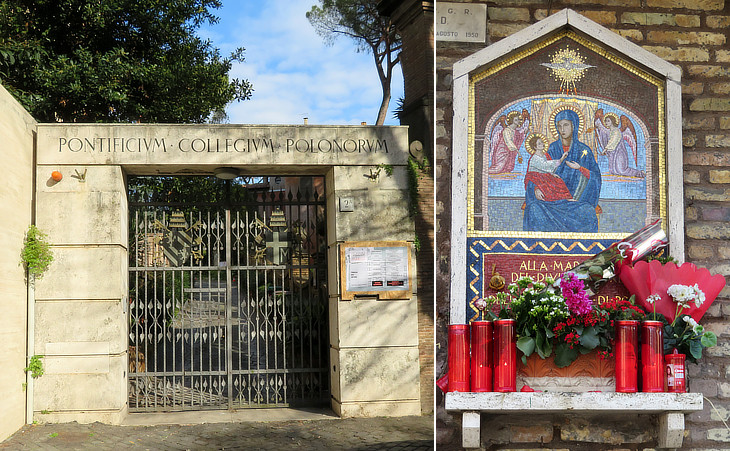 (left) Pontifical Polish College in Piazza Remuria with the coats of arms of Popes Pius IX (left) who founded it in 1866 and of Pope John Paul II (right) who stayed there when he visited Rome as a cardinal; (right) altar to Madonna del Divino Amore outside the church

The religious character of the quarter is increased by the presence of several pontifical colleges. 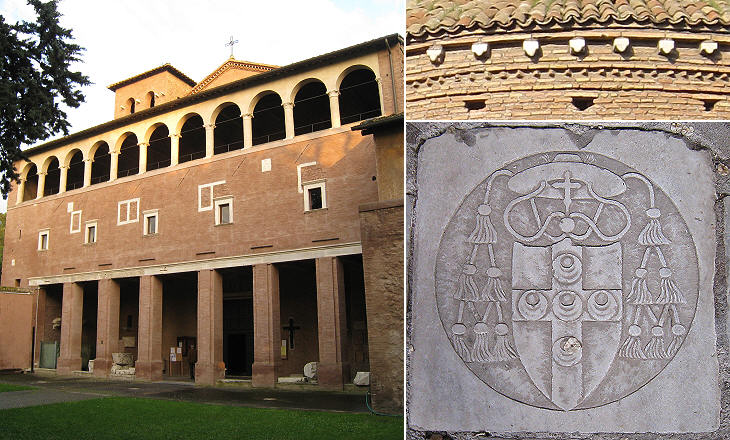 S. Saba is a very old church, but it was largely resored in 1465 by Cardinal Enea Silvio Piccolomini who became Pope Pius II. The apse shows a simple brick decoration which inspired...... 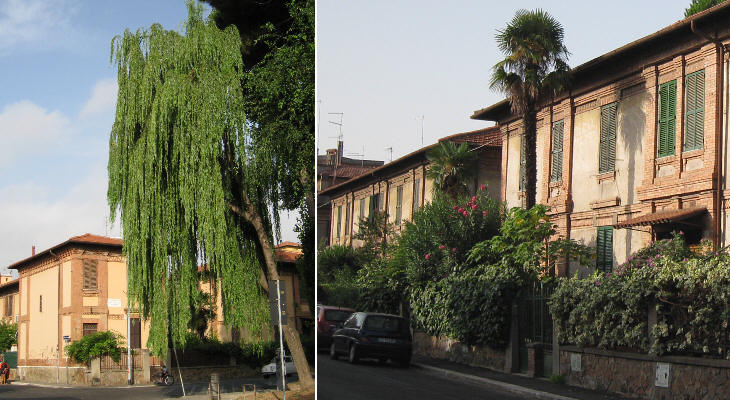 In 1909 the hill of San Saba was chosen for a new development. The plan, unlike many other developments in Rome, called for small houses rather than large buildings. 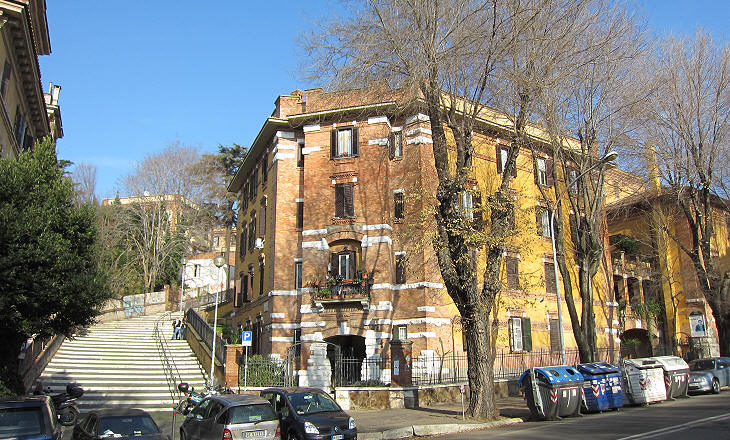 A larger building and Via Francesco Borromini

They were intended to house poor people, but they were built with grace and inspiration. The new streets were named after Baroque artists so the main square is dedicated to Gian Lorenzo Bernini, who was luckier than his rival Francesco Borromini who was relegated to the steps you see in the photo.

In the 1930s other houses were built at the foot of the hill. Some of them have no pretensions, but a few show the hand of a good architect. 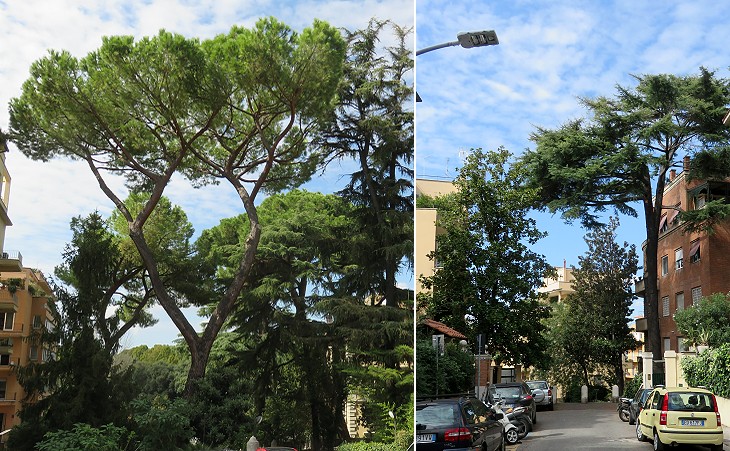