S. Giorgio al Velabro
(Vasi at work in the Grand View of Rome)

Links to this page can be found in Book 3, Map C3, Day 5, View C9, Rione Ripa and Rione Campitelli. 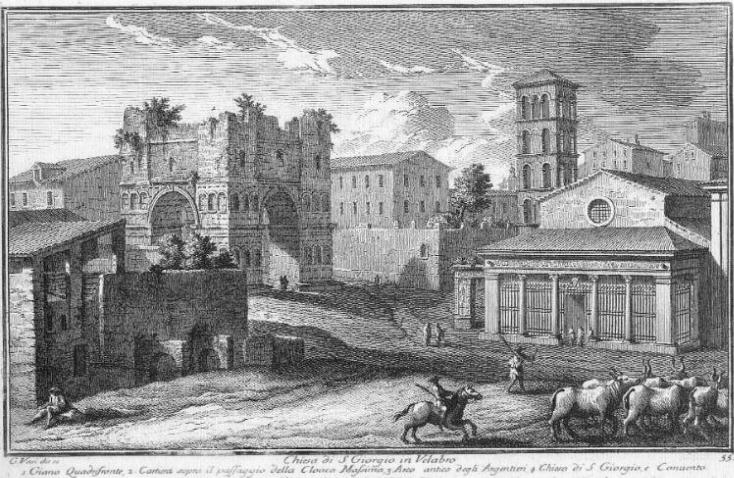 Velabro, the area along the river at the foot of the Palatine Hill was marshy until the ancient Romans developed a system of drains which carried off rainwater to the Tiber via Cloaca Massima, a large sewer. After the fall of the Roman Empire the drains were no longer maintained and eventually a small stream which crossed Circus Maximus was channelled through Cloaca Massima. In 1753 when Giuseppe Vasi published this etching its flow was used by a paper mill which is shown in the left side of the plate. The cows and oxen in the lower right corner of the plate came from nearby Campo Vaccino, the weekly cattle market on the site of the ancient Roman Forum.
The view is taken from the green dot in the small map below. In the description below the plate Vasi made reference to: 1) Arco di Giano Quadrifronte; 2) Paper mill above Cloaca Massima; 3) Arco degli Argentieri; 4) S. Giorgio al Velabro. The small 1748 map shows also: 5) S. Eligio dei Fabbri; 6) S. Giovanni Decollato; 7) S. Anastasia. The dotted line in the small map delineates the border between Rione Ripa (left) and Rione Campitelli (right). (left) Arco di Giano Quadrifronte and S. Giorgio al Velabro; (right) ancient arches above Cloaca Massima (the path leads to a point of access to the last section of the sewer)

In 1830 the upper part of Arco di Giano Quadrifronte was pulled down because it was assumed to be a medieval addition to the Roman arch. It was instead the attic of the monument which had entirely lost its marble facing.
Arco degli Argentieri is hidden by the church. The paper mill has been replaced by two modern buildings, between which some ancient arches above Cloaca Massima can be seen. 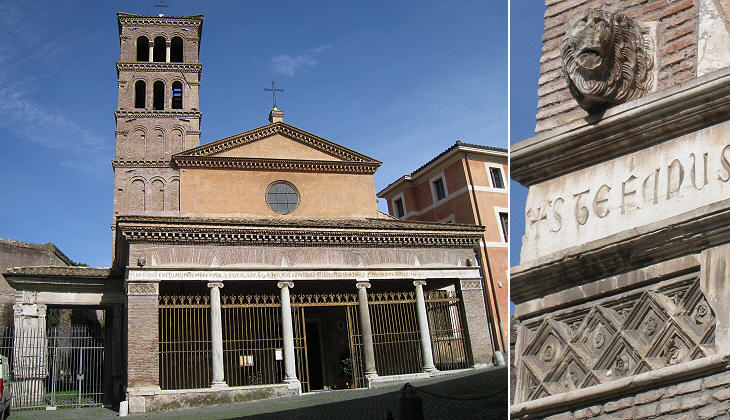 The church was built in the late VIIth century, during the Byzantine administration of Rome, similar to many other churches in the area, including S. Maria in Cosmedin. The dedication to St. George replaced a previous one to St. Sebastian; both were soldier saints, but the former was the patron of the small Byzantine garrison of Rome.
The portico was built in the IXth century and it was redesigned at the beginning of the XIIth century. In 1993 it was almost wiped out by a car bomb (it opens in another window), a terrorist act by a Sicilian mafia ring, but it has been rebuilt as it was. 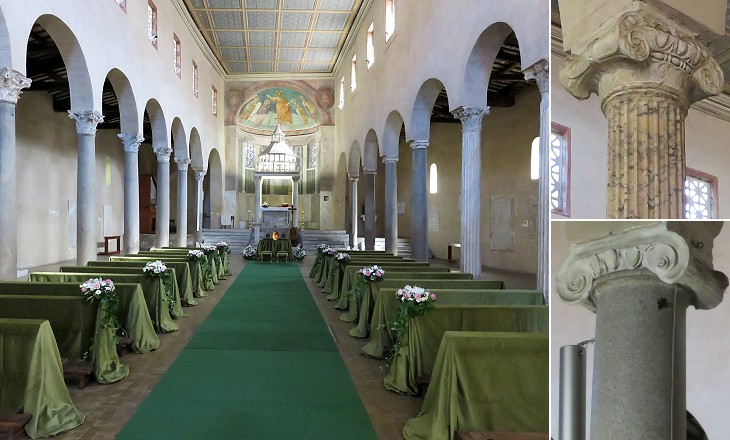 In the 1920s all the side altars and other mainly XIXth century additions were removed in order to reveal the original design of the church which was based on fine columns taken from ancient monuments. Their shafts are of yellowish pavonazzetto and grey granite. These stones, unlike white marbles, could not be burned to make mortar.
You may wish to see the church as it appeared in a 1588 Guide to Rome. 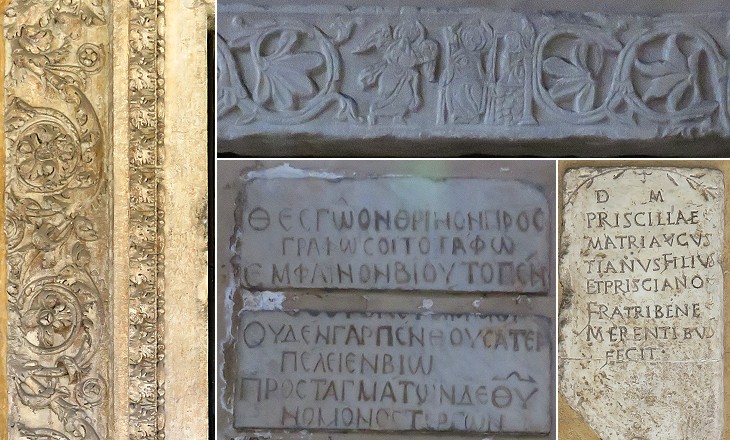 Fragments of decorations and inscriptions on the wall of the portico and in the interior, including a relief with a scene depicting the Annunciation to Zacharias 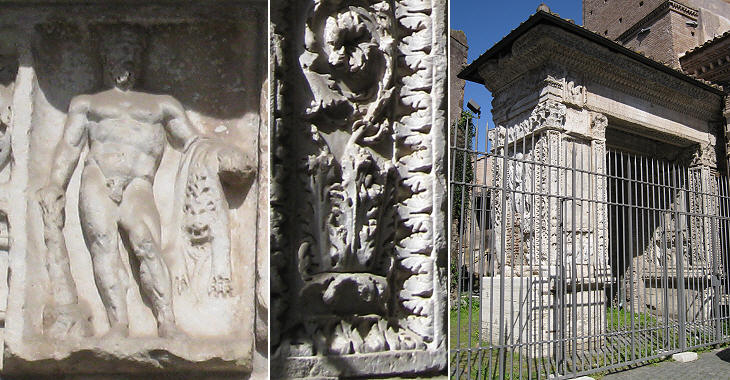 This small arch was erected in 204 by argentarii (money-changers) and cattle dealers in honour of Emperor Septimius Severus: the decoration and the inscriptions made reference to that emperor and his two sons: Caracalla and Geta. After Caracalla murdered Geta all references to the latter were deleted. The relief portraying Hercules is due to the traditional account which sets one of his labours in this part of Rome, where a temple to him still exists (it was turned into a church). 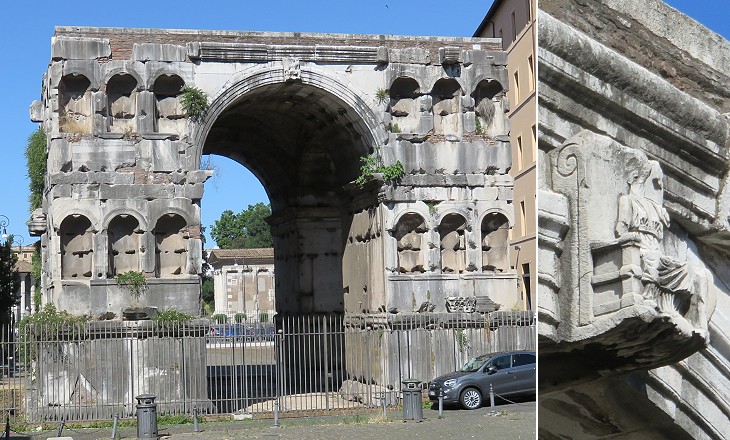 (left) Arco di Giano (eastern side) and behind it Tempio di Portuno; (right) small statue of Rome or Juno on the arch keystone

The arch has different names and it was likely built at the time of Emperor Constantine or of Maxentius, Constantine's rival. Giano (Lat. Janus) was the god of the passages (Lat. ianua means door and January marks the passage to the new year): the arch dedicated to him had four fronts (It. quadrifronte) instead of two. The main purpose of the arch was to shelter the dealers who used to meet in this commercial part of the city. Its design is similar to arches at Malborghetto and at Tripoli in Libya. 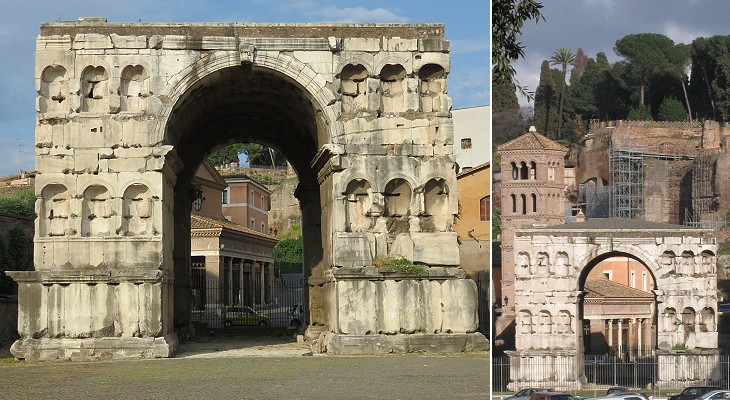 (left) Arco di Giano (western side); (right) the arch with the Palatine in the background

The marble niches (one of them can be seen in the image used as background for this page) housed statues of gods. They were short-lived, because in 392 Emperor Theodosius declared the Christian faith the sole religion of the Roman Empire.
You may wish to see the arch in the moonlight. 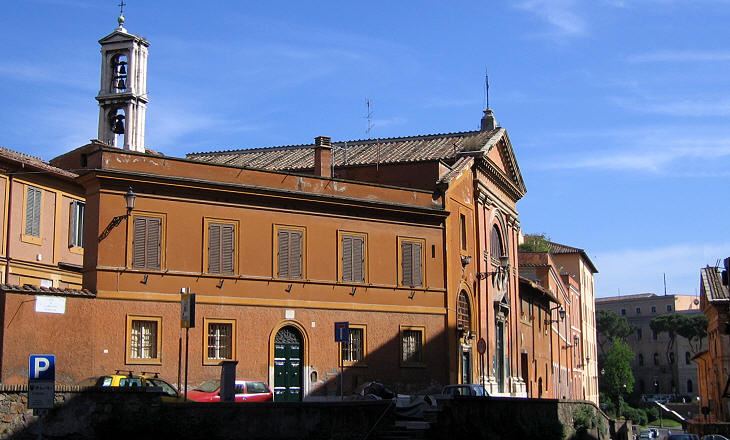 The complex of S. Eligio dei Fabbri opposite S. Giovanni Decollato (far right in the photo)

St. Eligius was a talented goldsmith and therefore he is the patron saint of goldsmiths. Because he cut a horse's leg, shod its hoof and subsequently re-attached it, he is the patron saint also of those who work with horses and iron. For this reason three Roman guilds (goldsmiths, farriers and blacksmiths) dedicated a church to him: S. Eligio degli Orefici (goldsmiths) near Via Giulia, S. Eligio dei Sellai (farriers) in Trastevere (the church was pulled down at the beginning of the XXth century) and S. Eligio dei Fabbri (blacksmiths) which is covered in this page. 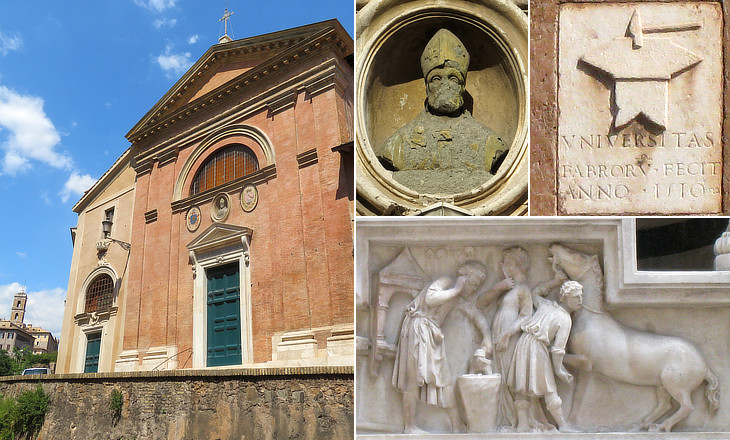 (left) S. Eligio dei Fabbri and to the very left the tower of Palazzo Senatorio; (right-above) bust of St. Eligius and grill decorated with the symbol of the guild; (right-below) detail of the relief depicting the legendary account of the horseshoe below the statue of St. Eligius by Nanni di Banco at Orsanmichele in Florence (it opens in another window)

The church is in the valley between the Palatine and the Capitoline hills. It was built in 1562 and it still belongs to the brotherhood of the guild (see their website - it opens in another window). 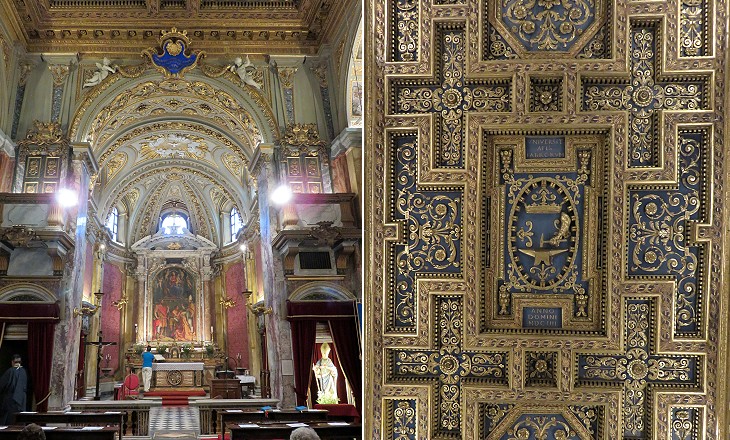 The churches of the Roman guilds were usually rather small in size, but they were lavishly decorated. This occurred over a long period of time because the guilds could not rely on wealthy patrons, e.g. cardinals or noble families, to take care of the cost of embellishments. The interior of S. Eligio dei Fabbri was decorated over a period of nearly two centuries. The guild included also grinders, tinkers, locksmiths, gunsmiths and other trades. Each of the trades represented by the guild had to decorate a chapel. Even the garzoni, the wage earners, were asked to donate a painting or a statue.
You may wish to see a directory of churches belonging to a guild. 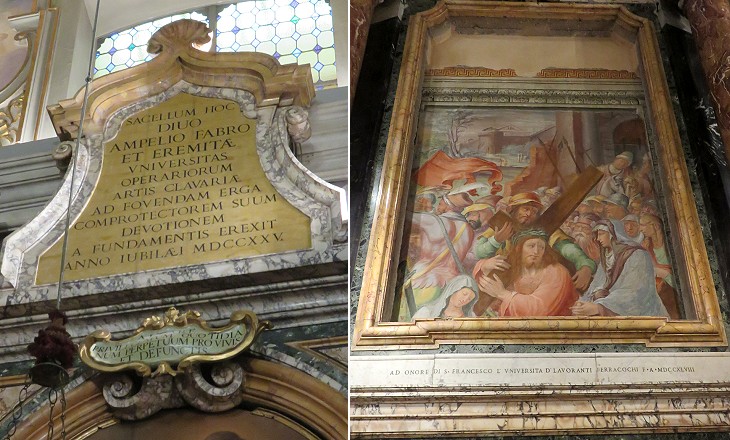 (left) 1725 decoration of Cappella di S. Ampelio. Ampelius, a IVth century hermit who chased the Devil by brandishing a hot iron, was chosen as patron saint by the Chiavari (locksmiths), because he protected them from burns; (right) altarpiece (mid XVIIth century) in Cappella di S. Francesco which belonged to the Ferracocchi, the makers of the metal parts of carriages 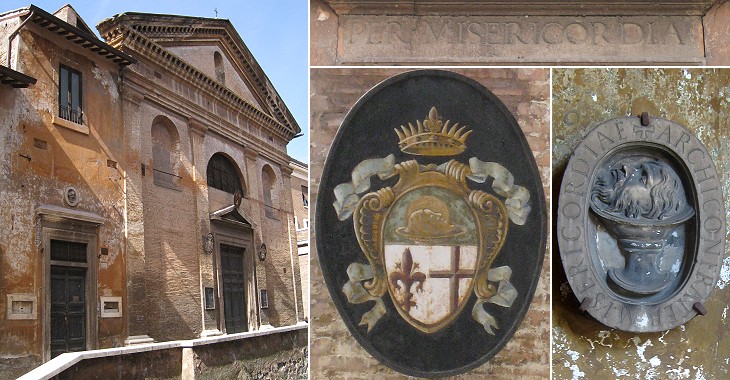 (left) Façade; (upper right corner) inscription on the side of the church; (centre) coat of arms of the brotherhood; (right) relief with the head of St. John the Baptist surrounded by the inscription "Misericordiae Archiconfrater(nitas)"

In Florence when you need an ambulance, you do not call the Red Cross, you call "La Misericordia" (from Lat. miserere, pity and cor, cordis, heart), a brotherhood for helping the sick. It was founded in the XIIIth century and its members wore the traditional hooded uniform until 2006. In 1490 the Florentines living in Rome created their own local Misericordia which was named after St. John the Baptist, the patron saint of Florence.
Pope Innocent VIII gave the brotherhood a piece of land where a church and an oratory were built during the first half of the XVIth century (you may wish to see the building as it appeared in a 1588 Guide to Rome). 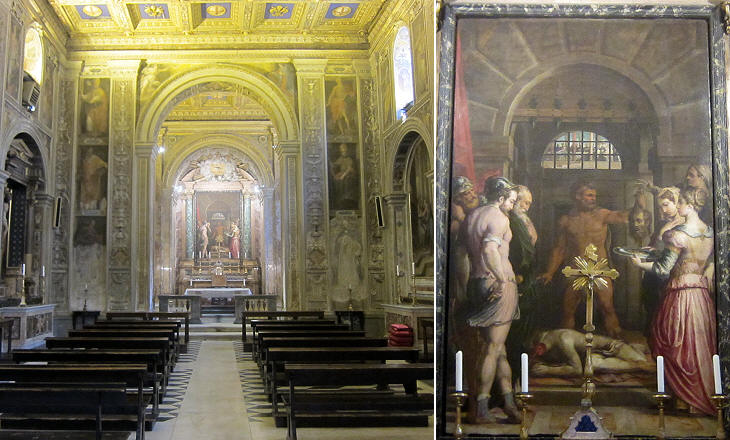 The interior of the church has a rich decoration and paintings by Giorgio Vasari and other Florentine mannerist artists. The members of the brotherhood comforted those who were sentenced to death during their last hours and in 1540 Pope Paul III granted the brotherhood the yearly right to free one of them.
After a short delay, some monks were seen approaching to the scaffold from this church; and above their heads, coming on slowly and gloomily, the effigy of Christ upon the cross, canopied with black. This was carried round the foot of the scaffold, to the front, and turned towards the criminal, that he might see it to the last.
Read more of Charles Dickens's account of an execution near this church in 1845. 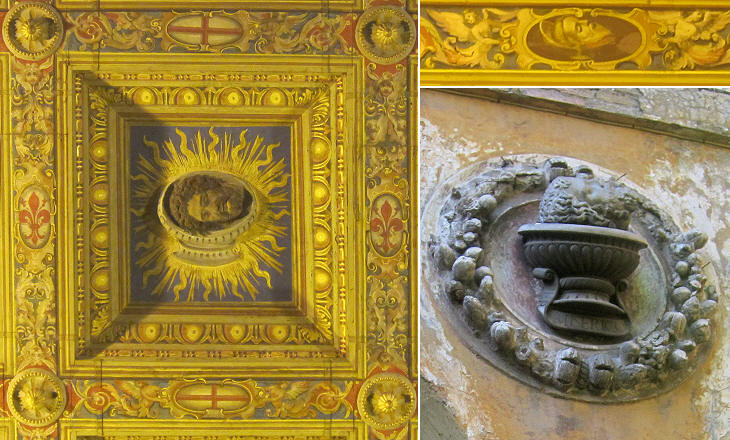 St. John's head on a platter was the symbol of the brotherhood and it is a recurring theme of the decoration of the church; the emphasis placed on this gruesome reference to the saint was in line with the guidelines developed by the Roman Catholic Church at the Council of Trento which promoted the portrayal of the martyrs and in particular of the tortures they endured and the ways they were put to death. 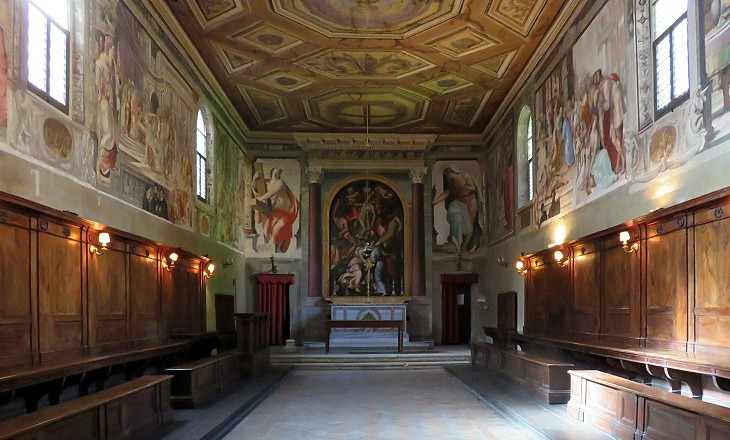 The complex includes an oratory where the members of the brotherhood held their meetings. It is decorated with frescoes by Florentine painters who joined the brotherhood. The church and the oratory can be visited only on June 24, feast of St. John the Baptist.
You may wish to see a directory of national churches in Rome. 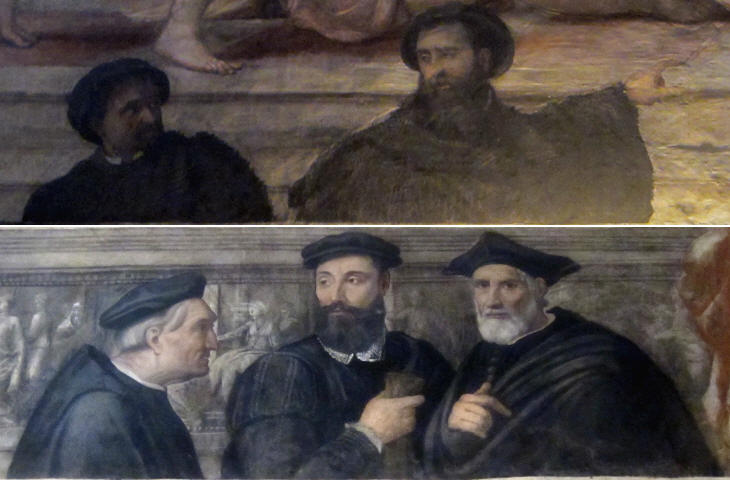 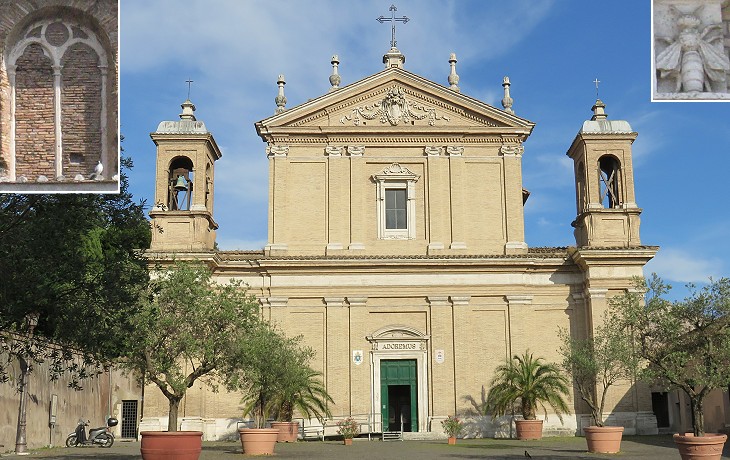 S. Anastasia is one of the oldest churches of Rome; it is dated IVth century, although its current appearance is the result of several reconstructions; during the Byzantine administration it was the church of the governors of the City. Major modifications were made by Pope Sixtus IV for the 1475 Jubilee. In 1636 the façade was thoroughly redesigned by Gian Lorenzo Bernini (or Luigi Arrigucci) for Pope Urban VIII, whose heraldic bees decorate the façade (you may wish to see the building as it appeared in a 1588 Guide to Rome, when it had a Romanesque bell tower). The interior of the church was redesigned in 1721-722 by Carlo Gimach, a Maltese architect who worked extensively in Portugal, for Cardinal Nuno da Cunha e Ataide from Lisbon; the ancient columns which once supported the building were used to decorate the new large nave.

Statue of St. Anastasia by Francesco Aprile and Ercole Ferrata under the main altar

The statue of St. Anastasia was clearly inspired by Gian Lorenzo Bernini's works. Her ecstatic face is similar to that of St. Theresa and her posture to that of Blessed Ludovica Albertoni. The church was probably named after Anastasia, a sister of Emperor Constantine, but it was later on dedicated to St. Anastasia of Sirmium in today's Serbia, a martyr of the late IIIrd century.