at Sperlonga
(The Blinding of Polyphemus)

Sunday, November 15 (1789). I shall now make a short digression from the Via Appia to a place celebrated in history as having been the occasional residence of the Emperor Tiberius and rendered interesting by an anecdote recorded by Tacitus. This same event is corroborated by another historian, Suetonius.
Sir Richard Colt Hoare - A Classical Tour through Italy and Sicily - published in 1819. 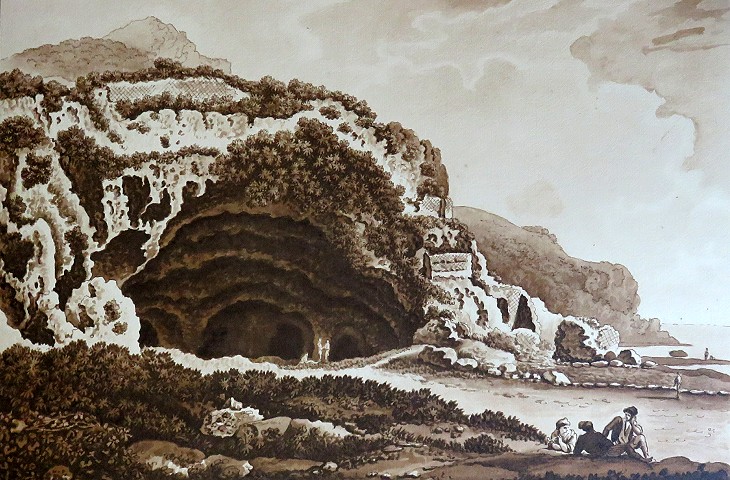 1789 drawing by Carlo Labruzzi who accompanied Colt Hoare in his journey along Via Appia. The image used as background for this page shows a similar 1839 drawing by Luigi Rossini

"It happened, that in a cavern formed by nature at a villa called Spelunca, situate between the gulph of Amyclae and the hills of Fondi, Tiberius was enjoying the luxuries of a banquet with a party of his friends, when the stones at the entrance suddenly gave way, and crushed some of the attendants. Sejanus, to protect his master, fell upon his knee, and with his whole force sustained the impending weight. In that attitude he was found by the soldiers, who came to relieve the prince."
Colt Hoare's translation of Tacitus (Annales, IV, 59).
This event might have caused the abandonment of the site. 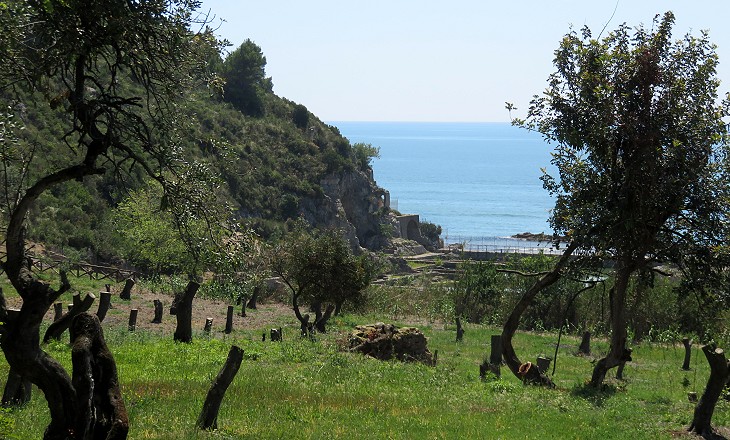 This natural grotto, rendered so interesting to the antiquary by the history connected with it, is situated on the verge of the sea coast, under a mountain covered with a variety of odoriferous plants, and directly opposite to the village of Sperlonga, and the point of land near Terracina.
Colt Hoare The modest little village of Sperlonga situate at a short distance from the cavern, has in a great measure retained the ancient appellation of Spelunca (cave in Latin). Colt Hoare 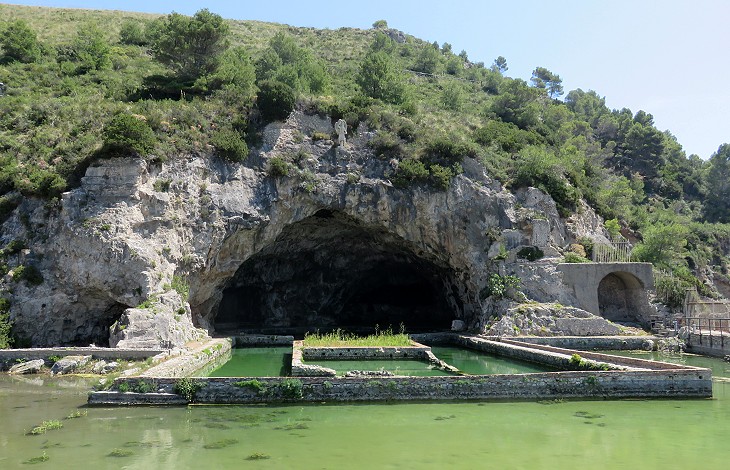 (Spelunca) still exists as a fine natural cavern, and by the antique decorations remaining within it is proved to be the identical grotto to which Tiberius retired with his attendants. It seems to have been divided into two apartments, the interior one being the most elevated: the natural cavities of the rock on each side were probably formed into rooms, and the lower part of the cavern was ornamented with coloured stucco, and paintings characteristic of its situation, such as aquatic plants, and near the mouth of the cavern there is an appearance of resting seats. Colt Hoare 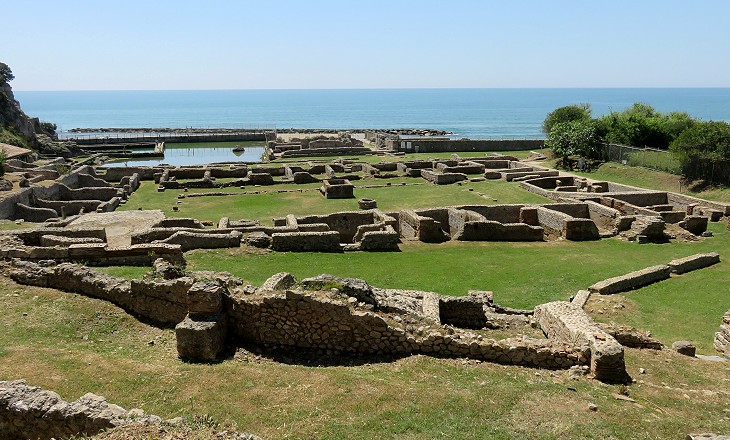 Facilities surrounding a porticoed courtyard near the grotto

This grotto appears to me to have been only an appendage to the more splendid habitation of the emperor which adjoined it, and which is still distinguishable amongst its ruins. Colt Hoare

For a long time the grotto remained a location difficult to reach because there was no road along the coast. Notwithstanding the fascinating account by Colt Hoare few foreign travellers followed his steps. Although there was a general consensus that the grotto had been used in Roman times, the actual location of the villa of Tiberius was debated. 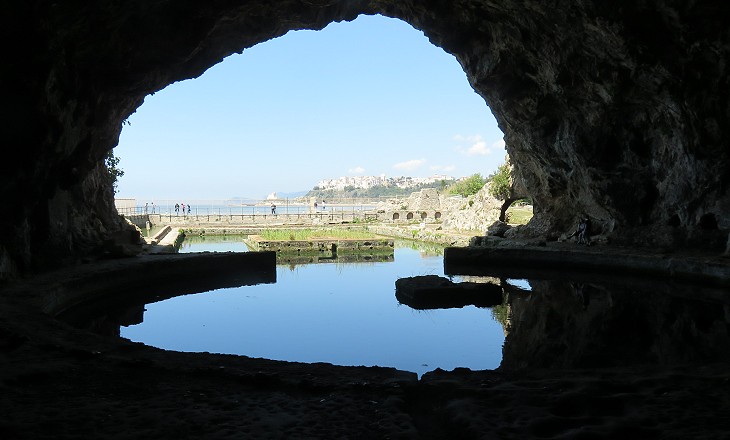 View from the grotto showing the round and the rectangular pools

In 1956 during the construction of a coastal road between Terracina and Gaeta, via Sperlonga, a large number of fragments of statues were found in the area near the cave. This led to an archaeological excavation campaign which identified a number of facilities outside the cave. A rectangular pool had a sort of islet where evidence of an open air dining room was found. 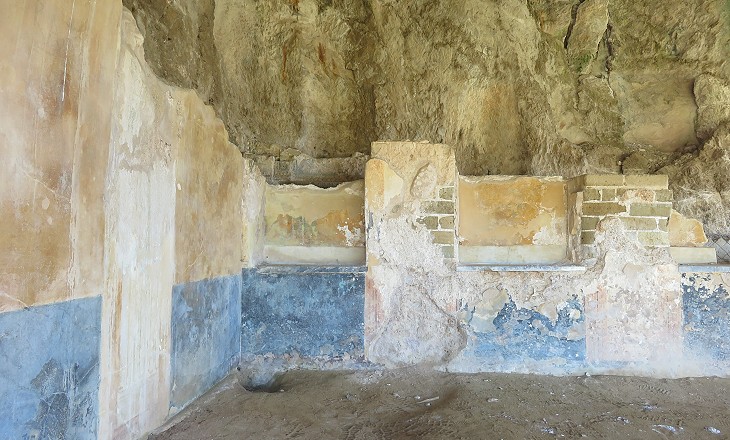 Painted walls and niches inside the grotto

The interior of the grotto was cleared from spontaneous vegetation and it showed that it was embellished by the addition of benches along the walls and theatrical masks (in page two) which served as lamp holders. 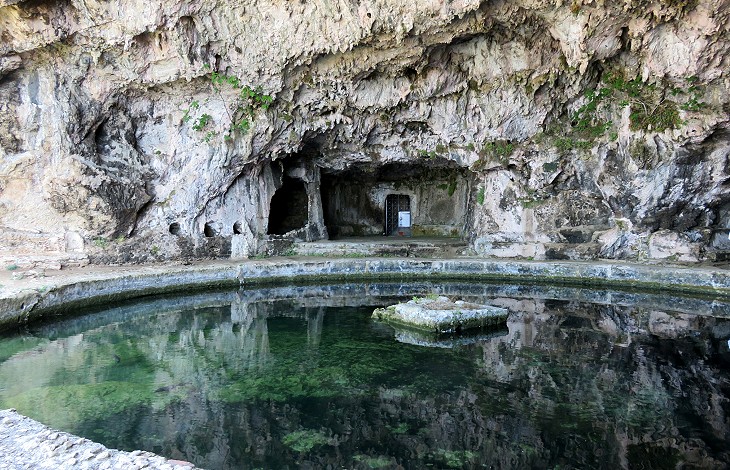 A branch of the cave was adapted to form a sleeping room preceded by a hall. The sleeping room, in line with the Roman usage was very small. Caves which were part of the facilities of a Roman villa by the sea have been identified at Anzio. Most likely the emperor and his retinue reached the villa by boat from Terracina. 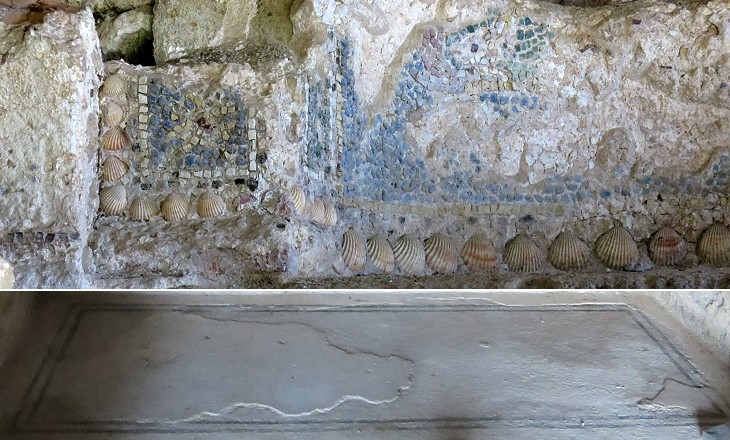 Move to page two and see the statues which embellished the grotto.