- Charles Bridge (Karluv Most)
(detail of a relief showing the bridge in sv. Vita cathedral in Prazsky Hrad)

The lesser town lies on the west of the Mulda (Vltava) and much exceeds the old in pleasantness and buildings. It is joined to the old town by a bridge reckoned one of the finest in Europe. This bridge was begun by the emperor Charles IV in 1357 and was not finished till 1502. It is seventeen hundred feet long and thirty five feet broad, has twenty four arches and the whole is built of hewn stone.
Thomas Nugent - The Grand Tour - 1749
The massy Bridge over the Moldau connecting the Altstadt with the Kleinseite (..) is the longest in Germany; it measures 1790 German ft and is ornamented on each side with 28 statues of saints.
John Murray - A handbook for travellers in southern Germany - 1843 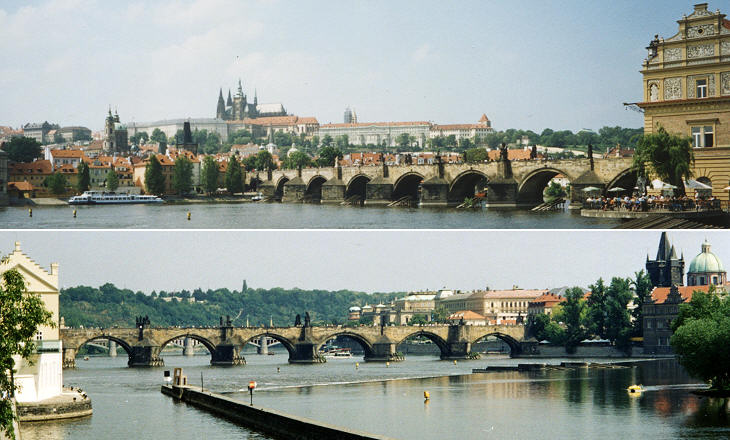 Views of the bridge: in the background Prazsky Hrad (above) and Mostecka Vez (below), one of the towers which protected the bridge

The view of Prague as seen from the bridge surpasses in its grandeur and imposing character the appearance of almost any other city in Germany. Murray
Prague is one of the most beautiful cities in Europe in terms of its setting on both banks of the Vltava River, its townscape of burgher houses and palaces punctuated by towers, and its individual buildings.
From the UNESCO synthesis of the universal value of the Historic Centre of Prague which in 1992 was included in the World Heritage List.
In the Xth century Prague was made up of just two fortified hills (Prazsky Hrad and Visehrad), protecting an easy ford of the river Vltava. With the expansion of trade the two sides of the river were linked by a bridge, at first made of timber and later on of stone. In 1357 King Charles IV of Bohemia asked the Swabian architect Peter Parler to replace the existing bridge with a larger and more reliable one. It was damaged on more than one occasion by war events or by floods, but overall it retains it original aspect. 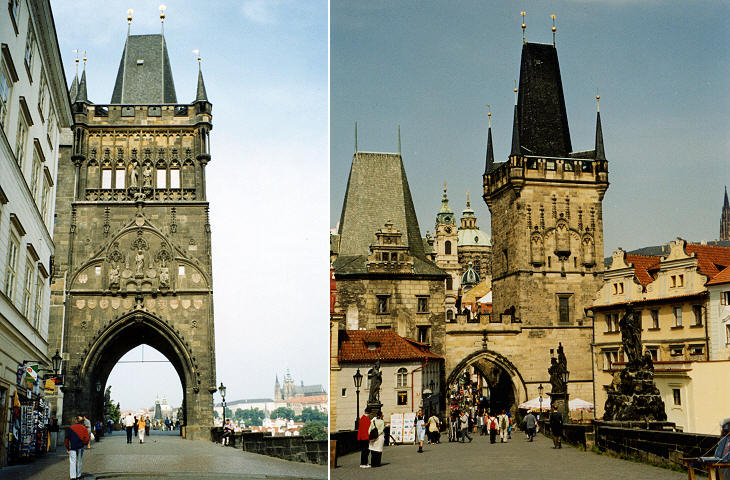 The bridge has two high gates under two large towers at each end. Nugent
The old Watch tower, at the end of the bridge next the Altstadt, alone preserved that part of the town from falling into the hands of the Swedes during the Thirty Years War 1648. They had already mastered the Kleinseite and, their attack being quite unexpected, the bridge gate was so ill guarded that they had nearly surprised it when a Jesuit rushing out of the college close to the bridge let down the portcullis in haste and with the aid of only three defended the post until the citizens and students of the university came up to support them. Murray
Prague is made up of four towns: Hradcany and Mala Strana on the left bank of the river and Stare Mesto and Nove Mesto on the right bank. They had their own defence systems. The access to the bridge from Stare Mesto was protected by an imposing tower (Mostecka Vez) decorated with statues of kings and saints of Bohemia. The access from Mala Strana was protected by two towers: the larger one was added in 1464 and it is almost a twin of Mostecka Vez. 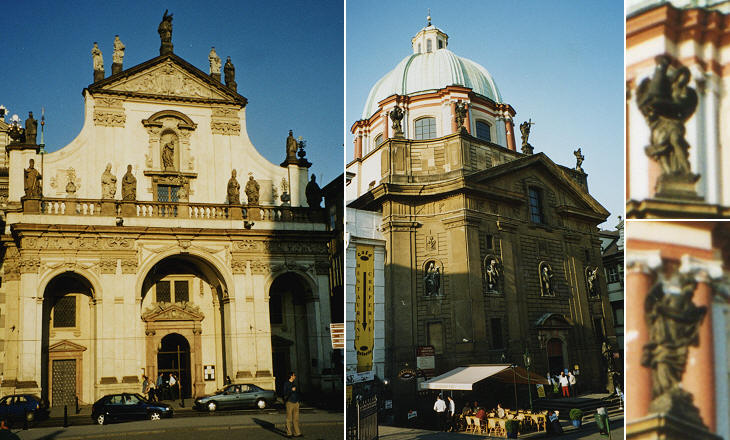 St Salvator was originally built in 1653 as a convent and seminary for the Jesuits. (..) Ferdinand I first introduced this order into Bohemia for the purpose of putting a stop to heresy in his dominions, but so unpopular were they that for many years after their arrival they were recommended not to show themselves in public. Murray
The bridge was part of the coronation procession, which moved from Stare Mesto to the Cathedral of sv. Vita in the Hrad (castle) of Prague. At the end of the XVIth century Bohemia was no longer an independent country because in 1545 the Austrian Archduke Ferdinand I had obtained the title of King of Bohemia for himself and also for his successors. Most of the population was no longer Roman Catholic, while the Austrian Emperors felt obliged to foster a return to the obeyance to the Church of Rome. The contrast was mitigated for a while by the decision of Emperor Rudolph II to establish his Court in Prague. At his death the Court was moved back to Vienna and Bohemia was ruled by foreign governors. On May 23, 1618 the imperial governors were thrown out of the window of their apartment in the Royal Palace (Second Defenestration of Prague). It was one of the starting events of the Thirty Years' War which ended in 1648. The imperial army conquered Prague after the battle of the White Mountain (Bila Hora) in November 1620. The victory was celebrated in Rome as a victory for Christianity and a church was built to commemorate the event (S. Maria della Vittoria).
In Bohemia the process of re-catholicization of the country was led by the Jesuits, who regarded the erection of large and lavishly decorated churches as a way to achieve their objective. The Jesuits of Bohemia had strict links with their headquarters in Rome and they were aware of the developments of Baroque art there. A very large church of the Jesuits (sv. Salvator) was built in the first half of the XVIIth century in the square at the beginning of Karluv Most. In the second half of the century another church (sv. Frantisek z Assisi) was built in the same square and it was crowned with statues of angels holding symbols of the Passion. The statues are almost copies of the statues on Ponte S. Angelo in Rome. 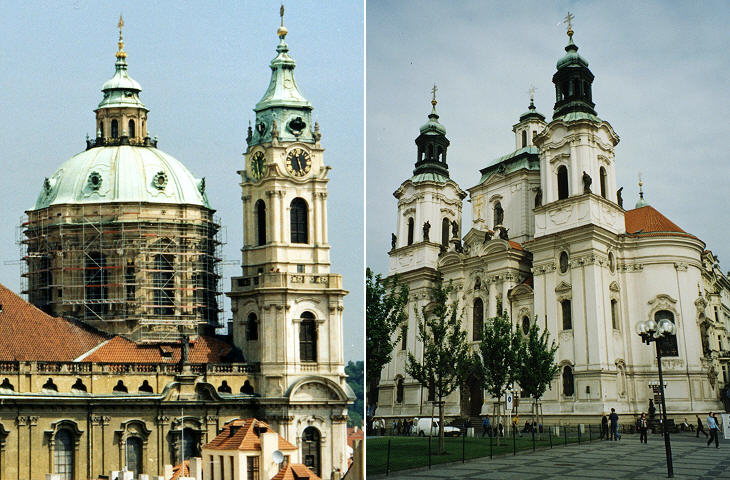 The Churches in the Kleinseite are not very remarkable with the exception of the Church of St Nicholas the largest and most prominent built by the Jesuits in 1628. It is a very magnificent specimen of the style of architecture adopted by that order and is equally distinguished for the splendour of its exterior and the richness of its internal embellishments. Murray
At the beginning of the XVIIIth century the Jesuits started the erection of a very large church (sv. Mikulas) in Mala Strana. This church was clearly visible from the church (sv. Salvator) they had on the other side of the river. At this point the Jesuits thought of giving a new meaning to the bridge by promoting its decoration with statues of saints, having very much in mind Ponte degli Angeli. In 1732-1737 another large church was dedicated to sv. Mikulas in Stare Mesto. The two churches are the finest example of Baroque in Prague and were mainly designed by Cristoph Dientzenhofer and his son Kilian Ignaz. You may wish to see XVIIth and XVIIIth century churches in Vienna. 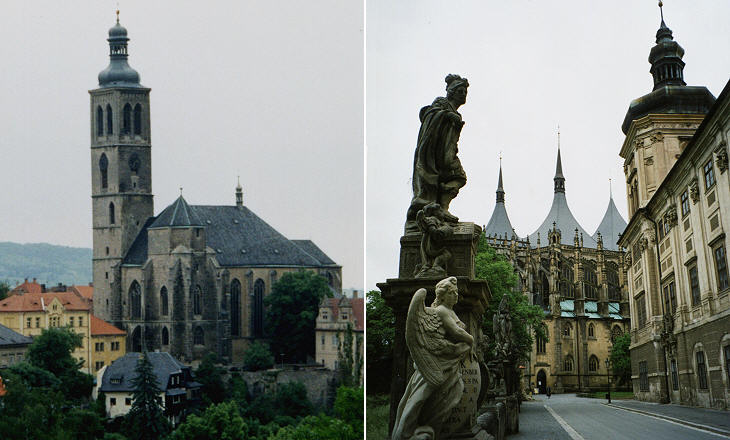 The Jesuits decorated in a very similar way with 13 statues of saints the avenue in front of their monastery in Kutna Hora, an important mining town 40 miles from Prague. The avenue leads from the parish church to the church of St. Barbara, which belonged to the miners' guild.

Move on to part two: The Saints.