- The Road to Mecca
(mosaic in the Umayyad Mosque)

During the Mameluke rule (1260-1516) Damascus was the main city of Syria and the gathering point for pilgrims of the region for their five-week journey to Mecca; the city was per se a holy one because of the relics in the Umayyad Mosque; Damascus maintained this role during the Ottoman rule (1516-1918); every year some thirty thousand pilgrims gathered outside the western walls of the Old Town, from where they started their journey. 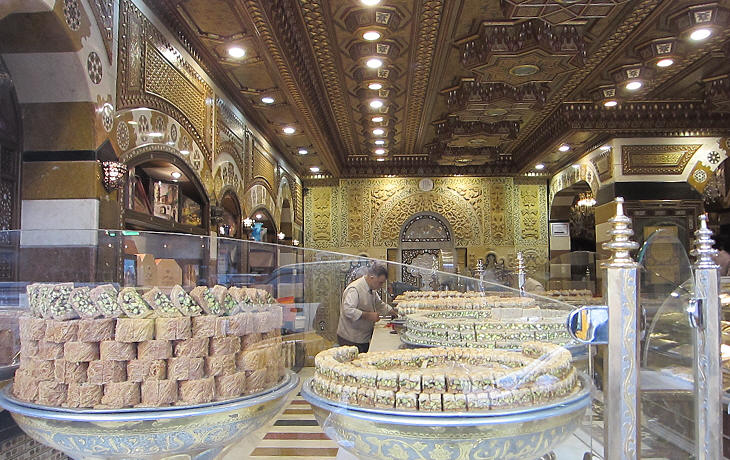 On the south, the suburb extends for two miles, and is inhabited chiefly by Turcomen; it is called Babel Elah [The gate of God) becaufe the gate at the end of it leads both to Jerusalem and Mecca. (..) There are two caravans which go to Mecca every year, one from Cairo, chiefly with the people of Africa, the other from this place, which is commonly under the government of the pasha of Damascus; both the caravans meet near the Red Sea.
Richard Pococke - A Description of the East and Some Other Countries - 1745
Facilities for pilgrims (hammams, inns, soup kitchens, caravanserais) were built along the initial stretch of the road to Mecca together with medreses (Koranic schools), mosques and many mausolea of important Mameluke and Ottoman officers.
Today the road is called Midan and it is known for its long series of pastry shops; the facilities for pilgrims do not exist any longer or have been dramatically modified to turn them into shops and warehouses, whereas a certain number of religious buildings can still be seen, although in a very different context than the one for which they were designed. 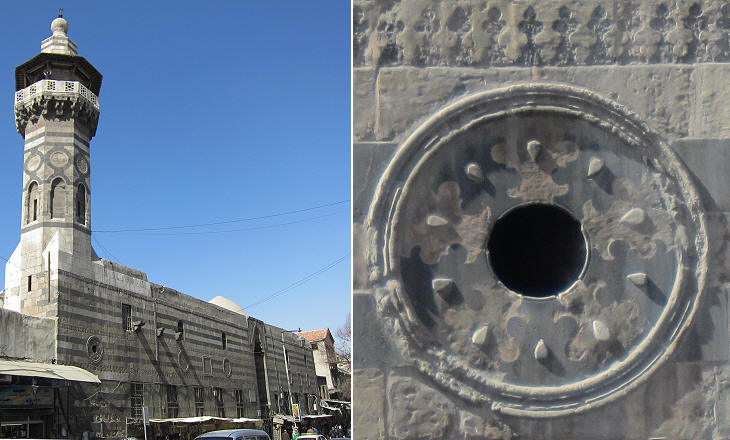 This medrese is perhaps the last Mameluke building of Damascus as it was completed in 1515, one year before the Ottomans conquered the city; because of its rich decoration it is also known as Jam'i al-Jawam'i (Mosque of mosques); it is located at the very beginning of the Road to Mecca. 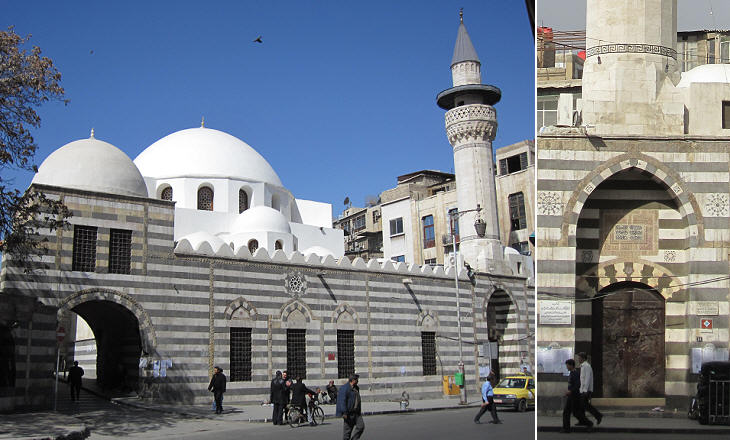 In the second half of the XVIth century the governors of Damascus decided to give the initial section of the road a distinct Ottoman appearance by building two large complexes immediately north and south of al-Sibaiyya Medrese; Darweesh Pacha Mosque was built in 1571 when Sinan, the great Ottoman architect who designed Tekkiye Suleymaniye was still in charge of supervising all constructions commissioned by the sultans; by comparing this building with the nearby Mameluke medrese one can notice the great relevance given to the domes by the Ottomans and the lancet-like design of their minarets. 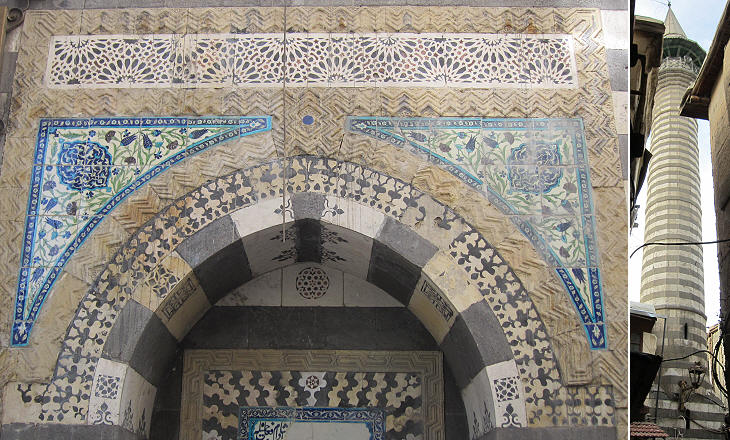 Before conquering Damascus in 1516, Sultan Selim I waged war on the Safavid (Persian) Empire and seized Tabriz, its capital which was known for its talented tile makers; he relocated many of them to Iznik (ancient Nicaea) and tile decoration became a characteristic feature of Ottoman buildings; however the tile decoration of this mosque is based on patterns developed at Kashan, a town south of Teheran, so it is thought to be the work of local artists.
Ottoman mosques and hospices for pilgrims were built also in the maze of narrow streets behind the large complexes along the main road. 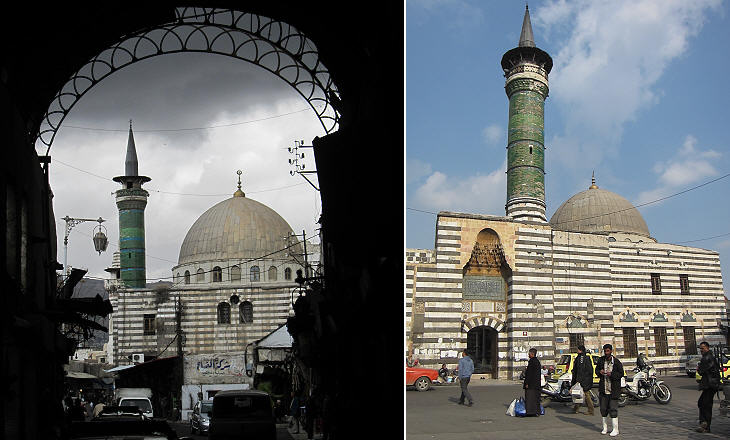 Koca Sinan Pacha was Grand Vizier (see his mausoleum at Istanbul) five times and in an interval between two appointments (1586-1588) he was assigned to Damascus; being an eminent personage of the Ottoman court, he ordered the construction of an imposing mosque at the south-western corner of the walls; owing to this location his mosque was the first of the city pilgrims saw when they returned to Damascus. 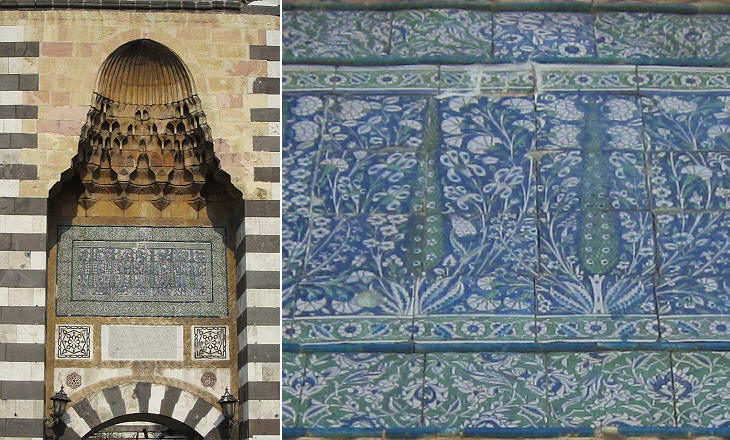 Sinan Pacha Mosque: (left) western portal; (right) detail of its tile decoration (also in the image used as background for this page)

Art historians have come to the conclusion that the tiles used for this mosque followed typical Persian patterns; cypresses are associated with Zoroastrianism, the religion of pre-Islamic Persia, by which they were regarded as a good omen; the Safavids, who united Persia at the beginning of the XVIth century promoted the depiction of cypresses as an icon of national identity. 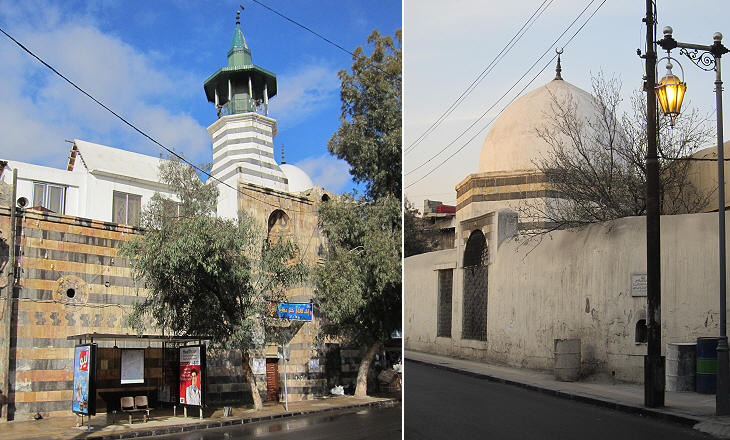 The Road to Mecca acquires a different atmosphere after it leaves the walls of Damascus and imposing Sinan Pacha Mosque; its eastern side borders on a historical cemetery named after Bab as-Saghir, an old Roman gate. During the Mameluke rule many mausolea were built along both sides of the road; sometimes they were associated with a medrese or a mosque, but often they were isolated square buildings known as qubba (dome) because of the shape of their roof (see them in Palermo). 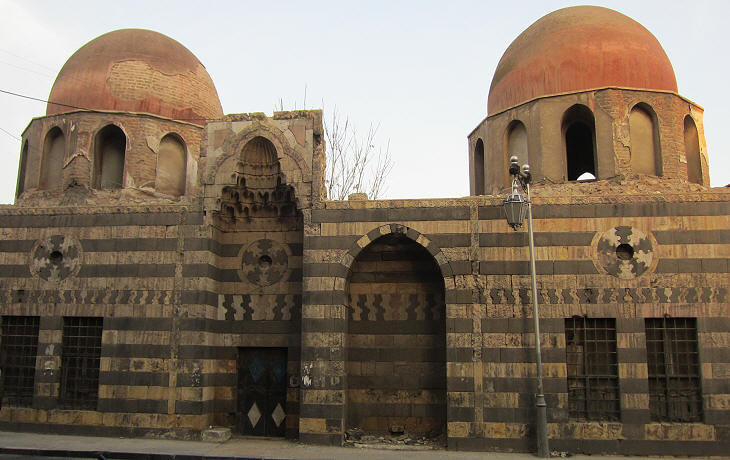 The first Ottoman mausoleum followed the pattern of several Mameluke mausolea which were characterized by twin domes, one for the actual tomb and one for a mosque having the same size as the mausoleum. 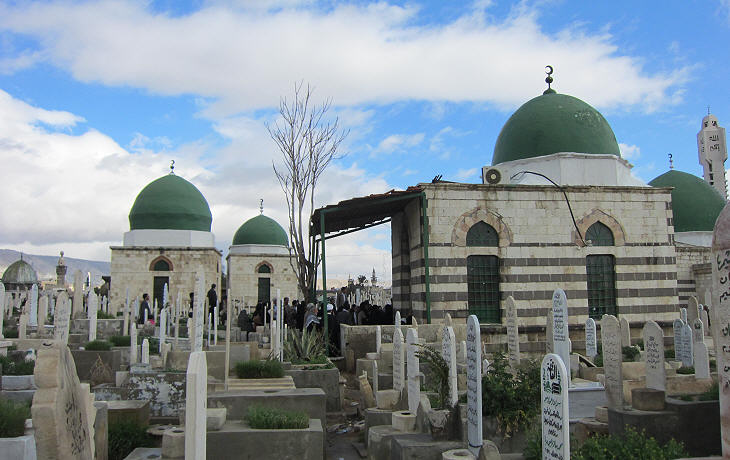 The cemetery of Bab as-Saghir houses tombs of several companions and relatives of Prophet Muhammad, including his wife Hafsa, his daughter Fatimah and Bilal al-Habashi, the first muezzin; some tombs are the object of special devotion by Sh'ia pilgrims. 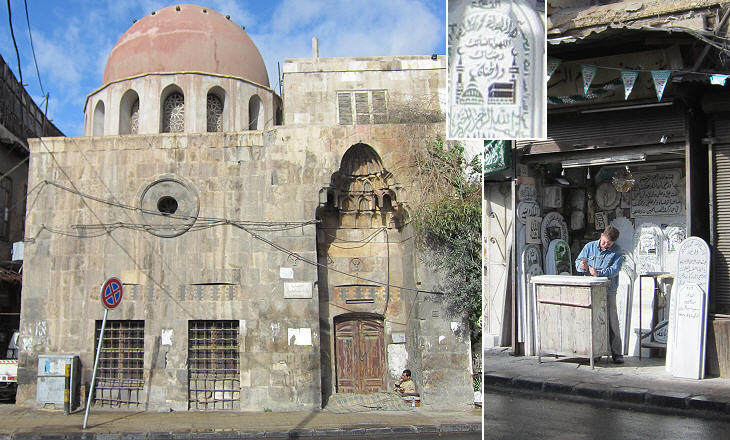 Bab as-Saghir is still an active cemetery; modern tombstones often contain a reference to the historical role of the street by showing symbols of Damascus (left) and Mecca (right - the Kaaba, the holiest Islamic site, which has the appearance of a black cube). 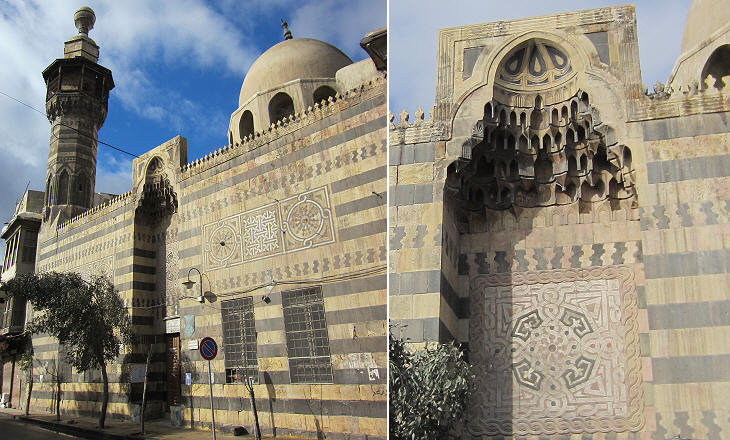 One of the finest mausolea of the area was built by Ahmad Bakri al-Sabouni, a rich merchant, in the XVth century during the Mameluke period; a large medrese was built with the mausoleum and the founder established a waqf, an endowment to support the pious institution and to ensure that prayers were recited for the founder and his descendants; the waqf included revenues from villages, khans, houses and shops. 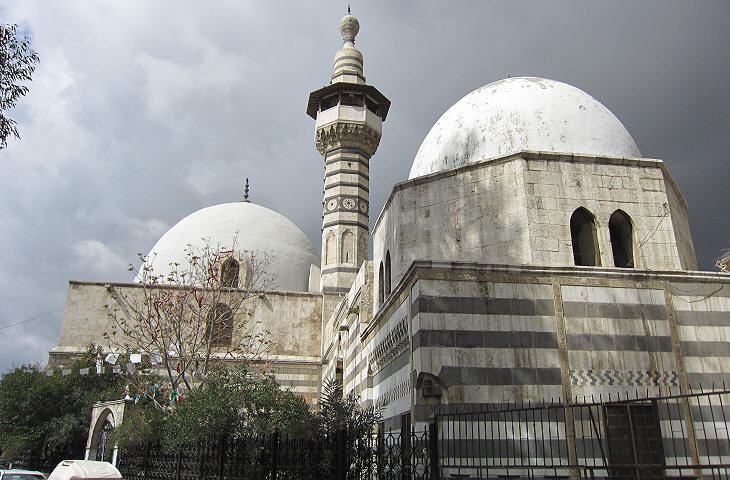 The complex built by Murad Pacha, a governor of Damascus, in 1568-1570 is the first example of Ottoman style building along the Road to Mecca, although the minaret was designed following traditional local patterns; the complex, which included a hospice for poor pilgrims, was built where the street made a slight angle, thus giving it great visibility. 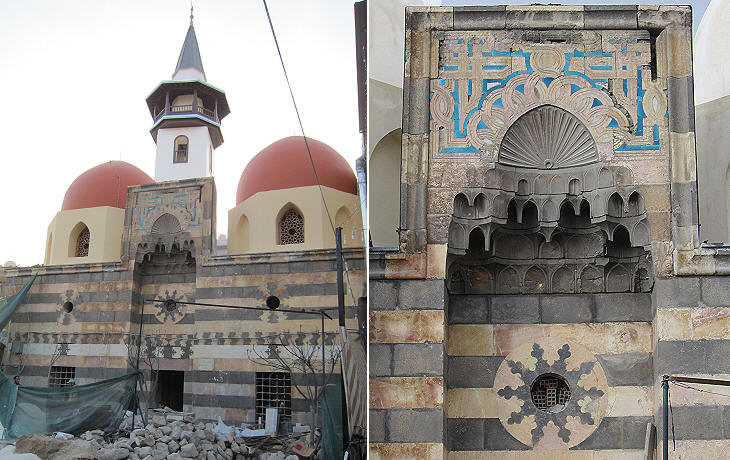 The mausoleum built by Mameluke governor Arak as-Silahdar had the purpose to appropriately house the grave of Suhayb ar-Rumi, one of the first companions of Muhammad, a Byzantine slave (hence the reference to Rumi, a term indicating Europe/the West). 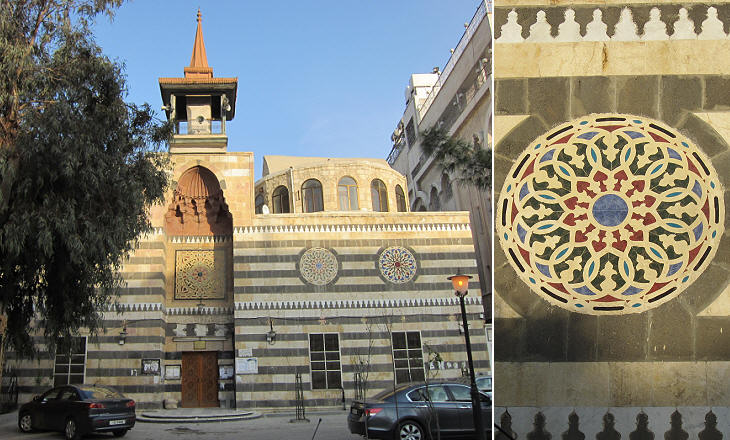