August 1812. I was particularly desirous of visiting Wady Mousa (Petra), of the antiquities of which I had heard the country people speak in terms of great admiration; and from thence I had hoped to cross the desert in a straight line to Cairo; but my guide was afraid of the hazards of a journey through the desert, and insisted upon my taking the road by Akaba, the ancient Eziongeber, at the extremity of the eastern branch of the Red sea, where he said that we might join some caravans, and continue our route towards Egypt. I wished, on the contrary, to avoid Akaba, as I knew that the Pasha of Egypt kept there a numerous garrison to watch the movements of the Wahabi (supporters of a religious movement calling for a return to the earliest Islamic practices) and of his rival the Pasha of Damascus; a person therefore like myself, coming from the latter place, without any papers to shew who I was, or why I had taken that circuitous route, would certainly have roused the suspicions of the officer commanding at Akaba, and the consequences might have been dangerous to me among the savage soldiery of that garrison.
J. L. Burckhardt - Travels in Syria and the Holy Land - 1822 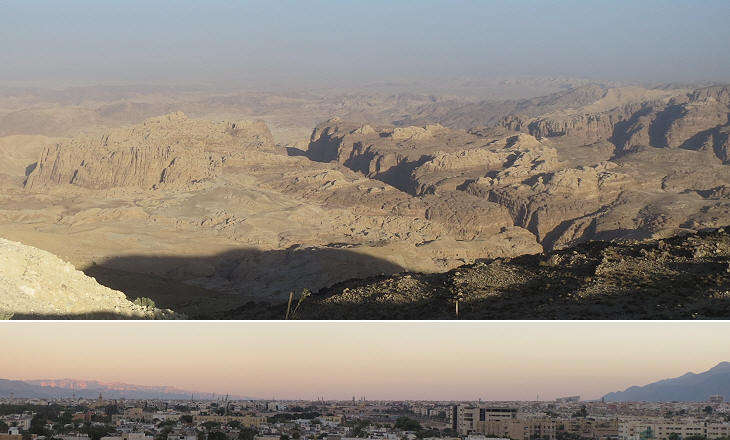 Wadi al-Arabah seen from the mountains near Petra (above) and from Aqaba (below). In the latter image the mountains to the left are situated in Israel and those to the right in Jordan

Eventually Burckhardt reached Egypt without passing through Aqaba, but by crossing the desert between the mountainous region surrounding Petra and the Mediterranean Sea.
August 24th. We saw the great valley (Wadi al-Arabah) forming the continuation of the Ghor. The valley of the Ghor (Jordan), which has a rapid slope southward, from the lake of Tiberias to the Dead Sea, appears to continue descending from the southern extremity of the latter as far as the Red Sea, for the mountains on the E. of it appear to increase in height the farther we proceed southward, while the upper plain, apparently continues upon the same level. This plain terminates to the S. near Akaba, on the Syrian Hadj route, by a steep rocky descent, at the bottom of which begins the desert of Nedjed (Negev), covered, for the greater part, with flints. The same descent, or cliff, continues westward towards Akaba on the Egyptian Hadj road. Burckhardt 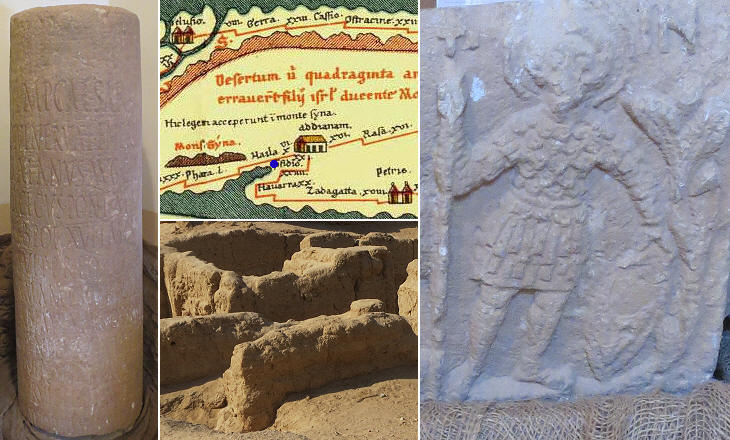 (left) First milestone column of Via Traiana, the road opened by Emperor Trajan from Syria to the Red Sea (Museum of Aqaba); (centre-above) section of "Tabula Peutingeriana", a Vth century map of the roads of the Roman Empire; blue dot: Haila (Aqaba); (centre-below) mud walls of an early IVth century church of Haila; (right) relief portraying St. Theodore of Amasea (Museum of Aqaba)

The Gulf of Akaba was called by the Greeks the Elanitic Gulf, and also by Diodorus and Pliny the Leanitic Gulf, from the town of Ela or Aila, which occupies its northern point. This town was succeeded by the fortress of Akaba, and the gulf accordingly took the name of Bahar el Akaba. No people can boast of possessing such precise accounts with repect to their ancestors as those which the inhabitants of Arabia Petraea find in Genesis and the other books of Moses. Their origin, the boundaries of their territories, their manners, customs, and respective power, are ascertained in those records at an epoch which dates two thousand years before the commencement of our era.
Léon de Laborde, son of Alexandre de Laborde, - Journey through Arabia Petraea (in 1828) - 1836.
The existence of a port at the northern end of the Gulf of Aqaba which lies between the Sinai Peninsula and the coast of Arabia is recorded in the Bible. Its location and name changed over time. The Romans and the Byzantines called it Haila. It was situated in the northern part of today's Aqaba. It was the terminal of a maritime route which carried spices and frankincense from Southern Arabia and India to the Mediterranean countries. 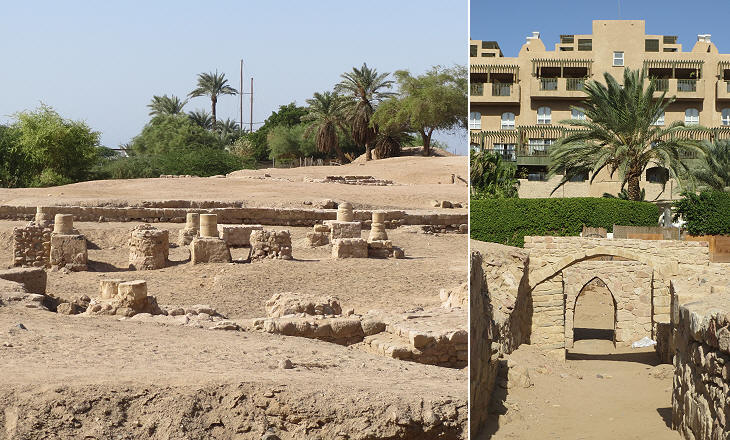 Ruins of Ayla (Arabic for Haila)

A visit to the site of the ancient town occupied our morning. Its ruins consist, at present, only of a few mounds of earth and rubbish, amongst which a single block of white marble appears to be the only remarkable object. Nevertheless, this total absence of vestiges of the town did not destroy the interest we felt in this site. (..) We soon left behind us the palm-trees, and on the left, the ruins of Elana, and a channel through which ran the waters of some neighbouring valleys. Laborde
The Arabs conquered Haila in the VIIth century and they built a new (very small) town. It had the square shape of Roman camps and it was surrounded by walls. Today it is entirely within the premises of a large hotel. It is possible that it was reserved exclusively for Muslims and that the Christians lived outside it. This because a Christian community at Haila is recorded for many centuries after the Arab conquest. 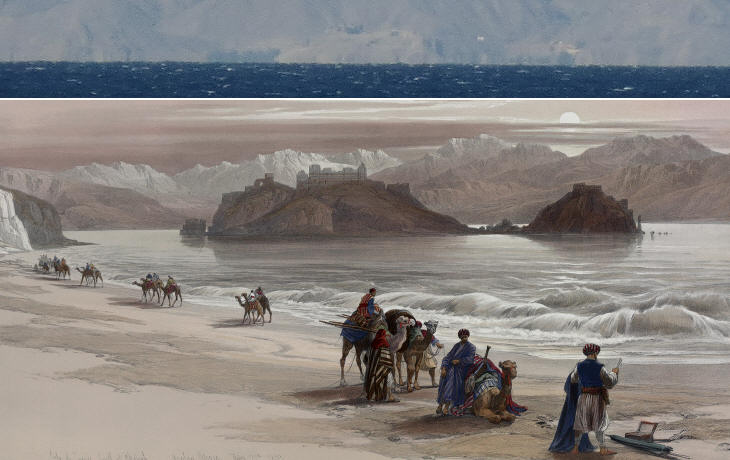 Pharaoh's Island seen from Aqaba (above) and in a drawing by David Roberts, a Scottish painter who visited Egypt and the Holy Land in 1838-1839 (below)

My guides told me, that in the sea opposite to the promontory of Ras Koreye, there is a small island; they said that they saw it distinctly, but I could not, for it was already dusk when they pointed it out, and the next morning a thick fog covered the gulf. Upon this island, according to their statement, are ruins of infidels. Burckhardt
We perceived the isle of Graia, a solitary rock in the midst of the sea. (..) The ruins which are conspicuous upon this island seemed, from the spot whence we observed them, to have belonged to some large building, the character or style of which, however, we could not then ascertain. (..) We approached much nearer to the island. The buildings upon it here presented a very indifferent aspect, altogether disappointing the expectations we had formed of them. A long embattled wall, interrupted at intervals by square towers, runs all round the higher part of the island. (..) With respect to the history of Graia, it may be sufficient here to say, that (..) it became the theatre of Christian valour in the time of the crusades, and was wholly abandoned about the fourteenth century. Laborde
The Crusaders after a series of raids eventually conquered the town in 1116. The initial construction of a small fortress on an islet near the Sinai coast opposite Ayla is attributed to them. The Ayubbids ousted the Crusaders from the area in 1183, before they conquered Jerusalem in 1187. The fortress on the islet (which today is part of Egypt) was strengthened by the Mamelukes, most likely when the first Portuguese ships made their appearance in the Red Sea. (left) Rear section of the fortress; (right) Mameluke decoration (the image used as background for this page shows a Mameluke inscription in a medallion - you might wish to see a similar one at Damascus)

The fortress of Akaba is built on a regular plan, and exhibits the same arrangement and system as all those which have been constructed for the protection of the caravan from Mecca. It is at present, externally at least, in a sufficiently good state to resist the inroads of the neighbouring tribes, who, though not deficient in courage, have no means for enabling them to assail it with success. Laborde
In 1498 Portuguese explorer Vasco da Gama landed on the south-western coast of India after having circumnavigated Africa. In 1509 the Portuguese defeated an Indian-Mameluke fleet near Diu (a naval base the Portuguese retained until 1961) and they broke the Arab monopoly of spices from India.
The Mamelukes built a fortress to the south of the harbour of Ayla, shortly before the Ottoman conquest of the region. The latter strengthened the sea side of the fortress to make it withstand the impact of Portuguese cannon. This part of the fort was destroyed by British warships during WWI. 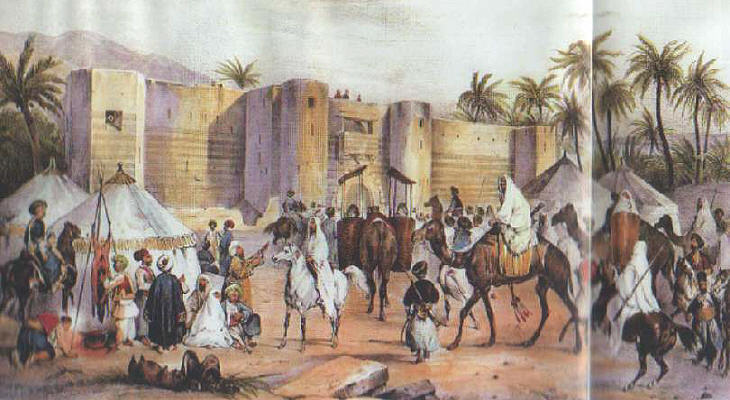 About three o'clock the Alaouins were announced. We went up to the governor's in order to receive them with greater form. From his terrace we saw them enter the court, where they made their dromedaries lie down, leaving them at the same time to the care of two pedestrian attendants. There was, in the arrival of these chieftains, in the appearance of their simple and tattered garments, their expressive features, the fantastic and gaily coloured ornaments of their camels, and in the respectful salutations of all the people of the fortress, who collected around them, something antique and scriptural. Jacob and his sons, on their way to Egypt, the Magi arriving from remote regions, or those kings of Arabia so often mentioned in the Bible, seemed to be pictured in these chiefs of the desert. Laborde
The development of new trade routes between India and Europe caused the decline of Aqaba. Charles Doughty, in Travels in Arabia Deserta which was published in 1888, described it as a palm village. Its economy depended on the yearly passage of the Damascus caravan to Mecca with thousands of pilgrims and many more camels. An officer, called Amir al-Hajj, was responsible for the safety of the pilgrims. He had a troop of soldiers under his command. It was a challenging task; failure could mean the end of a brilliant career in the Ottoman army. 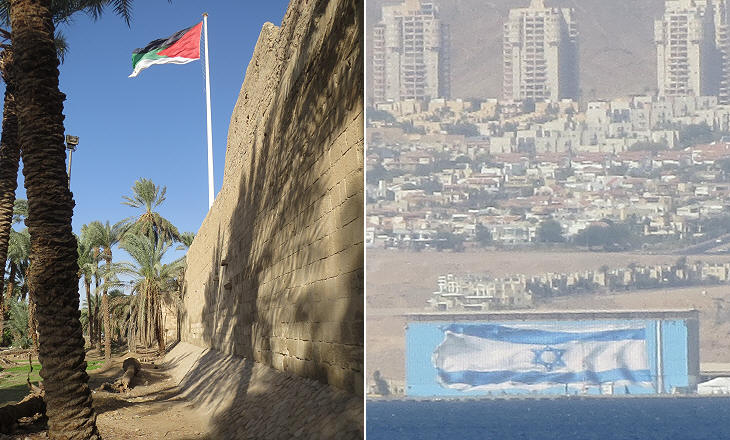 We planted our standard on the highest rock in the island of Graia, and took possession of it in the name of France. If the violence of the winds have not yet overthrown that ensign, the next traveller who succeeds us may perhaps behold it with pleasure as a remembrance of those who, like himself, lately wandered on that shore. Laborde
Colonel Bremond called to felicitate me on the capture of Wejh, saying that it confirmed his belief in my military talent and encouraged him to expect my help in an extension of our success. He wanted to occupy Akaba with an Anglo-French force and naval help. He pointed out the importance of Akaba, the only Turkish port left in the Red Sea, the nearest to the Suez Canal, the nearest to the Hejaz Railway. (..) In my opinion, Akaba, whose importance was all and more than he said, would be best taken by Arab irregulars descending from the interior without naval help.
T. E. Lawrence - Seven Pillars of Wisdom - Chapter XXVIII - 1940
In 1917 the Arabs of today's Saudi Arabia rebelled against the Ottomans with the support of Britain. Aqaba was conquered by the rebels in July 1917. They were led by members of the Hashemite family who claimed ancestry from the family of Prophet Muhammad. The flag of the Arab Revolt had a religious significance. The horizontal stripes were a reference to to the Umayyad (white), Abbasid (black) and Fatimid (green) Caliphates, whereas the red triangle was the symbol of the Hashemites. It was a way to indicate that the Ottoman Sultan was not a legitimate Caliph.
A gigantic flagpole was erected in 2004 near the fortress. In 2013, in a sort of tit for tat response, the City of Eilat, which stands opposite Aqaba, painted the largest Israeli flag in the world on a concrete hangar. 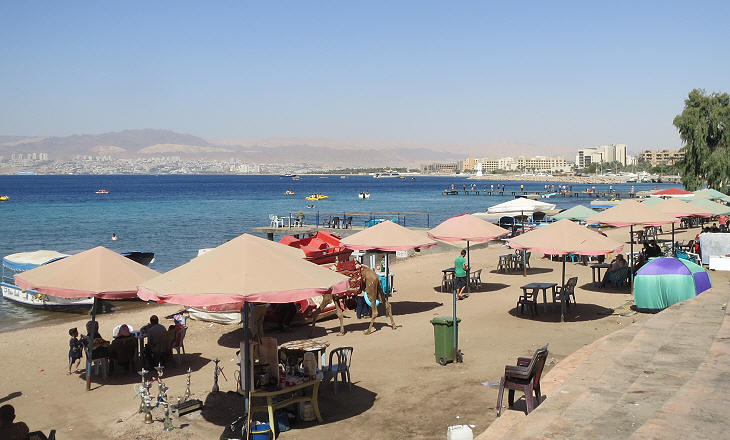 Today the economy of Aqaba is booming. It is the entry port of Chinese products to Jordan and other Arab countries. Its beaches and coral reefs are visited by bathers and snorkellers from all over the world. In 2001 a Special Economic Zone was set up by Jordanian authorities to favour the development of new businesses. 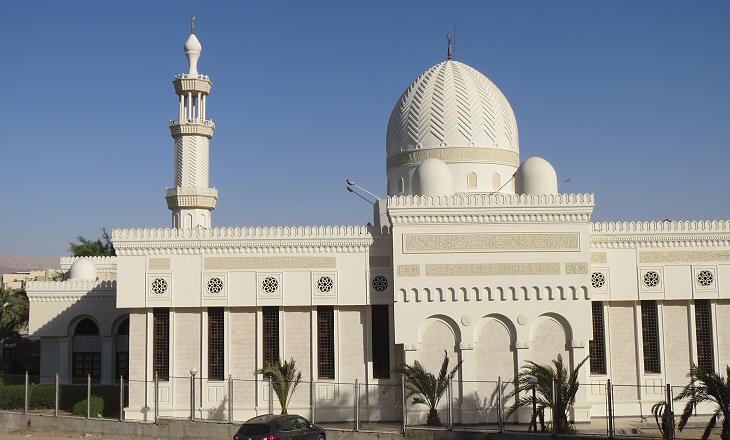