When travellers coming from Sebha approach the district of Ghat, near the Libyan border with Algeria, they start to notice a growing number of isolated rocks, which often have the appearance of mushrooms with dark caps and yellowish stalks; they are the first signs of the Acacus Mountains, a low ridge of rocky mountains having a north-south direction. 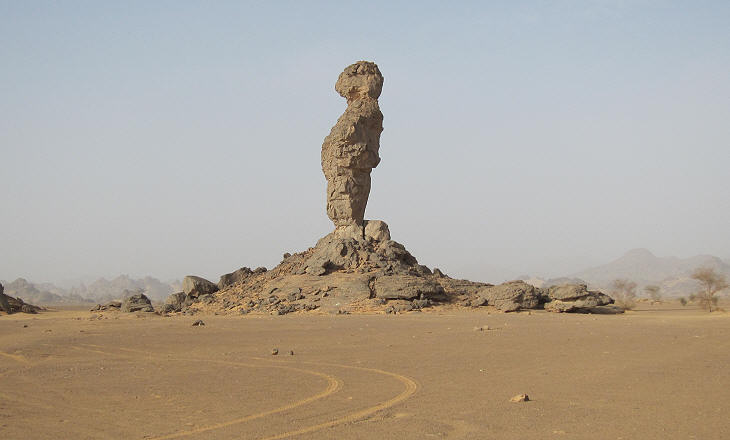 Adad, the Finger, at the northern entrance to El Auis

One could think that a region of rocky mountains was avoided by caravans crossing the desert, yet the Acacus Mountains were a main route between Sub-Saharan Africa and the Mediterranean coast; one of the advantages of this route was that it provided travellers with easy to identify reference points, such as the particular shape of some peaks, natural arches and unique rocks; in addition some eroded rocks were used as a shelter during the hottest hours of the day or sandstorms. 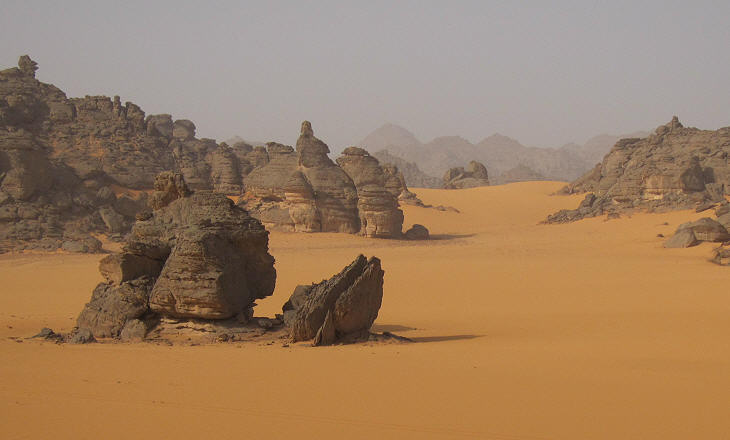 El Auis (or Awiss) is the name given to the northern section of the Acacus Mountains; the passage across the mountains is facilitated by the presence of uadi, beds of ancient rivers; the landscape changes continuously with the peaks becoming slightly higher the more one goes southwards; Uadi Teshuinat lies to the south of El Auis.
While the sand has a colour with orange and even reddish tones, the rocks appear black, but when scratched they reveal a pink layer. 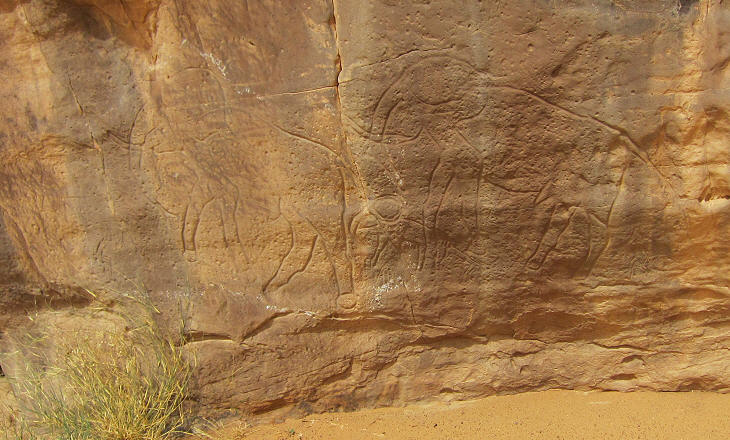 In the 1950s Fabrizio Mori, an Italian archaeologist discovered that, similar to Uadi Mathendush, the ancient inhabitants of El Auis carved the rocks to depict the great animals which populated the region and first of all the biggest ones, the elephants. 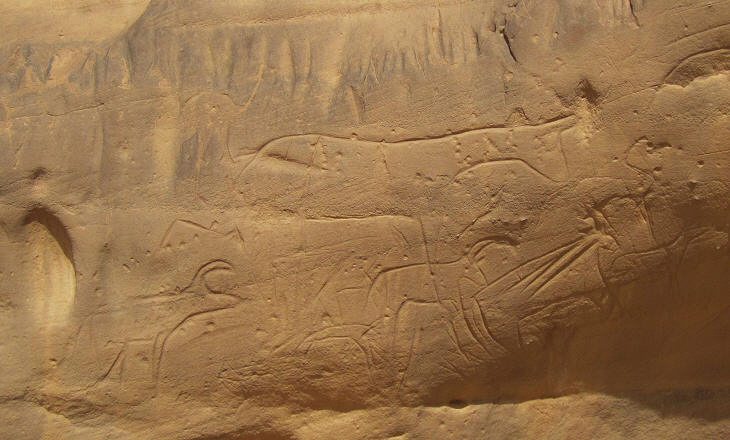 The carvings at El Auis are mainly the work of herdsmen, rather than hunters; this would indicate that they are more recent than those at Uadi Mathendush, because the grazing of sheep or cattle is an activity which developed at a later stage than hunting. 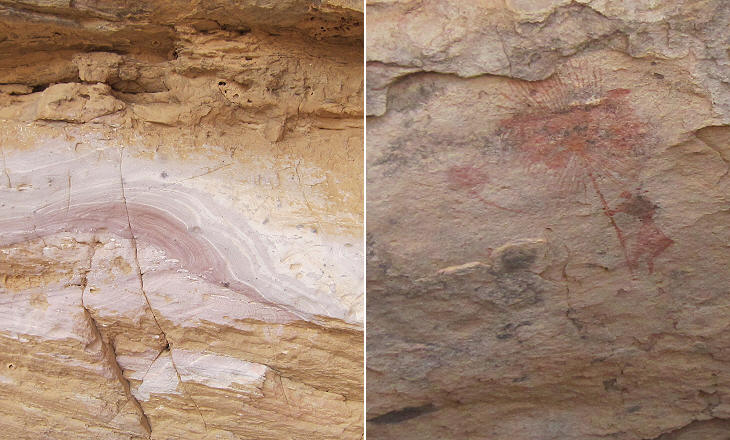 (left) Veins of the rock; (right) a palm tree

What was really new in the discoveries made by Fabrizio Mori was the presence of many small paintings; the rocks had veins of different colours (similar to those of Petra) which the ancient inhabitants of the region smashed into a fine powder; the powder was fixed with the white of ostrich eggs to make a coloured paste which was then applied to the most sheltered parts of the rocks. These paintings were not limited to depicting animals, but they also portrayed scenes of hunting and ceremonies. 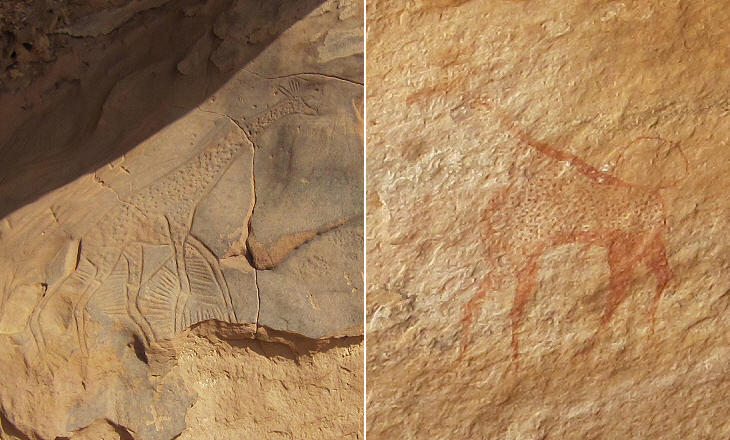 Carvings and paintings span a very long period of time and are helpful in documenting the changes in the climate of the region and therefore in its flora and fauna; great mammals such as giraffes and elephants are typical of a savannah ecosystem, which today can be found in Africa only at much lower latitudes. 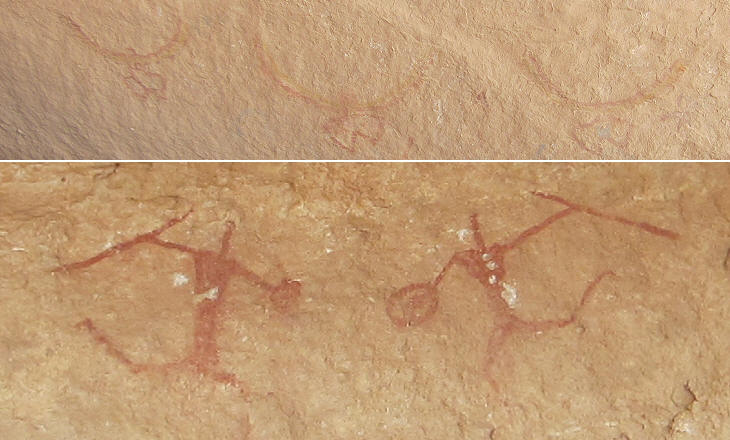 (above) Three eagles or bird-men; (below) dancing warriors

The art of art... is simplicity. (Walt Whitman); the paintings of the Acacus Mountains are not only evidence of our ancestors' life, but works of art which UNESCO experts have regarded as having such value and interest to include the Acacus Mountains in the World Heritage List for their rock-art. 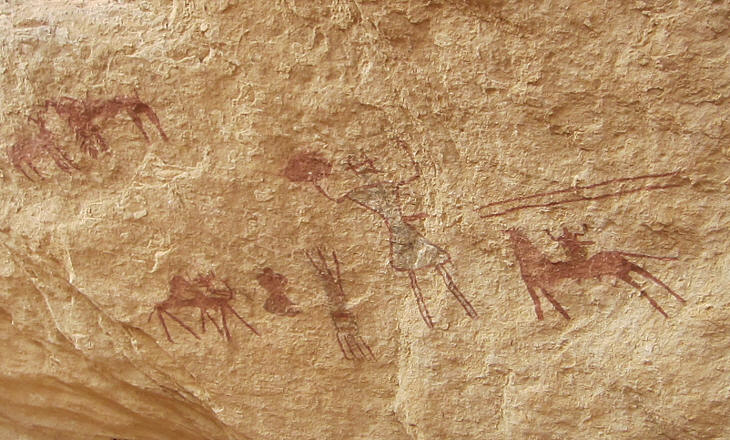 The presence of horses is an indication that the painting belongs to a relatively more recent period, when the Garamantes controlled the region; a camel indicates an even more recent painting because this animal was introduced when the climate worsened. 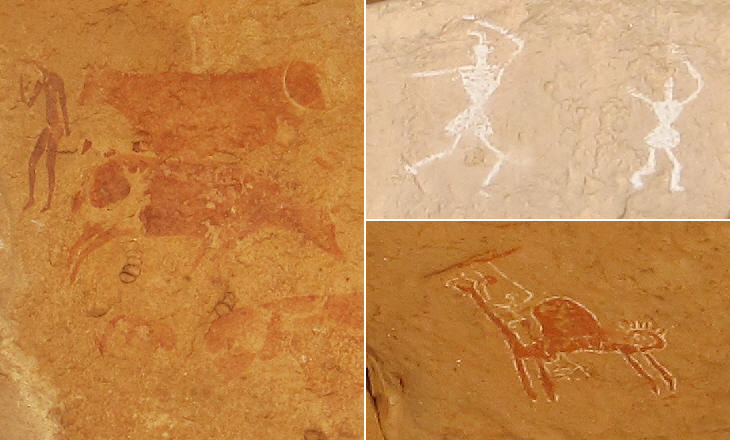 Domesticated cattle and other subjects

The pastoral art of the Acacus Mountains was centred on cows, the true focus of these prehistoric herdsmen; in general the most ancient paintings are also those with the highest artistic content. 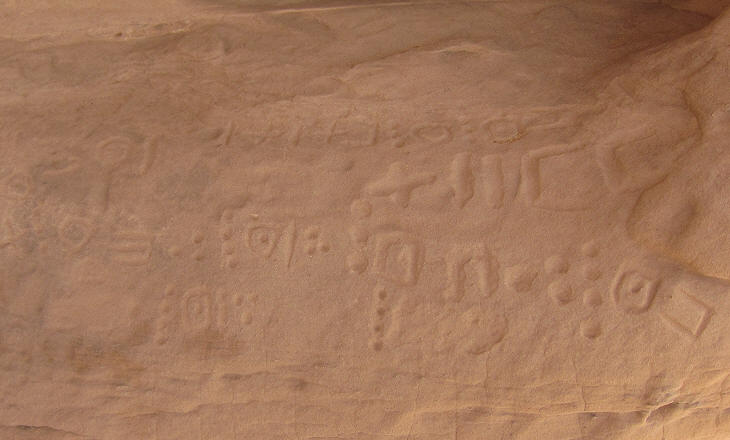 Tifinagh is the alphabet of the Tuareg, the Berber people who live in the Ghat region and in Algeria; it is a consonantal alphabet although the final vowel may be indicated; tifinagh means Punic, so the alphabet was developed after the desert tribes made contact with the Carthaginians.