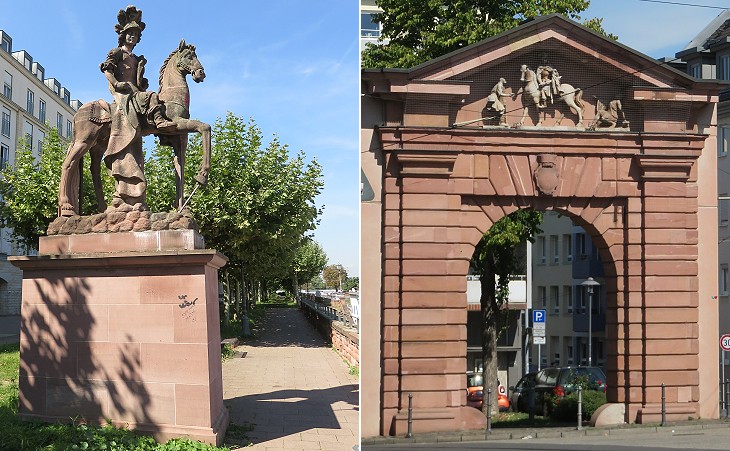 (left) Equestrian statue of St. Martin of Tours near Kastrich, the site of the Roman fortress; (right) Gautor, a 1650 gate of the town with statues of St. Martin and two beggars

Martin of Tours is the patron saint of Mainz; he served in the Roman cavalry in Gaul in the second half of the IVth century and he might have fought to defend the Rhine border. He was extremely popular among the Franks, both during the Merovingian and the Carolingian dynasties during which Mainz flourished. In 780 it became an archdiocese, an event which had a major impact on the city, because eventually its Archbishops became the rulers of Mainz and of the surrounding region until 1793. 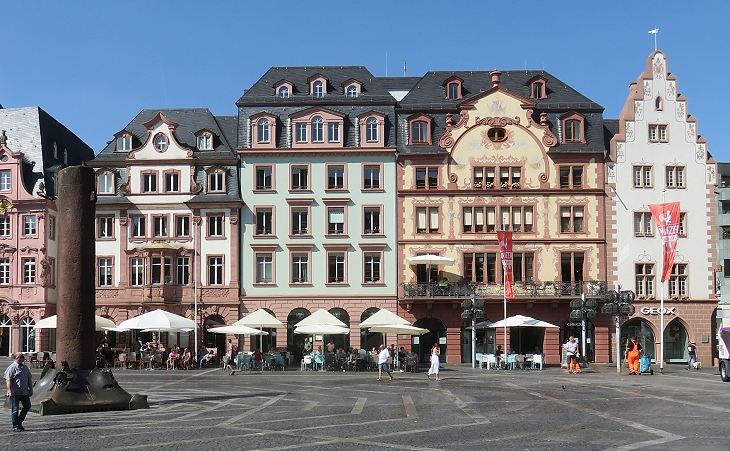 The situation is charming in the middle of a very beautiful country. The town is large, populous, and well built; the fortifications regular and the public buildings magnificent. The Jews were expelled this city in 1443, but afterwards re established; Protestants are permitted to live here, but not allowed the public freedom of their religion. The university is said to have been founded by Charlemain about the year 800, but is not in any great repute at present. (..) They have a fine bridge of boats over the Rhine which is swelled here by the junction of the Maine to a very great breadth. (..) Mentz has a flourishing trade, especially in wines, and its commerce is the brisker by reason that all the merchandize which passes up and down the Rhine, stops at this city to be put on board fresh bottoms.
Thomas Nugent - The Grand Tour - 1749 Marktbrunnen (Fountain of the Market)

The elector of Mentz is arch chancellor of the empire in Germany and the second person next the emperor. The present prince is Francis count Offein, born in 1689, chosen archbishop and elector of Mentz, 22 April 1743. He is absolute in his electorate which extends about 60 miles in length and about 50 in breadth. His revenue is about 100,000 l a year. In time of war he maintains 8000 foot and 800 horse, but in time of peace he seldom keeps above half that number. His arms are a wheel with the archiepiscopal mitre, the first elector of Mentz having been the son of a wheelwright. Nugent
The fountain was built at the initiative of Cardinal Albert of Brandenburg, Archbishop of Mainz in 1514-1545. He made large donations to Pope Leo X for the construction of S. Pietro Nuovo. The Pope authorized him to promote a special sale of indulgences to repay his debts. They were unaware that Martin Luther, an Augustinian monk in Albert's diocese, would have challenged that decision. The long inscription celebrates Holy Roman Emperor Charles V on two accounts: his victory at Pavia against Francis I, King of France and his repression of a widespread revolt of the German peasants; both events occurred in 1525. 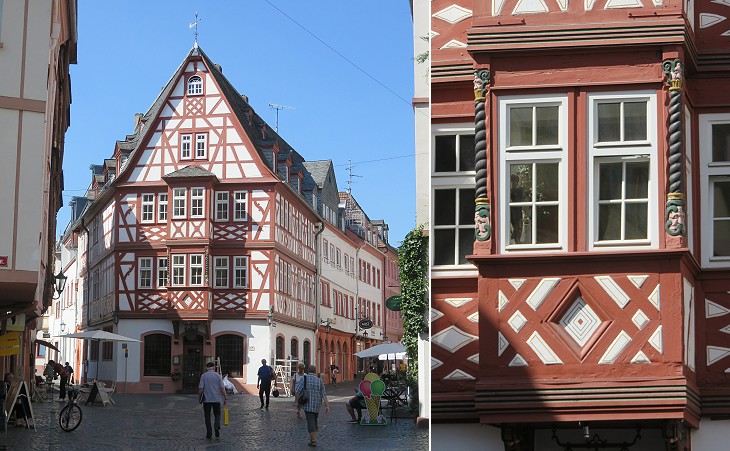 Traditional houses; they have been reconstructed after WWII, as those at Wochenmarkt Platz

Mayence, the Moguntiacum of the Romans, belongs to the Grand Duke of Hesse Darmstadt, and is the most considerable and important town in his dominions; but, as the chief and strongest fortress of the German Confederation, it is garrisoned by Prussian and Austrian troops in nearly equal numbers, and is commanded by a governor elected alternately from either nation for a period of five years. (..) Though reduced from its former wealth and splendour by the fortunes of war, and still showing, in its irregular streets and shattered and truncated buildings, the effects of sieges and bombardments, it ought not to be regarded merely as a dull garrison town. (..) Upon the Quai near the place where the steamer stops are two large red buildings. The first is the Kurfürstliche Schloss or ancient Palace of the Electors of Mayence who were archiepiscopal sovereigns and princes of the empire; it is now converted into a Museum (you may wish to see a page on some residences of the Archbishops-Electors of Cologne and Trier).
John Murray - A Hand-Book for Travellers on the Continent - 1838
The German Confederation was dissolved in 1866 after Prussia defeated Austria at Sadowa. In 1871 the Grand Duchy of Hesse became a constituent state of the German Empire. Today Mainz is the capital of Rheinland-Pfalz, one of the sixteen states of the Federal Republic of Germany. 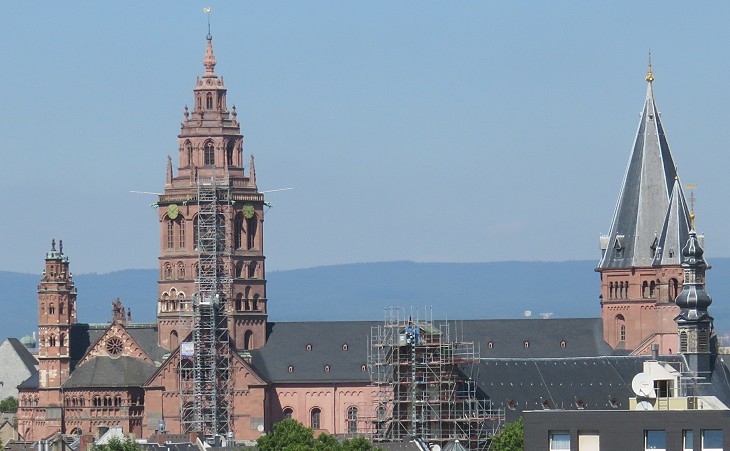 Cathedral from the Citadel

The cathedral is a fine Gothic structure built of the same stone as the palace and contains many sumptuous tombs of deceased electors. Nugent
The most remarkable object in Mainz is the Cathedral, less interesting for any beauty of architecture (as it is built in the massive, round arched Gothic style) than for its great antiquity, having been begun in the Xth, and finished in the XIth century. The building however has suffered so much at different times from conflagrations, from the Prussian bombardment of 1793, and afterwards from having been converted into a barrack and magazine by the French, that the only portion of the original structure, remaining in a tolerably perfect state, is that behind the altar at the eastern end. Murray 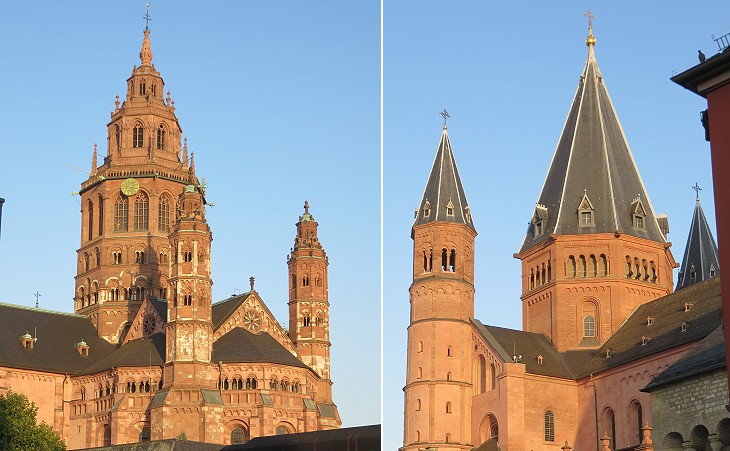 Choirs of the Cathedral: (left) eastern (completed in 1361); (right) western; it was rebuilt after 1871 when the central government promoted a Gothic Revival style as a mean to strengthen the German aspect of the town, similar to what can be noticed in the Cathedrals of Trier and Cologne

The splendid cathedral of Mainz was re-built and re-consecrated between 1037 and 1049 and again restored after a fire between 1056 and 1106. The nave was vaulted with pointed arches by Archbishop Conrad, probably after the fire of 1190. (..) The cathedral during the Napoleonic wars went through many vicissitudes, and was used at one time as a hay magazine, and at another as a slaughter house. It has two apses, two transepts and six towers, that over the western crossing having been re-constructed. The domes are octagonal and rest on squinch arches.
Thomas Graham Jackson - Byzantine and Romanesque Architecture - 1913 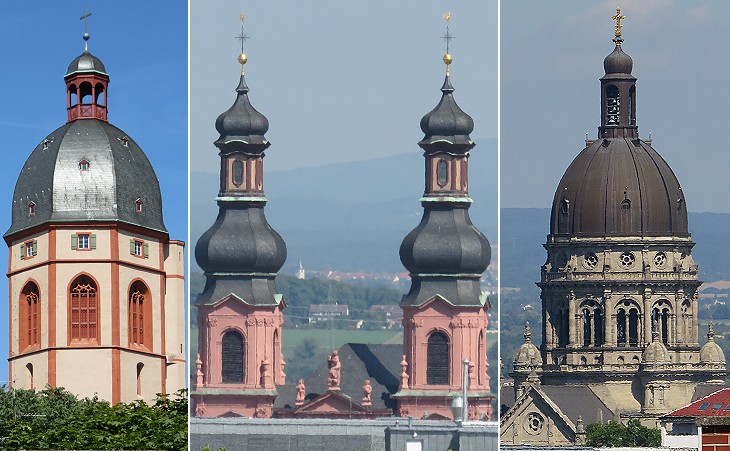 The first Archbishop of Mayence was Boniface, an Englishman, who left his country with eleven other monks, to preach the Gospel to the barbarous nations of Germany; in the course of his mission he converted more than 100,000 heathens, and became the apostle of Germany. The Elector, who was at the same time Archbishop of Mayence, was premier prince in the German empire; he presided at Diets, and at the Election of Emperor, where he exercised very powerful influence, so that one Primate Werner, on proposing a candidate is reported to have added, "I have others in my pocket". Murray
Being ruled by a Roman Catholic Archbishop, Mainz had many churches and statues, e.g. that of the Virgin Mary at Augustinerkirche which is shown in the image used as background for this page. 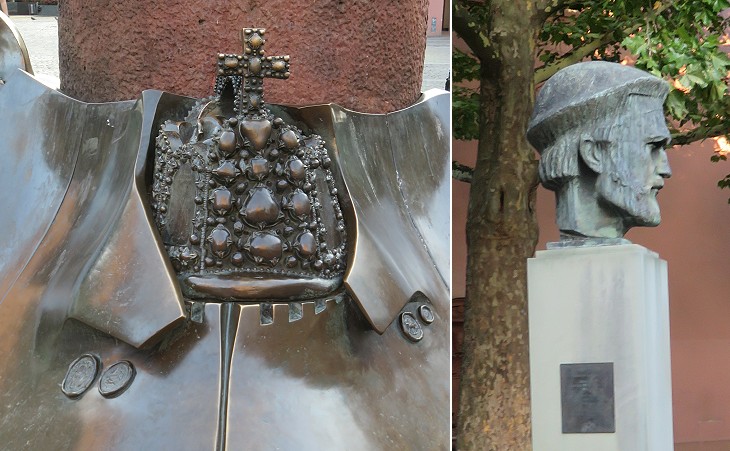 (left) Crown of the Roman Holy Emperors in the monument at Wochenmarkt Platz; (right) 1962 bust of Johannes Gutenberg by Wäinö Aaltonen, a Finnish sculptor, outside the Gutenberg Museum

The archbishops of Mainz had the right of placing the crown on the head of the German Emperors, and are frequently represented on their tombs in that act. (..) Mainz was the cradle of the art of printing, and the birth-place and residence of John Gensfleisch, called Gutemberg, the discoverer or inventor of moveable types. Murray 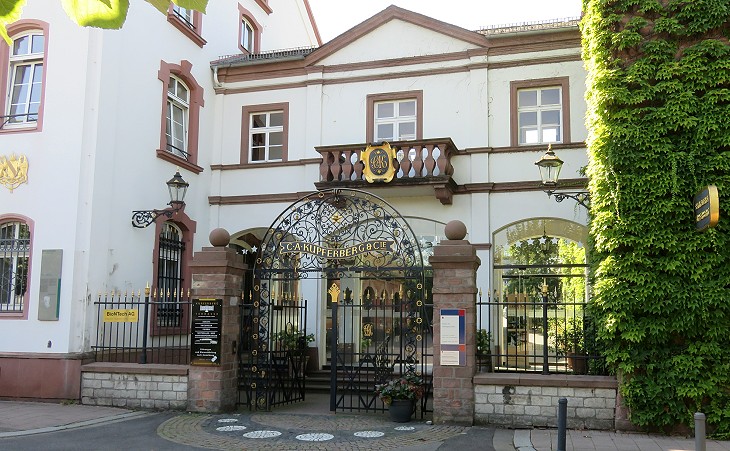 HQS of Kupferberg & Cie, manufacturers of sekt, a sparkling wine, since 1850 in the district of Kastrich

The best vineyards for Rhenish wine are in this neighbourhood; among the best Hockheim (a neighbourhood opposite Mainz on the right bank of the Rhine) is so famous for good wines, that the best Rhenish is from thence called Old Hock. Nugent
The canons of the Cathedral, supported by its enormous revenues, lived a jovial life, as may be gathered from the answer they returned to the Pope, who had reproved them for their worldly and luxurious habits: "We have more wine than is needed for the mass, and not enough to turn our mills with.'' Murray
Viticulture was massively introduced in the Rhine valley in the late IIIrd century. It is the most evident heritage of the Roman period.

Return to the page on the Roman town.