In today's world the relevance of Central Asia is rather limited; the media rarely report from this area apart from news about the exploitation of its resources in oil and natural gas. The names of the modern countries into which its vast territory is split are unfamiliar to many and only experts in geography are aware of the exact location of their borders. Yet the region played a great role in the past in two respects: a) as a crossroads of trading routes leading to the Mediterranean Sea, Persia, India and China and later on to Arabia and Russia; b) as the area from which nomadic tribes moved westwards, southwards and eastwards causing gigantic migrations towards other regions of Asia and Europe.

Map showing various trade routes between the Mediterranean Sea and the Far East: 1) Bukhara; 2) Samarkand; 3) Khiva (in other sections of this website: 4) Sardis, 5) Trebizond, 6) Constantinople, 7) Xian and 8) Beijing - you may wish to see also Tabriz in Northern Persia

Silk Road(s) is a term introduced in 1877 by German geographer Ferdinand von Richtofen to describe the trade routes between the Mediterranean basin and the Far East. Silk was one of the main commodities exchanged along these routes, but not the only one; spices (mainly pepper), dye (indigo), furs came to the west through them. Manufactured goods (small metal objects and glass wares) were shipped eastwards and the imbalance was covered with payments in gold: Roman, Byzantine and Venetian gold coins have been found in many locations in Central and Eastern Asia.

When I made ready to leave Khwarizm (the region of Khiva) I hired camels and bought a camel-litter. The servants rode some of the horses and we put rugs on the rest because of the cold. We entered the desert which is between Khwarizm and Bukhara, an eighteen days' journey through sands, with no settlements on the way except the small town of Kit. (..) In this desert there is a journey of six nights without water.
H. A. R. Gibb - Selection from the Travels of Ibn Battuta in 1325-1354
Central Asia lies to the East of the Caspian Sea; it is separated from Persia, India and China by ranges of mountains, while the northern limit of the area (towards Siberia) is not clearly defined. Two rivers, Amu Daria and Syr Daria, flow from south to north and they interrupt the steppes and deserts which cover most of the region. They empty into the Aral Sea, a closed basin.

From Khiva to Bokhara we went by Hezaresp and Fitnek, crossing the Oxus at Kukurtli. (..) The breadth of the Oxus was here so great that both banks were hardly distinguishable at the same time; this was probably owing to the season, for its waters were swollen, and covered a greater surface from the abundant supplies it had received in the spring. Its yellow waves and tolerably rapid current presented a spectacle not without interest to my eye. The nearer bank is crowned far away to the horizon with trees and with farms.
Arminius Vambery - Travels in Central Asia in 1863
In the XXth century the Amu and Syr Daria were used to irrigate distant cotton fields; this has greatly reduced the amount of water they carry to the Aral Sea, the area of which has shrunk to one third of its former size.

Kyzyl Kum flowers in early May

In winter and spring, when the snow cover is melting and from the rain, the sands soak. The capillarity of pure sands is weak, there are no upward currents. This humidity in the spring feeds ephemeral vegetation. In addition there is a second wet layer that does not disappear throughout the year, the moisture of which is used by shrub vegetation.

By the strange and diversified intermixture of races, dresses, and customs, the bazaars of Bokhara present a very striking spectacle to the eye of a stranjer. In the moving multitude most bear the type of Iran, and have their heads surmounted by a turban, white or blue - the former color being distinctive of the gentleman or the mollah, the latter the appropriate ornament of the merchant, handicrafts-man, and servant. After the Persian, it is the Tartar physiognomy that predominates. We meet it in all its degrees, from the Ozbeg, among whom we find a great intermixture of blood, to the Kirghis, who have preserved all the wildness of their origin. (..) This diversified chaos of Bokhariots, Khivites, Khokandi, Kirghis, Kiptchak, Turkomans, Indians, Jews, and Afghans is represented in all the principal bazars. Vambery
This section deals with the main monuments of Uzbekistan. The images below show some of its citizens. 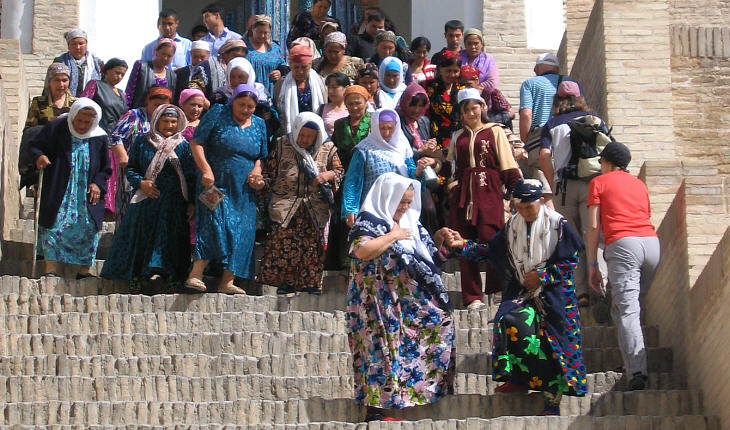 Enjoying the fountains of Samarkand

(left) Students at Samarkand (Italy is popular among them); (right) a Russian ethnic boy at Gour Emir Mausoleum in Samarkand

Sitting at an Uzbek table in Chir Dor Medrese in Samarkand, you may wish to see that used by the Persian Shahs at Isfahan

Having fun at a fair in Bukhara

(left) A new emir at Kourinich Khana (throne hall) in the fortress of Bukhara; (right) having fun at the Liab - I - Haouz garden in Bukhara

The image used as background for this page shows a statue of Timur as portrayed in an Uzbek banknote.