For centuries the name of Khiva struck terror into the Russian settlers whom the tsars had relocated to the east of the Volga River. They knew that Turkmen raiders who attacked their villages, as well as those of Persia, abducted the peasants and brought them to the slave market of that far away town, which lay beyond the vast Kara Kum (black sands) Desert.

Tach Darvoza (southern gate) and a nearby tower with tombs

I learned that a party of fifty Turkoman horse had yesterday passed under the walls of Towrone (in North-Eastern Persia), in the way to their own country. These fierce free-booters, who wage a common war on the Persians, enslave as well as plunder those who fall into their hands. To prevent an escape the captives are sent into the interior parts of the country, where they are employed in tending the numerous droves of cattle and horses with which Tartary abounds. They are also occasionally sold to the Kalmucks, the most rude and savaje of all the Tartar race (who lived further north). A slavery with these is spoken of with horror, and accounted worse than death.
George Forster - A Journey from Bengal to England, Through the Northern Part of India, Kashmire, Afghanistan, and Persia, and Into Russia by the Caspian Sea in 1782-1783
Khiva is located near the Amu Daria River and the land around the town was very fertile. However the tribes who lived in the region regarded farming as a humble occupation and preferred to raid Persian or Russian villages to employ their inhabitants as cheap labour in the fields. The harsh climate of the region and poor hygiene and living conditions greatly reduced the life expectancy of the abducted peasants; for this reason Khiva (and Bukhara) had a very flourishing slave market.

The rise of Khiva dates back to the XVIth century; before that period the most important town of Khorezm (the name of region) was (Old) Urgench. This town knew a great development in the XIIth century but, after having been razed to the ground in 1221 by the Mongols of Genghis Khan and by Timur in 1370, it was eventually abandoned. The Amu Daria River changed its course and this was another factor which led to the town's abandonment. Today Old Urgench is located in Turkmenistan, while a town by the same name was founded in the XVIIIth century twenty miles to the east of Khiva.

Walls south of Ota Darvoza (Western Gate); also in the image used as background for this page

The reader will easily imagine in what a state my spirits were when I found myself before the walls of Khiva, if he reflects on the risks to which any suspicion of my disguise would expose me, as soon as a first introduction should discover my European features (he travelled in disguise as a Sunni dervish returning from Mecca). I was well aware that the Khan of Khiva, whose cruelty was displeasing to the Tartars themselves, would, in case he felt any distrust, become far severer to me than the other Turkomans.
Arminius Vambery - Travels in Central Asia in 1863
In the XVIIth century Khiva became the capital of an independent Khanate (see map) and the imposing walls which surround Itchan Kala (Inner Town) were built in 1686-1688. In the following century Khiva had to face the revolts of several tribes and the Persian threat. In 1740 the Persians occupied Khiva and destroyed many of its monuments, which were rebuilt in the following years. In 1770 the power was seized by the Qungrat inaqs (royal advisors) who deposed the Khan in 1804 and ruled Khiva until 1920.

View of the western walls including those of Kouchna Ark

Fancy to yourself three or four thousand mud houses standing in different directions (..) and surrounded by a wall ten feet high, also made of mud, and you have a conception of Khiva. The city is divided into two parts: Khiva proper, and Itch Kale (Kouchna Ark), the citadel with its encircling wall, which can be shut off from the outer city by four gates; (..) The city, properly so called, has nine gates and ten mahalle (quarters). Vambery
Itchan Kala is the inner town (protected by brick walls some 10 m high) of the old Khiva oasis, which was the last resting-place of caravans before crossing the desert to Iran. Although few very old monuments still remain, it is a coherent and well-preserved example of the Muslim architecture of Central Asia.
From the UNESCO synthesis of the universal value of Itchan Kala, the Old Town of Khiva which in 2000 was added to the World Heritage List.
The high walls which surround the old town had also the objective of protecting it from desert storms, but Vambery did not describe them as high as they are today. Their wave-like design is fascinating and per sè it justifies the inclusion of Khiva in the UNESCO WHL.

Kouchna Ark and the walls seen from it

In 1717 Tsar Peter the Great sent an expedition to Central Asia to explore the region and identify a possible route to India. Prince Alexander Bekovitch-Cherkassy led the expedition; he was of Circassian origin (a region in Caucasia) and therefore familiar with Muslim traditions and Turkic languages. When he reached Khiva with 4,000 troops he was welcomed by the Khan who suggested his army be lodged in five different locations around Khiva for better foraging. In the following days the Russians were attacked and many of them were slaughtered while others were sold as slaves. According to a survivor's account Prince Bekovitch was flayed alive.
For more than a century no other Russian armies were sent against Khiva. In 1839 General Vasily Alekseevich Perovsky moved from Orenburg, a Russian military outpost, to attack the Khanate of Khiva and stop its slave market of Russian peasants. He chose the wrong period (November) to cross the frosty desert and was forced back by winter storms without having been able to reach Khiva. It was evident that in order to exploit their military edge over the Khanate army, the Russians needed more information. 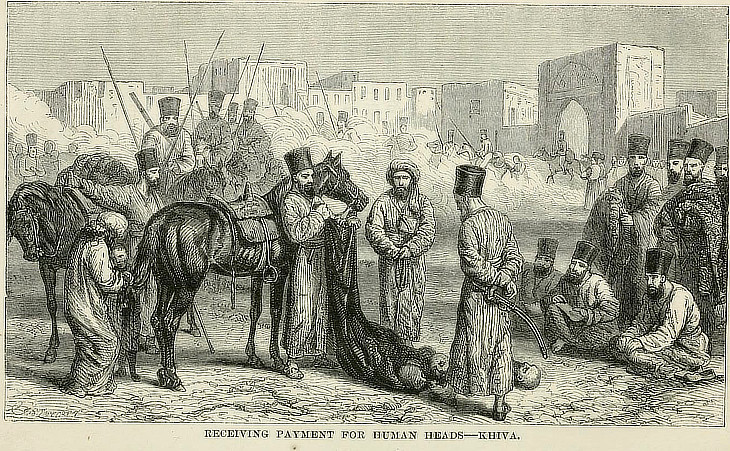 Illustration from Arminius Vambery - Travels in Central Asia in 1863

The treasurer was engaged in so singular an occupation that I must not omit to particularize it. He was assorting the khilat (robes of honor) which were to be sent to the camp to reward those who had distinguished themselves. They consisted of about four kinds of silken coats with staring colors, and large flowers worked in them in gold. I heard them styled four-headed, twelve-headed, twenty-headed, and forty-headed coats. As I could see upon them no heads at all, in painting or embroidery, I demanded the reason of the appellation, and was told that the most simple coats were a reward for having cut off four heads of enemies, and the most beautiful a recompense for forty heads, and that they were now being forwarded to the camp. Vambery

In 1858 Nikolai Pavlovich Ignatiev, a young Russian diplomat managed to reach Khiva and (of even greater importance) to safely return with first hand strategic information. In 1873 Russian troops moved towards Khiva from four different directions and the Khan had no other options than to accept the Russian protectorate. Similar to the Emirate of Bukhara, the Khanate of Khiva survived until 1920 when the Soviet army conquered the town. In 1924 Turkmen rebels made a failed attempt to seize Khiva. In that same year the Khanate became part of the Soviet Republic of Uzbekistan.

Although wood has always been rare, especially in the eastern parts of Uzbekistan, it was used for roofs and occasionally for columns, especially in mosques and palaces. Some of the best examples of wooden architecture are in Khiva and include carved wooden columns with muqarnas capitals and bulbous lotus bases resembling lotus buds. Wooden ceilings are often painted.
Andrew Petersen - Dictionary Of Islamic Architecture - 1996
The continental climate of Khiva required different facilities for coping with extreme cold and hot weather. In summer in Kouchna Ark both receptions and prayers took place in porticoes facing north; their height granted some circulation of air while their positioning kept them in the shade. The throne hall and the mosque were built in the first half of the XIXth century.

The place of the architectural heritage of Itchan Kala in the history of Central Asian architecture is determined not only by the abundance of surviving architectural monuments, but also by the unique contribution of Khorezmian master builders to Central Asian architecture and preservation of its classical traditions. The domestic architecture of Khiva, with its enclosed houses with their courtyard, is also an important attribute of the property that can be studied in its 18th- and 20th-century morphological variants. UNESCO
The Khans had several residences in Khiva, but that on Kouchna Ark (old citadel) next to the western gate was the safest one. It included a high bastion (Akcickh-Bobo) from which they controlled what was going on in the whole town.