in Central Asia - Samarkand - p. 2
(detail of a decoration at Abdoul Aziz Khan Medrese in Bukhara)

You may wish to see an introductory page or page one first.

Outside the city is the grave of Qutham ibn al-' Abbas, who met a martyr's death at the conquest of Samarqand. The inhabitants go out to visit it every Sunday and Thursday night and the Tatars also visit it, bringing large votive offerings of cattle, sheep and money, which are used for the maintenance of travellers and of the guardians of the hospice.
H. A. R. Gibb - Selection from the Travels of Ibn Battuta in 1325-1354

Shah-e Zinda: general view; you may wish to see similar buildings at Ardabil in Persia

They enumerate here several hundred places of pilgrimage, but we will only particularize the more remarkable: Hazreti Shah Zinde. The proper name is Kasim bin Abbas. He is said to have been a Koreishite, and consequently stands here in the highest repute, as the chief of those Arabs who introduced Islamism into Samarcand. His sepulchre lies without the city, to the northwest, near the wall. (..) All these structures are situate upon elevated ground, and are approached by an ascent of forty tolerably broad marble steps.
Arminius Vambery - Travels in Central Asia in 1863
According to tradition Koussam-ibn-Abbas, a first cousin of Prophet Muhammad, brought Islam to the region. He convinced the inhabitants of Samarkand not by the sword, but by his holy deeds. One day when he was very old he descended into a well which is thought to be the entrance of an underground palace where he is still alive. In the following centuries a mosque and a mausoleum where built on the site where he disappeared at the top of a hill. Shah-e Zinda bears a reference to this account: the Living King.
In 1434-1435 Ouloug Beg, grandson of Timur, built a gigantic portal at the foot of the hill and a series of terraces which made the access to the mausoleum easier.

Ordinary residences and businesses were relocated from the hill and many other tombs were built. The first erected ones cluster around the mausoleum and later structures descend the southern slope in a long string. The site received increased attention in the XIVth century and Timur buried many of his female family members there. The decoration is mainly based on glazed tiles; their colours span over all tones of blue. Unlike the medreses of Registan or that of Bibi Khanoum, the mausoleums, owing to their smaller size were not extensively damaged by earthquakes and other factors, yet an excessive restoration has weakened their evocativeness.

An unknown emir built the so called Emir Zade Mausoleum. The portal in addition to tiles is decorated with reliefs and carved glazed terracotta.
Chadi Moulk Aka is the first mausoleum built during reign of Timur. An inscription on the portal notes in Arabic that Turkan Aqa (Timur's older sister) built this well preserved mausoleum for her daughter Chadi Moulk who died in December 1371.

A precious pearl was lost here is the mourning epitaph dictated by Turkan Aqa for her daughter.
Chirin Bika Ata was another sister of Timur; her mausoleum was built at a later date. The deep muqarnas, a system of projecting niches above the doorway which has the appearance of a honeycomb, marks a change from previous patterns.
Muqarnas is one of the most characteristic features of Islamic architecture and is used throughout most of the Muslim world. Muqarnas is usually associated with domes, doorways and niches, although it is often applied to other architectural features and is sometimes used as an ornamental band on a flat surface.
Andrew Petersen - Dictionary Of Islamic Architecture - 1996

Tiles with reliefs, carved terracottas, majolica mosaics show the variety of techniques which were used to enrich the decoration. An early example of this approach can be seen in the Mausoleum of Oljeitu at Soltaniyeh which was completed in 1313. 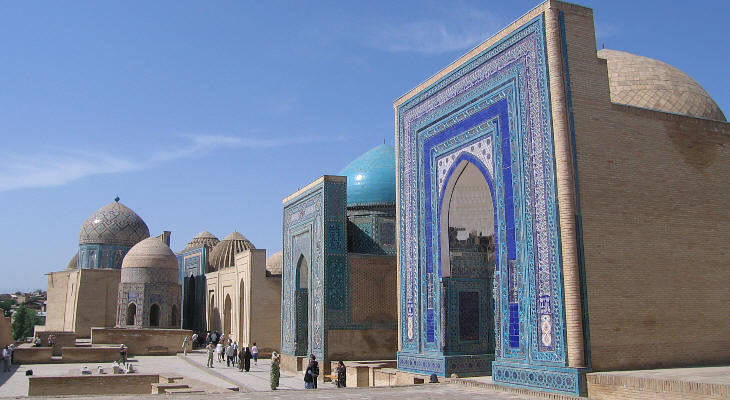 The mausoleums were built on both sides of a passage which actually did not allow the viewer to properly observe their design and decoration. In the central part of the necropolis some buildings have fallen, thus allowing a better view of the remaining mausoleums. Strangely enough, considering the large use of inscriptions as a decorative pattern, the names of the people buried in most mausoleums are unknown.

Alim Nasafi was the architect of this mausoleum; the inscriptions he placed in various points of the portal were not exclusively praising Allah and his Prophet; they included sentences such as: There is true friendship only in dreams and There is nothing man can build, which is not going to vanish.

One of the finest mausoleums was built for Touman Aka, Timur's youngest wife; the inscription above the entrance is a Memento Mori, as it reminds that the tomb is a gate that everyone will enter.
The mausoleum of Khodja Akhmad is among the oldest ones and it provided a pattern for those which were built later. The portal is surrounded by a gigantic inscription; similar inscriptions, but in relief, can be seen on the portals of many Seljuk medreses in Anatolia, e.g. at Sivas. 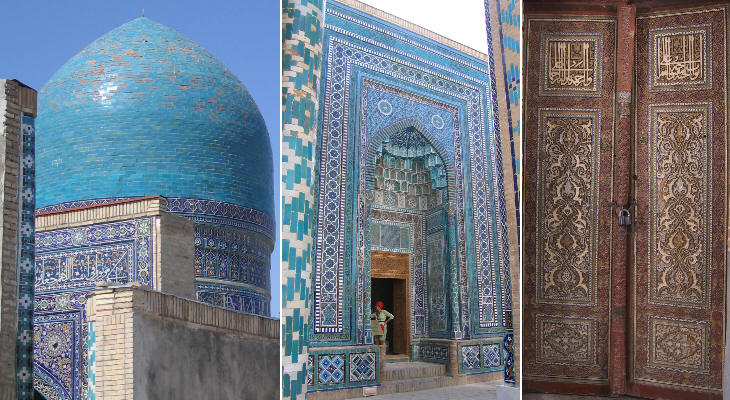 Koutloug Aka was another of Timur's wives and she was buried in a mausoleum facing that of Touman Aka; these mausoleums were preceded by a 1495 tchortak, a small portico open on both sides. Here a very finely decorated door leads to the mausoleum where Koussam-Ibn-Abbas is buried (although this contradicts the traditional account which says that he is still alive).

On reaching the summit, one is conducted to a building lying at the end of a small garden. Here several little corridors lead to the gloomy tomb of the saint. Vambery
PS: the names of Uzbek locations and people are transliterated into western languages in a variety of ways. This is because the original Arab alphabet was replaced by the Cyrillic one which very recently has been replaced by the Roman alphabet. To give an example an alternative English spelling of Shah-e Zinda is Chah-I-Zinda.

Return to Samarkand - page one or move to page three: Bibi Khanoum or to:
Introductory page
Bukhara
Chakhrisabz
Khiva