HINC SEPTEM DOMINOS VIDERE MONTES ET TOTAM LICET AESTIMARE ROMAM (from this point you can see the seven hills and appreciate Rome in its entirety), these verses were written by the Roman poet M. V. Martial (Book 4, Epigram 64) in the 1st century AD and Giuseppe Vasi engraved them in his 1765 Grand View of Rome assuming Martial was referring to the Janiculum: as a matter of fact it seems he had in mind Monte Mario, a hill far apart from the centre of Rome, from which it is possible to have an overall, but not very detailed view of the city. Through the centuries painters and engravers have chosen different points for their views of Rome. 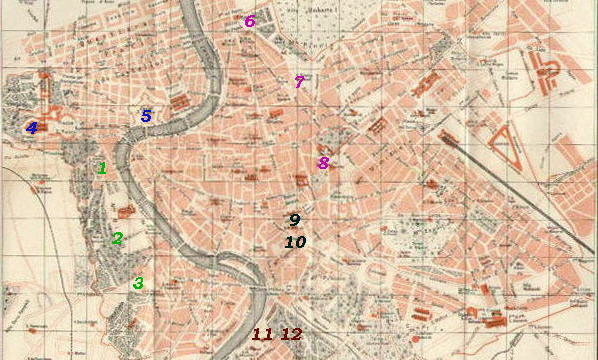 The Janiculum (green numbers) provides an excellent view over most of papal Rome and Trastevere, but not over S. Pietro which is behind the hill. The dome of the great basilica and the top of Castel Sant'Angelo (blue numbers) offer interesting views over the northern part of Rome and the same applies to the viewpoints on the Quirinal hill (magenta numbers) which provide excellent views of the Vatican. The Capitoline hill (black numbers), either from the Monument to Vittorio Emanuele or from the terraces of Palazzo Caffarelli is the sort of modern tower from which, section by section, one can see the whole city; finally the Aventine hill (maroon numbers) has nice views towards papal Rome (Rocca Savella) or the Palatine hill (Roseto di Roma).

The signature of the (not ratified) 2004 European Constitution in Palazzo dei Conservatori had the indirect effect of accelerating the reopening of a nice terrace which offers a striking view over most of the domes of Rome.

The museum located in the two twin palaces of Piazza del Campidoglio was recently expanded to include the adjoining Palazzo Caffarelli and its terrace now houses the museum cafeteria.

The first public gardens were designed at the beginning of the XIXth centuries by the French authorities and they were completed by Pope Pius VII; they included a wide terrace overlooking Piazza del Popolo (the image shows the tip of its obelisk) and with the an excellent view of the Vatican. The wealthiest families very often had a private terrace in the form of a loggia from which they could enjoy a view over Rome. This facility adds a lot to the value of the house especially for those who entertain a great deal, either because they like it or because it is required by their job. 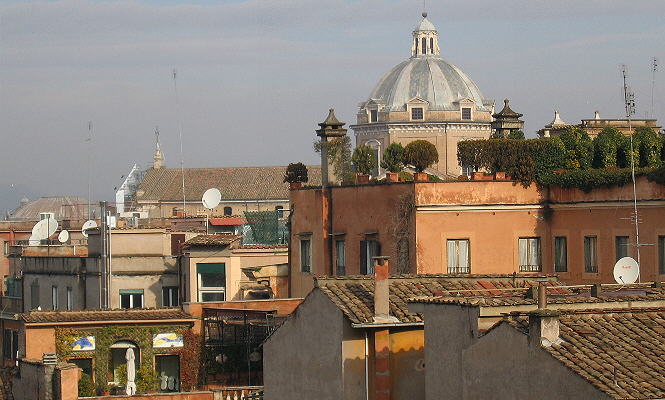 In 1870 Rome became the capital of the Kingdom of Italy and in a matter of few years its population doubled. To accommodate the newcomers the owners of historical palaces were allowed to build an additional storey slightly smaller than the existing ones and in part hidden by the cornice or by the projecting roof. In many cases the owners took the occasion for providing the new apartments with terraces, which often were turned into small hanging gardens.