Links to this page can be found in Book 2, Day 4 and Rione Colonna. 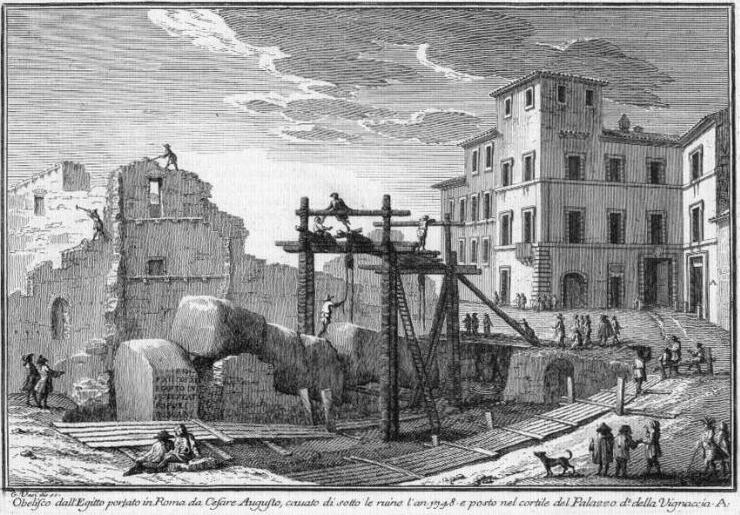 We were told of an obelisk lying in the Campus Martius under a row of houses, as big if not bigger then any of those already erected, and supposed to continue entire and unbroken.
John Ray - Observations (..) made in a journey through part of (..) Italy in 1663
In the text accompanying Plate 21 covering Piazza del Popolo Giuseppe Vasi described at length the obelisk which Pope Sixtus V placed there in 1589. He added an extra-plate to show another obelisk which at the time (1752) he was publishing his etchings was the subject of a lot of discussions as to where it should be placed. This obelisk was excavated in 1748 when some small houses behind Palazzo di Montecitorio had to be pulled down to make room for a building belonging to the Augustinians; its existence was known since the end of the XVth century. The obelisk was found broken into five major pieces, but parts of it were missing or were damaged by thermal stress caused by fire.
The plate shows the machinery built to raise the blocks and a sort of track to move them; one of the blocks shows the dedicatory inscription dictated by Emperor Augustus (you can see it in the image used as background for this page); the plate shows also the buildings which were being pulled down (left) and Palazzo della Vignaccia (right), in the courtyard of which the broken obelisk was temporarily moved. 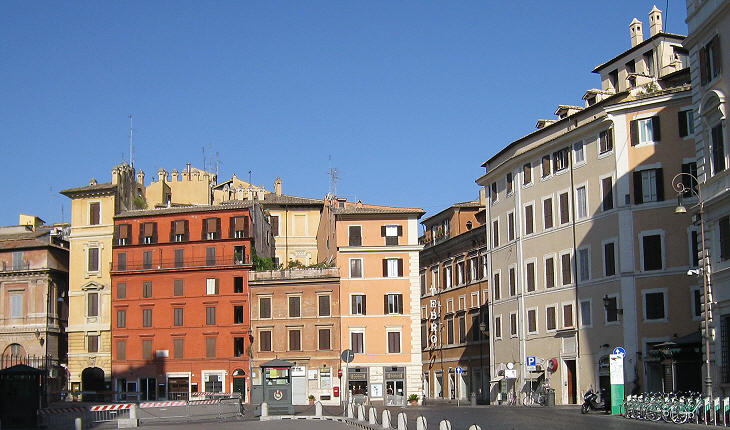 In the early XXth century the area shown in the plate was largely impacted by the enlargement of Palazzo di Montecitorio which from 1871 houses Camera dei Deputati, the Lower Chamber of the Italian Parliament. Palazzo della Vignaccia (also known as Palazzo Poli di Campo Marzio) was pulled down; the Augustinian building is on the right side of the image.

(left) 1893 reconstruction by Rodolfo Lanciani of the location of Horologium Divi Augusti (the church on the right side of the butterfly shaped area is S. Lorenzo in Lucina); (right) 1748 inscription on the Augustinian building which was placed by Pope Benedict XIV to celebrate the excavation of the obelisk

Psammetichus II, a pharaoh who lived in the early VIth century BC erected two tall obelisks in Heliopolis; it is generally thought that they were knocked down by the Persians when Cambyses II, son of Cyrus the Great, conquered Egypt in 525 BC. In 10 BC Emperor Augustus ordered the relocation of one of the obelisks to Rome as a symbol of the conquest of Egypt; the inscription says Aegypto in potestatem Populi Romani redacta (Egypt was placed under the rule of the Romans). Augustus however paid tribute to the conquered country by dedicating the obelisk to the Sun, the highest Egyptian deity.
The Romans were fascinated by the advanced astronomical knowledge of the Egyptians and Julius Caesar gave his name to a calendar which was based on the Egyptian one; Augustus, adoptive son of Caesar, utilized the obelisk as the gnomon of a gigantic sundial; the globe placed at its top projected its shadow on a large paved square where bronze marks indicated the corresponding hours of the day and days of the year. It was placed in a position which made its shadow reach Ara Pacis, the altar dedicated to Peace built by Augustus in that same year, on September 23, the Emperor's birthday.
The accuracy of Horologium Divi Augusti, the name given to the sundial, did not last long; Pliny the Elder noted in his Historia Naturalis (Book XXXVI:15) that its data were no longer reliable and he indicated the impact of floods on the stability of the obelisk among the most likely causes of this deterioration.

The mighty obelisk which, raised by Augustus on the Campus Martius to serve as a sun-dial, was now lying in fragments, inclosed by a wooden paling in a filthy corner awaiting the bold architect who might be called to set it up again. It is hewn out of genuine Egyptian granite and thickly besprinkled with neat naive figures, though in the well-known style. Standing, as we did, beside its pinnacle, formerly piercing the higher strata of air, we thought it remarkable to see on the tapering slopes the prettiest images of sphinx after sphinx, a sight in earlier times allowed to no human eye, but only to the beams of the sun.
J. W. Goethe - Italian Journey - September 1787 - translation by Charles Nisbeth.
In 1748 many thought that Pope Benedict XIV would have re-erected the obelisk in the forthcoming 1750 Jubilee Year, yet it remained in the courtyard of Palazzo della Vignaccia until 1789 when Pope Pius VI decided to place it in front of Palazzo di Montecitorio; parts of a broken granite column erected in honour of Emperor Antoninus Pius, which also were found in the XVIIIth century in the same area, were used to complete the obelisk. You may wish to see a page showing all the obelisks of Rome. 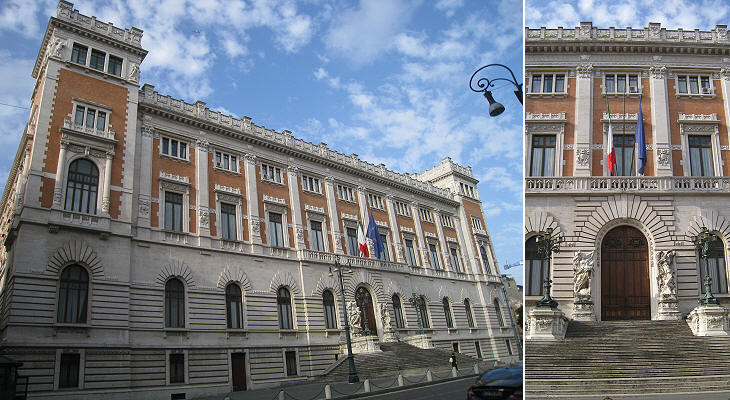 Between 1908-1918 Palazzo di Montecitorio was enlarged and its rear side was given a grand façade designed by Ernesto Basile, an architect known for many buildings in Palermo; unfortunately the new façade does not fit the Roman urban context. 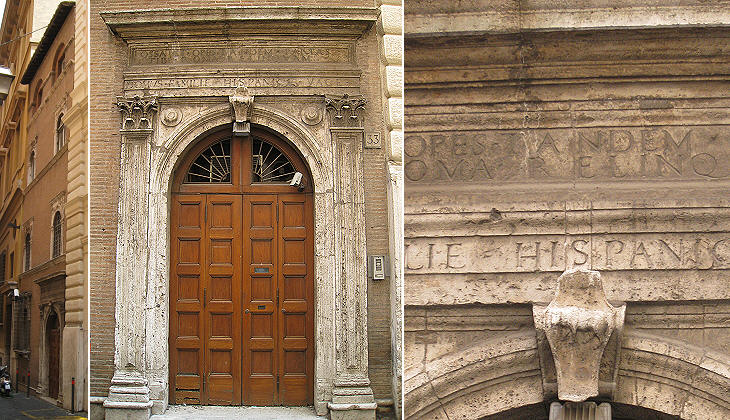 Many buildings near Palazzo della Vignaccia were demolished to obtain space for the enlargement of Palazzo di Montecitorio. The Renaissance façade of one of them was reassembled in the street behind S. Lorenzo in Lucina. It belonged to Don Pedro de Vaca, a Spanish nobleman from Valencia who came to Rome maybe called by Pope Alexander VI, who also was from the region of Valencia; as a matter of fact his coat of arms (a cow) is very similar to that of the Pope (Vaca, Italian vacca, means cow). The space between the windows was most likely painted. Above the entrance Don Pedro de Vaca wrote a sort of will: Ossa et opes tandem partas tibi Roma relinquam - My bones and my assets, which cost me a lot of effort, I leave to you Rome.

Next plate in Book 2: Piazza Colonna.
Next step in Day 4 itinerary: Chiesa dell'Immacolata Concezione in Campo Marzio.
Next step in your tour of Rione Colonna: Palazzo Fiano.