For those who make the desert bloom there is room for hundreds, thousands, and even millions.
David Ben-Gurion - Israel's first Prime Minister - 1954. 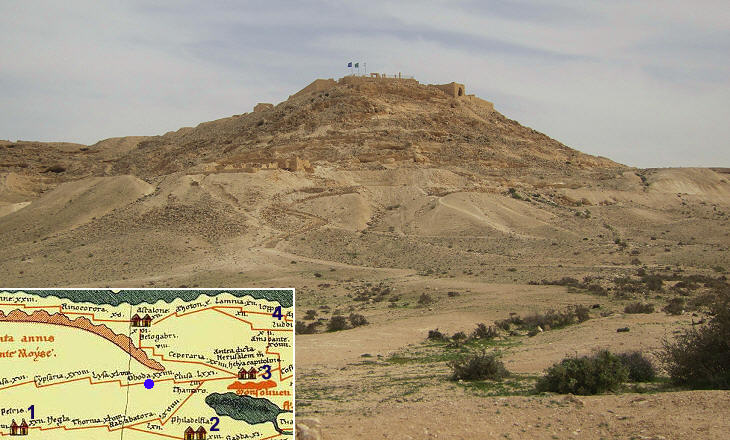 David Ben-Gurion is buried at Sde Boker, a kibbutz a few miles north of Oboda, where he spent his last years. The ancient town of Oboda was evidence to him that in antiquity the Negev Desert had housed sizeable towns, although, at the time Ben-Gurion spoke, Oboda had not been entirely investigated by archaeologists. 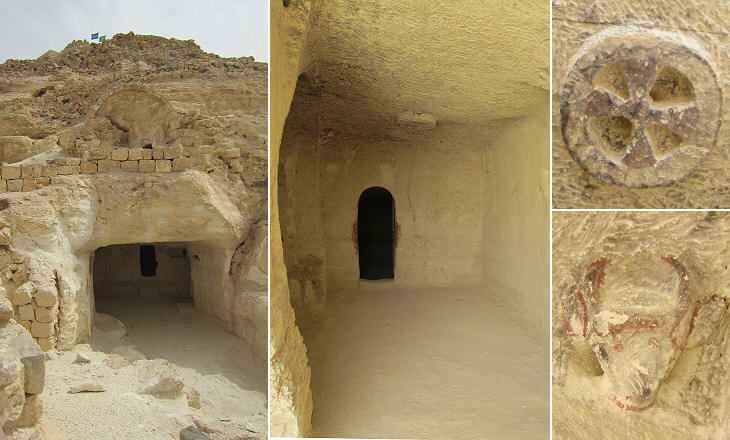 House with storage rooms dug into the rock and small reliefs

Archaeologists have identified three periods of occupation of the town; by the Nabateans in the early Ist century AD (it was named after Obodas, a deified Nabatean king); by the Romans when a military camp was built outside the town and in the Vth/VIth century when two large churches were built at the top of the hill.
The rocky area was most likely excavated during all these periods to obtain storage rooms. 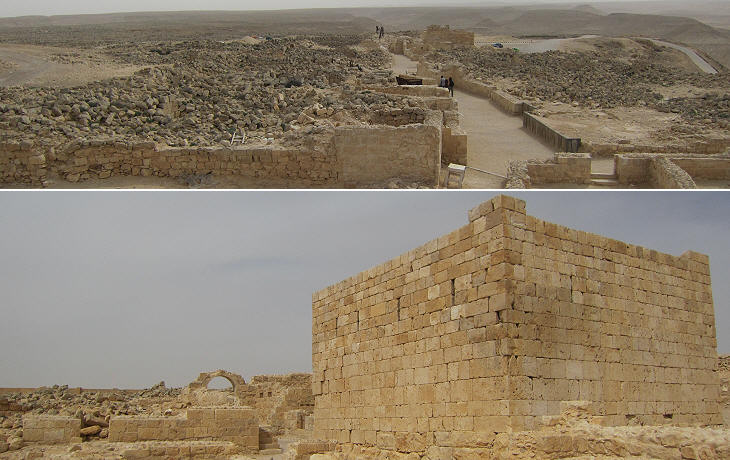 (above) View of the residential quarter; (below) tower built in the late IIIrd century

Oboda was located on an important trade route used by merchants who carried frankincense and myrrh from Arabia (probably today's Yemen) to Mediterranean Sea ports (more on this subject in a page covering Mamfis, another Nabatean town). This trade constituted an important resource for the Nabatean Kingdom, the territory of which comprised much of today's Jordan and the Negev. The economy of Oboda relied on farming too; five wine presses have been found which indicate that vineyards surrounded the town. The residential quarter of Oboda was designed along a straight main road. Some details in the way its buildings collapsed have led archaeologists to believe that the decline of the town was caused by earthquakes. 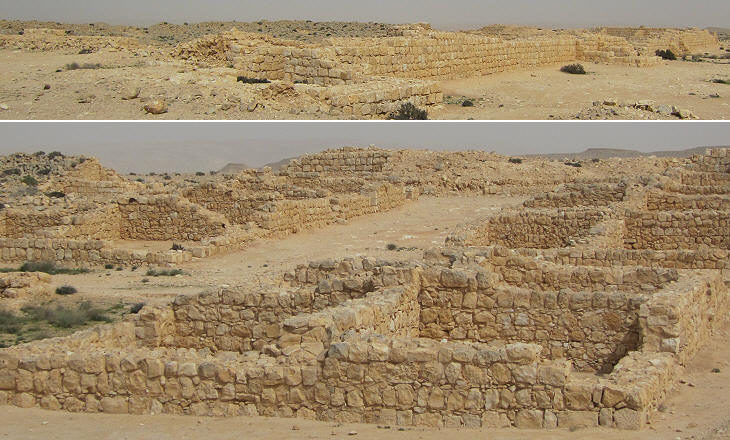 "Castrum" (Roman military camp): (above) overall view showing that there were three towers on each side; (below) interior of the camp

In 106 AD Emperor Trajan annexed the Nabatean Kingdom to the Roman Empire. This occurred almost peacefully after the death of King Rabel II. It became the province of Arabia Petraea, Petra having been the historical capital of the Nabateans, although at the time of the annexation King Rabel resided at Bosra in today's southern Syria.
The northern part of the new province was subject to attacks by the Parthians, whereas the southern one was subject to raids by nomadic desert tribes. The recent discovery of a castrum outside Oboda indicates that the town housed a permanent Roman garrison, not so much for the defence of Oboda itself, but as the starting point for retaliatory expeditions on the nomads. 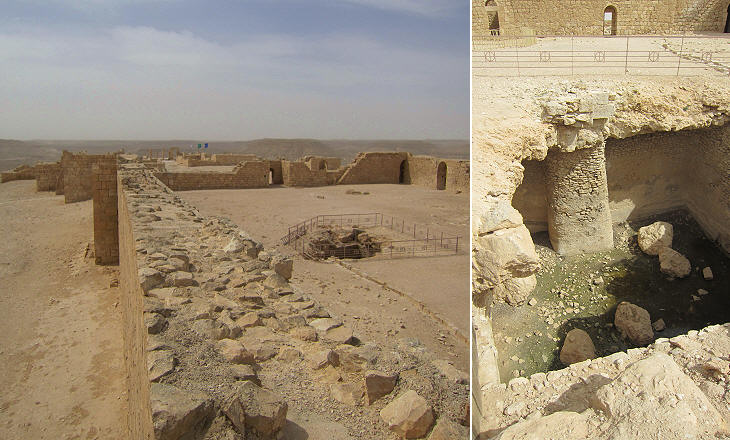 Fortified area and cistern at its centre

The Nabatean/Roman upper town had temples to the pagan gods and most likely to Oboda/Zeus, but its current aspect is basically that which the Byzantines gave it in the late Vth/early VIth century. The acropolis was fortified by a high wall and some small towers. At its centre a large cistern ensured the defenders could rely on a lasting supply of water. 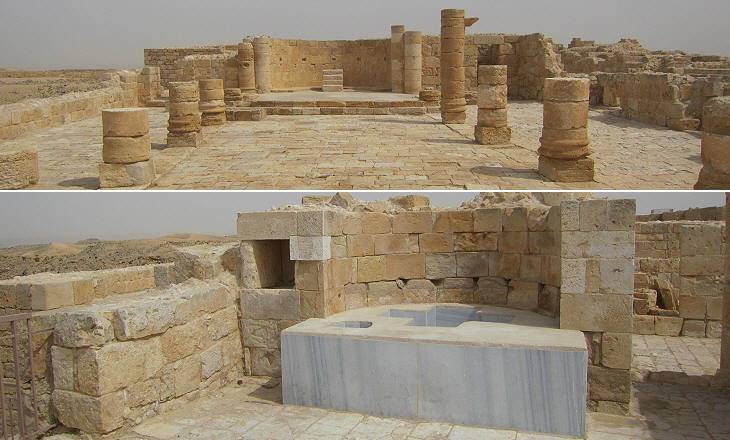 Northern church: (above) interior; (below) baptistery with a cruciform font

A large terrace outside the fortress houses two large churches, one of which was part of a monastery. The northern church is thought to have been used by the Bishop of Haluza, an ancient town near today's Gaza Strip, when visiting Oboda. 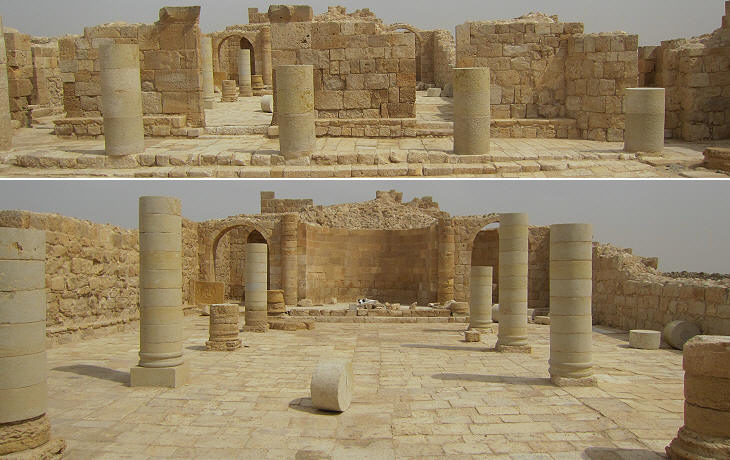 Southern church: (above) courtyard; (below) interior

The southern church has the typical shape of a Roman basilica with three naves and an apse at the end. It was preceded by a courtyard surrounded by the cells of the monks. The courtyard was also the location from which catechumens (adults who were receiving religious instruction, but were not yet baptized), attended the ceremonies which took place inside the church. 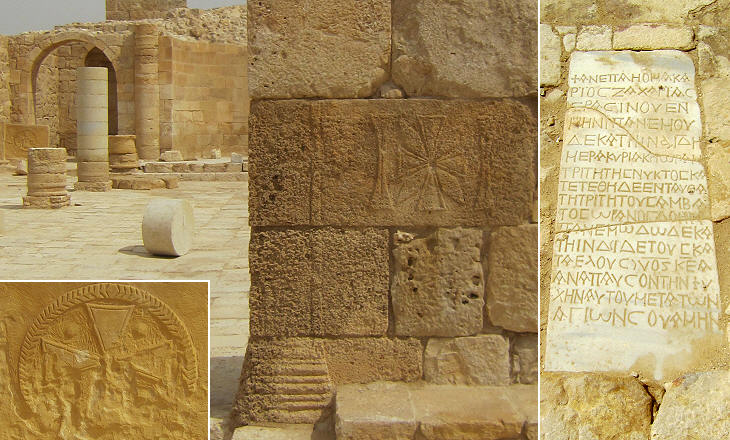 Several tombstones dating 541 to 618 have helped fixing the time the church was built and utilized and they support the opinion that the town was abandoned before the Arab conquest of the region in 634. The shape of the crosses as well as the use of Greek in the tombstones show how much Oboda was part of the Byzantine world.

Details: (above) an engraved lintel, probably from a temple; (below-left) a Nabatean inscription in the Aramaic alphabet which was used at Palmyra too and was similar to the Phoenician/Punic one (see an inscription at Leptis Magna); (below-right) a Greek inscription in a typical Roman frame

Although the majority of inscriptions and reliefs belong to the VIth century, archaeologists have found some memories of the previous periods of Oboda's history. 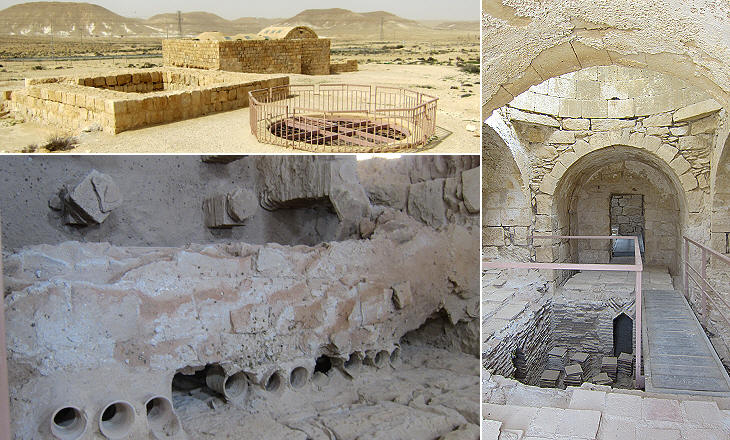 Baths have not been found in the acropolis or in the residential quarter. Perhaps they were destroyed by an earthquake and were not rebuilt. The small baths found at the foot of the hill were far from the main settlement and inconvenient to reach. They were probably a facility meant for the merchants who travelled along the trade route which did not cross the town. 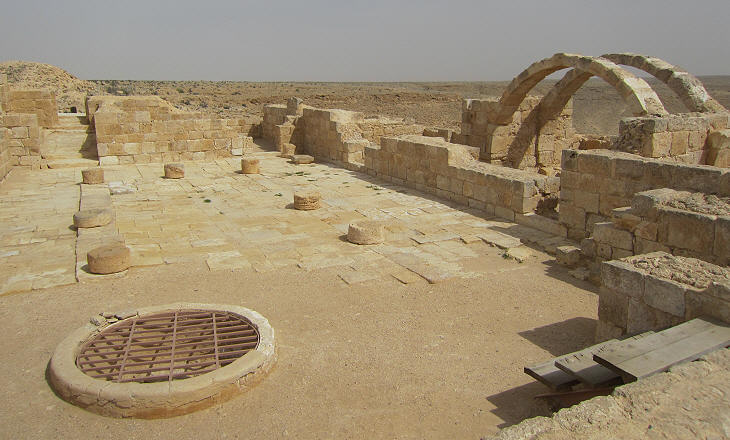 At least for some time during the Nabatean and Roman periods living outside the main settlement did not constitute a risk. A villa built around a courtyard stands on a hill opposite Oboda. Unfortunately this and the other monuments of the town have lost the mosaics which most likely decorated their floors and which have been found at other locations of the region such as Kissufim, in the north-western part of Negev. 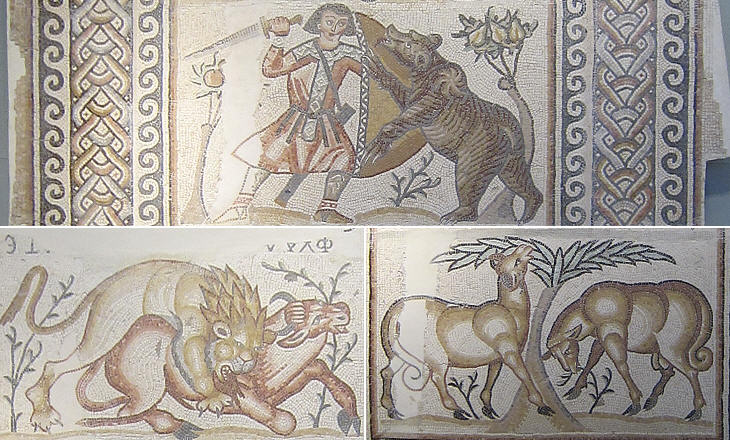 Museum of Israel: mosaic found at a church at Kissufim

The image used as background for this page shows a relief with a geometric pattern found at a house along the path to the acropolis.