In the XIXth century the actual location of Megiddo was unknown, although the town was mentioned many times in the Bible. Kings 1 - 9:15 says that it was founded by King Solomon at the same time he built the Temple at Jerusalem. 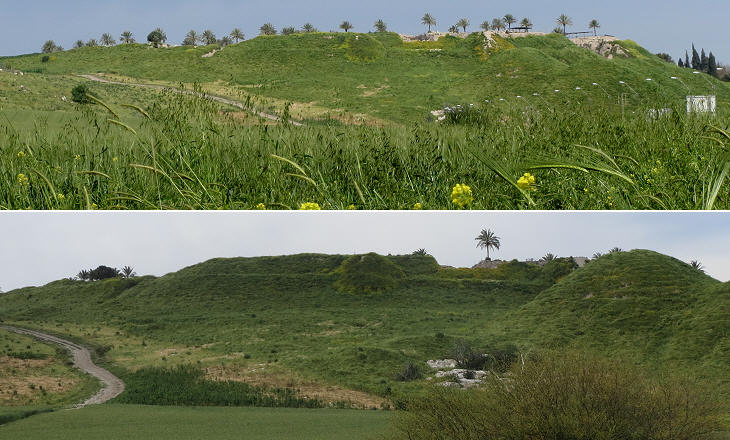 Other Bible quotations and Egyptian records indicated that the town was located at the southern end of Jezreel Valley and it controlled the access to a pass which led to the coastal strip. It was therefore situated on the main route between Egypt and Syria. Initially Megiddo was identified with some ruins near the Arab village of Lajun, but these were eventually found to be those of the permanent camp of Legio Ferrata, a Roman legion.
At the beginning of the XXth century a mound not far from Lajun attracted the attention of German archaeologists who came to the conclusion that they had found Megiddo. Other excavations by American archaeologists in 1925-39 led to the identification of several layers of buildings dated from the Bronze Age to the VIIth century BC.
The size and the overall appearance of the mound call to mind Ain Dara, a Hittite town in northern Syria. 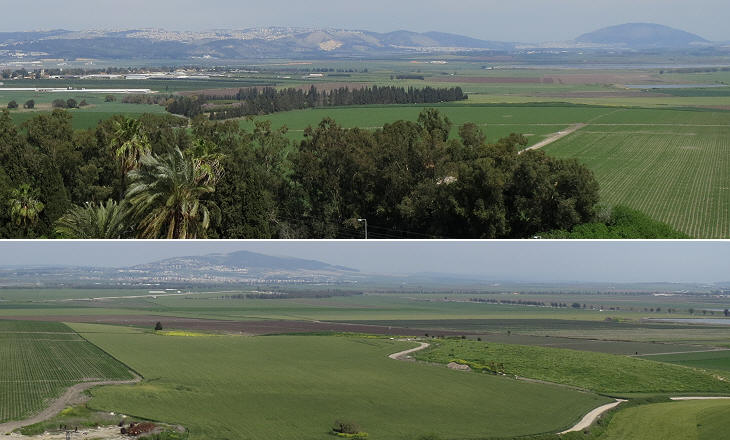 Views from Megiddo: (above) across the Jezreel Valley towards Nazareth and Mount Tabor; (below) eastwards

The mound enjoys a commanding view over the Jezreel Valley and advancing enemies would have been easily detected, so the towns which were built on the mound through the centuries had mainly a military purpose. The Egyptians used Megiddo as an outpost to prevent the invasion of their country. 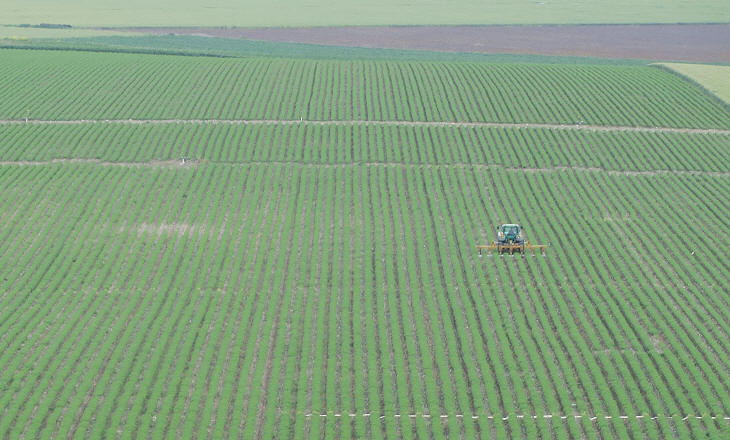 The site of Armageddon

Because Megiddo was mentioned in the Old Testament in association with many battles, the Book of Revelation (16:16) says that the kings will gather at Armageddon (Megiddo) for the final battle. Today the plain at the foot of Megiddo does not suggest apocalyptical thoughts at all, thanks to its advanced farming.
On a side note you may wish to see the cave at Patmos where St. John the Evangelist wrote the Book of Revelation, the most unlikely place to think about the end of the world. 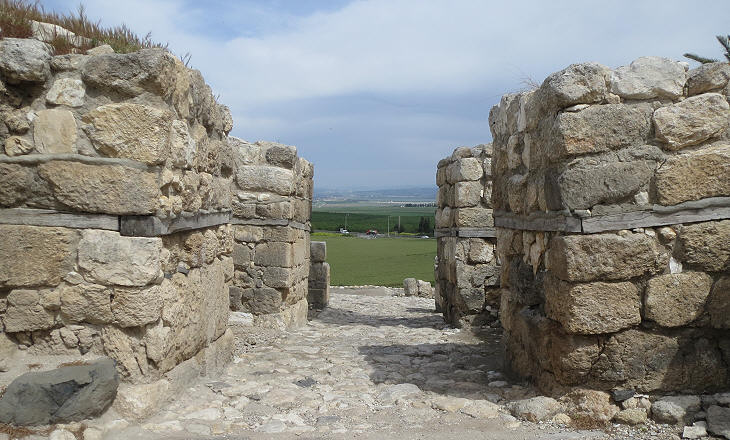 Late Bronze Age gate; the section above the grey line is reconstructed

Archaeologists found the foundations of buildings belonging to different periods. In some parts they stopped at a layer dated VIIIth century BC when Megiddo was the main town of an Assyrian province, in others they reached the Bronze Age level. The building which is best preserved is a Late Bronze Age gate, the remaining walls of which have a height of three feet. 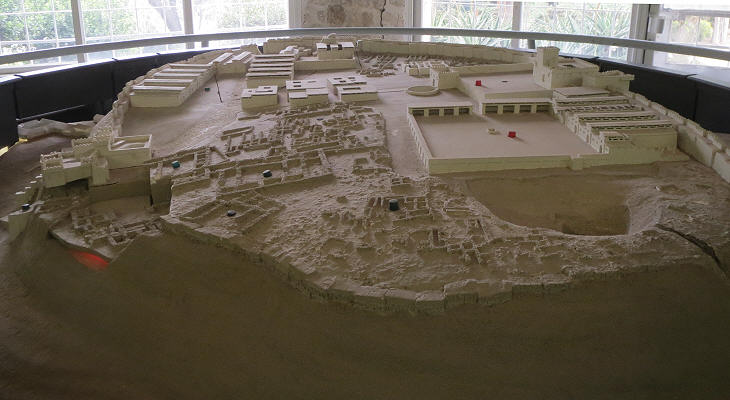 Some models offer a reconstruction of the aspect of Megiddo during its heyday in order to allow visitors to better understand the significance of the ruins of the archaeological site. 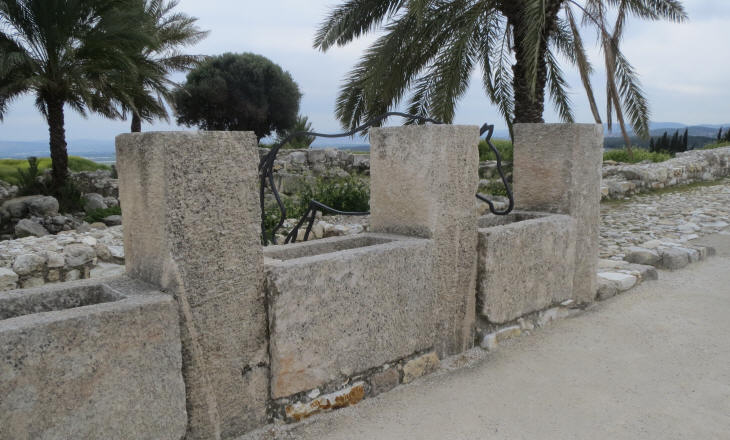 Reconstruction of the stables

The most striking discovery made by the archaeologists was the identification of two large stables which together occupied a significant part of the town. Not all archaeologists believe they were stables and they suggest they were warehouses or barracks at least in part. The horses were not used by cavalrymen, but by charioteers. 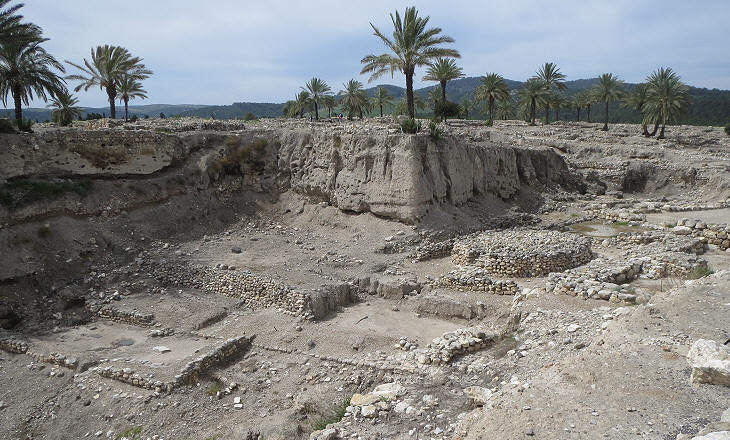 The foundations of several temples were found in the eastern part of the town. They faced the rising sun, a typical orientation for ancient temples. In order to reach this layer, archaeologists dismantled a fortress-like temple built above those shown in the image. When to stop excavating is always a difficult decision. 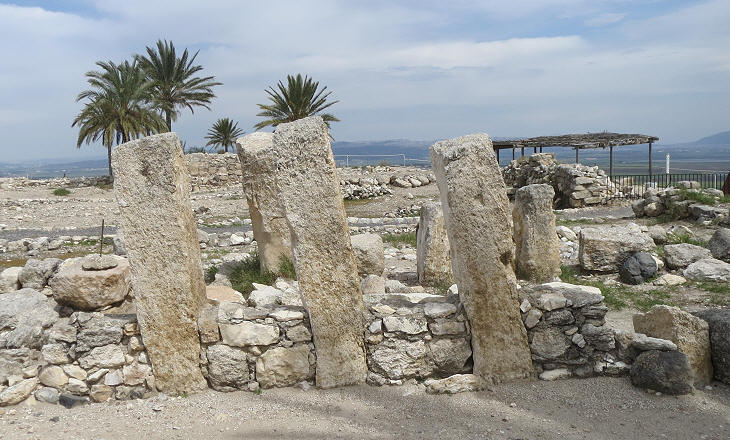 The excavations did not yield a lot in terms of decorative elements, even in the simple form of moulded stones and yet the town was for many centuries a possession of the Egyptians who have left statues and inscriptions at other locations of the region (e.g. Scythopolis). Maybe this is due to the military character of the town. The image used as background for this page shows one of the few decorated stones found at Megiddo, maybe a capital. 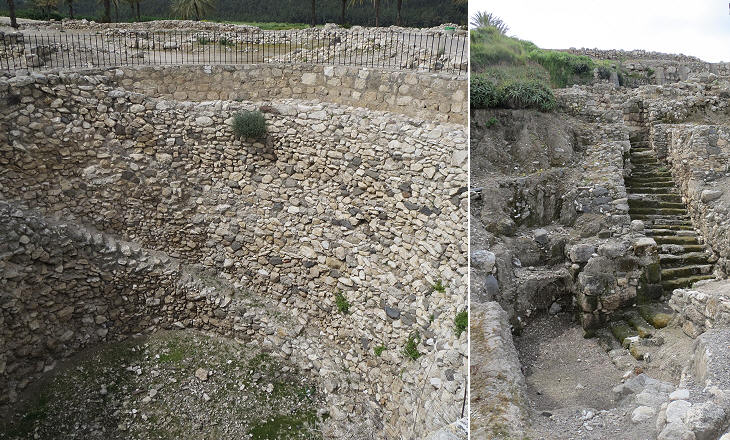 Because today the mound of Megiddo is only slightly above the level of the surrounding ground it is difficult to believe it could withstand a long siege and yet Egyptian chronicles say it was besieged by Pharaoh Thutmose III for seven months before being seized. The presence of a large granary and of a very impressive "hole" to reach a spring (see image below) indicate that Megiddo was actually equipped for sustaining long sieges. 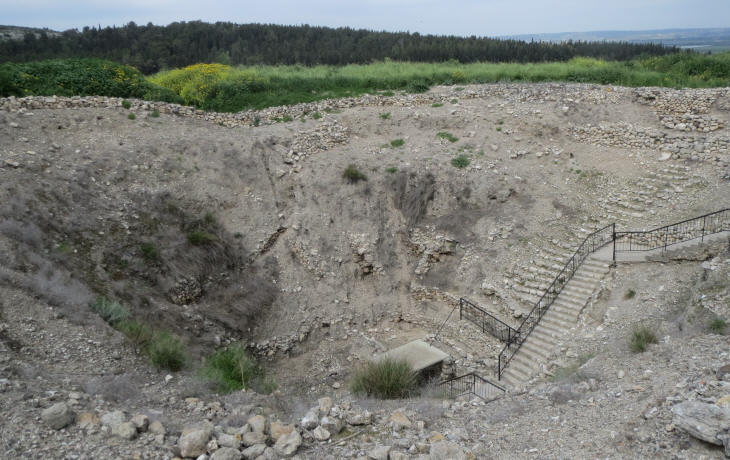 "Hole" which led to a hidden spring

Megiddo was completely abandoned in the IIIrd century BC, probably because developments in warfare techniques, such as the employment of cavalry rather than chariots and the use of more powerful siege machinery made it less relevant from a military viewpoint.