Città della Pieve
(Detail of the Cathedral of Orvieto) 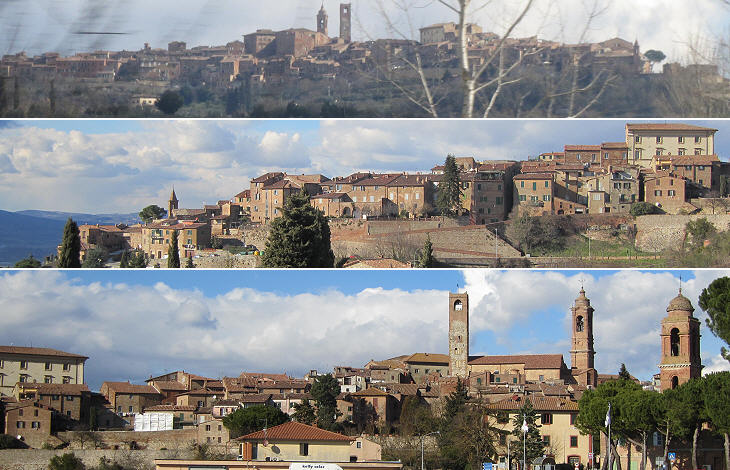 Città della Pieve is situated at the top of a hill on the eastern side of Val di Chiana. The town originated from a fortified settlement around a pieve, a rural church where baptism was administered. That of Città della Pieve was founded in the VIIth century when Italy was divided between Longobard and Byzantine territories. In the structure of the Longobard system of government, a pieve (from Latin plebs) was a territorial division of the plebeians i.e. the natives. Città della Pieve was therefore a Longobard possession near the border with the territory of Perugia which belonged to the Byzantines. Poor or good relations with Perugia characterize the history of Città della Pieve. 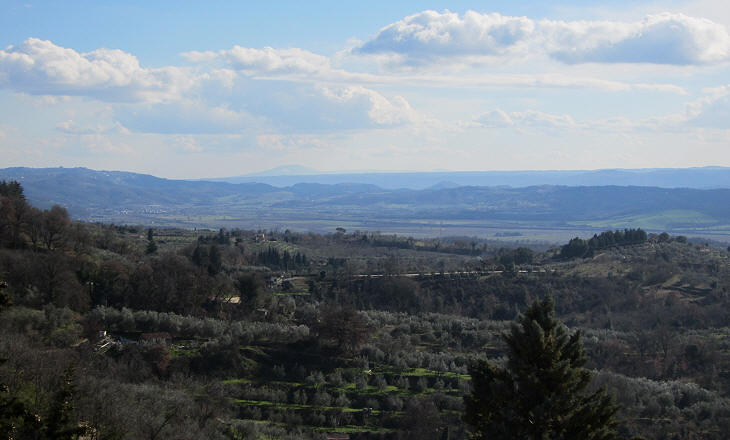 View of Val di Chiana towards Mt. Cimino in northern Latium; you may wish to cross the valley and make an excursion to nearby Chiusi

The road is full of beauty. It ascends a steep and lofty height covered with wood, and from the summit commands a magnificent view over the vale of the Chiana - La Pieve with its twin towers, like horns bristling from the brow of the long dark hills which stretch up from the south - Chiusi, nearer the eye, on a rival height - the intervening valley, with its grey and brown carpet of olive and oak woods - the lakes gleaming out bluely in the distance - and the snowy Apennines billowing along the horizon.
George Dennis - The Cities and Cemeteries of Etruria - 1848
In the XIth century the inhabitants of Orvieto built a dam on the Chiani, a small stream which carried southwards the excess water of Val di Chiana. The dam had a lasting impact on the environment because it caused the development of unhealthy marshes in the valley. The population of Città della Pieve, which for its high position (1,667 ft) was not affected by malaria, grew substantially. 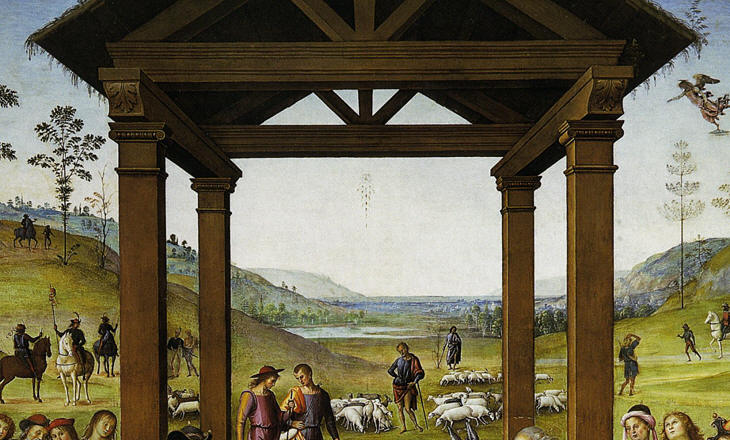 The town is clean, though poor. Its chief interest to the traveller is derived from its being the birthplace of Pietro Perugino. In the oratory of Santa Maria de' Bianchi is one of his finest frescoes. It represents the Adoration of the Magi; the Madonna and Child are sitting under a shed, receiving the offerings of the wise men. (..) A rich landscape with horsemen and various figures forms the background.
John Murray - Handbook for travellers in central Italy - 1853
Pietro Vannucci is known as il Perugino because he studied painting in that town, but he was born at Città della Pieve. He became one of the most famous Italian Renaissance painters and Raphael was one of his assistants. The landscape backgrounds of many of his paintings depict views of Val di Chiana and of its bluish tones. The same tones can be seen in landscape backgrounds painted by Leonardo da Vinci who was familiar with Val di Chiana because he visited it in 1502 to develop a plan to reclaim its marshes. 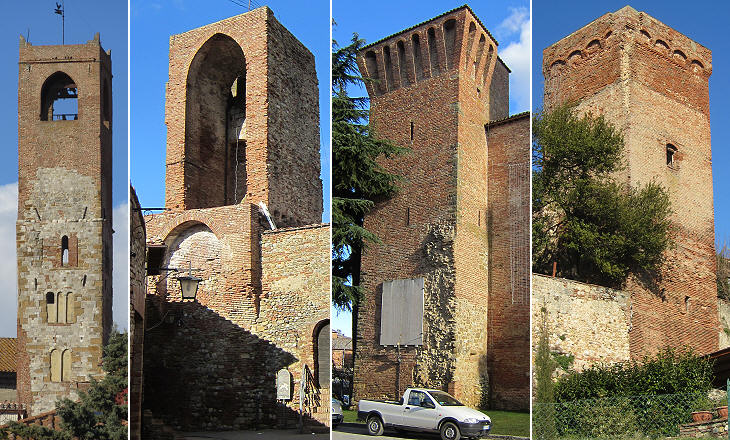 For a long time the town was known as Castello della Pieve because of its fortified aspect and a tower is the symbol of the town (it can be seen in the image used as background for this page). Torre Civica or del Pubblico was erected in the XIIth century and made taller in the XIVth century. It was the symbol of the attempts made by the inhabitants to establish an independent Comune (town-state). The Rocca is instead a symbol of the domination by Perugia as it was built in 1326 to house a garrison of that town.
Città della Pieve is a town of brick, rather than of stone as many towns of Central Italy are. This because it had several brickyards. In 1250, after a failed rebellion against Perugia, it was obliged by the latter to provide bricks for paving its main squares. 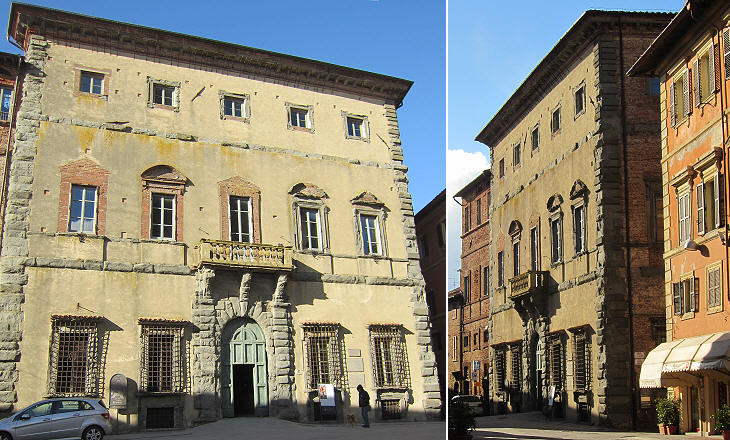 In 1550 Ascanio della Corgna was appointed governor of Città della Pieve by his uncle Pope Julius III. In 1555 Ascanio was removed from this position by Pope Paul IV, but in 1563 the town was assigned to him as a fiefdom in addition to Castiglione del Lago. In the following year however the inhabitants of Città della Pieve managed to return to the direct administration of the Papal State.

Although Ascanio della Corgna and his brother Cardinal Fulvio ruled Città della Pieve for just a few years they had time to build a stately palace which was designed for them by Galeazzo Alessi, an architect who had built the palace of Cardinal Tiberio Crispo at Orvieto following an initial project by Antonio da Sangallo the Younger. Notwithstanding its limited size the building has typical features of Renaissance palaces including a loggia. Unfortunately pietra serena, the light grey stone utilized for the frames of windows and doors, is subject to deterioration. The stone was much used in Florence. 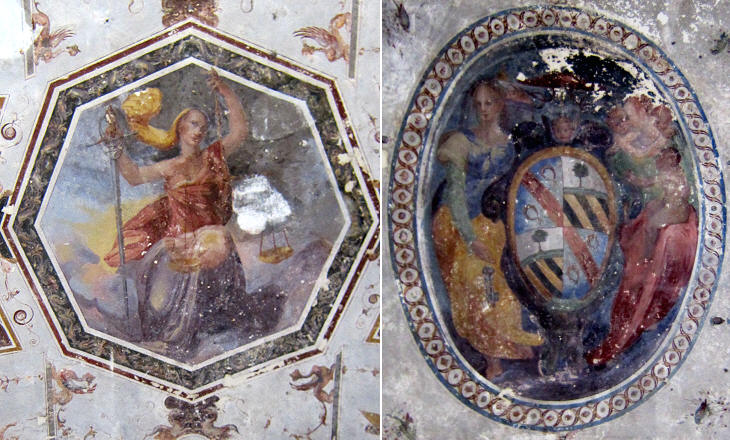 Palazzo della Corgna - frescoes by Salvio Savini, an assistant to Nicolò Circignani, il Pomarancio, a painter best known for his frescoes depicting martyrdoms: (left) Justice; (right) coat of arms of the Ciocchi del Monte (the family of Pope Julius III) and of the della Corgna

Cardinal Fulvio della Corgna completed the decoration of the palace in 1580 by commissioning Salvio Savini a series of frescoes. The building remained a possession of the della Corgna until 1643. It was bought by the City of Città della Pieve in 1975 and it now houses the Public Library and a small Natural History Museum. It would be difficult to find cleaner fields anywhere; one cannot see the smallest clod of earth; the soil is as clean as if it had been sifted. Wheat seems to find here all the conditions most favourable to its growth, and does very well.
J. W. Goethe - Italian Journey - translation by W. H. Auden and Elizabeth Mayer - Collins 1962.
In October 1786 Goethe passed through the Tuscan part of Val di Chiana on his way to Perugia and he was impressed by how well it was cultivated. Although at a much slower pace the Papal State made progress in reclaiming its part of the valley in 1733-1736. In 1780 a formal agreement was signed at S. Agostino between representatives of Leopold I, Grand Duke of Tuscany, and of Pope Pius VI to coordinate the complete reclamation of the valley. Città della Pieve experienced a period of economic development which led to the construction/renovation of several churches. 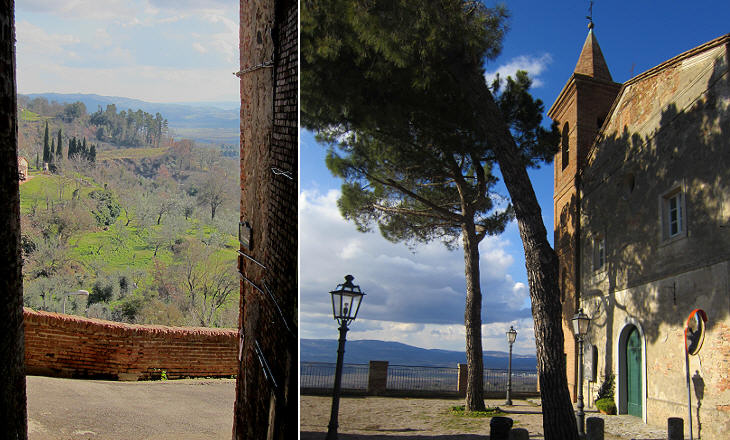 Other views of the countryside: (left) from a small alley; (right) from S. Pietro, one of the many "belvedere", sites/terraces with a commanding view, of Città della Pieve

The view from the door of this church over the vallev which separates the Papal States from Tuscany is very fine. Murray