If you came to this page directly, you might wish to read a page with an introduction to this section or Burckhardt's account of his visit to Jerash first. 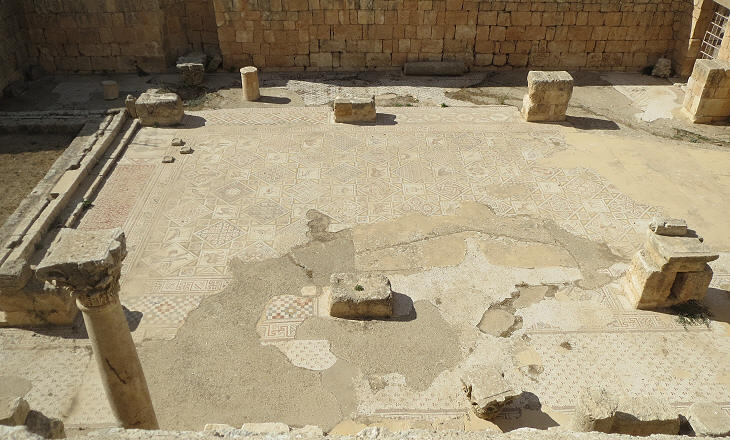 Burckhardt was not able to identify several churches of ancient Gerasa which were built in 529-533 with materials taken from the large portico which surrounded the Temple to Artemis because their floor mosaics with Christian symbols were covered with rubble.
Sts. Cosmas and Damian's is the largest of three adjoining churches near that temple. 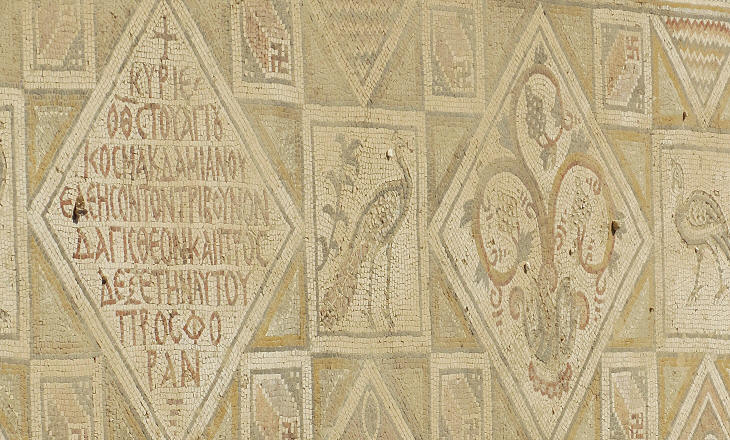 Sts. Cosmas and Damian's: detail of the floor mosaic with the dedication to the saints

The floor of the church was decorated with a complex mosaic which contained inscriptions with the name of the donors (similar to what can be seen in many early churches, e.g. at Aquileia), Christian symbols (e.g. peacocks), traditional geometric patterns including swastikas and elaborate decorations depicting grapes, a reference to the farming activities of the region. 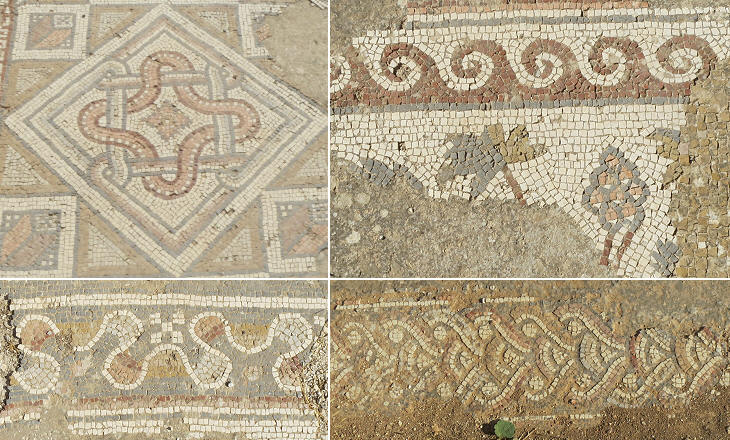 Details of the mosaics of the nearby churches

The adjoining churches of St. John's and St. George's retain only fragments of their floor mosaics (some of which have been moved to a small museum inside the archaeological area). They are very similar to that at Sts. Cosmas and Damian's. 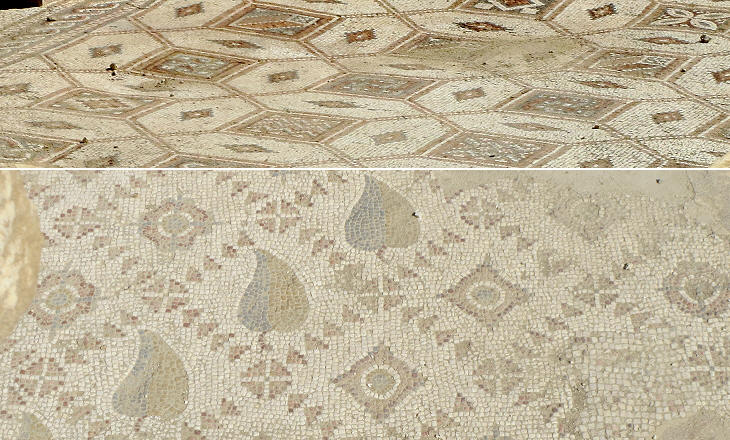 Church of Bishop Isaiah: details of its mosaics

In 559 a church was built between the Temple to Artemis and the Northern Theatre. Its floor mosaic is less elaborate than those of the three adjoining churches. This perhaps because of the economic crisis which hit the region as a consequence of a pestilence known as the Plague of Justinian which swept through the whole Mediterranean region in 541-542.

(left) Entrance to the Cathedral; (right) a fountain and behind it the apse of St. Theodore's

Two other churches have been identified along the southern side of the terrace of the Temple to Artemis. They were probably the result of changes made to existing temples. In particular the entrance to the Cathedral (built in ca 365) from Cardo Maximus is similar to that to the Temple to Artemis which is located at a few yards of distance.
St. Theodore's was built at the end of the Vth century at the back of an atrium of the Cathedral.
The construction techniques employed for the churches of Jerash were not as sound as those used for the pagan monuments of the town, because in most cases their walls have almost entirely disappeared. 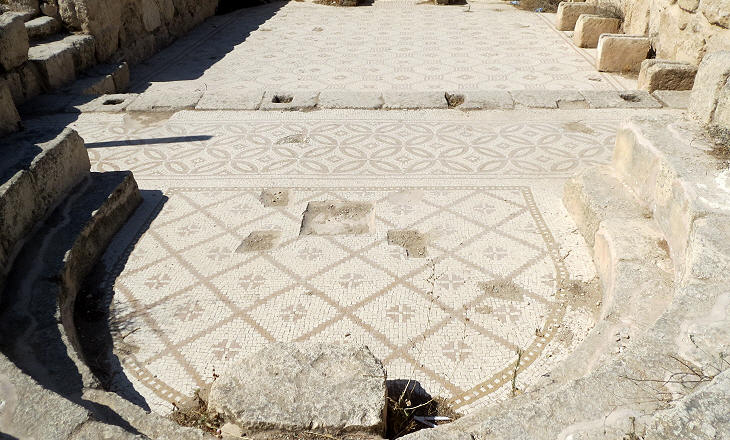 While most churches are grouped around the Temple to Artemis, that built by Bishop Mariano in 570 is situated near the Arch of Hadrian, outside the town walls. Its small size and its plain floor mosaic are another indication of the decline of the town in the second half of the VIth century. Museum of Jerash: fragments of mosaics: (left and right-below) acanthus scrolls containing subjects, similar to those found at Philippopolis and other locations in Syria; (right-above) depiction of Alexandria; it was found at St. John's. The image used as background for this page shows another mosaic at the Museum of Jerash

The final years of Gerasa were marred by a series of wars which disrupted the region. The Persians invaded it in 614, the Byzantines retook it in 629 and surrendered it to the Muslims in 636. In 747 or 749, a major earthquake caused the final abandonment of the town. You may wish to see the floor mosaics of churches at Madaba, Umm ar-Rasas and in Southern Lebanon.

Museum of Amman (inside the ancient theatre): VIth century mosaics from the church of Elias, Mary and Soreg (three donors) found in the eastern section of Gerasa, now covered by the modern town; the left mosaic is believed to represent the soul imprisoned in the body; see a similar one at Aquileia