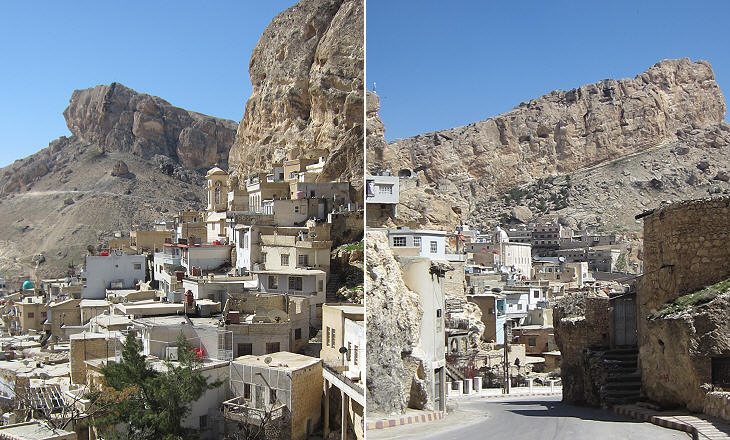 There is a way which goes along the plain for about four leagues to the north, and then turns up the mountain to the north west; and at the end of three leagues there is a village called Malouca, built on the side of a steep high hill, over a narrow valley; opposite to it, on the side of the other hill, is the Greek convent of Saint Thecla.
Richard Pococke - A Description of the East and Some Other Countries - 1745
The mountains, actually a tableland, are called Qalamoun and are part of the Anti-Lebanon range. Pococke was travelling from Damascus. Maaloula (the name means the passage, the gorge) is located at some 5,000 ft of altitude in a sort of natural theatre formed by high rocks; most of the inhabitants are Christians (belonging to various churches); until a few decades ago Aramaic was widely spoken and there are some recorded speeches in the language of Jesus Christ. 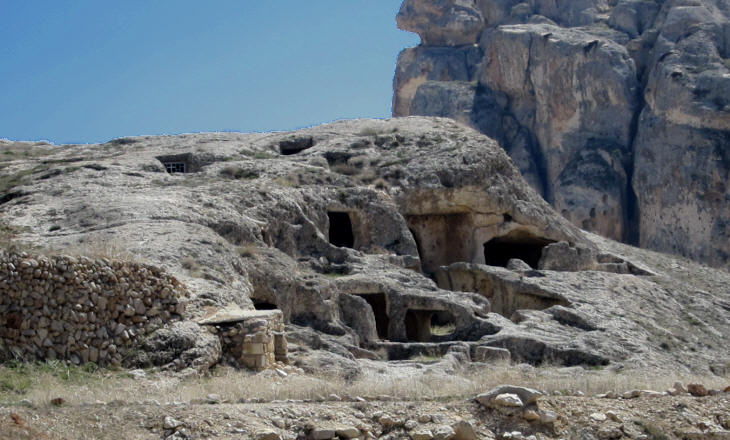 Houses cut into the rock

There are a great number of fine square grottos cut out of the rock, in many of them there are broad solid seats, like sophas, cutout at the further end; they have also several niches in them, as if they were designed for domestic uses; others, which are level, and about six feet high, have holes cut in the rock round the side of the room at the ceiling, as if horses were to be tied to them. I saw one cut out very regularly with a well in it, about ten feet deep, which had channels to it from all the parts of the grot; so that I concluded the use of it was to make wine: I found several others cut in the same form in a rough manner, which are now actually used as wine vats. It is difficult to say what was the original use of these grots, which are cut all down the gentle descent of the mountain westward to a sort of a vale which is between two summits of the mountain; the situation does not seem proper for any city; and I should rather think it was formerly a town of stone-cutters, who might supply some neighbouring cities with this fine stone, and in cutting it might form these grots. Pococke
The area of Qalamoun where the small town of Maaloula is located is characterized by high rocks which can be relatively easily carved to enlarge natural caves; this led to the site being inhabited at a very early stage. 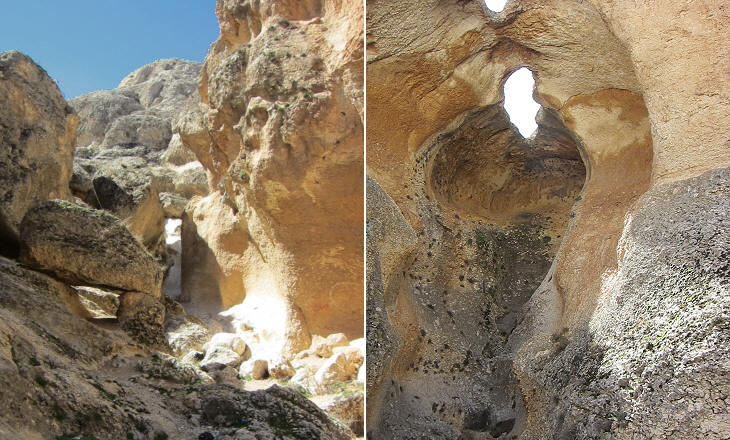 Cracks in the rocks

The rocks near Maaloula have many cracks which sometimes pierce them from side to side and allow the passage of men and animals; it is likely that the inhabitants of the town used them to escape in case of danger. 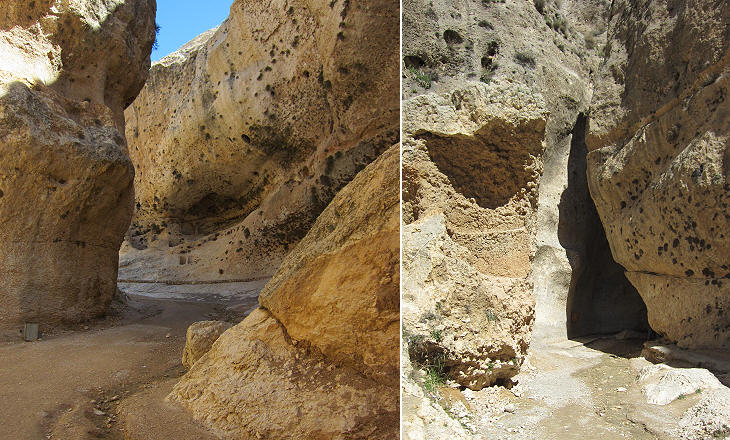 Al-Fajj, a long and narrow passage - 1

On each side of the mountain, at the end of this vale, there is a narrow opening in the rock, by which there are two passages up to the top of the hill, a small rivulet runs through the northern one, which rises on the mountain. From this source a channel is cut into the side of the perpendicular rock, which, without doubt, was designed to access (..) the higher parts of the town. Near the entrance into the other passage, between the mountain, there is a plentiful spring that flows out of a grott, to which there is a narrow passage. Pococke
The longest of these passages is associated with the life of Saint Thecla, one of the first followers of St. Paul. According to IInd century accounts she lived in the Anatolian tableland and she eventually died at Seleucia ad Calicadnus where a large basilica was built above a cave where she hid from her persecutors. 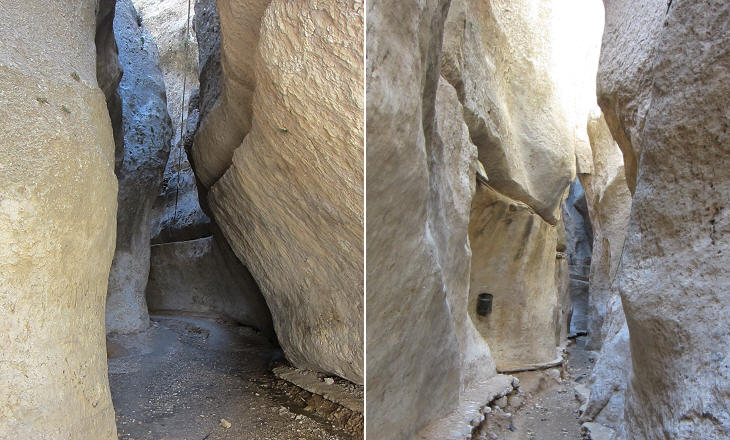 They have some history concerning the passage, that relates to saint Thecla's flying to it to hide herself; at which time, they say, a fountain rose there. Pococke
A similar account developed around a cave in Maaloula where the saint was helped to escape from her persecutors by the miraculous opening of a crack into the rock. In the centuries which followed the Arab invasion of Syria, the Christian communities of Qalamoun lived in isolation and they probably relocated popular events which had occurred elsewhere to their own environment. 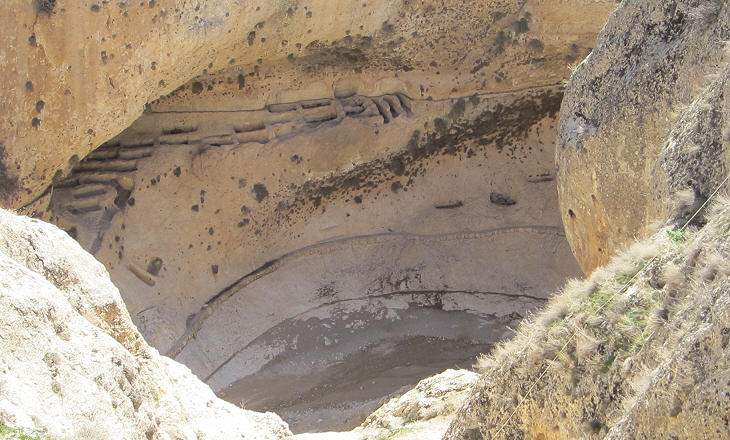 In the perpendicular parts of the rock before mentioned, there are several sepulchres for single bodies in a very particular manner; a semicircular niche being cut into the rock, and the bottom of it hollowed into a sort of a grave to receive a body; these are in several stories one over another. Pococke
The long and sometimes very narrow passage became a holy site and many tombs were carved into the nearby rocks. 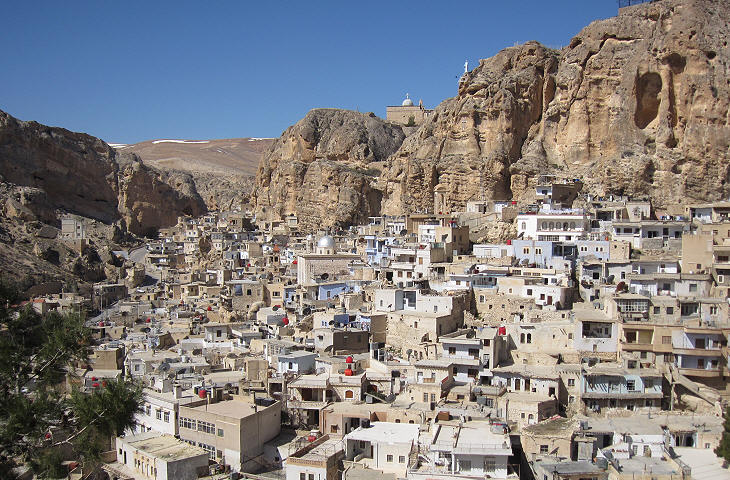 View of Maaloula towards Sts. Sergius and Bacchus monastery (from St. Thecla's convent); for a somewhat similar landscape you may wish to see Kandovan in Persia

In the town of Malouca there are two churches, one of the Greeks, the other of the Roman Greeks, there being several here of that communion: There is only one monk in the convent, who lives in a cell built below the grot. After the Feast of Holy Cross, the Greeks from Damascus come out to this convent. Pococke
The two main monasteries of Maaloula are located at the opposite ends of the small town; Maaloula enjoys some wealth from being visited by believers who remain for an extended period and who are attracted by the town's religious tradition, by the past usage of Aramaic and by a very evocative landscape. 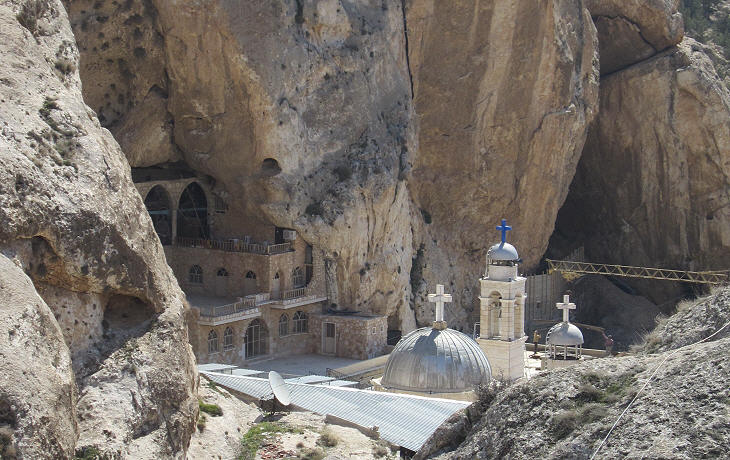 There is a large grott, open to the south, in which they have built a small chapel; and at the east end of the grott there is another, in which the place is shewn where St. Thecla suffered martyrdom: She was the disciple of St. Paul, according to the legends, and fled to this place from her infidel father: her picture is in the niche where, they say, her body lies. There is a Greek inscription on it, signifying, that she was the first martyr of her sex, and contemporary with the apostles. At one corner of the grott there is a bason, which receives a clear water that drops from the rock; and, they say, that it is miraculous both in its source and effects. Pococke
A large and mostly modern Greek Orthodox convent was built near the cave where the saint lived and where holy water drips from the vault; it is interesting to note that the faithful have to remove their shoes to enter the cave; it is a Muslim practice which has been adopted by the local Christians; the image which appears in the background of this page is based on a modern portrait of Saint Thecla. 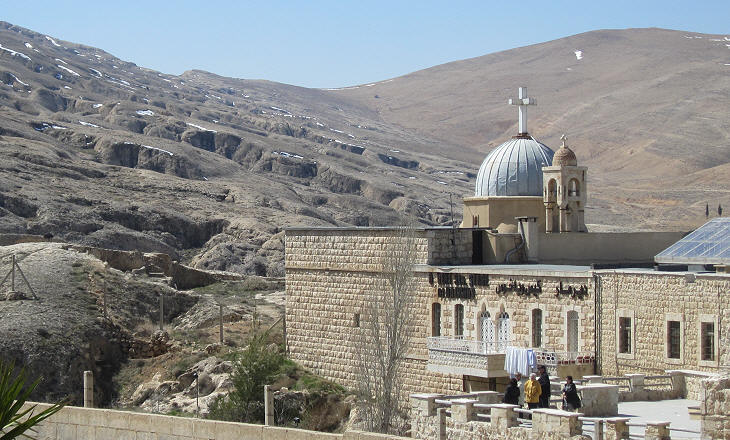 Sts. Sergius and Bacchus' and in the background the Anti-Lebanon Mountains (while today these mountains and Qalamoun are rather barren, in antiquity the former were covered with cedar forests and the latter was farmed)

On the top of the mountain is the convent ot saint Sergius; it is ill built and uninhabited, but there is a tolerable church belonging to it. Pococke
The monastery of Sts. Sergius and Bacchus is regarded among the oldest ones on Earth; the analysis of its logs indicates that they were cut 2,000 years ago; the original building however is encased in a modern construction and the icons in the interior are not very old; the altar instead has probably a pagan origin or it was designed having in mind pagan altars. 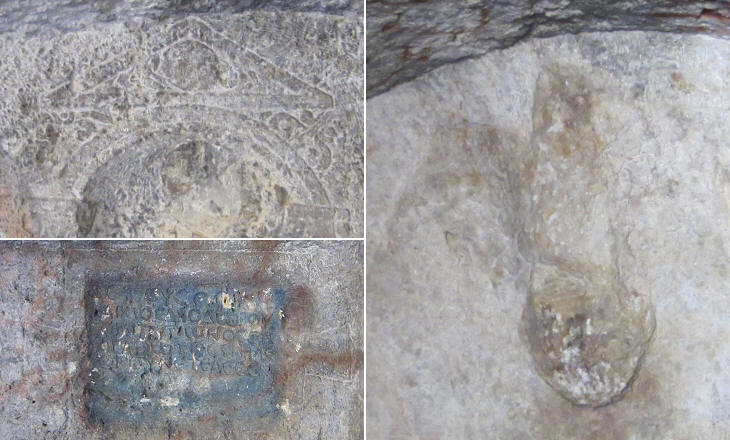 A small temple to the sun cut into the rock has been discovered a few hundred yards from the monastery.