You may wish to see an introductory page to this section or the pages on the Forbidden City first.
The Lama Temple built before 1722 as the palace of the later Emperor Yung-chung, is the largest Lama temple in the city and the dwelling-place of a "living Buddha" (not accessible to visitors). The gates and other fine architectural features are well worthy of notice; so, too, are the Temple of the Great Buddha, with a wooden statue 75 ft. high, and the Hall of Prayer, where the traveller may have an opportunity of seeing the Lamas at their devotion.
Karl Baedeker - Handbook for Russia with Teheran, Port Arthur and Peking - 1914 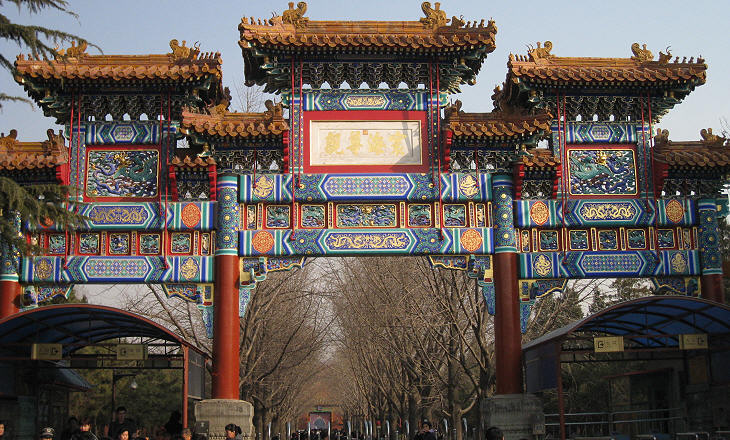 A visit to the Buddhist Tibetan monastery of Beijing provides an interesting insight into the resurgence of religious feelings in today's China and in the historical bonds between this country and Tibet. The series of buildings which constitute the monastery were built as residences for the court eunuchs; this occurred in 1694. A few years later they became the palace of Prince Yong, who in 1722 became Emperor Yongzheng. During his reign the Chinese intervened in a civil war in Tibet and this led to the establishment of a relationship which supports the Chinese claim of sovereignty over Tibet.
In the frame of this relationship Emperor Yongzheng assigned part of his previous residence to Tibetan lamas (monks or spiritual teachers). Eventually the whole compound became a monastery under the protection of the emperors (for this reason the tiles of the roofs are yellow, the colour of the emperors). 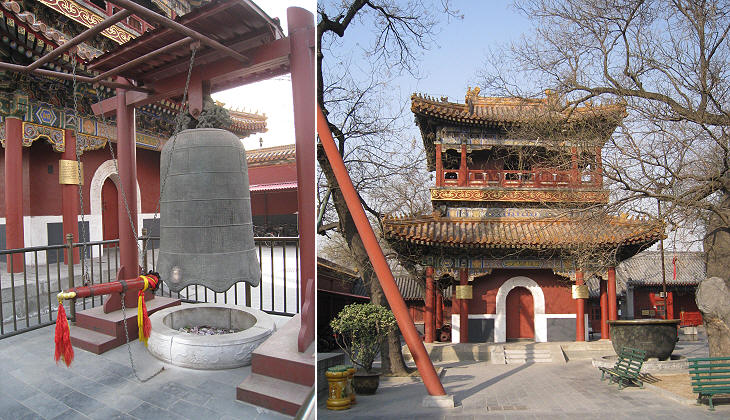 In the frame of the atheist policies pursued by the Communist government during the so-called Cultural Revolution (1966-1976) the monastery was closed and abandoned; the finely decorated portals at its entrance are a modern (concrete) reproduction of the original timber structures. In the late 1970s power in China was taken by pragmatist leaders who rejected the excesses of the Cultural Revolution and halted the destruction of the country's historical and artistic heritage. In 1981 the monastery was restored and monks were allowed to return. 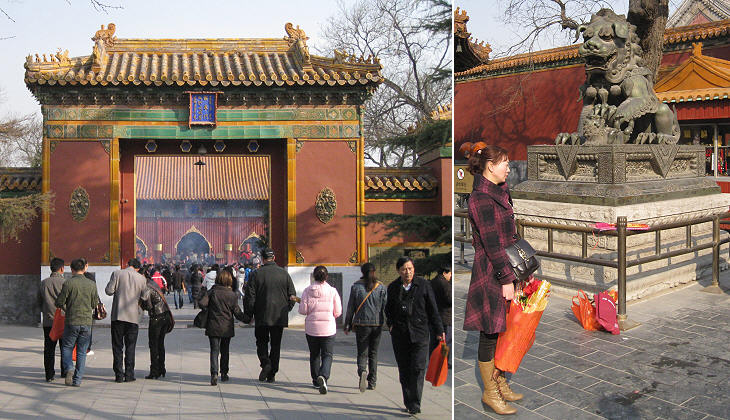 In the Chinese calendar months are based on the cycle of the moon; they begin with a dark moon night; days of dark or full moon are considered more appropriate than others for visiting a monastery, praying and making offerings. 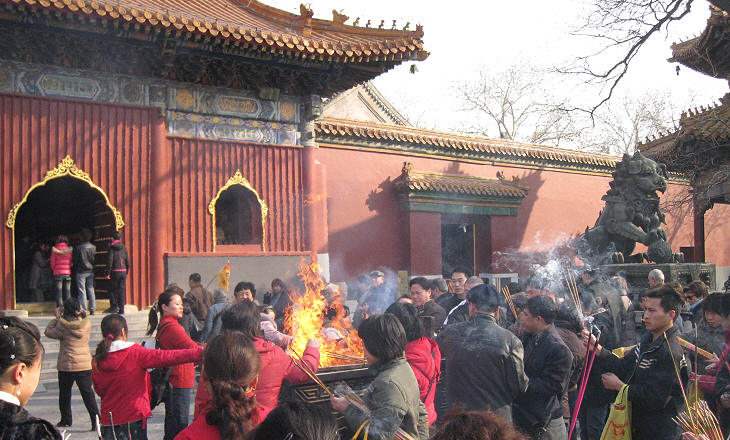 The Buddhistic worship consists mainly in meditation, the repetition of formal prayers and to bloodless sacrifices to numerous idols. Baedeker
Joss sticks are a sort of combination between a candle and incense; they are thin sticks of a fragrant substance which is burnt as incense. Lighting candles and burning incense are part of Buddhist ceremonies, but the ritual followed by many believers at this temple is influenced by Taoism; they raise three joss sticks slightly above their head to form a trident (this is a reference to the sanqing, the three major Taoist deities); then they close their eyes, pray and at the end bow; this is done three times and the number nine is a reference to the nine Taoist deities, popularly known as the Nine Emperors. 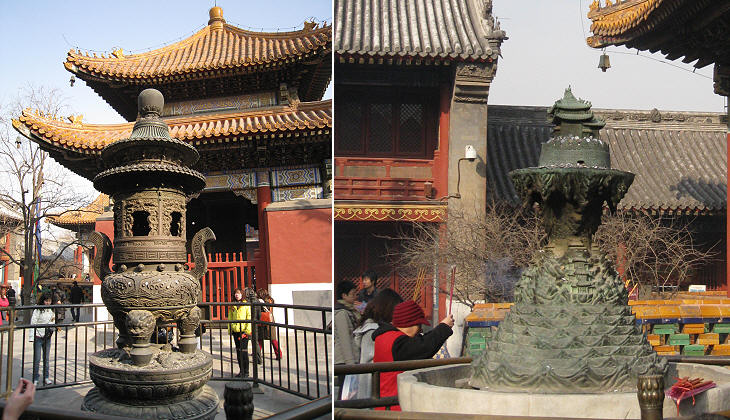 Offerings to the monks: coins

In Rome you toss a coin in Fontana di Trevi to propitiate another visit to it; at this monastery the Buddhist practice of almsgiving which is meant to unite lay and religious members of the community, has an unusual variation. By tossing their coins inside the holes of the incense burner or on the top platforms of a bronze sacred mountain, believers gain credits of some sort. 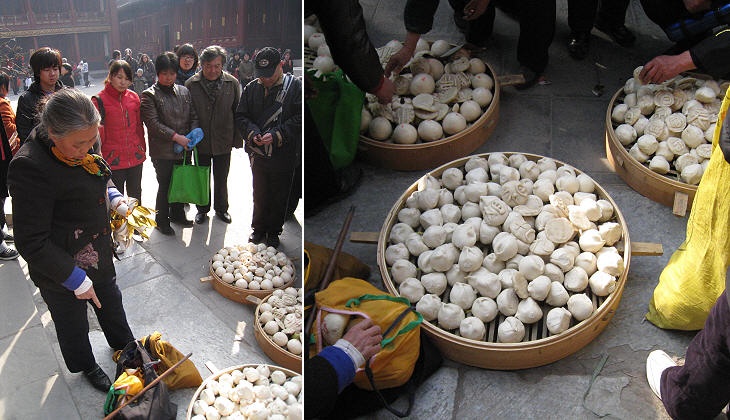 Offerings to the monks: jiaozi

Jiaozi are a kind of dumpling; they are similar to Turkish manti and Italian ravioli. They can be filled in many different ways and are prepared for the Chinese New Year festivities and other important occasions. In the past they were a luxury food. The shape of the jiaozi represents a juanbao, a small metal ingot which was used as money in ancient China: so jiaozi are a symbol of wealth and prosperity; some of them are decorated with words conveying good wishes. 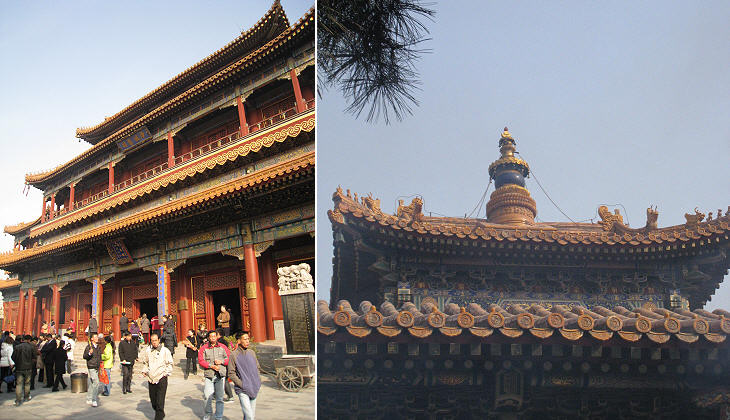 (left) Pavilion of Infinite Happiness; (right) detail of a roof

From an architectural viewpoint the complex of gates, courtyards and halls is very similar to the Forbidden City (on a much smaller scale). Feng shui rules are complied with in the orientation of the complex which originally was an imperial residence.

The decoration of the monastery is not very different from that of the Forbidden City with many dragons and guarding lions here and there; an unusual aspect is given by a few Sanskrit words painted several times on the beams of the halls where the monks have their meetings. Sanskrit is the liturgical language of Buddhism and of Hinduism.