"..the aggressive and fast driving in the city makes it one of the most dangerous places for the pedestrian." (Preface to Rome and environs - Blue Guide - 1978). The traffic of Rome used to leave a strong impression on many foreign travellers: the recent expansion of pedestrian areas has in part restored the pleasure of a walk through Rome. But how did the traffic fare in Rome in the XVIIIth century? the etchings by Giuseppe Vasi provide an answer to the question. 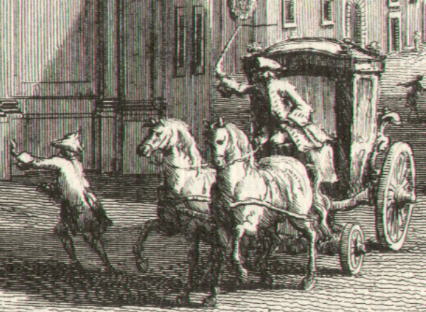 A narrow escape in Via dell'Umiltà

"Aggressive" driving was common also in the XVIIIth century. The image shows a coach coming down at some speed from Palazzo del Quirinale, maybe carrying an important member of the papal court.

Road accidents are known to attract a large TV audience: viewing somebody else's car damaged seems to please many people. Maybe this sentiment was known by Vasi who showed the sudden failure of the axle of an elegant coach.

The poor security of Papal State roads was a recurring topic in the accounts of the foreigners who visited Rome. However some of the brigands were seen as a sort of Robin Hood and Stefano Pelloni who terrorized many towns in Romagna in the XIXth century was called il Passator Cortese (the Fair Ferryman) for his purported courtesy during the robberies. This explains why the long distance coaches leaving Rome were manned with several servants and had a man riding the first horse to immediately notice a possible threat. 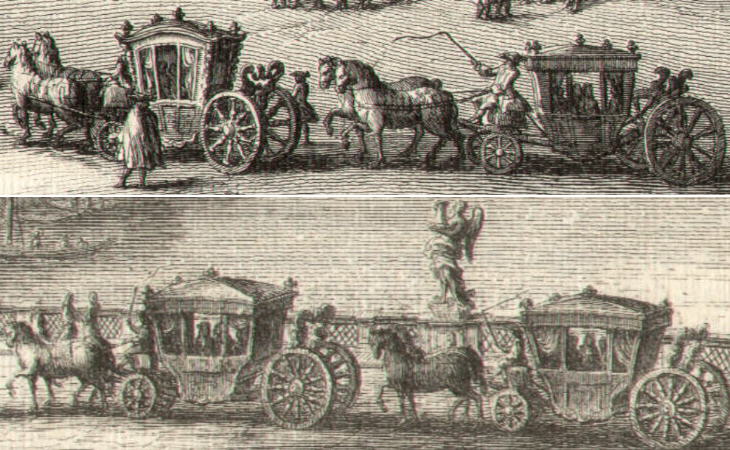 A luxury carriage was no doubt a status symbol. Princess Altieri was known for going to mass to il Gesù in her carriage, although Palazzo Altieri was just opposite the church. The rich enjoyed showing off on their decorated carriages. President de Brosses who visited Rome in 1739 could not understand why the Romans liked so much to promenade inside Rome in a queue of carriages, in spite of the heat and the dust. Notwithstanding this comment he immediately hired with his three friends two coaches and was pretty proud of parading in Via del Corso (lettre XXXVII).

....and in Piazza Navona

In summer there was a variation to the usual promenade. Piazza Navona was flooded to obtain a sort of pool where the wheels of the carriages provided welcome showers.

Other contributors to the Roman traffic

The etchings by Vasi shows other contributors to the Roman traffic. Sedan-chairs in my mind are associated with secret meetings, although this sedan-chair near Spedale di S. Spirito was most likely carrying a sick person. While Via del Corso was reserved for the rich, the streets of more commercial quarters (the image is taken from the view of S. Apollonia in Trastevere) were busy with carriages loaded with food and other commodities. Very few gentlemen used to ride a horse to move around in Rome. The examples shown by Vasi often concern soldiers (see plate 172 Spedale di S. Giovanni in Laterano).