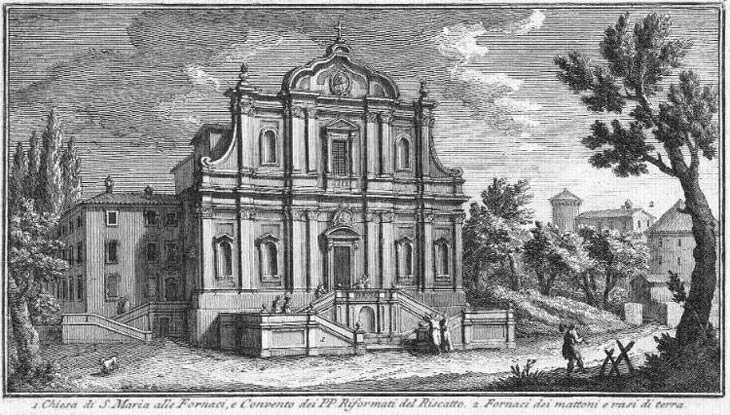 Fornaci means kilns; several kilns were located outside the walls surrounding the Vatican because their bricks were used for the construction of Basilica di S. Pietro; the full name of the monastery and church shown in this 1756 etching by Giuseppe Vasi is S. Maria delle Grazie alle Fornaci; because another church by the same name was located in Borgo the reference to Fornaci was necessary to distinguish them. The plate shows in the background a round tower inside the Vatican walls.
The view is taken from the green dot in the 1748 map below. In the description below the plate Vasi made reference to: 1) S. Maria alle Fornaci; 2) Fornaci dei mattoni (brick kilns). The map shows also 3) S. Angelo alle Fornaci. 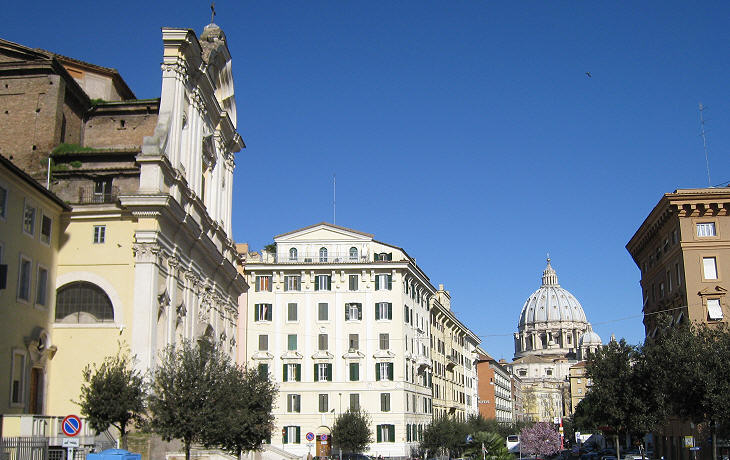 The area around S. Maria alle Fornaci was developed in the XXth century and high apartment blocks have replaced the kilns; by observing the church from an askew position it is possible to include in the view the dome of S. Pietro.
The church and the adjoining monastery were not affected by the 1849 fights which occurred off Porta Cavalleggeri during the defence of Rome by Giuseppe Garibaldi; the exchanges of artillery fire led to the destruction of S. Angelo alle Fornaci, a small parish church for the families of those who worked at the kilns, which was located near Porta Fabrica; in 1850 S. Maria alle Fornaci became the parish church for the neighbourhood and it still retains this function. 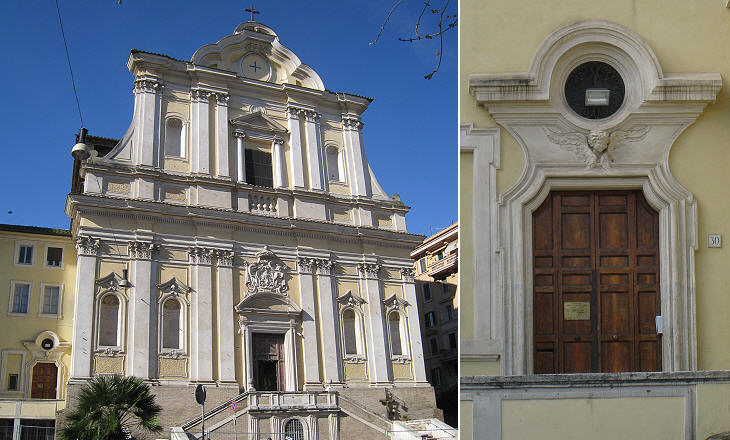 The construction of the church started in 1694 and the façade was completed in 1727; it is generally attributed to Filippo Raguzzini; its design is evocative of Francesco Borromini's Oratorio dei Filippini. It is not clear why a remote and unprotected location was chosen for building such a large church; the original plan included a dome which was never completed. In the XXth century a bell tower in line with the style of the church was built at the side of the apse. 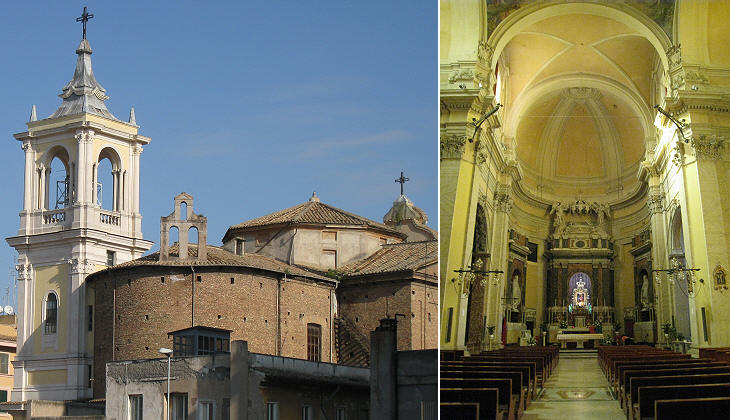 (left) Stucco decoration above the entrance; (right-above) inscription on the balustrade; (right-below) symbol of the Discalced Trinitarians on the floor; red indicates the divine nature of Christ and blue the human one

The Trinitarian Order was founded in 1198 by Sts. John of Matha and Felix de Valois; the latter is portrayed in the image used as background for this page which is based on a painting by Onofrio Avellino inside the church. The purpose of the Order was to ransom Christians who had been captured and sold as slaves in Muslim countries. The first premises of the Order in Rome were located at S. Tommaso in Formis. The Order knew a period of great development towards the end of the XVIth century when Ottoman corsair raids along the Mediterranean coasts and attacks on ships greatly increased the number of Christian slaves; the corsairs' threat gradually subsided, but it was still significant in the early XIXth century (what happened in 1805 to Antonietta Frapolli, an Italian lady sold to the Bey of Algiers, provided the plot for Rossini's Italiana in Algeri). Today the mission of the Order is more generically that of assisting those who suffer hardship.
Other monasteries of the Trinitarians in Rome were located at S. Carlo alle Quattro Fontane, S. Dionigi Areopagita (lost), Chiesa della SS. Trinità in Via Condotti and S. Grisogono.